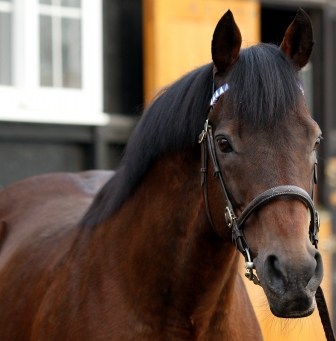 A couple of weeks ago, I began thinking about this article and was trying to work out what I was going to research in terms of content and subject matter, writes Jon Shenton. For quite a while I’ve felt that it’d be interesting to evaluate prolific sires whose progeny train on (or otherwise) from the age of two to three. I started work by “messing around” on Query Tool (I believe that’s the most accurate description of the activity) trying to determine whether the data were material enough to construct an article from.

As I explored, a part of the data jumped out at me, exhibiting something that I hadn’t really considered previously. I wasn’t quite sure if it made sense, and to some extent I’m still not, but the more I think about it the more I think there is a possibility that it is underwritten by a degree of discernible logic.

I’m talking about the so far unconsidered and unheralded angle of trainer / sire combos!

Before you start sniggering, let’s work this through. Many of us consider trainer/jockey combinations a cornerstone of punting. Nothing wrong with that, I love a good old review of TJ combo data as much as the next man or woman.  But why would trainer / stallion be any less relevant? After all, the bloodline is essentially the raw material that a trainer crafts, shapes, develops and races. You could argue that if a trainer has expertise with a specific bloodline or stallion, they may have an edge on knowing how to get the best from those related animals; or that prior success leads to the acquisition of similarly bred horses.

I realise this may sound fanciful, but for now we ought to suspend any such reservations and see what can be unearthed.

The data utilised in the article are restricted to horses running at the ages of two or three, the rationale being that generally racecourse evidence will take precedence over breeding as a primary indicator of performance in older horses. Of course, there may also be merit in looking at the more experienced cohort but that’s for another day.

Starting with a broad-brush the below table shows simply the stallions that are ubiquitous in flat turf racing. The dozen detailed in the table below have accounted for over 24,000 runners since 2012.

There is one name on the list that stands out like my thumb after a rare and clumsy day of DIY, Dubawi. The Darley Stud resident checks in with a current price tag of a cool £250,000 per covering, which is the third most expensive in the world (behind Galileo and Deep Impact). His progeny reads like a hall of fame with a monumental 38 Group 1 wins. Current leading lights include Too Darn Hot and Quorto, ably supported by Benbatl, Wild Illusion, and Kitesurf in terms of recent G1 victories. 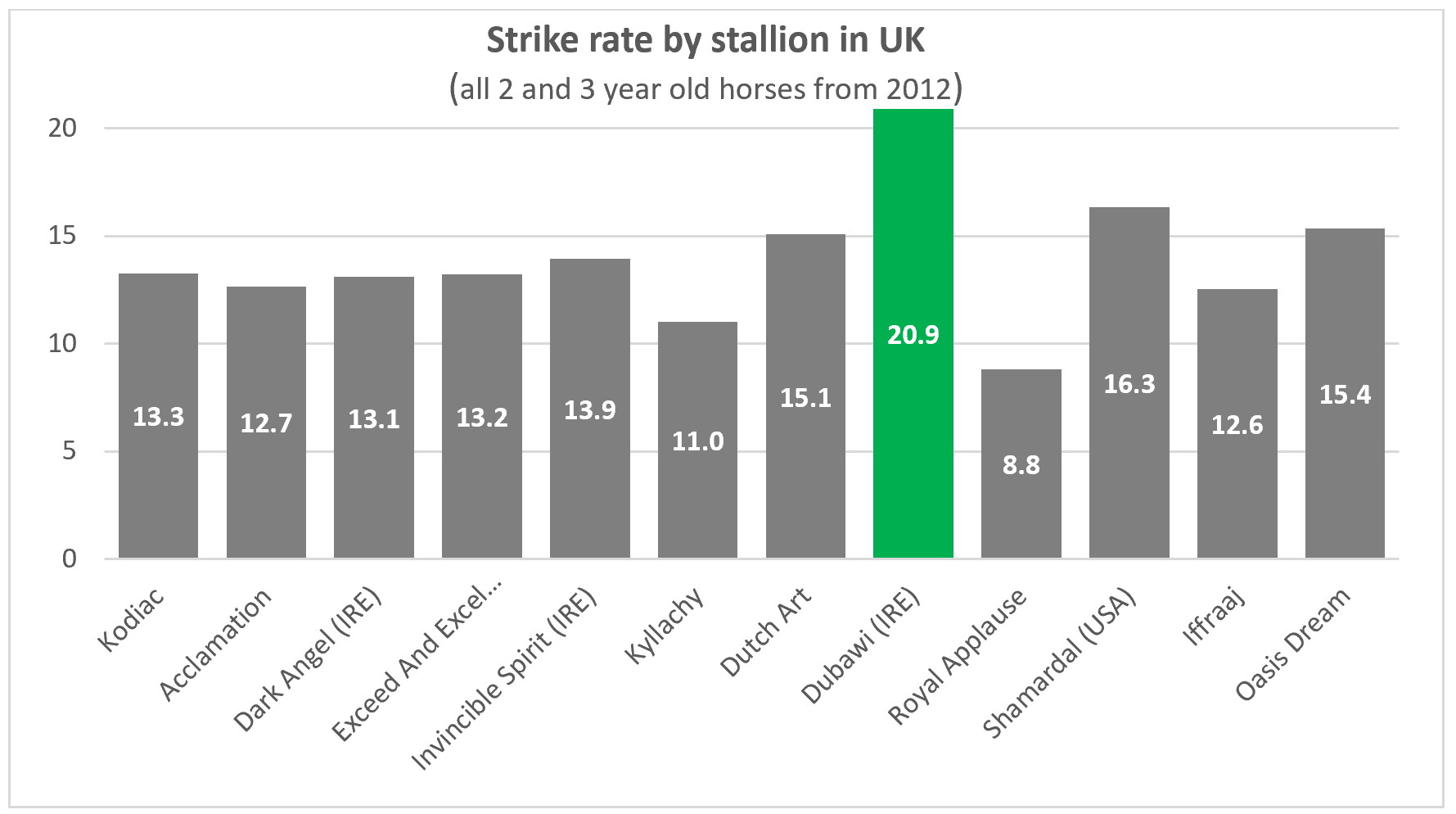 The graph above is very simply the strike rate of Dubawi stock in comparison to the other prolific stallions contained in the table.  Performance is significantly higher than the others, nearly 5% ahead of his nearest rival, Sharmadal.

If you’d backed every 2&3-year-old Dubawi runner over the last 7 summers at SP you would have yourself a tidy 7% profit which, quite frankly, seems ridiculous. It casts any cash ISA onto the naughty step in comparison (1.45% easy access, 2.3% fixed were the best I could find if you’re interested!).  Incidentally, just for the avoidance of doubt, the small print states that in no way am I advocating a Dubawi investment fund as a tax-free alternative to an ISA...

In terms of TS combo the table below shows Dubawi’s by trainer:

No huge surprises in where the majority of Dubawi offspring end up plying their trade. The boys in blue take the lion’s share of the animals, particularly Charlie Appleby.

There is without doubt promising data contained therein. As you’d expect, an elite stallion’s progeny in the hands of elite trainers results in elite level performance (aside from perhaps the Varian operation based on this intel). The non-Godolphin duo of John Gosden (who does inform buying decisions for Godolphin) and Sir Michael Stoute stand out a little though. Key data items of A/E, win% and ROI all point towards further investigation.

The baseline performance of 44 wins from 148 runs, A/E of 1.15 and a SP ROI of 42% may well be good enough, but it’s always worth examining in more detail to establish if we can find any legitimate enhancement.

A logical starting point of refinement with this data is by horse age. We might expect with Gosden better 3YO numbers than the 2YO equivalent, given his general focus on the Classic generation. The numbers in the table below support that.

At first glance it would seem to make sense to sharpen the focus by building the angle around the 3-year-old’s only, that would be a very reasonable approach.  However, in this case there may be another factor that could be of equal, if not greater, importance.

We know that in general terms Gosden is not a renowned trainer of sprinters so it would make sense to check the profile of these 2 and 3-year-old animals against race distance. 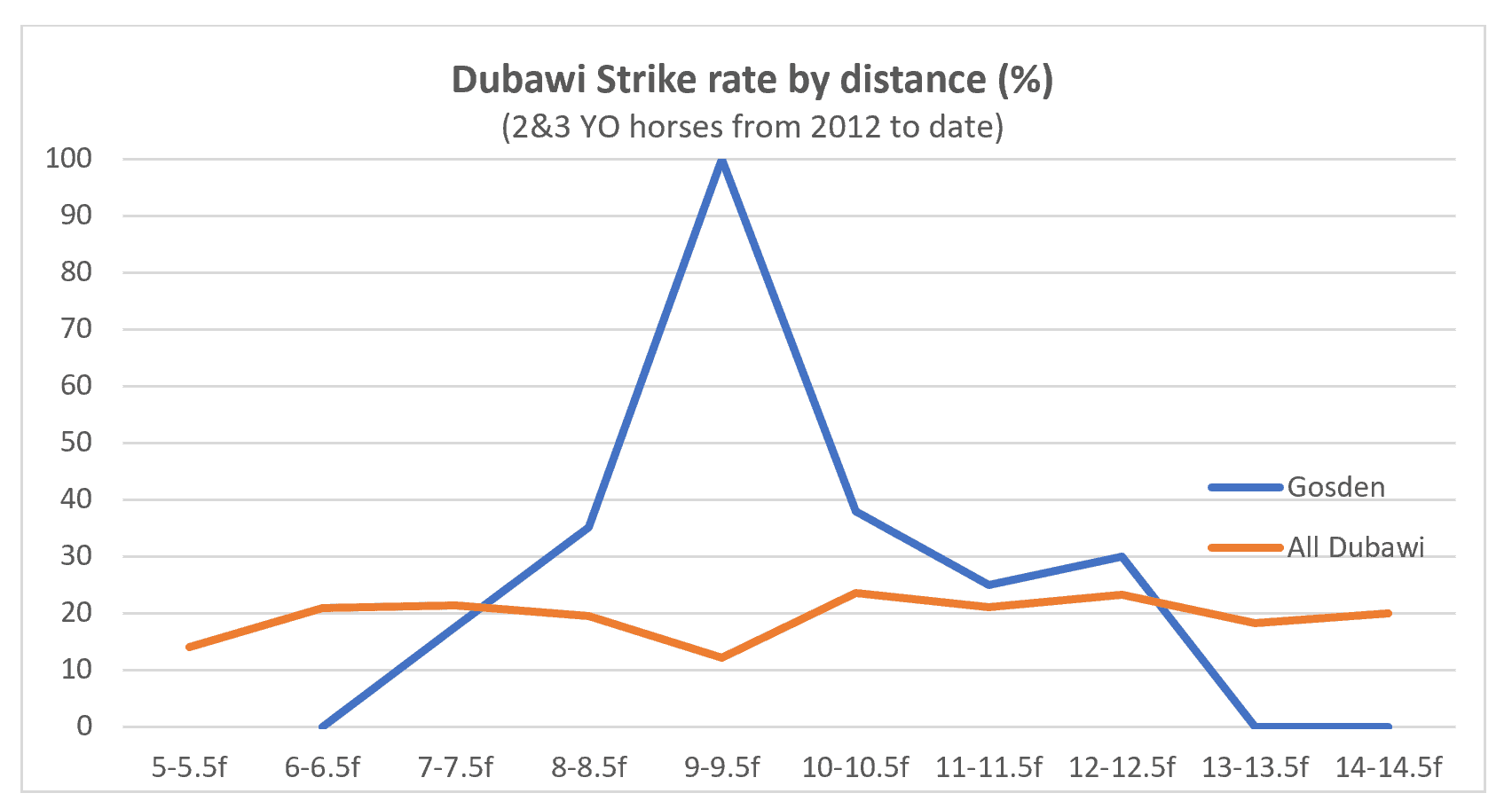 The graph above shows the average strike rate by distance of Dubawi progeny (orange line), which is pretty consistent across all distances. A Gosden-trained Dubawi, however, appears to underperform versus the average at distances up to a mile; but, from that 8-furlong distance up to 12.5 furlongs, Gosden strike rates are roughly 10-15% greater than the overall Dubawi benchmark (the unhelpful spike of 100% for 9-9.5f is derived from a perfect 1/1 record at that distance so can be discounted as meaningful data).

Taking only these races of a mile up to an extended mile and a half the table below illustrates the annual performance:

For me, using distance rather than age is a better approach in this case. It’s a subjective call though. Gosden’s mastery of middle distances feels instinctively more important than the age of the horse but it could certainly be cut both ways.

I’ve included both factors individually in this article to try and share some of the thought processes and considerations I use when inching towards data-driven conclusions. It’s seldom that I take a linear approach to building an angle and I always check several factors to try to work out what is driving it and then make a call accordingly.

As a final call-back here are the 108 runners across both age bandings at those key distances of 8-12.5 furlongs. Clearly Johnny G Is peaking with the classic generation but to throw out all 2YO’s based on the higher-level data could be an erroneous conclusion to reach, especially on a small sample.

Back John Gosden 2 or 3-year-old runners sired by Dubawi at race distances of 8-12.5 furlongs inclusive, or all 3YO Gosden Dubawi runners if preferred

Secondly, let’s address the subject of the TS Combo of Stoute/Dubawi (so much for my usual focus on the smaller underdog operations!). With 15 Classic wins and 10 Champion Trainer awards there aren’t too many unknowns when evaluating Sir Michael’s imperious record on turf.

Starting with horse age again makes complete sense. It’s probably edging into cliché territory regarding Stoute’s famously patient approach to the training of thoroughbreds, but it would be expected that the older grouping demonstrates stronger performance than the juveniles.

Sure enough, in this case it certainly appears as though the numbers support the view that a slow and steady progression is the preferred mode of the stable. Unlike with Gosden, I’m not motivated to search for something in the 2YO grouping. 3 wins from 25 tells its own story and as a result I’m content to leave a Stoute juvenile alone.

Again, SMS is generally not a trainer associated with the sprint division.  Splitting Dubawi 3YO progeny performance paints the picture below.

The data contained in the red box are of great interest: 39 runs, 19 wins, A/E 2.04 and ROI of 94% to SP, albeit on a small sample size. This could be construed as a nano-angle as micro seems too grand for it in terms of scale, but the statistical basis of it is sound enough.

In very specific terms Stoute had three 2YO Dubawi offspring making their racecourse debuts in 2018: Karnavaal, Calculation and Vivionn. I doubt very much that we’ll see huge prices on them when they race at three years of age, but they’re in my tracker and if they run between 10-12.5 furlongs during 2019 they’ll certainly be of interest.

Back Sir Michael Stoute 3YO Dubawi runners between 10 and 12.5 furlongs inclusive

So, where does that leaves us in terms of trainer/sire combinations? In Formula One, the best cars generally are piloted by the best drivers; as a result they win with almost tedious regularity. I suppose calling out Gosden/Stoute & Dubawi is not hugely left-field and maybe isn’t dissimilar to asserting that Mercedes/Hamilton will perform well in the predictable world of F1. Not that backing that F1 combo will lead to a profitable outcome, their dominance heavily factored into the market.

I feel the data are very interesting and that there is at least a modicum of logic supporting this route in. After all, as stated earlier, the raw materials of the racing game are provided by the bloodlines of the animals, trainers can only work with what’s there already and if premium stables are working with exceptional bloodstock that surely must be a positive? The only real surprise may be that their appears some value in the market for these high-profile trainers and benchmark stallions, at least hitherto.

Finally, by way of wrapping up the TS Combo subject I’d like to share a bigger data table showing the raw info of the most productive combinations in terms of A/E from 2012 onwards (75 runs to qualify). I did check the stand out Dalgleish/Kodiac axis but the number of qualifiers in 2018 was low (only 2) so it’s one to keep a watching brief on. Clearly there is further research to get stuck into if you are so inclined – do share if you go down that route, and thanks! 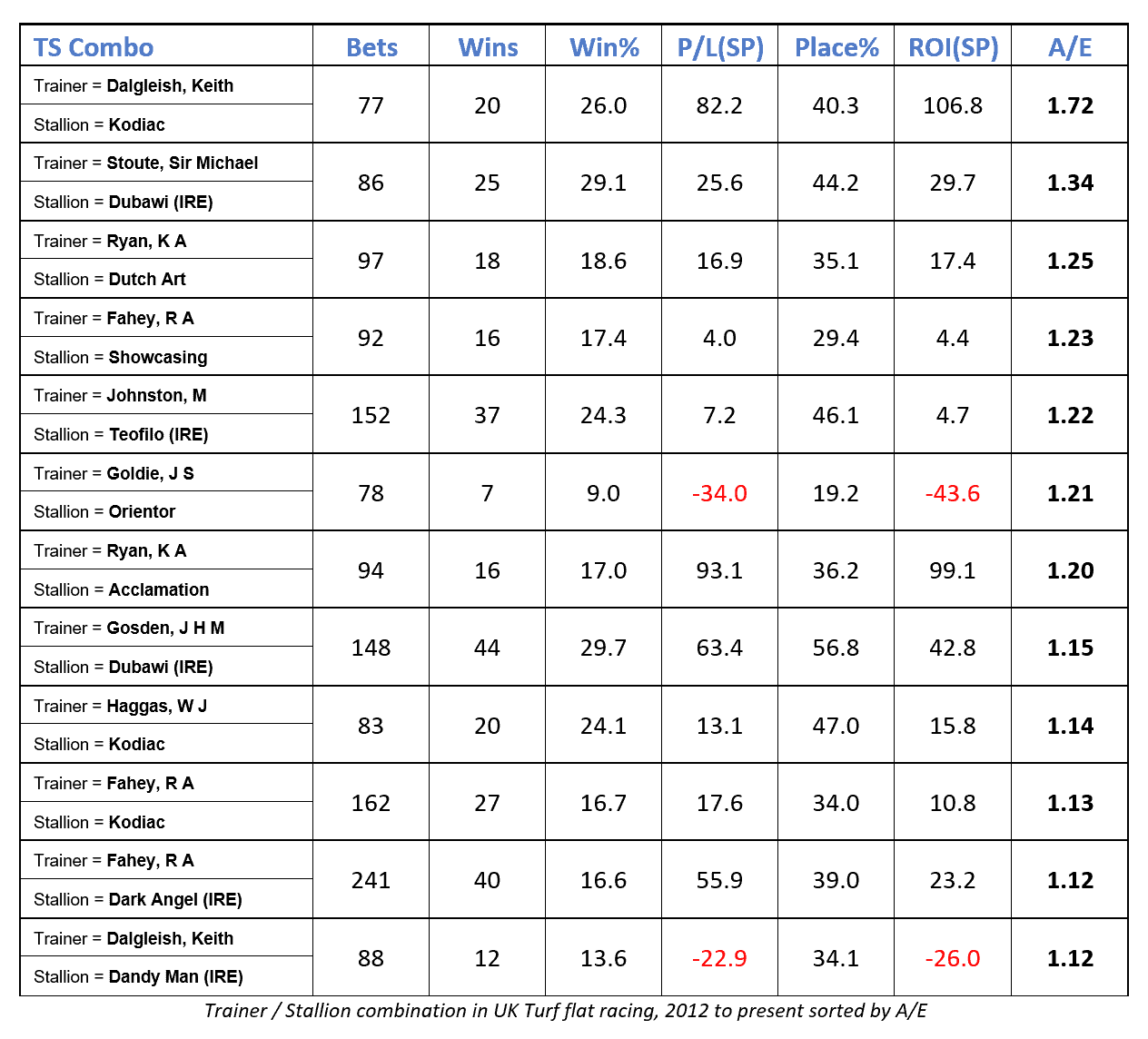