It's that time of the year, of the decade, when retrospectives are all the rage. So, while I appreciate you've probably had more than your fill of such self-congratulatory mush in recent days, what follows will add to the pile. For regular readers who have joined at any point after 2010, there may be some interesting factoids in the below.

geegeez.co.uk first saw the light of day in August 2008, as a one man - me - blog. Now, more than eleven years later, I still drive the bus, though with co-pilots, mechanics and conductors aplenty. This remains a boutique site, it remains funded by your Geegeez Gold subscriptions (as opposed to bookmaker revenue share, which is a different model from basically every other major racecard/form provider), and it remains privately owned with an ethos that focuses on you, our loyal reader/subscriber, rather than 'shareholder value'.

Right, self-righteous back-slapping out of the way, on with the show...

Before the decade began

As mentioned, geegeez.co.uk actually began life in the second half of 2008, when we were all a little younger and faster. It looked very much like this, and sat - for those of a vaguely techie nature - on google's blogger platform. High art it was not...

Moving on, and the first of many failed cosmetic enhancements was applied in early 2009. The site retained this look at the beginning of the decade, having now moved from blogger to WordPress which, ten years later, is the de facto platform for such content hubs and used by the likes of cnn.com.

The red, white and blue banner was in situ at this point but the site remained a blog funded by affiliate commissions from products we reviewed, as well as those sold ourselves such as Trainer Track Stats.

By July 2011, there had been another facelift - things were looking a lot more professional now - and we also had a small team of writers including Ross Birkett (amateur jockey and assistant trainer to his mum, Julia Feilden) and Mal Boyle, the placepot guru.

On reflection, that front page looks better than the current one - a job to be addressed early in 2020! - and the box bottom right hints at a change in direction for the site towards what you currently know and, hopefully, love.

Inexplicably, to me at least, the previous look failed to appeal to site users, so we reverted to linking from the home page to bundles of content. At this time, Ian Sutherland was writing news articles as well as some 'what's in a name' insights on horses and lost racecourses, and we were still reviewing betting products as we continue to do to this day (albeit on a smaller scale).

The eagle-eyed amongst you will notice the third item down in the middle column, Stat of the Day. This feature was incepted in November 2011, meaning we recently passed eight years of service, every one of them profitable thanks, almost exclusively, to one man, Chris Worrall. He has been as important a member of the team as anybody during this past decade and I'm extremely grateful to him for his help and support, as well as his - generally - calm influence. Thanks Chris!

This guy turned up in 2013, and I kind of liked him. But, in the end, he became a victim of the corporate culture as he was deemed not sufficiently professional looking for a site with upwardly mobile aspirations. Sigh.

Anyway, he was cool!

In the middle of 2013, geegeez.co.uk published its first racecards. They were pretty basic and they were free. There was a problem with this: I couldn't afford the data and development costs to keep them going. So, after much soul searching, I decided they needed to be a premium product based on a monthly or annual subscription. The initial fee was set at just £12 a month, a figure that recognised both my discomfort at charging for something I'd expected to monetise in other ways and the fact that there wasn't a huge amount of depth to them at that stage.

Here's how a card looked back then:

However, what we did have - in its embryonic format - was Instant Expert. Here is a very early incarnation - at that time called Race Analysis Report, or RAR - of what has become a cornerstone of form profile punters' betting activity.

Of course, Alder Mairi won this race, and below are early images of both Full Form (Filter) and the Result. 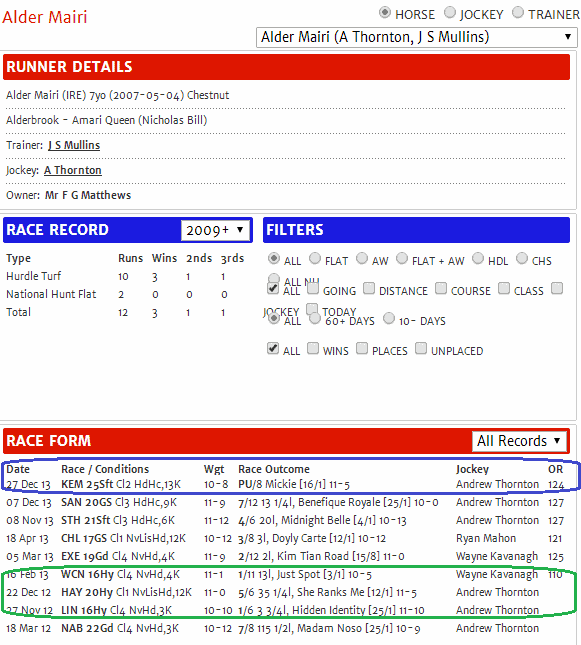 To be perfectly honest, it was successes like this one that gave me the confidence to plough on with Geegeez Gold. The end of 2013 was a pivotal time for me and the site, as the stress of making a commercial go of what had become a significant cost base was leading me to wonder if I hadn't made a massive mistake.

I'd written this post - https://www.geegeez.co.uk/a-new-beginning-for-geegeez-co-uk/ - at the end of 2013 when it had "all come on top" as Arthur Daley used to say, and I was looking for a buyer. What an error that would have been, in so many ways, for me personally; and I'm glad that people didn't see the future value in the site that I did.

By the end of 2015, the Gold service was very much the core of what we did, as it has been ever since. I tend not to blow my trumpet too much in public (though this article may contradict that!), but I had privately decided I wanted to make Geegeez Gold the best racecard and form tool service in Britain and Ireland. Five years from September 2015 - i.e. in nine months' time - I think I'll be happy we've achieved that.

Here's how the main features on Gold shaped up roughly four years ago:

The site continued to provide cutting edge data driven editorial from incisive and pithy writers such as Tony Keenan, as well as Fleet Street denizens like Tony Stafford. And Geegeez Gold continued its feature accumulation, with the following being added since autumn 2015:

Meanwhile, geegeez.co.uk had evolved visually once more, into something close to its current aesthetic:

And so to 2019. The 'look and feel' is fresher, with the red being dropped from the branding in favour of the white/blue combination. Content has been a little quieter this year, though where quantity has been limited we've deliberately focused on quality.

And so to a new decade. Where are we?

From those humble beginnings as a little blog site with, as the excellent Robin Gibson of Racing Post's Surf and Turf feature once said, "a few serviceable posts", we've created a community of racing fans, and a betting information hub with few - arguably, no - peers.

During that time, we've syndicated horses and enjoyed numerous winners; we've sponsored jockeys such as David Probert, Rex Dingle and Callum Rodriguez, and the ever-brilliant Anthony Honeyball yard; and I/we continue to re-invest pretty much everything that doesn't put bread on my family's table into this website.

Whether it's top class editorial from the Tony's, Keenan and Stafford, Jon Shenton, Dave Renham, Andy Newton, and of course Stat of the Day Chris and myself; or new features within Geegeez Gold, such as sectional timing, additional reports, and greater user configurability (all built by the peerless Nige and our new database whizz, Jean-Francois), the subscriptions you pay contribute directly to the ongoing development of the service and the site.

We've a very busy year of development planned. Here's what's on the menu for 2020 and where I hope we'll be by this time next year:

- Betfair exchange data and interface to wager directly into the exchange

- A raft of smaller upgrades including PRB (percentage of rivals beaten), a trainer 'days since last run' report, graphical race visualisations, overrounds, HC2 and TC2 (2nd start in a handicap or for a new trainer), ROI calculations in reports and draw/pace content, and plenty more besides

Finally, a very heartfelt word, directly from me to you.

For allowing me to live my dream for more than a decade now, I cannot thank you enough. Whether you've been here since the get go or have stumbled upon us more recently, THANK YOU. Thank you. Thank you. I hope that the content on these virtual pages attests to the sincerity of my gratitude.

Here's to the next decade!

Matt, and all of the team at geegeez.co.uk

Jon Shenton: Some Thoughts on Action vs Angle Bets