In my last article I examined pace in general in National Hunt racing, writes Dave Renham. I looked at some overview stats for all race types before focusing on chases, as the figures suggest these races offer the strongest front running edge. In this article I am going to focus on jockeys to see if there are any noteworthy patterns or trends from which we may be able to take advantage.

For new readers, when looking at pace I’m looking at the initial pace in a race and the position that horses take up early on. In National Hunt races I am generally focusing on the time between the start and the completion of the first obstacle, though it may be a slightly longer section than that sometimes. The pace section on geegeez.co.uk is the basis for my number crunching, and that can be found within any racecard in the PACE tab, as well as in its own tool, the Pace Analyser. The data is split into four run styles – Led (4), Prominent (3), Mid Division (2) and Held Up (1). The number in brackets is the pace score that is assigned to each run style. Hence the higher the score the nearer to the front a horse has been in the early stages of a race. I think it is important to note that these early positions tend to remain fairly similar for the first half of the race at least.

In terms of the position a horse takes up early in the race one could argue that the most influential factor is the jockey. In National Hunt races there are no starting stalls and hence it is up to the jockey how near to the front he/she is when the flag falls and the race starts. They also have a key influence in the first furlong, in terms of how quickly they want their horse to run and what position they want to be in the field. Now of course the trainer may have given the jockey instructions as to how they want the horse to be ridden so this can be a factor as well. Also, we need to appreciate that certain horses do have a preferred running style, and this will be taken into account by both trainer and jockey.

My starting point in terms of data is a look at the figures for all runners during the period of study (these are the same figures that were used at the start of the previous article). They give us base figures from which to work:

The advantage of racing up with or close to the pace is clear to see. However, I believe that this front running bias is still not fully recognised or appreciated by many trainers and jockeys.

Baseline established, I now want to look at jockey performance in more detail. As a starting point let us see which jockeys took the early lead the most (in % terms). I have included only jockeys who had at least 200 rides (all running styles) during the time frame specified. (For comparison purposes the average percentage figure for all jockeys is just under 16%.) 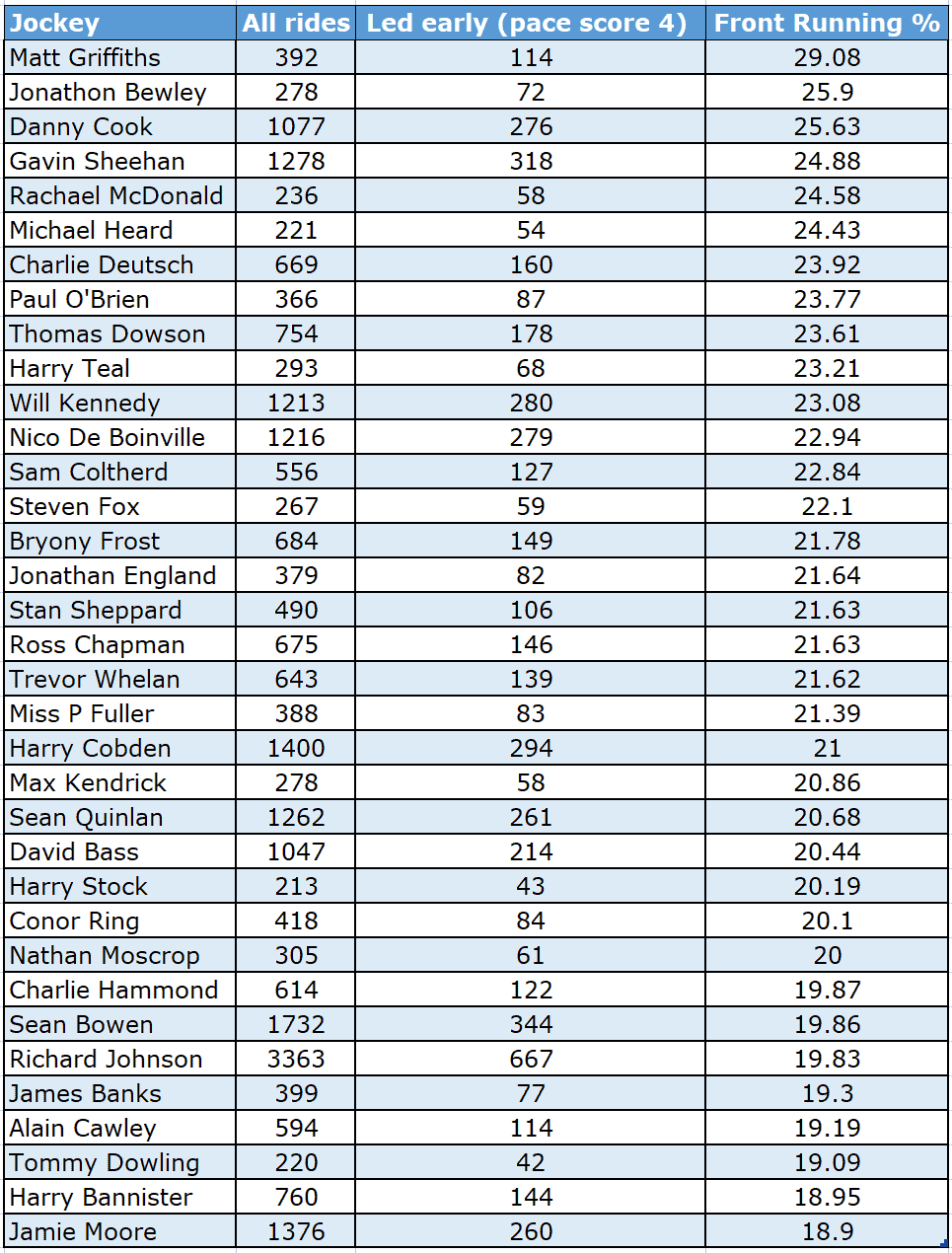 Matt Griffiths heads the list – he has ridden most for trainer Jeremy Scott and, when they team up together, he takes an early lead just over 30% of the time. Now these percentages are interesting and useful for betting / trading purposes, but it is also important to appreciate how successful a jockey is when going to the front early. It is no good taking your horse to the front a significant proportion of the time, if you rarely go on to win the race.

Going back to Griffiths riding for Scott, of these front runners, 25% have gone on to win. Compare this to a 7% success rate on horses that are held up for this jockey/trainer combination. Hence it makes sense to look at the jockeys who have secured the highest win percentages on their respective front runners: 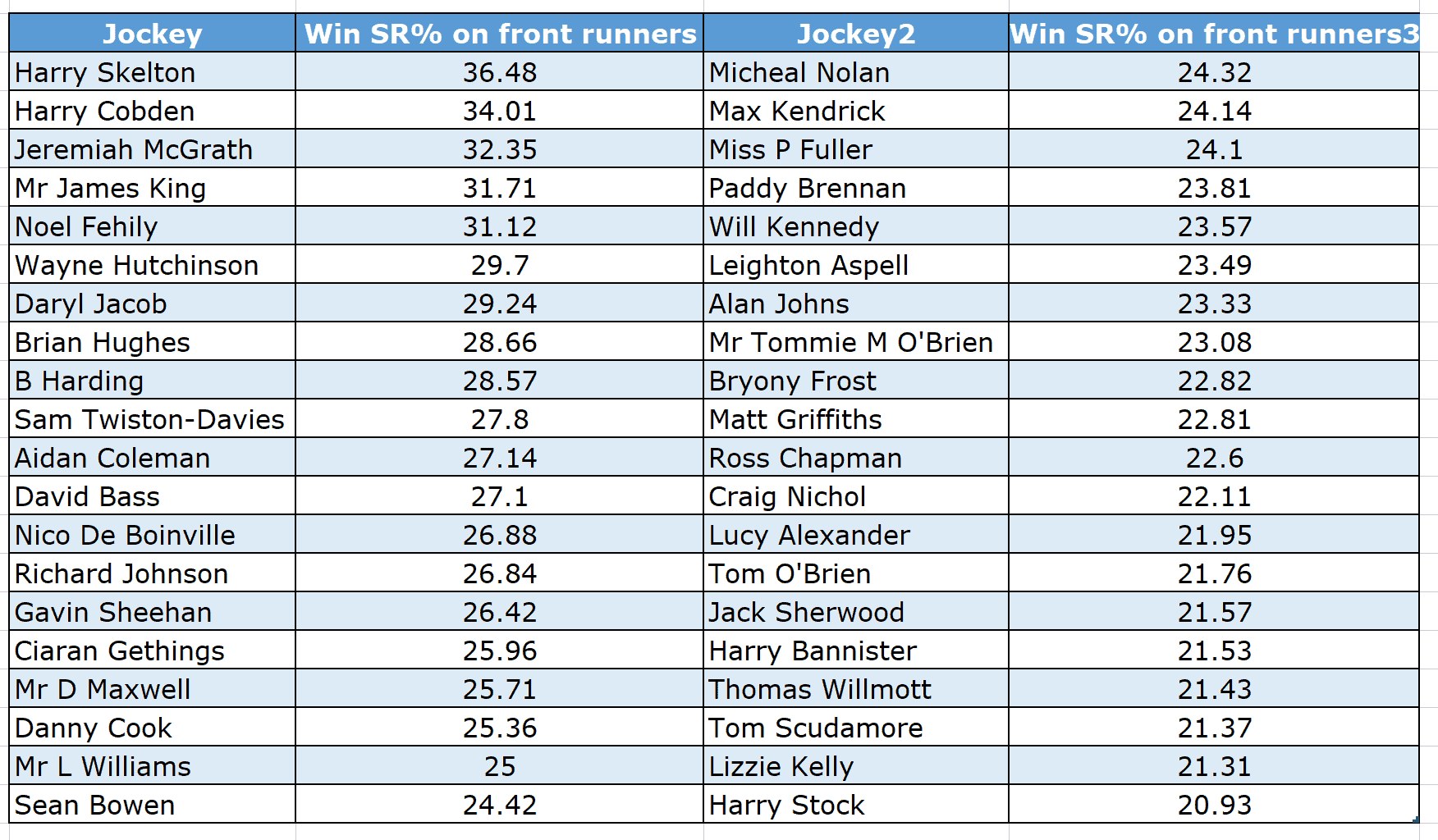 Moving back to jockeys and how often they take the early lead, let us look at the jockeys who have led early less than 10% of the time (well below the average). 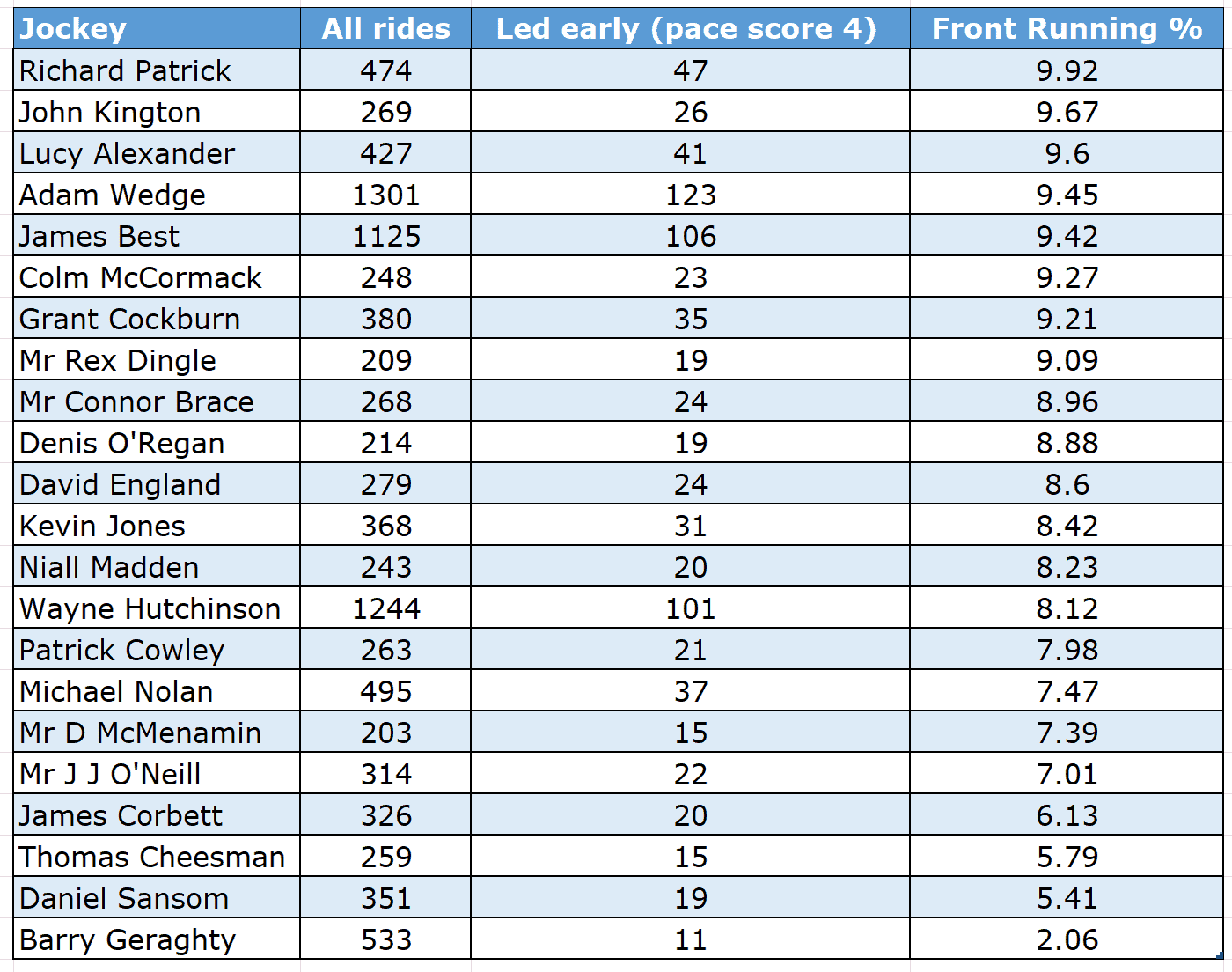 Top jockey Barry Geraghty, retained by leading owner JP McManus in Britain, has remarkably low figures – he has led early in just 11 races from a total of 533. I find that staggering. Of those 11 he won on 4 of them (36.4%). He does have an excellent strike rate on prominent runners (34.9%) and perhaps he just prefers tracking the pace rather than setting it. For the record, his win strike rate on horses that race mid pack is 14.2% and on hold up horses is 18.7%.

And finally for this article, I have created average pace figures for jockeys. Essentially, I have added up the pace scores of each jockey and then divided by the number of races they have ridden in. The higher the average score the more likely a jockey is to ride up with or close to the pace. The table below shows the top 40 jockeys in terms of average pace figure: 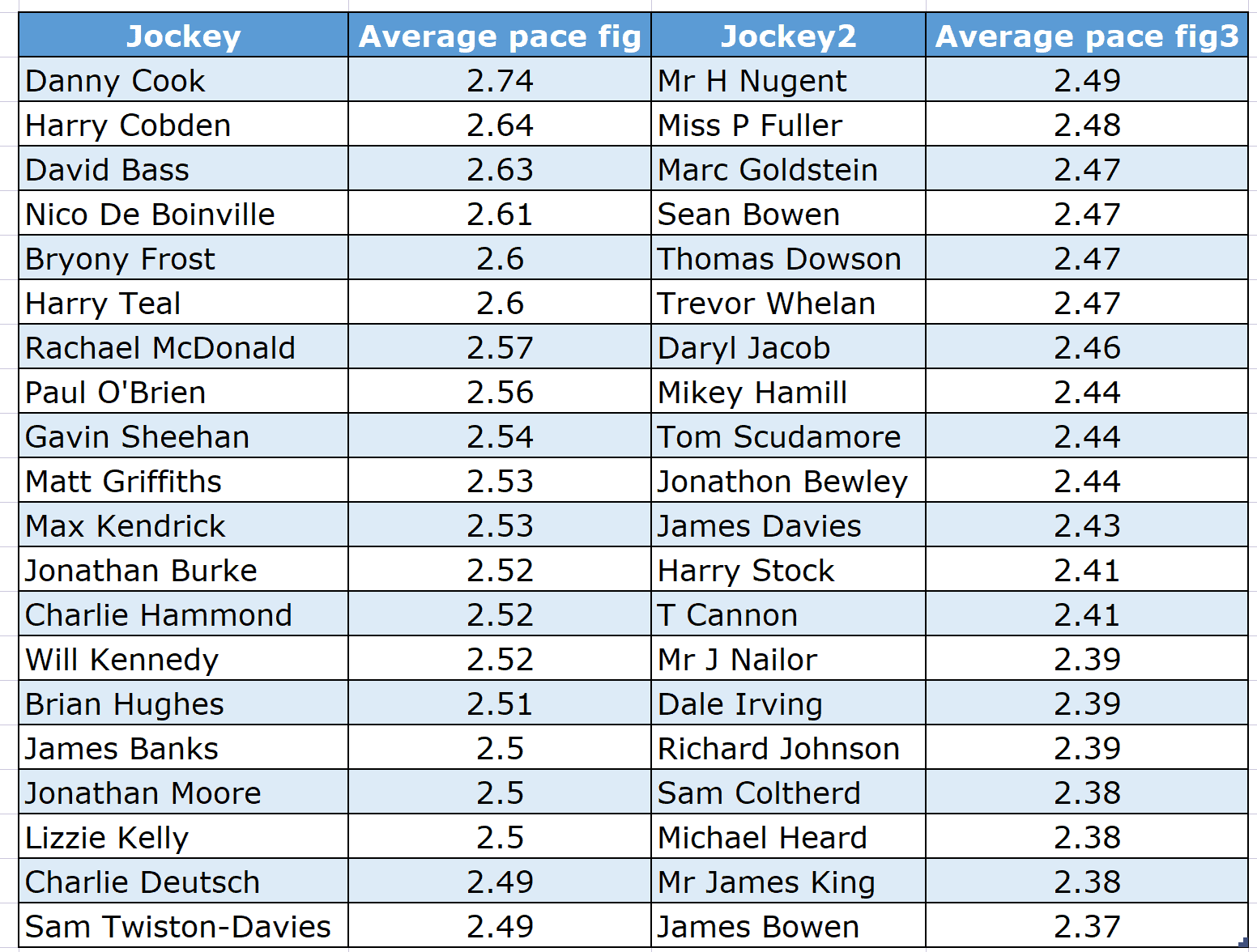 Danny Cook tops the list and is a jockey that I think is worth keeping an eye on if riding a horse that is likely to front run. He has a decent win record on front runners, and has even won from the front on 33/1 and 50/1 outsiders.

Of course, this type of article can only scratch the surface, but the Geegeez platform really allows you to go into much greater detail should you wish to. If you are keen to dig further, using Query Tool, expect it to really help your long term betting success; and it would be great if readers were happy to share their findings with other members on the forum or even in the comments below.