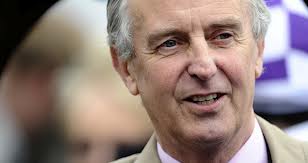 Jim Bolger doesn’t like rules, writes Tony Keenan. Some of his more liberal stable staff might disagree with the code of abstinence that prevails around Coolcullen but in terms of training rules of time, space and distance, Bolger doesn’t care. The received wisdom with Group 1 horses is clear: find their distance and stick to it, campaign them sparingly, don’t travel them too much.  Bolger ignores all of these, treating his group horses like handicappers, mixing up their trips, racing them often, travelling abroad at will. If another trainer took the same approach, the racing world would question what sort of bat-crazy methods they’re using. With Bolger, we’ve seen it all before and have come to expect the unforeseen.

This season’s experiment is Pleascach. Already she has dropped back from a strong finishing win over ten furlongs to win the Irish 1,000 Guineas in which her trainer ran two pacemakers to bring her home. Her next trick will be a relative sleight of hand in the Ribblesdale before a planned David Blaine-esque feat taking on the colts in the Irish Derby. But she’s only following on from other Bolger horses that have broken the rules and won.

Only the brave, drug-addled or a hopelessly optimistic owner could have predicted Alexander Goldrun would win five Group 1’s at the end of her juvenile season. At two, she ran eight times, including five nurseries; she started off with a rating of 88 and won just one of those juvenile handicaps. Improvement came at three, though, where she was in the frame for three Group 1’s before returning from a French-style mid-summer break to win the Prix de l’Opera on Arc day.

It was her next run that would define her, however. Bolger took her to Sha Tin in December of that year to win the Hong Kong Cup, becoming the first – and as yet only – Irish-trained winner of that race; in fact, by my reckoning there had been just four Irish-trained runners in the race before her, the race first run in 1988. She was also the first three-year-old to win the Hong Kong Cup – Snow Fairy became the second in 2010 – and joined a roll of winners that includes Fantastic Light and Falbrav. Not bad for a filly once rated 88.

An unbeaten Champion Two-Year-Old who won the Coventry, National and Dewhurst, Dawn Approach was clearly not the average thoroughbred but nor was he unique. He returned at three with a five-length win in the 2,000 Guineas which led to him being sent off at 5/4 for the Derby, the decision to run influenced by factors like Godolphin buying him and Bolger having taken the Guineas route to Derby success with the sire, New Approach.

The trainer couldn’t get away with breaking this rule, his top-class miler running like what he was, pulling viciously with Kevin Manning in the early stages, allowed to lead six furlongs out and ultimately finishing a tailed off 33 lengths last. This may have been a rare time where Bolger second-guessed himself as he could have left the winner at home; his Irish Derby winner, Trading Leather, would later beat the Epsom form at the Curragh.

Dawn Approach seemed set for some time off after the Derby, if for nothing else than to teach him to settle properly and calm his nerves. But Bolger was having none of it. Seventeen days later, Dawn Approach runs in and wins the St. James’s Palace at Royal Ascot, beating his arch-rival Toronado in a race that didn’t go to plan as he suffered a heavy bump in the straight. Many questioned whether Dawn Approach had left his season behind at Epsom, but Bolger just kept him rolling.

There were hints at two that Finsceal Beo could take racing and travelling well – she won the Boussac and the Rockfel, the second under a penalty, within a fortnight in the autumn of her juvenile season. This set up an ambitious plan at three; three Guineas, four weeks, the UK to France and back to Ireland. Taking the modern period into account, from 1979 to present, winning the first two races is doable if unusual. Miesque (1987), Ravinella (1988) and Special Duty (2010) completed the Newmarket/Longchamp double.

The English/Irish double, seemingly the more logical for horses trained in these islands, is much rarer, only Attraction in 2004 achieving that since 1979. Finsceal Beo of course did the double in 2007 and narrowly failed in winning all three, going down by a head in France, with the ground perhaps an excuse. What is most notable however is that defeat came in the middle leg, giving Bolger an obvious out not to run her at the Curragh. But he didn’t deviate from the plan and she landed her second Classic at home.

Topping out a rating of 113, Light Heavy is hardly the most memorable Bolger horse but he is an unheralded cog in the headgear revolution that has happened in Irish racing. In 2012, he landed the Ballysax/Derrinstown double at Leopardstown; nothing unusual in that but he did it in cheekpieces. The aesthetics may not have been pleasing but they were effective.

Irish racing is hidebound and things like blinkers and cheekpieces were viewed in the traditional sense; rogues’ badges that you really don’t want your horses, especially the good ones, to wear if at all possible. This is backed up by the numbers though I do allow that the Irish authorities were quite slow to include this as part of their racecard information. Between 2003 and 2011, cheek-pieced runners in Irish group races were 3/124, a strikerate of 2.4%, and two of those winners were trained in the UK; Irish trainers simply didn’t want to use them.

Since 2012, the year Light Heavy won his double, their record is 14/113, a return of 12.3%; there have been almost as many runners in cheekpieces the last three and a bit years than there were in the previous ten. We have had a Derby winner (Ruler Of The World) race in them as well as an Ascot Gold winner (Leading Light). Aidan O’Brien uses them extensively and set the tone for the rest of the training community as befits his position as Champion Trainer. It was his old mentor Bolger who was the earliest of adopters though.

It is one thing to experiment with a horse’s trip preferences early in their three-year-old season to find their optimum, quite another to continue doing it all season while bringing her back and forth from Britain and Ireland and later France and Hong Kong. Lush Lashes was the blueprint for the trip-versatile, frequent-running Bolger filly that would later be seen at a lower level with Banimpire (though there was nothing lower-level about her price tag as she sold for €2.3million in 2011 as a broodmare prospect) and hopefully Pleascach.