Welcome to week three of the Clock Watcher feature, illustrating performances of interest from a sectional timing perspective. Geegeez Gold has a range of sectional data to assist curious bettors, including sectional percentages, finishing speed percentages, and running lines: we'll discuss the last named in more detail in this article. But first, a few races and runners whose efforts can be marked up from the bare ratings.

The David Loughnane-trained Kaser is hardly a dark horse, having won five of his 15 - and three of his last five - all-weather starts, but the five-year-old still looks to be progressive based on the way he finished in his most recent victory. That one, like the other four, was achieved at Wolverhampton and, like three of the other quartet, over the extended nine furlongs. 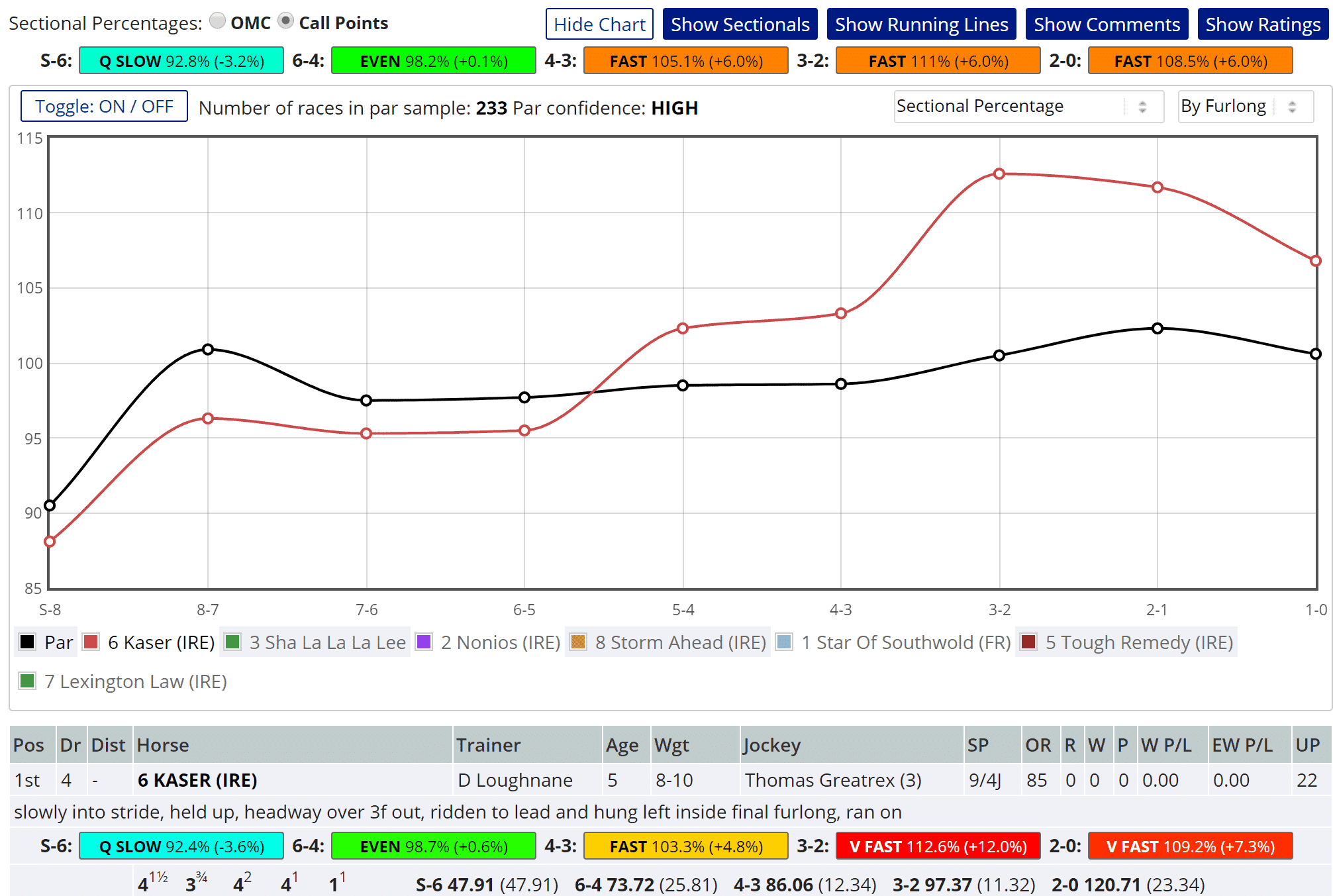 A feature of this win, in a Class 3 handicap on 13th January, was his ability to quicken off a fairly steady gallop. Indeed that is the hallmark of all five of his wins, most notably in his penultimate run where he went from last to first in the final furlong and a half (making up more than six lengths off an even gallop!), an attribute which makes it hard for the handicapper to accurately peg his ability: since August last year he's won four times, starting off 75 then 78, 83 and 85. Now on a career high mark of 88 he may not be done yet, especially over that nine-and-a-half furlong range at Wolverhampton.

It was a quieter week on the novice stakes front, with no Waldkonig's nor even a Union about which to eulogise. Nevertheless, Tommy De Vito, no relation to Danny, caught the eye when sprinting away from his rivals over six furlongs on Newcastle's straight track.

The chart shows how closely matched he and second-placed Never Dark were through the middle of the race before Tommy, red line, opens up, his final furlong almost half a second quicker than the odds-on favourite (see individual times inline below chart). 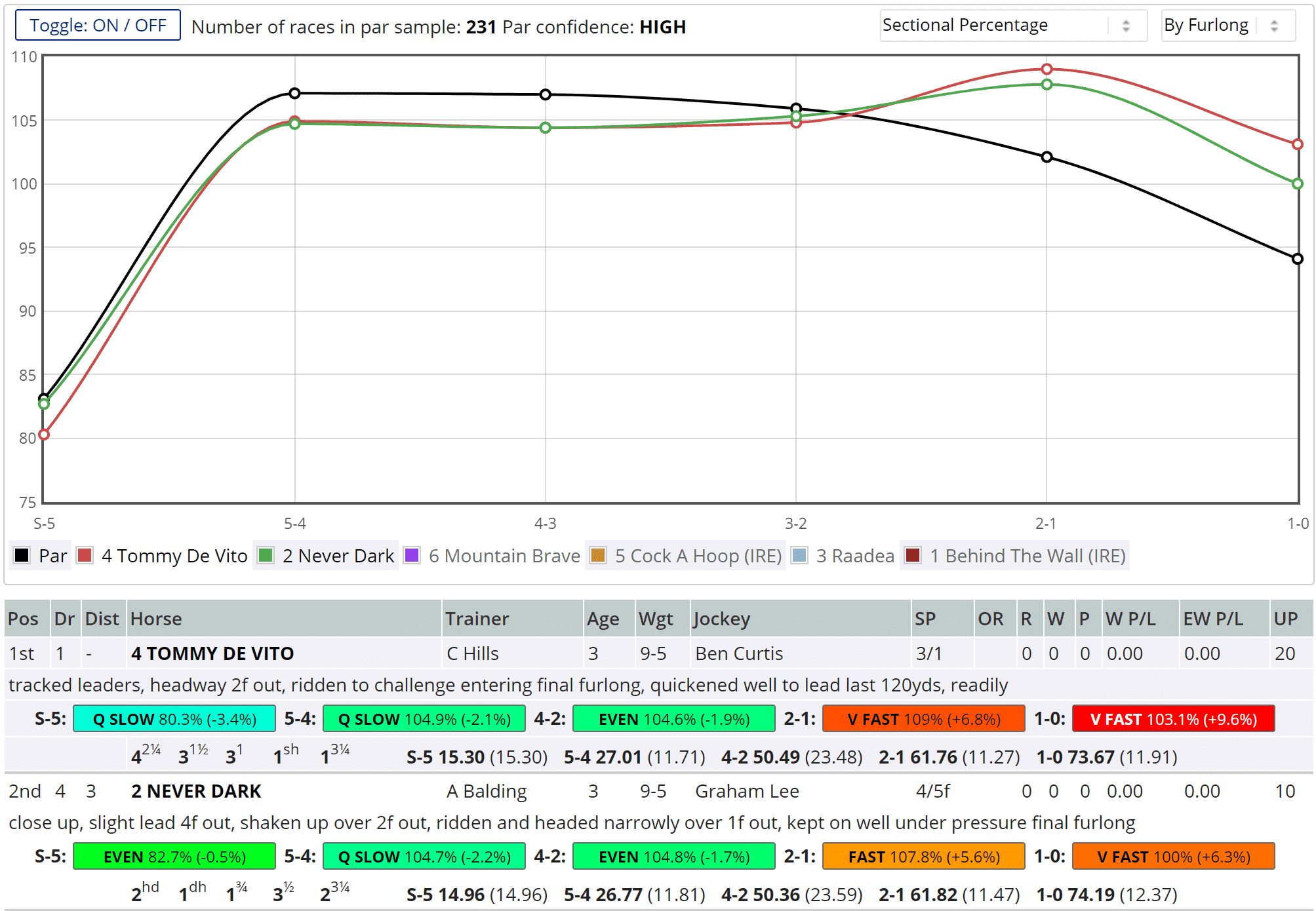 This performance represented progress from his debut second, over the same course and distance, where he again made a big move off a slow pace two from home before flattening out a little in the final furlong. He should step forward again and it will be interesting to see where he heads next.

Much was made of Wanaasah's all the way victory last Wednesday at Wolves, mainly because of the manner with which it was achieved. The running lines are unambiguous:

In this two mile race, we can see that Dylan Hogan was 16 lengths clear after half a mile (S-12 1,16). But the second horse, Fearless Warrior, was also clear of the third. Indeed, with a mile to go - 12-8 running lines - favourite Purdey's Gift was 47 lengths - FORTY-SEVEN - behind the leader.

The issue here is that, although Hogan went reasonably quick in the first quarter of the race, he then steadied things up quite a bit, leaving enough in the tank to comfortably repel his never-sighted rivals.

Georgia Dobie deserves some credit for sitting somewhat closer to the leader; but the rest of the riders got a beasting from Hogan here, the third-placed horse finishing 16.5L (officially, more like 18 lengths) behind the winner.

Amid the all-too-predictable cries of "hang 'em out to dry" from the kangaroo courts of social media, it should be borne in mind that a) this was an apprentice race where, by definition, riders are inexperienced, and b) this was a most unconventional setup over a trip which probably requires more tactical awareness than shorter races.

I'm personally of the view that the winning jockey deserves praise for his enterprise, the second should be recognised for being alive to the situation, and the rest will learn from this contest. That, after all, is the main point of apprentice races.

The 11th January, ten days ago, was a meeting for which the sectional data arrived to us a little tardily. Pity, as there were a couple of noteworthy sectional skirmishes on the Lingfield card that day, which are belatedly reviewed below.

First up, Fizzy Feet notched a good win in typical jump-and-run fashion. Representing the same Loughnane/Lowe/Hoyland connections as Kaser, Fizzy Feet dictated from the front and lasted out in this six-furlong Class 3 handicap. But the placed horses must be wondering what might have been as all of the second, fourth and fifth were given too much to do; again, in fairness, this was probably more about the Kingscote masterclass, bossing steady fractions and kicking at the right moment, than any major clangers in behind.

But each of Total Commitment, Lady Dancealot and Count Otto - perhaps even Second Collection - might have won this on another day. Third placed Typhoon Ten, under David Probert, was given what might be considered a slightly more optimal ride, the horse ultimately not good enough to either dictate the pace or quicken in the circumstances.

Count Otto has run once since, finishing runner up in a race he tried - uncharacteristically but as a result of it being paceless - to dominate from the start.

I'll be watching this cohort closely in the coming weeks.

Silent May Be Golden, So Too Goring

On the same card, a Class 2 mile handicap went the way of Silent Attack, resisting the strong challenge of Goring. Bought for just £10,000 at the Ascot August sale last year, the ex-Godolphin seven-year-old picked up very nearly twelve grand for this score alone, a fine piece of opportunism by trainer Tony Carroll.

This time I've highlighted the early pace-setter, Red Mist (light blue line), who faded to a long last, as well as the winner (red line). Ben Curtis, runaway leader of the all-weather jockeys' championship, was always in the right place here: tracking the favourite in a length or two second, he took control before the quarter mile pole and readily held off the late-charging Goring.

Both Silent Attack and Goring look highly capable at this level when the early tempo is steady, as does third-placed Ultimate Avenue, who came from further back and could never really land a blow. The trio all recorded sub-22-second final quarters. 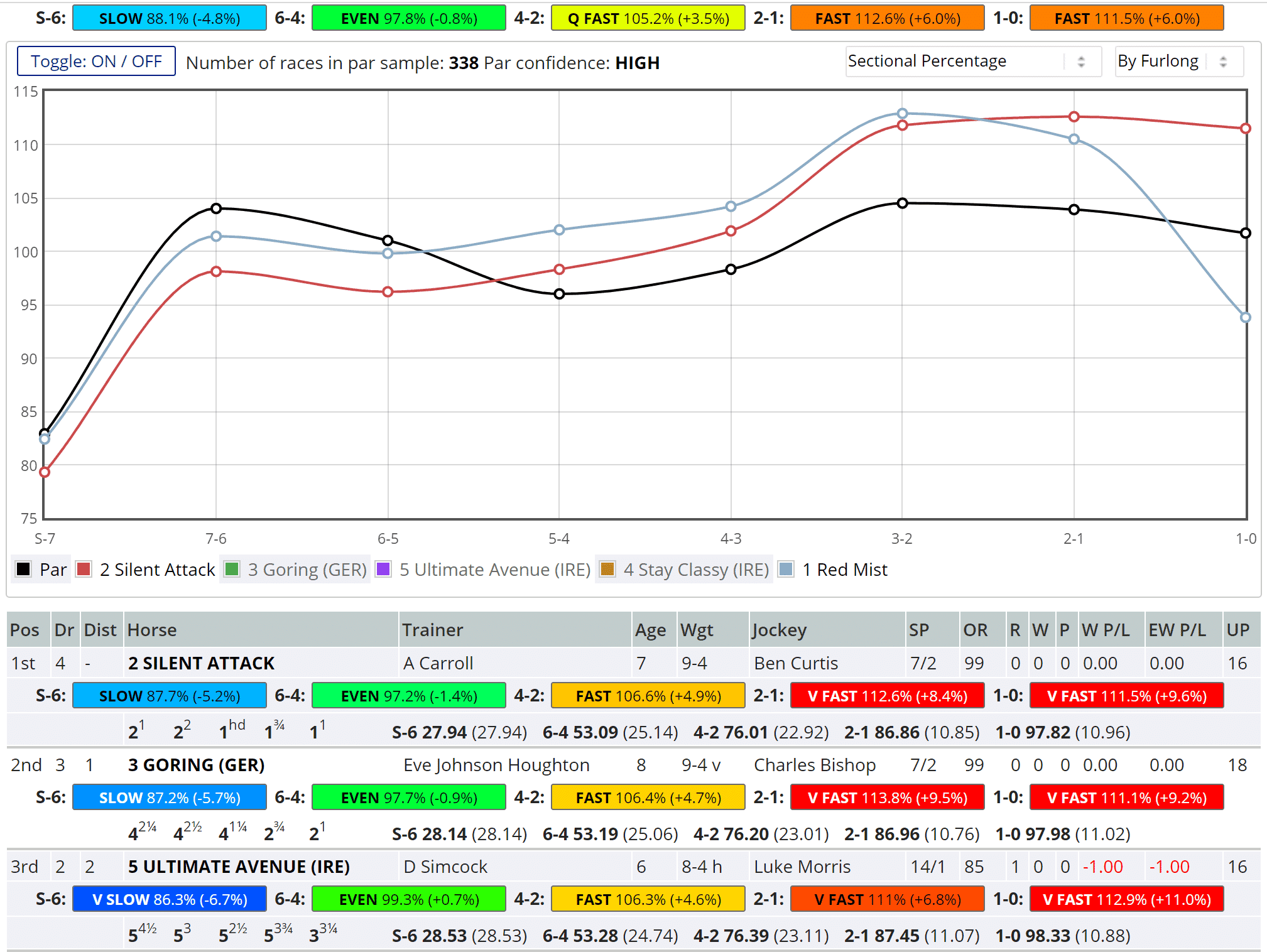 What Does It Mean: Running Lines

A feature of every American formbook, as well as many others around the world, running lines in the UK have hitherto been confined to greyhound racing only. Historically, the main reason for that was the lack of availability of data. But Total Performance Data's accurate tracking of all horses' positions throughout a race has enabled us to display both the horse's race position and its distance behind the leader (or in front in the case of the race leader).

We could provide this information on a 'by furlong' basis, but have instead adopted an American style 'points of call' (or POC) approach. This breaks races into five sections, the first of which always begins at the start of the race and the last of which always ends at the finish line. Unlike American POC, where there is more focus on the home straight - something which largely relates to the concentration of race distances of around a mile and shorter - we have elected to divide the sections somewhat more evenly, as can be seen from the table below. 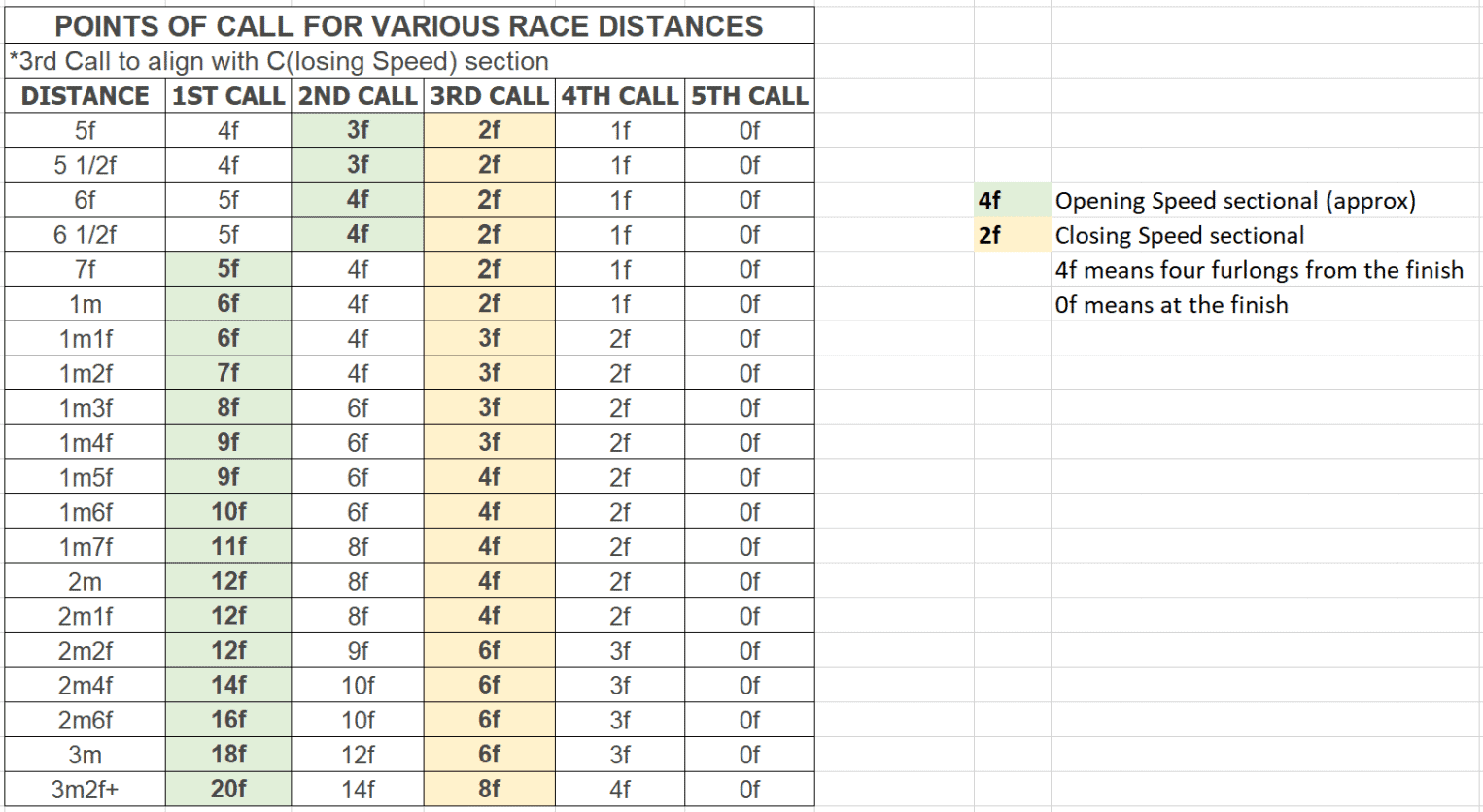 What do running lines tell us? They can tell us things like run style preferences, or how much ground a horse made up and, approximately, when. They can help us piece together a pace map. They can help us better understand, largely at a glance, what happened to a horse in a race. Of course, they lack nuance with regards to things like trouble in running or wide trips, but so too does any data-driven snapshot approach. If you want the real fine detail, watch the replays! [But even then, don't trust your eyes exclusively; rather, corroborate/refute the visuals with the data]

Here's an example of a horse running today with a pronounced run style: Warrior's Valley is a one-dimensional speedball. He wants to get out first and try to stay in front. On days when the race lacks pace contention he has his best chance, all other things being equal. He has stall one this afternoon, and only one other likely pace horse; as he slowly drops down the weights his day ought to be close when he gets the run of things.Perhaps it might be today. 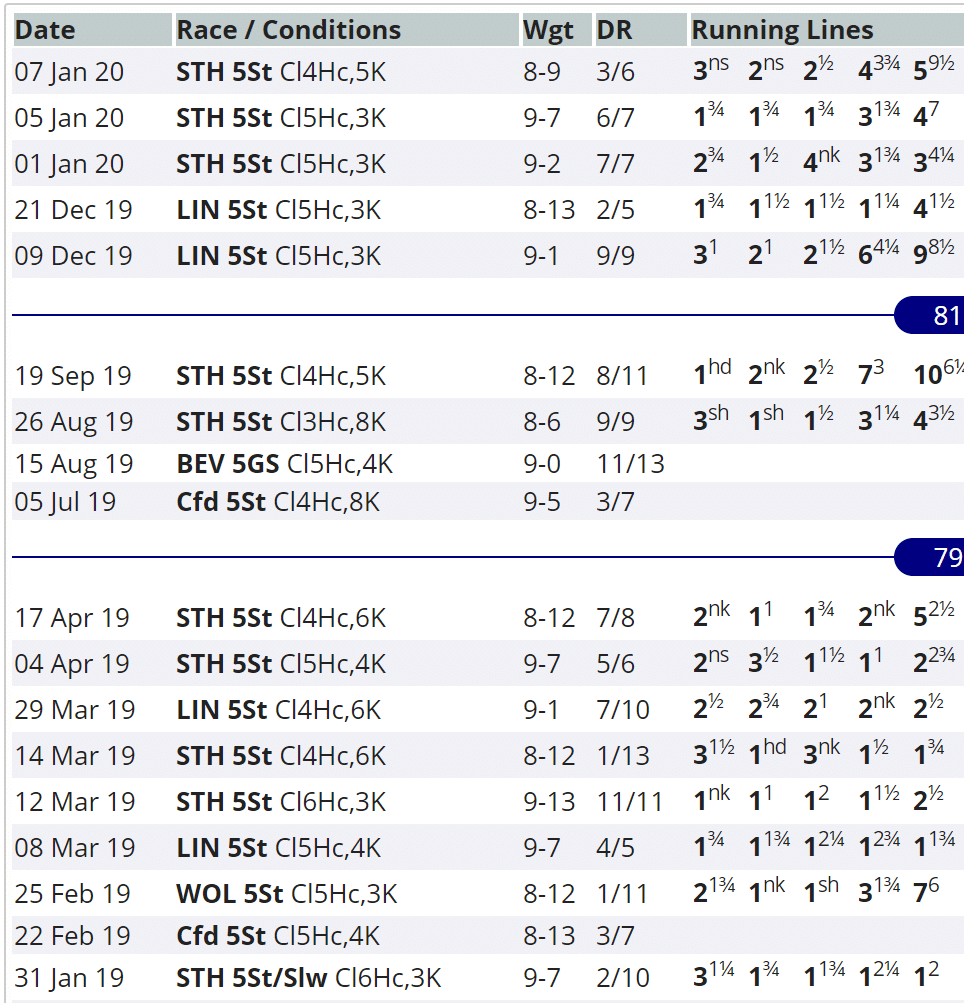 As a completely new convention to most, it may take some getting used to, but running lines offer far more granularity on a horse's race position than the in-running comments generally do. The optimum, of course, is to use them in tandem such that any 'bad trip' incidents noted in the comment can be factored in.

That's all for this week's Clock Watcher. I hope there was something of interest in the above and, if you've any questions, do leave a comment below. I'll be happy to answer them.

p.s. a gentle reminder that there is much more intel on sectionals - and how they're laid out on geegeez.co.uk - in the User Guide. Click here to download the latest version.