The intent of this Clock Watcher series is primarily educational, though obviously with some entertainment value lobbed in as well. It is not really meant to be a tipping piece for all that example horses are generally presumed to have potentially more ability than immediately meets the eye. That said, when trying to extol the virtues of sectional data it certainly helps, from a credibility perspective as much as anything, if some of the mentioned animals win in their near futures.

It was heartening then to see National Anthem, flagged in the inaugural episode of Clock Watcher, win yesterday - and do so in similar vein to his bullet-from-a-gun effort ten days previously. To have doubled up after overcoming trouble at the start was more meritorious than a winning margin of three-quarters of a length implies. With a further four lengths back to the third and three more to the fourth it will be interesting to see how the handicapper reacts.

National Anthem was available at 5/2 overnight before returning a heavily-supported 11/8 favourite and, after two taxing runs in ten days following an absence of 471 days, he may need a little time before his next assignment.

Onwards, and a horse who caught the eye last week, sectionally speaking, was Union, a three-year-old New Approach colt. Sent off at 6/5, it seemed that very few people had missed the finishing-strongly nature of his Kempton debut: that day he was held up before making up ground late. Sadly we don't yet have sectional data for Kempton but happily we do have them for Newcastle; and this is what they tell us about Union. 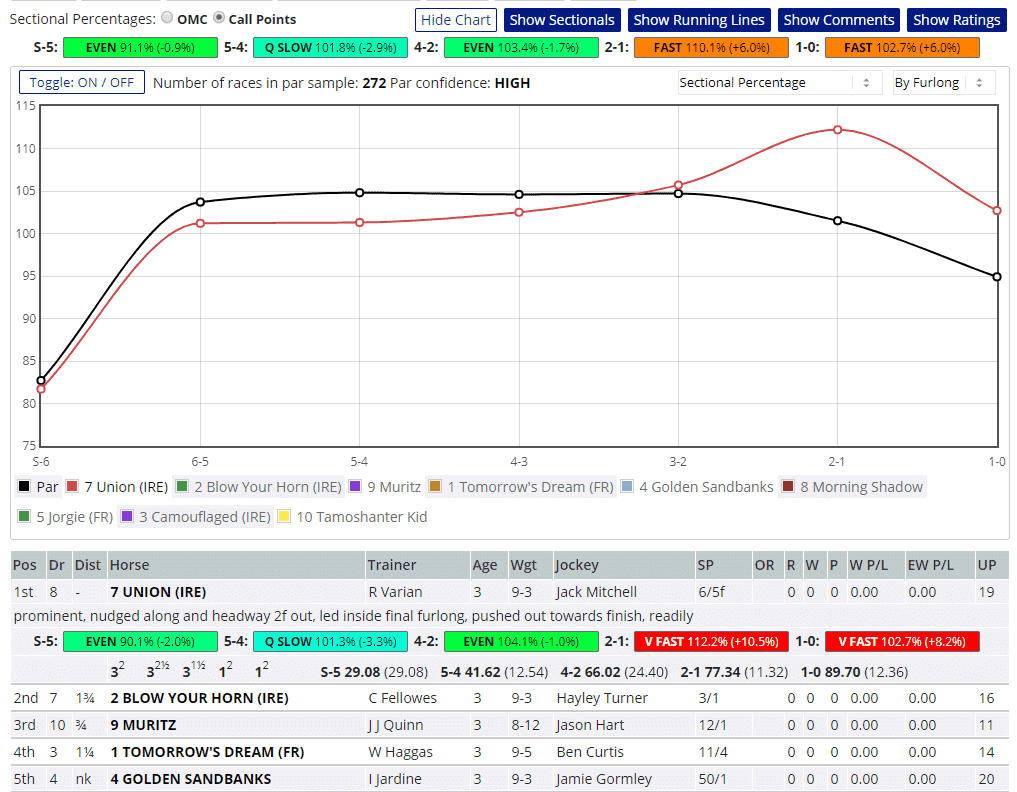 Let's start with the chart. The black line is par, an expression of what an efficient expenditure of energy looks like, furlong by furlong. Note that the opening section is always relatively slow because the field begins from a standing start. (This is different from, for example, America where there is a distance of 'run up' before the clock starts).

The red line is Union's sectional percentage by furlong, We can see from the comparison of the lines that the early part of Union's race was run on the slow side of even before he began to quicken from the half mile (actually from between the five and four furlong markers, as can be seen by the upward curve).

There was a notable injection of pace from the two to the one after which the race was in the bag, Union eventually coming away by a couple of lengths from two or three other promising types.

As can be seen from his sectional blocks below the chart, his final quarter mile was very fast against par. That, of course, is largely as a result of having gone steadily early; and he still recorded a Topspeed figure of 70 in spite of that inefficiency. Adding his upgrade of 19 gives a composite figure of 89, the largest such rating in the review period.

The second, Blow Your Horn, lays claim to an 81 for what was his debut. Given some greenness and keenness early on, he should at least nearly win a similar race next time.

Another name to note is one of John Gosden's high class winter team, this time a rare trainer switch into the yard. Global Giant won a small field conditions race at Wolverhampton over most of a mile and a quarter: in what was quite a slowly run affair, the son of Shamardal passed his three rivals in short time and accelerated right away in the final furlong.

Below are the OMC (Opening, Midrace and Closing) sectionals for the race (at the top) and the individual runners (within the result table). They tell us that three of the quartet finished 'very fast', with Global Giant's final three furlongs almost 10% above par.

The '44441' running line (which, confusingly - sorry, is based on the five Call Points) tells us that Gosden's new recruit went from near two lengths last to nearly four lengths first in the final quarter mile. His Topspeed of 61 is unremarkable - a function of the tactical nature of this race - but an uplift of 27 is chunky and aggregates to 88. He might be one for the Easter Classic on All Weather Finals Day, though he'll need to find more to be competitive in that winter season centrepiece. 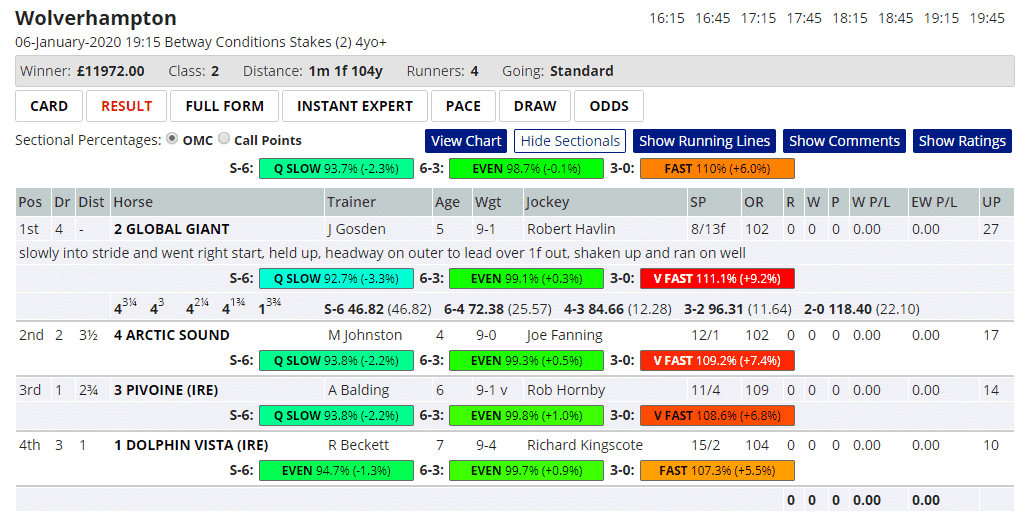 What does it mean: Sectional Percentage

Sectional percentage is the time taken within a part of the race, in percentage terms relative to the total race time. It tells us how a horse was ridden: did it do too much too soon, did it finish with more to give, or was it ridden optimally throughout? The answer is normally one of the first two, though to wildly varying degrees.

To calculate sectional percentage, you need to know the following:

The formula is as follows:

Here is the Call Points view of the result, with that 2-0 sectional percentage displayed.

This is a simple sum which can easily be configured in a spreadsheet program like Excel:

In the image above I've highlighted the calculation cell so that you can see the Excel notation for the formula. [The 'overall distance' field is a calculation of Yards/220 to get furlongs]

Things to note about sectional percentage

When looking at the coloured rectangles, deviation from green means inefficiency with stronger blues and reds implying a highly inefficient effort and, therefore, an upgrade figure indicating a horse is capable of significantly better. In the example above, Global Giant gets an upgrade of 27; but in the example below, Will To Win's rider, Jack Mitchell, has produced an almost perfect effort from the front.

One important footnote: whilst sectional percentages - and their ratings expression, upgrades - can point towards good or bad rides, such consideration should always be undertaken in the context of any known run style preference the horse has, and/or the way the race panned out.

For example, Rab Havlin could not be said to have ridden a poor race on Global Giant for all that the horse is presumed by its upgrade figure to have much more to give. It must always be remembered that the objective for a jockey is not to get a '0' upgrade but rather to win the bloody race!

p.s. I encourage you to interact with the data yourself. Check out last week's post for more on how to get started.