I'm not really sure why I started trying to assign a score to jockeyship. The notion hatched on the rattler to Salisbury last week, where I was going to meet David Probert, geegeez.co.uk's sponsored jockey. I guess, then, that is why...

My apprehension was - and remains - that jockey performance is so dependent on two other major actors, the horse and the trainer, that it is very difficult trying to pare the incidental from the coincidental.

The first question to answer then is 'what to measure?'

Number of wins or places is too simplistic. So is percentage of wins or places. Profit and loss is no more than a basic indicator, which can be heavily skewed by a single big-priced winner.

No, none of these will add much value, if indeed any value can be added from such figures.

Better barometers are percentage of horses beaten and / or performance against market rank.

But perhaps better than all of those is performance against market expectation. For example, even money shots win roughly 45% of the time. Thus any jockey winning on more than 45% of even money shots can be said to be performing above expectation (assuming the sample is of a reasonable size).

Instead, it makes sense to bracket odds together into groups. This will necessarily be arbitrary, but hopefully you'll see the general logic of the groupings.

I focused on UK flat racing during the 2014 and 2015 seasons, breaking the runners up into the above odds bands. For a jockey to appear in an odds group, he/she had to have ridden at least ten horses with odds in that bracket.

For each odds bracket, we can see the runs, wins, win percent, level stakes loss, places, place percent, number of races, and ROI

I've highlighted three columns - win %, place % and ROI - which will act as baselines.

We can now compare the performance of jockeys to these baseline data, with only those whose record betters at least one of the trio of baselines appearing in the tables.

Let's first look at the shortest odds groups, comprised of odds on and even money chances. In each grouping, I've highlighted in green the columns where the jockey's performance is better than the odds bracket benchmark. For the shorties, though, there is not a great deal of data to go on... 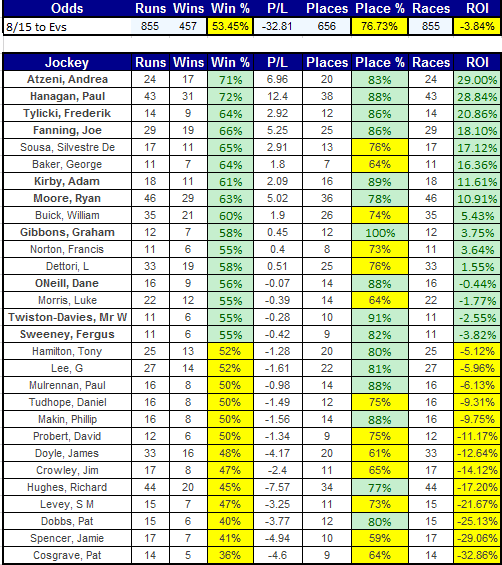 These are generally small samples, and there is little to note with the possible exception of Paul Hanagan's excellent showing across 40+ rides.

Slightly more data now, so a touch more optimism about the meaningfulness of the results. 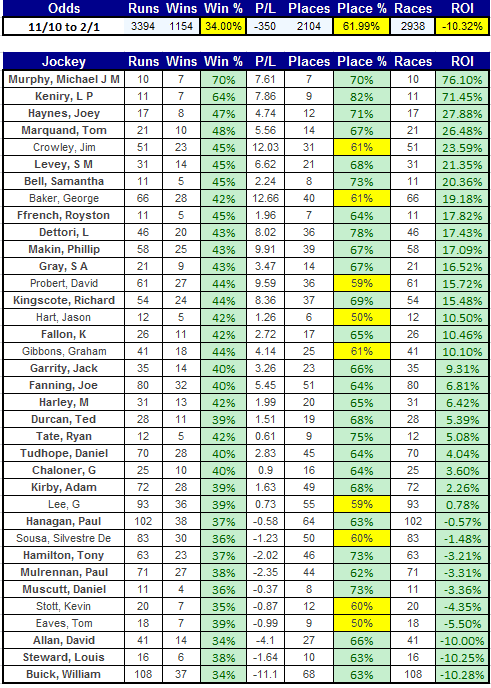 Into the bigger datasets now, and this is a group where some riders will reveal themselves as potential punters' allies.

Now, just for fun, let's take a look at the bigger priced horses, from 15/1 (or more traditionally 16/1) to 25/1. This table is susceptible to fluke results - one big winner can skew a rider's performance - and should not be taken at face value. Still, it might throw up one or two interesting niblets.

In the context of what's gone before,  it is interesting to note the presence as 'triple green' entries of Paddy Mathers, David Allan and James Doyle (all again, having featured at least in the previous section).

All good fun, but so what?

At the end of the day, the above reveals something and nothing. It is a circuitous route to demonstrate the lies and damned lies of jockey statistics, with various riders appearing at once brilliant and moderate, depending on which table one focuses.

However, some names do crop up repeatedly. Paul Hanagan and James Doyle could lay claim to being close to the pick of their peer group, based on this means of scoring at any rate; while Frankie Dettori also comes out well. Likewise Joe Fanning and Adam Kirby are seemingly more reliable than many.

Meanwhile, if looking for jockeys on the up - or currently under-rated - these data suggest the likes of Charles Bishop, Paddy Mathers and David Allan all deserve at least a second glance when jocked up.

They are, like the vast majority of jockeys, dependent on the form of their retained stables - in these cases, those of Mick Channon, Richard Fahey and Tim Easterby respectively.

At the end of the day, the difference between a horse winning and losing is probably not very often down to the rider, in my opinion. It should certainly be a given that the ability of the horse (duh!) and the trainer - both in conditioning and placing the horse - are of more importance.

Nevertheless, some jocks are better than others, and actual versus expected is a very good way of gauging jockey ability in the market context. In other words, whether jockeys might be profitable to keep onside (regardless of whether their performance is a function of horse and/or trainer form).

For each, users can view both the Actual vs Expected (a figure greater than 1.0 implies a rider's runners are sent off at bigger odds than they should be) and Impact Value.

Impact Value attempts to state the likelihood, compared to the average, of a jockey winning. This is market agnostic (i.e. it doesn't consider the odds in its judgment).

A rider with scores greater then 1.1 for both A/E and IV on a meaningful number of rides is one to keep onside. Here's an example from the racecard, for Paul Mulrennan:

This view is available to all users of geegeez.co.uk racecards, even those not registered on the website.

For Gold users, our jockey report is a single view digest of all riders competing on a given day, and can be viewed by any of the four periodicities mentioned above. 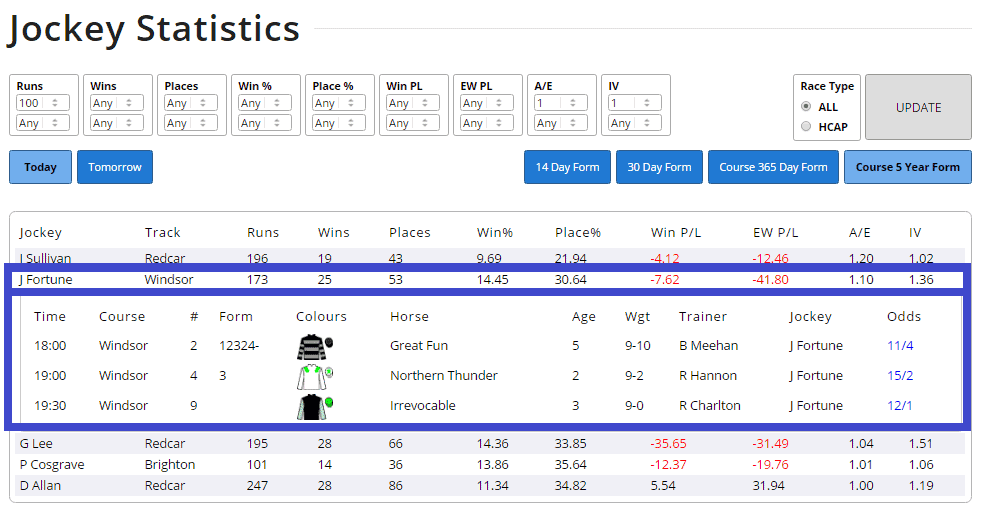 I clicked on J(immy) Fortune's entry to reveal, inline, his rides today. Clicking on any of those line items will take you directly to the race in question. Of the trio, Northern Thunder was a non-runner, Great Fun was second and Irrevocable was a 10/1 third. So, no dice for Jimmy today, but he competed well, as his numbers suggested he would.

Note at the bottom of that quintet of pilots the name of David Allan, the only one with positive figures for both win and each way profit/loss. He's a name I'll be paying closer attention to, albeit towards the end of my form deliberations rather than as a starting point.

From the tables above or, better yet, from the daily jockey statistics report, you can start forming your own educated opinions on the riders worth a few extra pounds, both in terms of weight carried and stakes wagered!