In my last article I examined some data pertaining to sires in 2yo races, writes Dave Renham. In this article I'd like to share more sire stats with you with a view to identifying both positive and negative angles from which we can potentially take advantage. The data once again cover the last six seasons including the first few weeks of the current flat season.

As with the first article in this series, I am comparing sire strike rates under different circumstances; in the first article I compared turf SR% with all weather SR%; debut run SR% with 2nd start SR% and I also compared colts with fillies. I called this the Comparison Strike Rate (CSR), the idea being that the CSR would help to show any significant differences in performance (according to the relative strike rates). Once again I will be using the CSR concept at points during this article.

Before I start in earnest, I stated in my first article that when ’drilling down’ in an attempt to pinpoint positive (or negative) angles it can sometimes feel a bit 'convenience fitted'. This needs to be flagged again as there are some stats below that one could argue fit into that category. It is for the reader to decide which, if any, of the information presented is of utility.

2yo Sire Performance by Race Distance

To begin with let us compare sire performance in terms of race distance. I am going compare performance in juvenile sprint races (5-6f) with longer distance contests (7f+). I have looked at sires that have had at least 70 runs in each category and the first table, below, highlights sires who have better records over sprint distances:

It is perhaps no surprise to see considerably more runs in the 5-6f range as compared to 7f+ for most of those in the list. Trainers do know a little bit about breeding (!) and hence they are more likely to enter runners by ‘speedier’ sires over shorter distances.

Showcasing is a sire that I would like to expand on a little. Backing ‘blind’ all of his 2yo runners over 5 & 6f (637 in total) would have yielded a small profit at SP and a 30%+ profit at Betfair SP. I would not advocate backing future runners ‘blind’ but it was something worth pointing out considering the decent sample size. Showcasing’s A/E index stands at 1.00 and over 5f it is slightly higher at 1.06; over 6f the A/E index is 0.96. Showcasing's 5f SR is 18.1% compared to 12.5% over 6f.

Now a look in reverse at the sires of 2yos that perform significantly better over 7f+ as compared to 5-6f:

The data is quite limited for some of these sires and that is important to appreciate. There is no ‘ideal’ sample size but clearly the more runs to compare the better. Unfortunately when dealing with sire stats, sample sizes are sometimes less than ideal. For the record, Sir Prancealot has an A/E index over 7f+ of 1.29 which I believe is also worth noting.

2yo Sire Performance by Going

Let us move on to look at how the turf going affects the SR%'s of sires. The following table is in a slightly different format to the others – it looks at the relative strike rates across four types of turf going: Good to firm or firmer; Good; Good to soft; Soft or heavy. For the record, if the sample run size is less than 50 runs on the particular type of going I have highlighted the SR% in red (I will continue to highlight smaller samples in red for the rest of the article). These figures additional caution due to the small sample size.

From this initial table I will delve deeper into the more interesting findings: 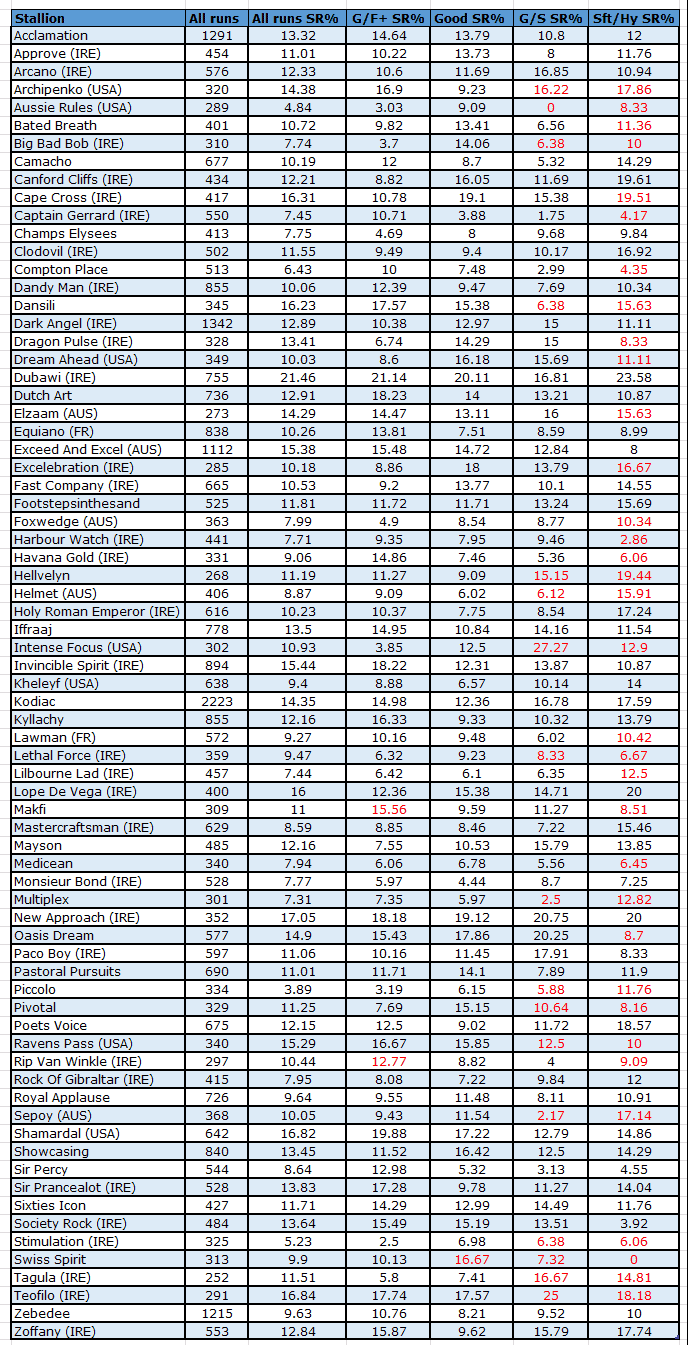 Horses with similar strike rates across the board are clearly versatile in terms of ground conditions, and hence when the progeny of these sires run you can be fairly optimistic that the going will not be a hindering factor in their performance. There are others, however, who do seem to display a going preference.

Let us first consider sires who seem to prefer firmer conditions, at least according to their win SR%s. There are seven that catch my eye – Captain Gerrard, Compton Place, Dutch Art, Equiano, Havana Gold, Makfi and Sir Percy. I have pulled up the relevant stats from the original table. It should be noted that I have added a column using a Comparison Strike Rate (CSR) in relation to good to firm or firmer going SR% versus all runs SR%:

Let us now look at the A/E indices of these sires in terms of good to firm or firmer going:

Soft/heavy data are limited for some sires so this needs to be taken into account. The following table looks at the sires whose softer ground stats look positive even if some of the sample sizes are relatively small. Again I have pulled these stats from the original table and added the CSR figure for soft/heavy SR% versus all runs SR%:

Let us now look at the A/E indices of these sires in terms of soft/heavy going in 2yo races. The figures in red again are from samples of less than 50 runs: 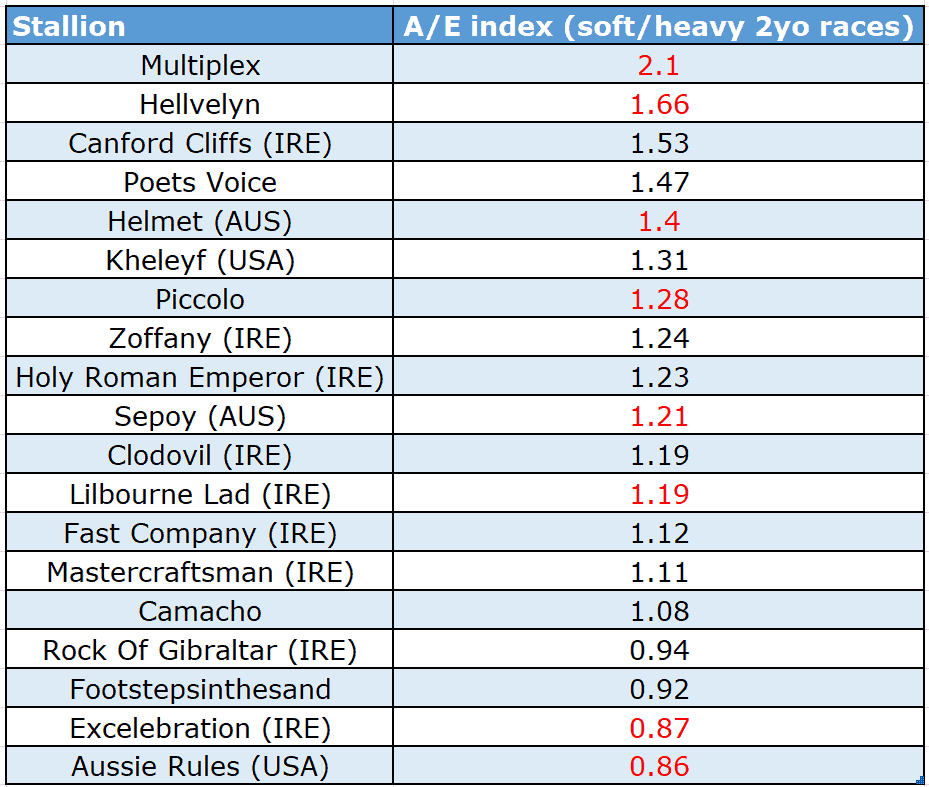 The majority of A/E indices are above 1.00 which can be taken again as a positive, but it is important to dig a bit deeper especially if the sire one is interested has limited data with which to work. Looking at the soft/heavy ground performances with 3yo runners and above may be a sensible starting point.

2yo Sire Performance by Race Class

For the final part of this article I am going to share some sire SR%s and A/E indices connected with race class. I have ignored the lowest class of race (6) and elected to focus on class 1 to 5 contests. The first table examines class 1 to 3 races; the second table classes 4 and 5. The sires in the following tables are all sires that have had over 600 runners in total in all 2yo races during the period of study. I have highlighted potentially positive A/E indices in green and as earlier, those smaller samples of less than 50 qualifying runs are coloured in red (highlighted in relevant SR% column):

The progeny of Dutch Art have struggled in class 1 events with just 1 win in 42 starts. Only 4 others placed and with exactly half of the runners starting 12/1 or shorter I would be wary of backing Dutch Art runners at this level, despite it clearly being a small sample. The progeny of Kodiac on the other hand are worth a second glance. They have provided 27 winners in total from 240 runners and the A/E index of 0.98 is decent enough. What is interesting is Kodiac’s performance improves as the distances increases. At 5f his SR% in class 1 races stands at 6.6% (6 wins from 91 starts); when we combine his 7-8f figures we get 8 wins from 35 (SR 22.9%). Small sample? Yes. Worth being wary? Yes. But it should also be noted that a further ten runners were placed meaning over 50% of his runners won or placed.

Onto class 4 and 5 races now. The data set is very decent for these runners – all sires have had at least 185 runners in class 4 races, in class 5 races this increases to 250+ for all. 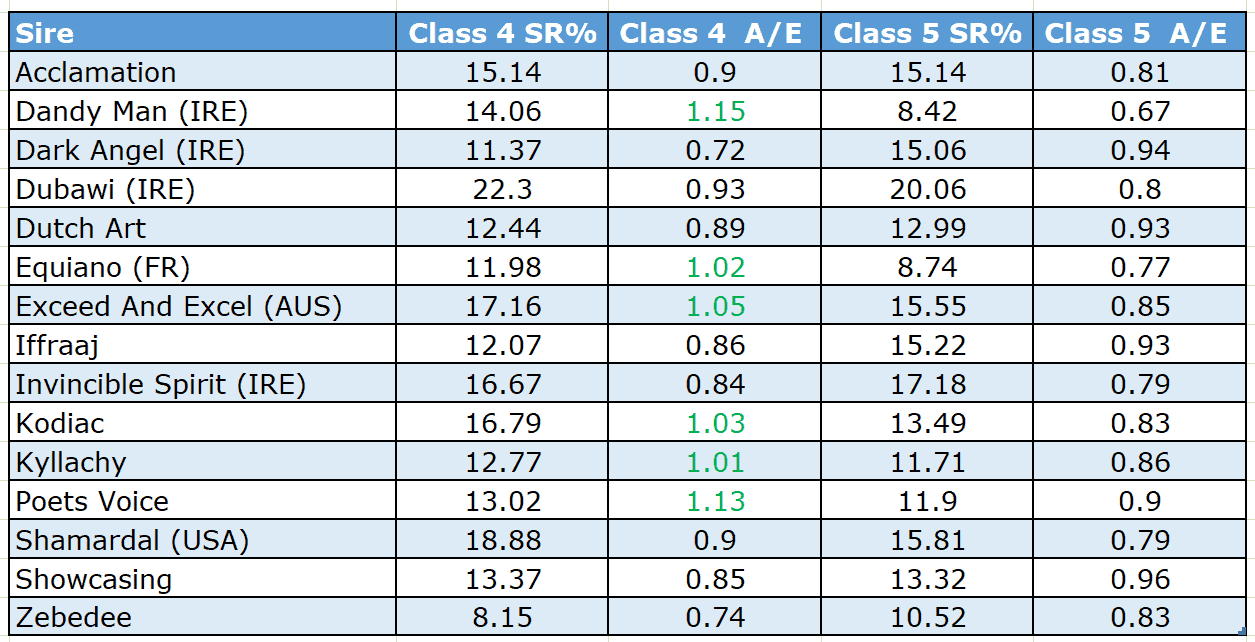 Dandy Man, Equiano, Exceed And Excel, Kodiac, Kyllachy and Poets Voice have positive A/E indices in class 4 events and all are worth closer scrutiny. Dandy Man’s progeny should be noted over the minimum trip of 5f in Class 4 events – SR% is just under 20% with an A/E index of 1.33. Likewise, Exceed And Excel has an excellent record in 5f Class 4 events – an even more impressive SR% of 25.8%; A/E 1.20. Kodiac has notable figures on easy ground: in Class 4 races on good to soft or softer his progeny have won 28 races from 134 (SR 20.9%); A/E 1.29.

I hope you have found both articles interesting and potentially useful. Sire stats are undervalued still and although the data is by no means ‘perfect’, it does offer punters some extra stats to potentially use to their advantage.