In this article I have moved away from pace research and will instead be focusing, for the first time on the virtual pages of geegeez.co.uk, on 2yo races, writes Dave Renham.

2yo races are contests where horse form is extremely limited and many punters shy away from them for that reason. Indeed, 50% of all 2yo runners are either making their debut or just having their second career run (see prior runs table below). Thus, we need to look at additional information if we are going to bet on such contests. One avenue is to look at sire data. 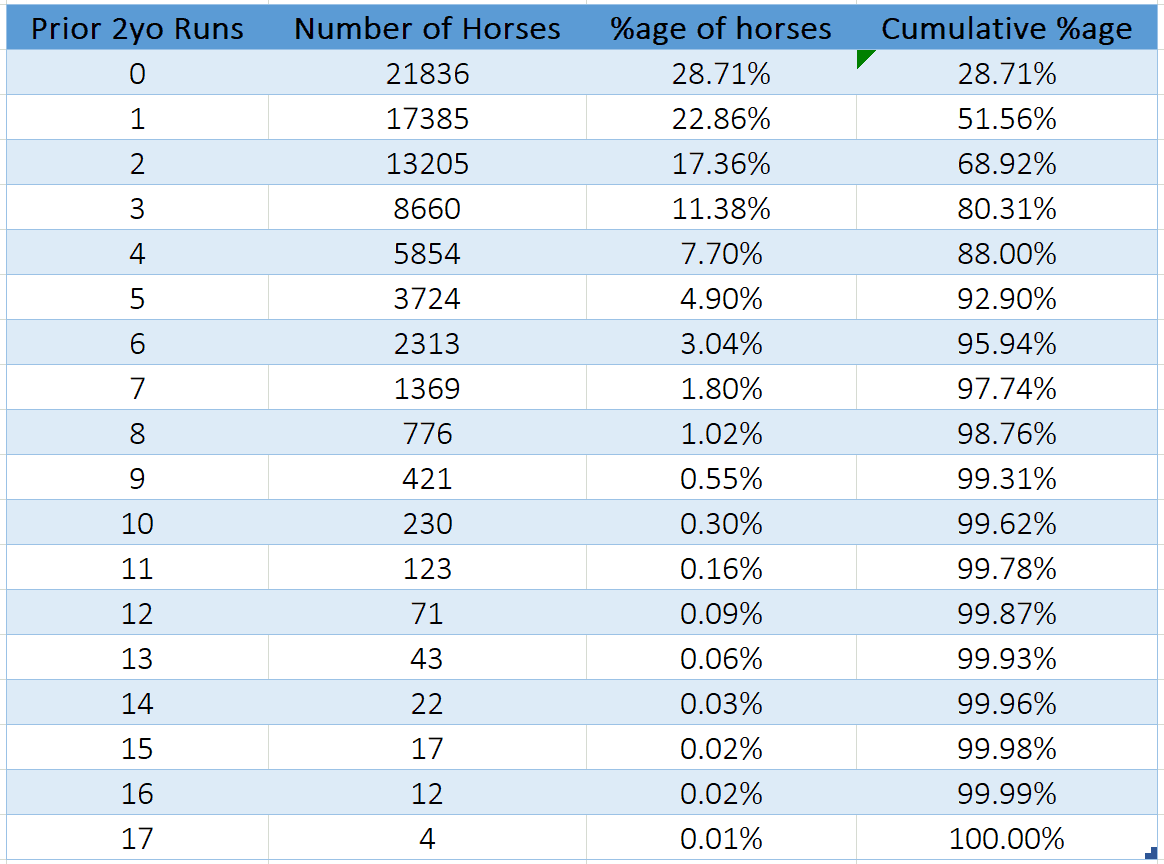 Sires are the fathers of the respective horses and many sires have a strong influence on their offspring. Why certain racehorses cost more money than others before they have even raced is almost exclusively down to their breeding and the sire is the strongest influence in that genetic makeup.

Taking a human example may help explain why some punters feel sire stats are important. Picture a mythical 100m sprint race between the offspring of Usain Bolt and the offspring of someone else of the same age living in the same town as Usain. Without having seen either child run before, where would you put your pound at even money? Most likely you would asses that Usain Bolt’s son had the stronger sire stat, and that is where your money would be likely to go. That would be especially the case if the two fathers had had children a year earlier, and the son of Bolt had won against the son of A N Other.

This article will look for positive and negative angles using sire stats from UK 2yo races. The data have been taken from 1st January 2013 to 14th April 2019 and all profits/losses have been calculated to Industry Starting Price.

2yo sires by strike rate

Firstly let us look at the sires with the highest strike rates in all 2yo races during the period of study (minimum 100 runs): 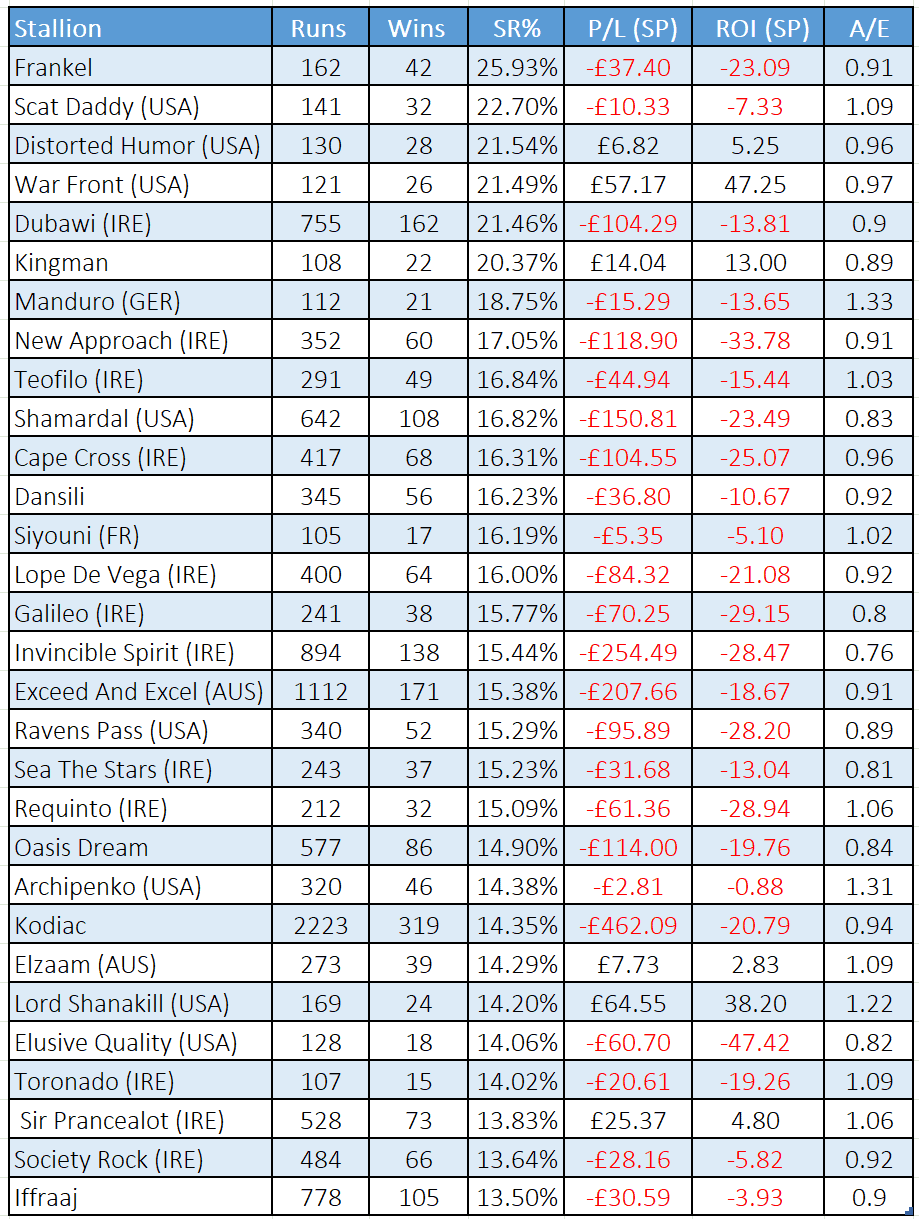 As one can see backing sires blind is the proverbial quick way to the poorhouse. Of course these figures could be improved by using Betfair SP, but as we know with Betfair SP, the occasional huge-priced winner can skew the stats. The key stat to look at in the table is the A/E index: the higher the A/E index the better things may be from a backing perspective; any figure above 1 suggests a positive scenario. Archipenko stands out with not only an A/E of 1.31 but, with over 300 runs, this is a decent sample size too. Interesting, Archipenko roughly breaks even if backing all runners ‘blind’.

Now a look at the sires with the lowest strike rates: 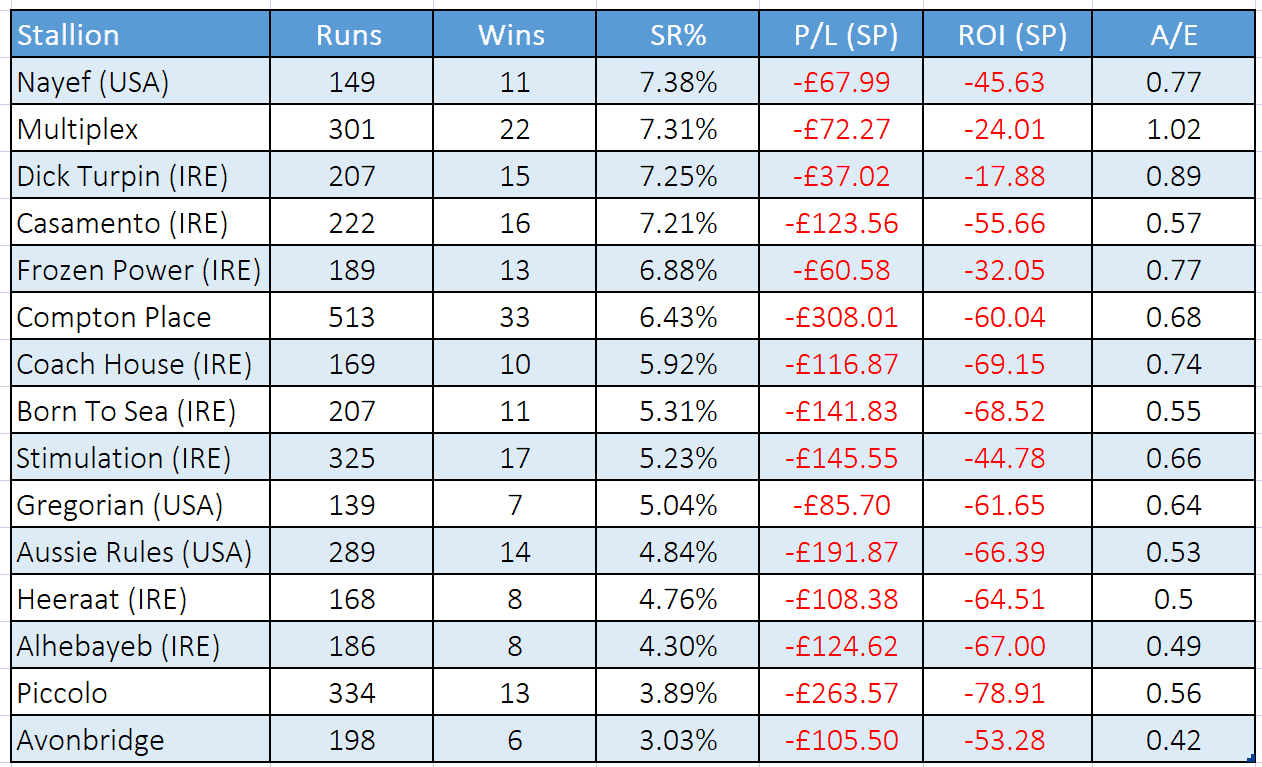 Not surprisingly these results produce dreadful returns for backers and in general also have very low A/E indices.

These raw stats indicate a huge discrepancy across the spectrum of sires. Having an appreciation of sire data should help inform our betting considerably in 2yo races so let's dig a bit deeper.

Firstly let us look at turf versus all weather and a look at sires of 2yos that perform significantly better on the turf compared to the all weather. The table below compares the turf strike rate (SR%) with the all weather SR%. In the final column I have divided the turf SR% by the all weather SR% to give us a type of Impact Value. It is not a ‘true’ IV so I’ll call it a Comparison Strike Rate (CSR). The higher this figure the stronger the sire’s liking for turf over the sand. 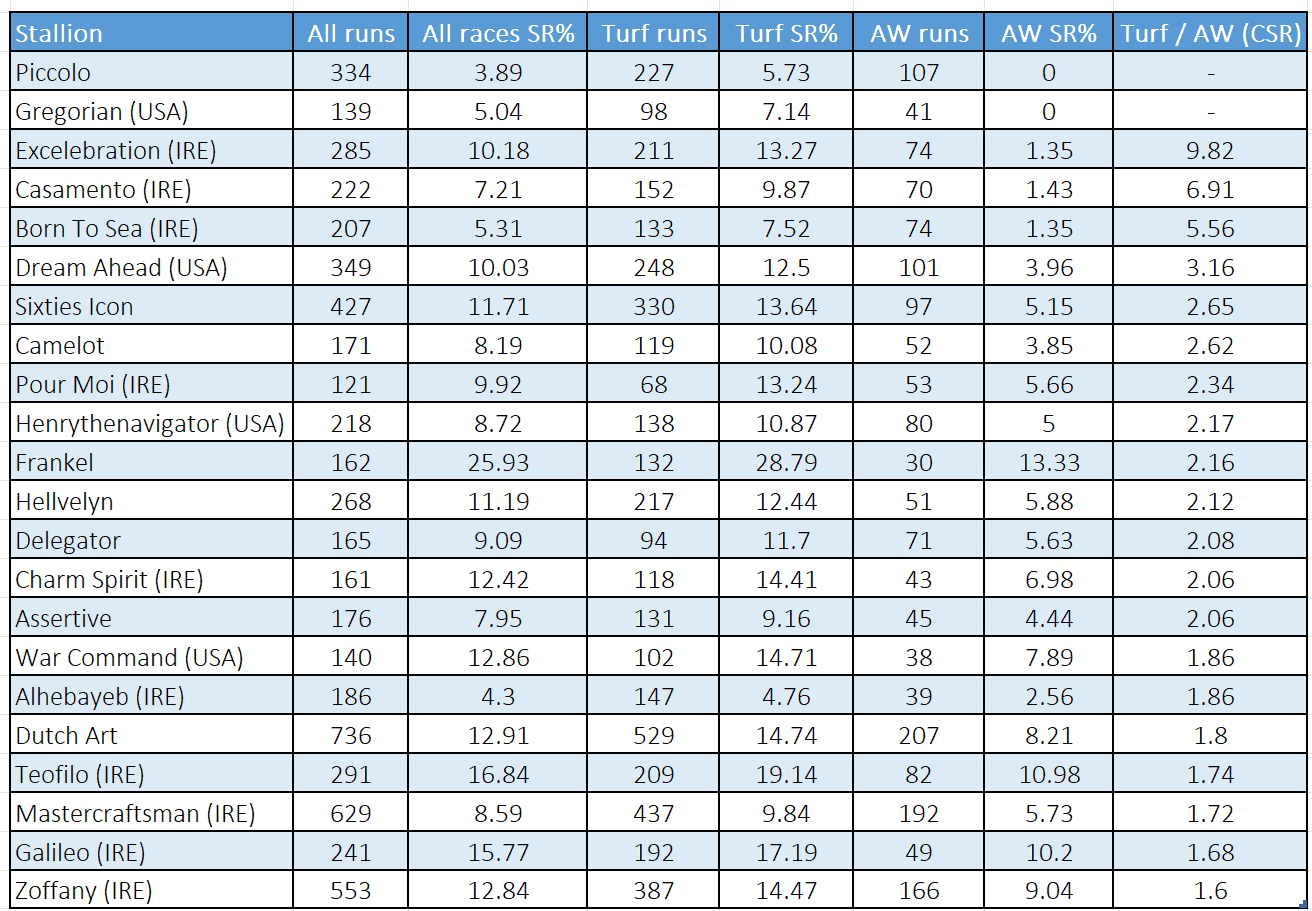 The two sires at the top, Piccolo and Gregorian, have not had one winner on the all weather in the UK in the study period; however their turf strike rates are both also low and that should be taken into account. Sixties Icon and Dream Ahead are the two sires that initially catch my eye; mainly due to decent sample sizes. Those two, along with Dutch Art, are sires worth further exploration. If we look at the respective A/E indices for turf 2yo races there are some sires in the list that achieve a score of 1 or more: 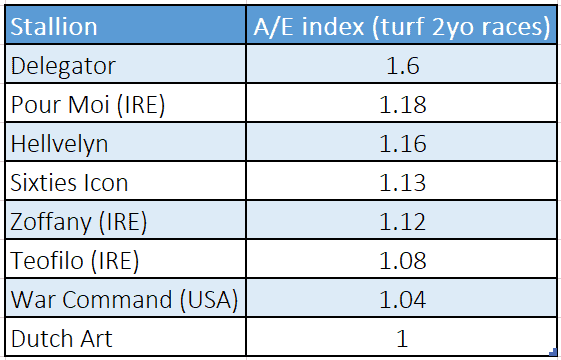 It is promising to see Dutch Art and Sixties Icon in this table; for the record Dream Ahead’s A/E stands at 0.86. Delegator has an impressive figure and also looks worthy of closer scrutiny.

Now a look in reverse at the sires of 2yos that perform significantly better on the all weather compared to the turf.

Once again there are some eye catching figures in the table. Dragon Pulse has an impressive record on the sand albeit from a relatively modest sample of 73 runs. However, if we focus on his runners that had previously run at least three times his record reads an impressive 13 wins from 46 (SR 28.3%) for an SP profit of £44.26 (ROI +96.2%); A/E index 1.62. Lethal Force is another interesting sire on the sand especially when you compare his male runners to female runners – male runners have won 22.9% of their races (11 wins from 48), while female runners have won just 6.9% (4 wins from 58).

A look at the A/E index for these runners on the all weather makes for positive reading: 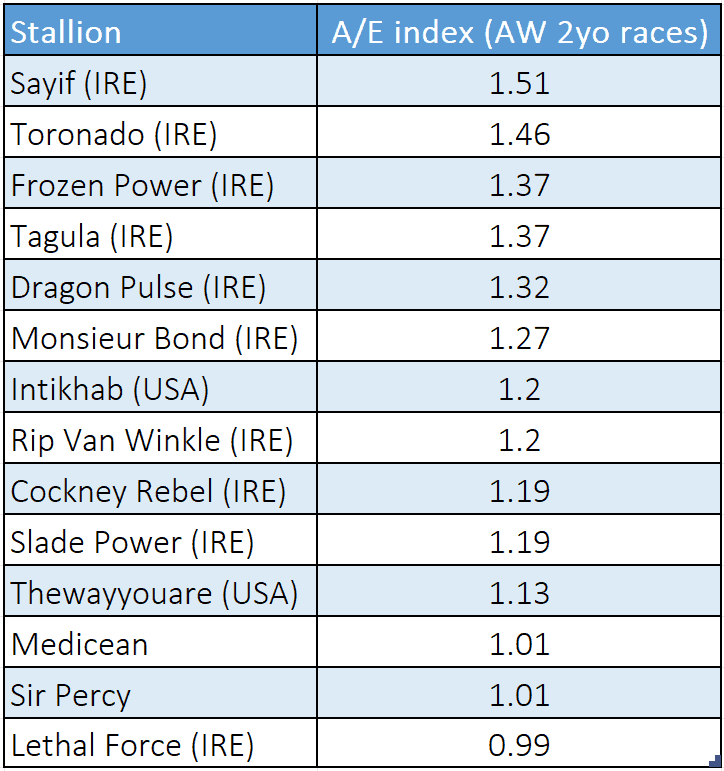 Just Lethal Force slips below the 1.00 figure, and even then only just. It is clear that these sires are a group to keep an eye on in 2yo all weather races.

Let us move on to look at the difference between horses making their debut compared to those having their second career start. It will come as no surprise to see a big improvement in strike rates from first to second career start. Looking at all 2yo runners the debut SR% is 7.07% and the 2nd start SR% is 11.81%. Dividing the second percentage by the first we get a CSR. of 1.67. This is our baseline CSR for comparing the figures in the table below.

I have used a minimum of 50 debut runs to give us enough data to work with and the sires in this list have the highest CSR. figures: 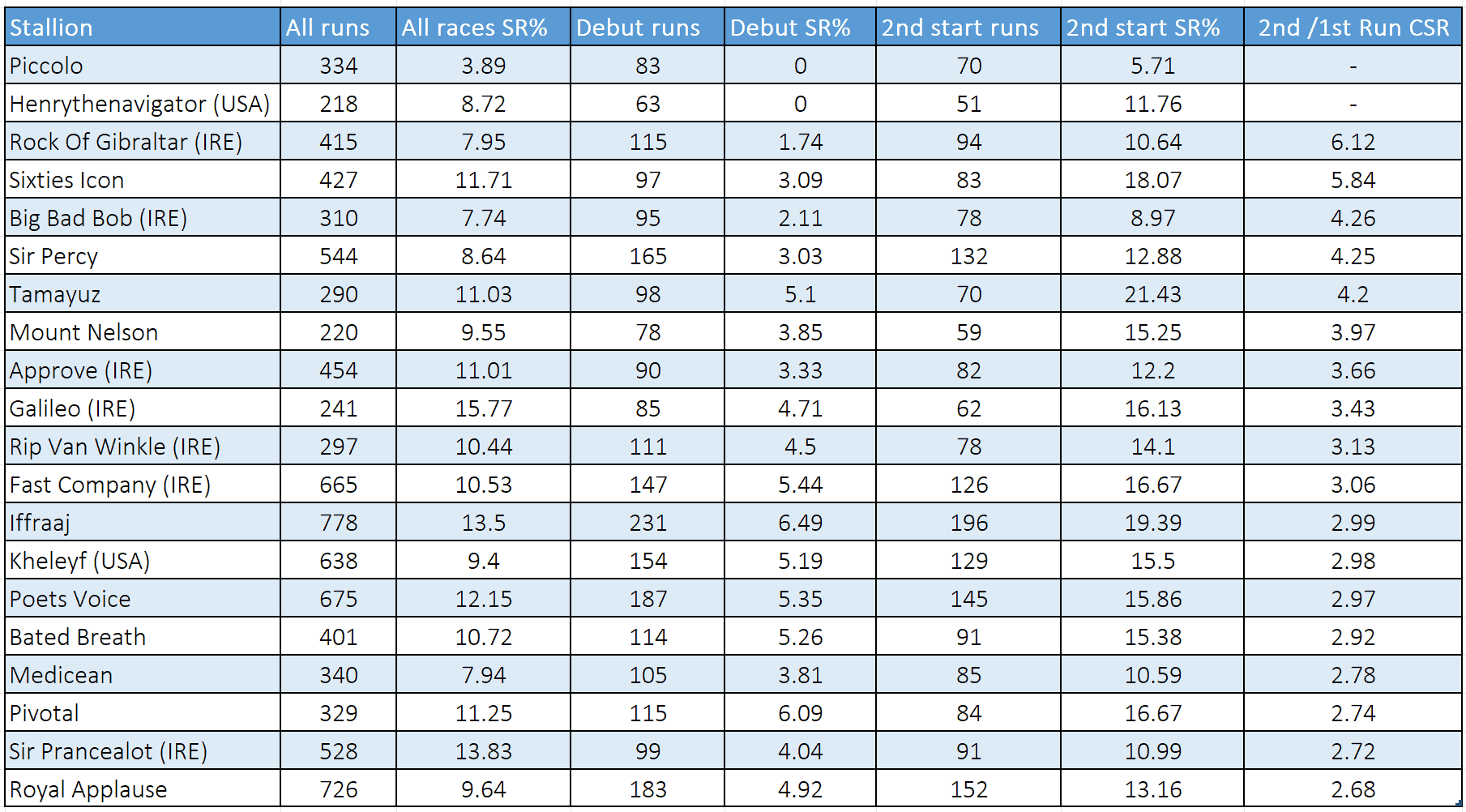 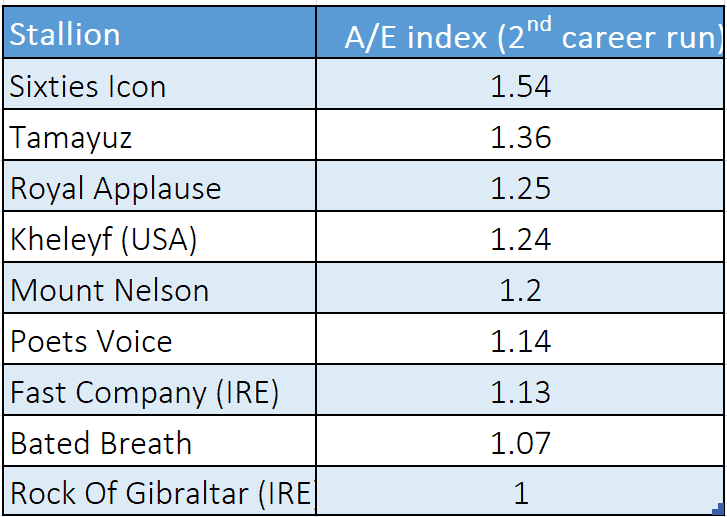 There are a handful of sires that buck the trend in terms of 2nd run improvement and have a higher SR% on debut compared to next time out. Such sires are few and far between but the five in the table below are worth sharing with you:

The A/E indices for these five sires with runners on debut are shown below:

Australian bred Epaulette is potentially a sire to note on debut it seems, as is the other Aussie sire in the sample, Helmet. Interestingly, perhaps, when priced 10/1 or shorter Epaulette’s offspring have provided 7 wins from 20 for a profit of £27.38 (ROI +136.9%).

2yo Sires: Male vs Female runners

For my last comparison in this piece let us look at male runners versus female runners. Taking all 2yo races into account male runners slightly outperform their female counterparts (12.2% to 10.1%; S.I 1.19). If we ignore geldings then the colts (males) have a slightly stronger edge over the fillies (females) – 13.2% to 10.1%; CSR. 1.31.

Let us look at those sires whose males have a particularly strong record according to their CSR. figure:

If we now look at the A/E indices we see that 6 of the sires have achieved scores in excess of 1.00. Delegator has a very high figure at 1.93: 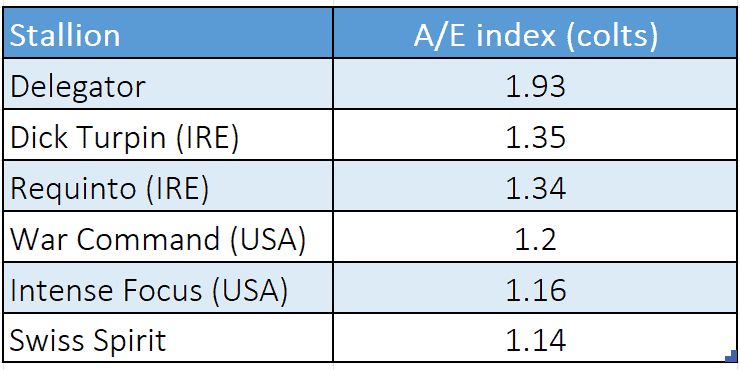 Delegator is a relatively new sire (2019 will be his fourth full season), hence data is in fairly limited supply. Having said that, if you ignore debut runs his 2yo colts record to date has been 10 wins from 45 (SR 22.2%). Focusing on those starting 14/1 or shorter this improves to 10 wins from 25 (SR 40.0%); A/E 2.63. This feels a bit 'convenience fitted' but it may be worth keeping an eye on going forwards.

Now a look at the sires where their mares outperform the colts – a smaller list:

The top three in the list - Hellvelyn, Power and Siyouni - have extremely high Comparative Strike Rates although Siyouni has only had 30 runs for fillies so these figures may level out over time.

Using sires to help unravel 2yo races is a ‘must’ in my opinion, though with generally limited data to work with we are forced into forming loose opinions which may later prove unfounded. Such is the nature of equine competition forecasting!

Of course there are other factors to consider, trainers being the most obviously important one. However, in order to get an edge on our fellow bettors, we must never ignore sire data when wagering in unexposed juvenile races.

A correlation between trainer and sire?