When the going gets tough...

I backed a winner yesterday. Believe me, if you've endured my recent form that's more a resuscitation than a boast or, heaven forbid, an aftertime.

Anyway, it won at 10/1 after I'd backed it at 7/1 (ever the judge, me), and it reminded me of an old post I wrote which was the inspiration for yesterday's bet as well as many other good ones in the interim.

That post is below, refreshed and updated - including a very appealing update on the systematic suggestion originally posited on 31st January 2014, three years less a fortnight ago.

Heavy horses are a breed apart

Rain, rain, incessant infernal rain. It seems just now - and, actually, at around this time most years - that pretty much all of the jumps racing is either abandoned or run on heavy ground.

Well, guess what? It's a load of old cobblers. What those naysayers are implying is that they find it difficult to deal with a change in the ground. Me? I love it, because it often makes the job of handicapping easier, not harder.

Let me expound on that.

Heavy ground is the most extreme level of sodden turf on which horses are asked to race. Whilst it takes on varying degrees of mud and splosh depending on the track, it is always more testing than merely 'soft' ground. So, whereas most horses can be expected to perform, at least to some degree, on middling terrain - good to soft, good, and good to firm - only a subset of the equine population will perform close to their optimal on very quick or very slow turf.

In this study, I'm going to focus specifically on National Hunt handicap races, for two reasons:

1. There are not that many flat handicaps run on heavy ground (though results are similar to the below)

2. In non-handicap events - novice races and the like - it is as likely that a horse outclasses its rivals as it is that a horse 'out-acts' its rivals on the prevailing squelchy grass

Let's first look at the performance of horses in handicap races being run on heavy ground. The table below is sorted by number of previous heavy ground wins.

As we can see, the vast majority of horses have yet to win on heavy ground, and many of them will have never encountered such a test before. Indeed, after failing on a first attempt in the deep, many will never encounter such a test again.

Whilst that is fairly logical and, in itself, not especially helpful, what is perhaps more surprising is that following multiple (two-plus) heavy ground winners in National Hunt handicaps run on heavy ground is a profitable strategy to embrace blindly, at Betfair SP or early prices at least.

Let me emphasise that with the following table:

Comparison of multi-mud winners versus 0 or 1 win

The American author, James Quinn, talks throughout his book, The Complete Handicapper, about 'the rule of two'. This rule, again entirely sensible and a very good way of avoiding bad value bets, is predicated on the market overreaction to a single instance of an event.

That could be a single good run, a single heavy ground performance, or a single bad run. Or anything else which has not been replicated or built upon before or since. Hence the two-plus heavy ground wins proviso demonstrates beyond reasonable doubt that a horse is likely to run to form on that sort of surface, all other things being equal.

How to optimize this knowledge

Getting to within 5% of parity at starting price with a simple stat like that opens a window of research opportunity through which we may be able to spot pockets of value.

One trick here, from a value perspective, may be to see if horses with a poor finishing position last time can improve the ROI. Focusing only on those runners which finished outside the top five on their previous start has a profound impact on the figures.

2+ heavy wins, outside the top five last time out

Firstly, it reduces the number of bets to roughly a half. Secondly, it retains an acceptable strike rate of 11% win and 27% place. Thirdly, the ROI is now around 10% on a meaningful number of bets at industry SP.

Mature. But not over-ripe...

Without tampering questionably with the dataset it is worth evaluating performance by age, as there do seem to be a fair number of octogenarians (in horse years at least) asked to persist with a fading career on heavy turf. The data bear that out: 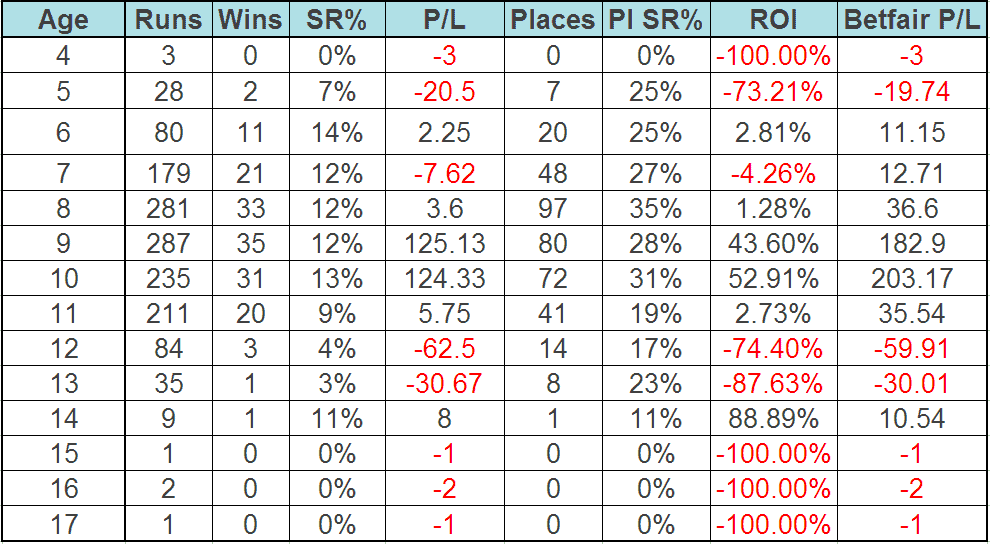 The strike rates for horses in the prime of their careers - from ages seven to ten (using the more reliable place strike rates as guidance) - are significantly better than their older and younger counterparts.

And, in case you were wondering, that shape is not replicated when one removes the 'heavy going' factor. Overall, horses tend to place at a fairly consistent percentage (c.25%) under the other conditions outlined above from ages four to six, before dropping to 24% aged seven, 23% at eight and 21% at nine and ten. Older than that and the general population running in this context hit the board at less than 20%.

It probably makes sense that most horses would mature into sloggers at a slightly later time than those naturally equipped to race on faster terrain, and that is certainly what the data say.

Focusing only on those horses aged seven to ten with proven (multi-winning) heavy ground form in NH handicaps who were outside the top five last time gives this:

Multi-heavy winners, aged 7 to 10, in NH handicaps, who missed the top 5 LTO

A 25% ROI on 1000 bets at starting price is pretty nifty. But, clearly, any approach with a 12% strike rate will suffer extended losing spells, and the figures above include two fairly painful downturns in 2010 and 2013.

One way to take the edge off that is to consider betting each way. Although not always a good strategy, with these fellows making the frame 30% of the time, it will definitely keep the shorter of bankroll engaged for longer, and help to ride out the worst of the inevitable corrections.

The 'rules' then, such as they are, go like this:

In terms of explaining the 'system' in a sentence - something you should be looking to do when developing your own mechanistic approaches - we can say the following:

"On extremely testing going, look for proven ability from a horse in its prime that may have been badly outpaced last time"

I appreciate that, for some, the age brackets and last day finishing positions may seem too arbitrary. Fair enough, though it is worth noting a 'tapering' in the datasets at the edges of the ranges which lends a credibility to the numbers.

Regardless of that, one thing is clear: if a horse has shown it can win on heavy ground, and it ran a clunker last time, be prepared to forgive that clunker back on the quaggy stuff.

Finding this kind of horse

So, how to find these diamonds in the mud? Why, with the geegeez racecards of course! Here's an example from last week. 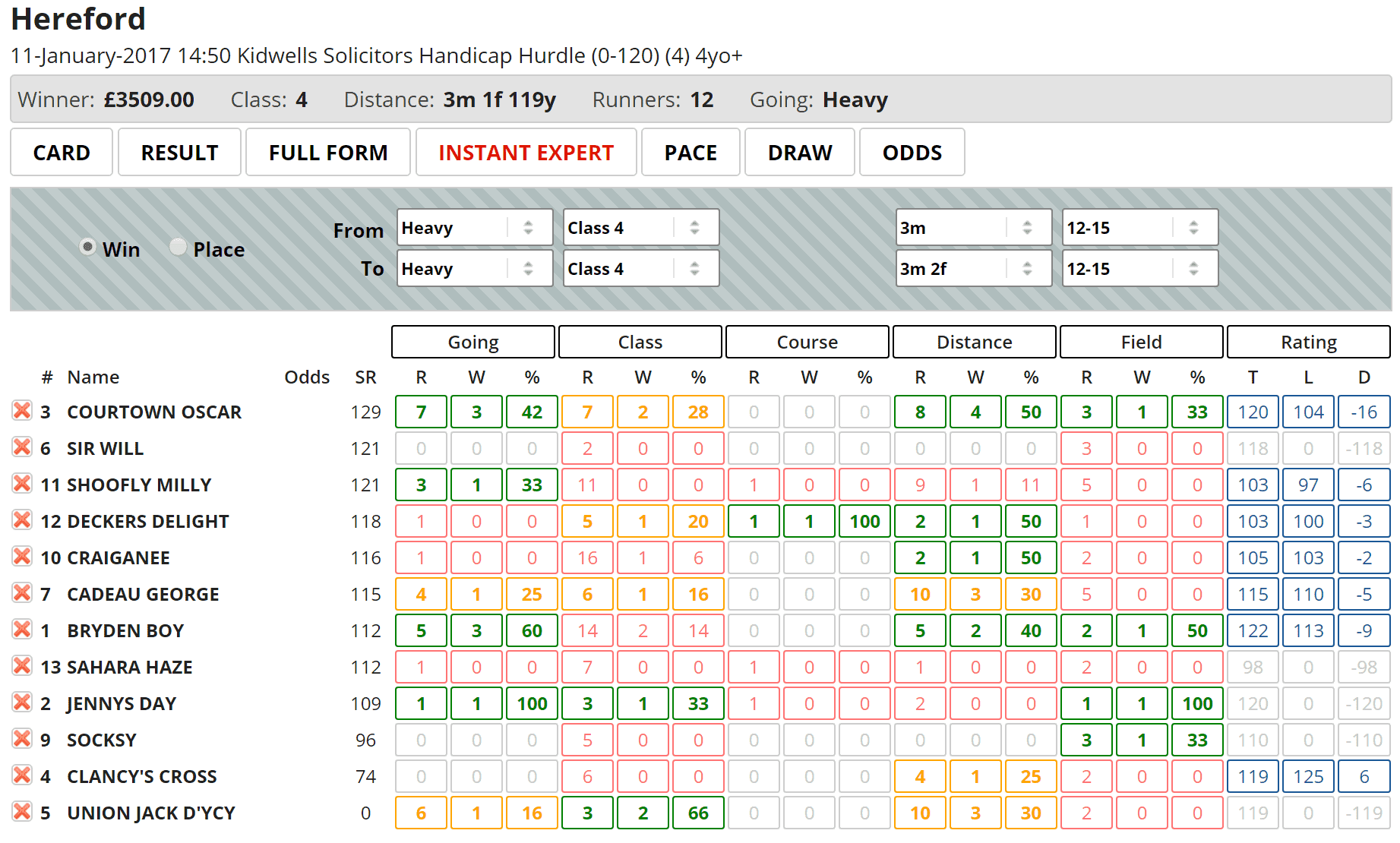 The Instant Expert tab reveals that Courtown Oscar was one of only two horses to have previously won twice or more on heavy ground, the other being Bryden Boy. But looking at their respective last time out figures, we can see that Bryden Boy won whereas Courtown Oscar was pulled up.

Also, take a look at how Oscar performed on heavy ground the last time he encountered it. 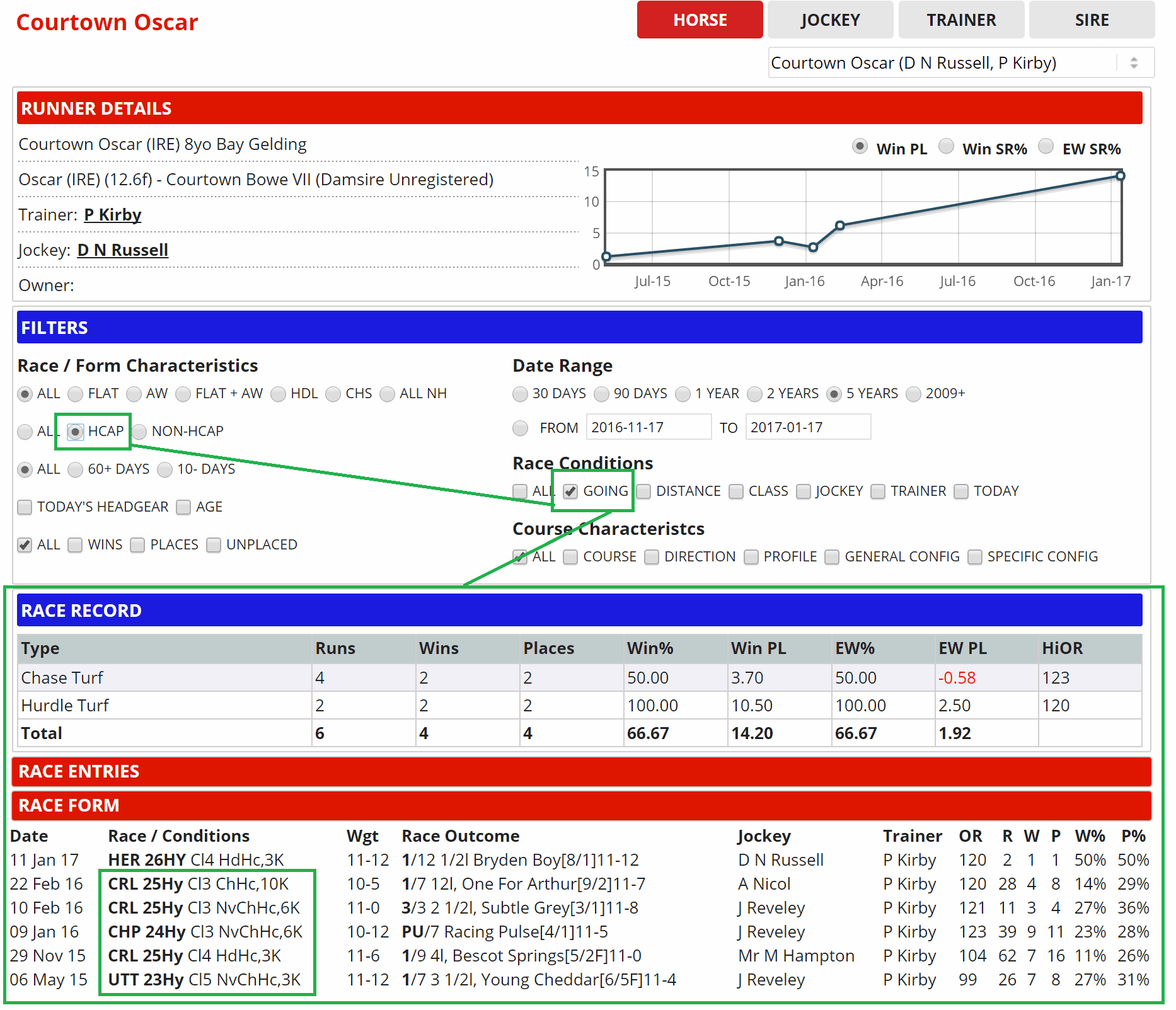 And if you look at the top form line in the image above, can you see who was second? Yes, Bryden Boy, the other multiple heavy ground winner.

[As an aside, One For Arthur - who Oscar beat on his previous heavy start - won the Warwick Classic Chase at the weekend; and Bryden Boy sandwiched his second place to Oscar with heavy ground scores either side. The form looks pretty solid!]

So, to recap, in order to find these horses:

You might also want to look at the overall previous form profile on heavy ground and, obviously, the depth of competition in the race from a going perspective. Though, looking purely through the system lens, that is not necessary.

Instant Expert and Full Form Filter are two components of the Geegeez Gold visual form book. If you're not currently a subscriber and would like to know more about what we offer, you can discover us here.

p.s. there's one runner today of interest in the context of the above... 😉