In this third instalment looking at pace biases at National Hunt courses, we will look at the picturesque Northumberland track at Hexham, writes Dave Renham.

When discussing the word pace my main focus is the initial pace in a race and position the horses take up early on. Some pundits talk about the running style of a horse: this is essentially the same thing.

The Pace Analyser and Query Tool on geegeez.co.uk are places where you can research pace / running styles to your heart’s content.

Pace data on the site is split into four – Led (4), Prominent (3), Mid Division (2) and Held Up (1). The numbers in brackets are the pace scores that are assigned to each section.

For this article I am again concentrating on data going back to 2009 with races of eight or more runners. My main focus when looking at pace will as always be handicap races, but for National Hunt racing if the non-handicap data indicates any biases I will share those data also. Hexham is the course in focus today.

The course is left-handed and a mile and a half in circumference and is considered to be severe and undulating. The hurdle course is shown below:

As can be seen there are six flights in total, three each in both the back straight and the home straight. The chase course has ten fences in its circuit and a separate home straight with a single fence to navigate.

There is a marginal advantage for front runners but in general this is a fairly even playing field in terms of early pace. The each way placed percentages are often an area I look at, and the graph below helps demonstrate how even the splits are here. The held up figure is lower but not significantly so.

That said, front runners have an Impact Value of 1.47 which implies they are almost one-and-a-half times as likely to win.

It is also worth sharing the non-handicap data at this trip as there does seem to be a pace bias:

There has been a definite advantage to those horses that have led or raced close to the pace (prominent). Quite often the reason for this is the fact that some non-handicap races can be rather uncompetitive, especially novice events. Having said that, these stats are strong and with good correlation between strike rates (both win and each way).

In the past few years they often move the rail so the distance here can change a little from the advertised two and a half miles. The handicap hurdle breakdown with eight or more runners over this trip looks thus:

If there is an advantage, it is towards prominent racers but, unlike the shorter trip, there seems little in it from a pace perspective.

However, when we dig deeper into ground conditions it looks as if there could be a pace bias against front runners as the going eases. On good to soft or softer, front runners have secured just one win from 35 runners: this equates to a very low win strike rate of under 3% and poor A/E and IV values of 0.35 and 0.31 respectively.

The handicap hurdle data over this longer trip looks like this:

We see that front runners and prominent racers have a clearly superior record here with a good correlation across all stats. If you had managed to predict the front runner in each three-mile handicap hurdle here since 2009 you would have been rewarded with excellent profits both for win and each way wagers. Easier said than done, of course!

Below is a graphical representation comparing strike rates (win & ew) for each pace figure over this trip which emphasises the positive correlation: 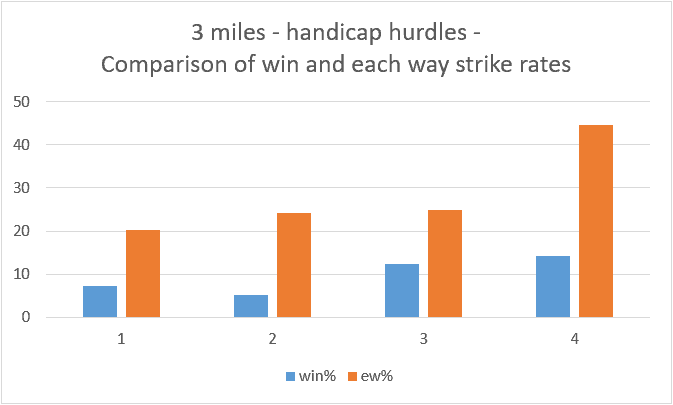 Before moving onto chases, it should be noted that this front-running edge seems to strengthen on better ground, whereas prominent runners fare much the best when it is more testing.

Over the bigger obstacles at Hexham they primarily race at the following three trips - 2m , 2m 4f and 3m. There is one race each year over the marathon four-mile trip, too.

Up until 2015, they officially raced over 2 miles ½ furlong so I have grouped the data together. There have been 40 qualifying races (8+ runner handicap chases):

This is one of the strongest National Hunt pace biases in the country; not only do front runners enjoy a huge edge, but horses that race in the second half of the field early have a quite dreadful record. The pie chart below gives a powerful pictorial representation of the bias (it shows % of races won by each pace section): 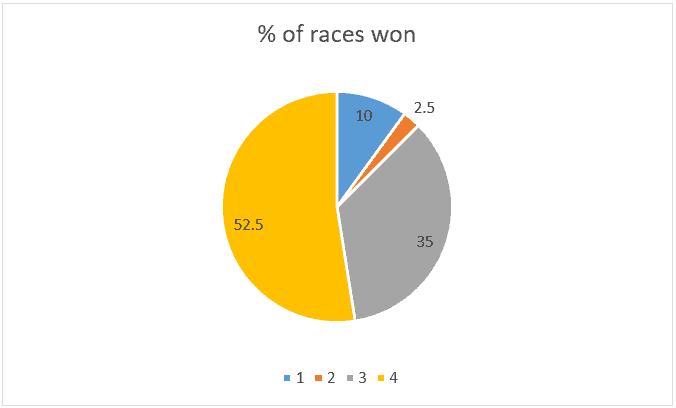 Good luck if you're backing a patiently-ridden horse in a Hexham two-mile handicap chase!

When the going is on the soft side, the message is even more stark, as if that was even possible:

There have been a decent number of handicap chases with eight or more runners over this trip (59 races in total). Here are the stats:

Another very solid bias to front runners who again show a clear edge. It is not as strong as the shorter distance but still extremely significant. Prominent runners also have a reasonable record while hold up horses have at least been more competitive than they were over the shorter trip.

Up until 2015 they officially raced over 3m1f as well and I have incorporated those stats with the three-mile figures. The handicap pace splits are as follows (8 + runners):

This longer trip still readily favours pace horses but the strength of bias against those that are waited with is not as strong as over the two shorter distances.

There have been only eight handicap races over four miles and the data is far too limited to dig into.

In conclusion, the running style bias towards those leading and/or racing prominently at Hexham is far stronger in handicap chases than it is in handicap hurdles. Here is one final graph comparing win and each way strike rates between front-runners and hold up horses in handicap chases over the three different distances: 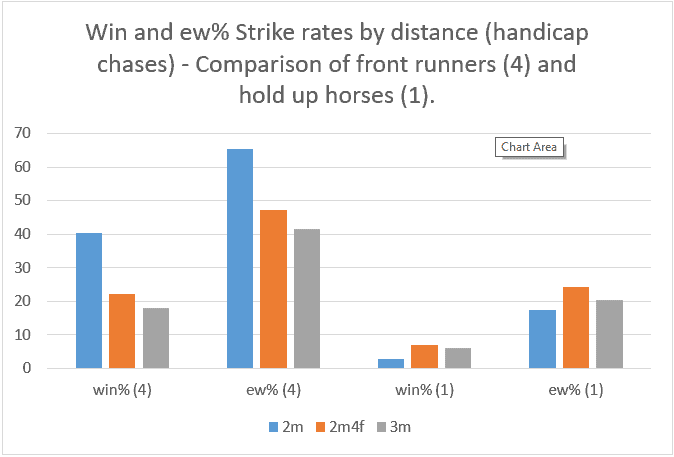 The graph beautifully illustrates that

a) the front-running bias is strong across the board,

b) the pace bias does diminish a little as the distance increases; and,

c) front-runners have a significant edge over hold up horses regardless of distance.

Hexham is definitely a course to keep an eye on from a pace perspective.