It's Newmarket's Future Champions Weekend today and tomorrow, comprising eight races restricted to two-year-olds only. Such contests are notoriously tricky from a betting perspective, because we have little or no form to go on. Worse, most of the contenders are still unexposed to a lesser or greater degree meaning they can be expected to improve on what they've demonstrated so far. So how do we frame a puzzle like this?

The first thing to say is that, personally, I'm not a massive fan of such heats. I prefer an established level of form in the book, with only one or two possible (and predictable) improvers: for instance, a low grade handicap with a horse stepping up markedly in trip and another running for the first time in a handicap after a month off the course.

But still, there are times when I'm forced to have a view on races with little form, the most everyday of which is when selecting a six race placepot sequence.

Here are six ways to get a handle on a minimal amount of form... Oh, and by the way, most of these approaches apply equally to a novice hurdle at Chepstow in January as they do to a juvenile Group 1 in October at HQ, so keep an open mind in terms of the usable context of these hints.

The most obvious and logical place to start is always the form book. Incomplete as the picture may be, the basic ability indicators are located right there. The Instant Expert, which I would never use as 'alpha and omega' for this - or indeed any - job, does offer a view on the story so far. As you can see from this example, taken from tomorrow's Autumn Stakes, it is only a partially complete puzzle. 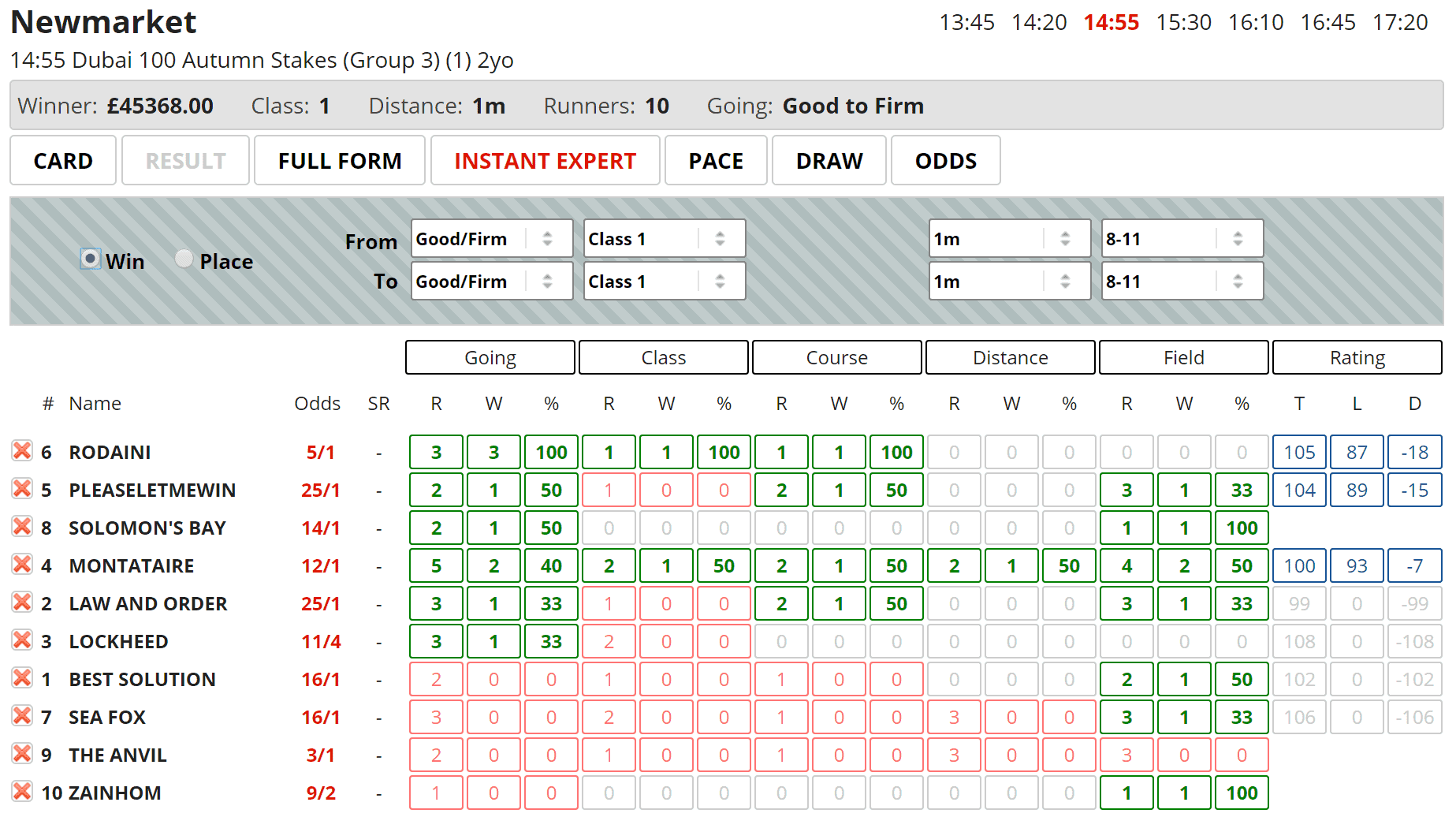 On the win view, it would be easy for an inexperienced - or cursory - eye to discount The Anvil's chance. But the place view, superimposed below for contrast purposes, reveals a very different opinion on his prospects.

Closer inspection of his most recent form line informs that he was a fast-finishing second over course and distance last time out in a better race: a Group 2 compared with today's Group 3.

However, getting back to the main image, we can also give Montataire a chance. He is the most exposed in the field, with eight runs already to his name, and he's achieved more than most of these. The question is whether he is now susceptible to those who have a lot more to come and, on the evidence of his last run - behind The Anvil - the probability is that he is.

Although, like with the form in the book, the race times in the book are a retrospective on the contenders which fails to account for future improvement, they can be very useful for two reasons.

Firstly, it is often hard for the casual punter to discern between one set of form figures that read '11121' and another. Naturally, we should be more sophisticated in our outlook than that but, largely through conditioning - looking at very partial racecards in the printed press, predominantly - the eye still wanders to the numeric string at the left of a horse's name.

Ratings, especially speed ratings in juvenile races, help us to form a hierarchy from the pile of similar looking form figures.

Secondly, because most two-year-olds are inexperienced and immature, they tend to race 'with the choke out' (i.e. the go as fast as they can for as long as the can, with limited ability to proportion their energy for the task in hand). This means that most juvenile races - typically run at five to seven furlongs before October - are not tactical and the numbers are generally more reliable than might be the case in longer runs.

Here's an example for this afternoon's Cornwallis Stakes, to be run over the minimum trip of five furlongs. Battaash is the highest rated on Geegeez Speed Ratings (SR column, his rating 94), and we can see that his only poor run was on soft ground. We can also see that he's 16/1.

He's not raced on good to firm ground before, so that's a question mark - one that we will look at shortly - but he might be overpriced. At least we know he can run fast in what will be a fast-run event.

Top Speed Rating, and 16/1 in the Cornwallis Stakes

Another way of separating the good 123's from the not so good 123's is to look at what has happened to the other runners in those races since the wins and places were achieved. Here at geegeez, we use something called 'Then What?', which you can see in Battaash's form lines above, and also in the below: a view of the form for those to have previously run in the 4.20 this afternoon, a maiden fillies' race. 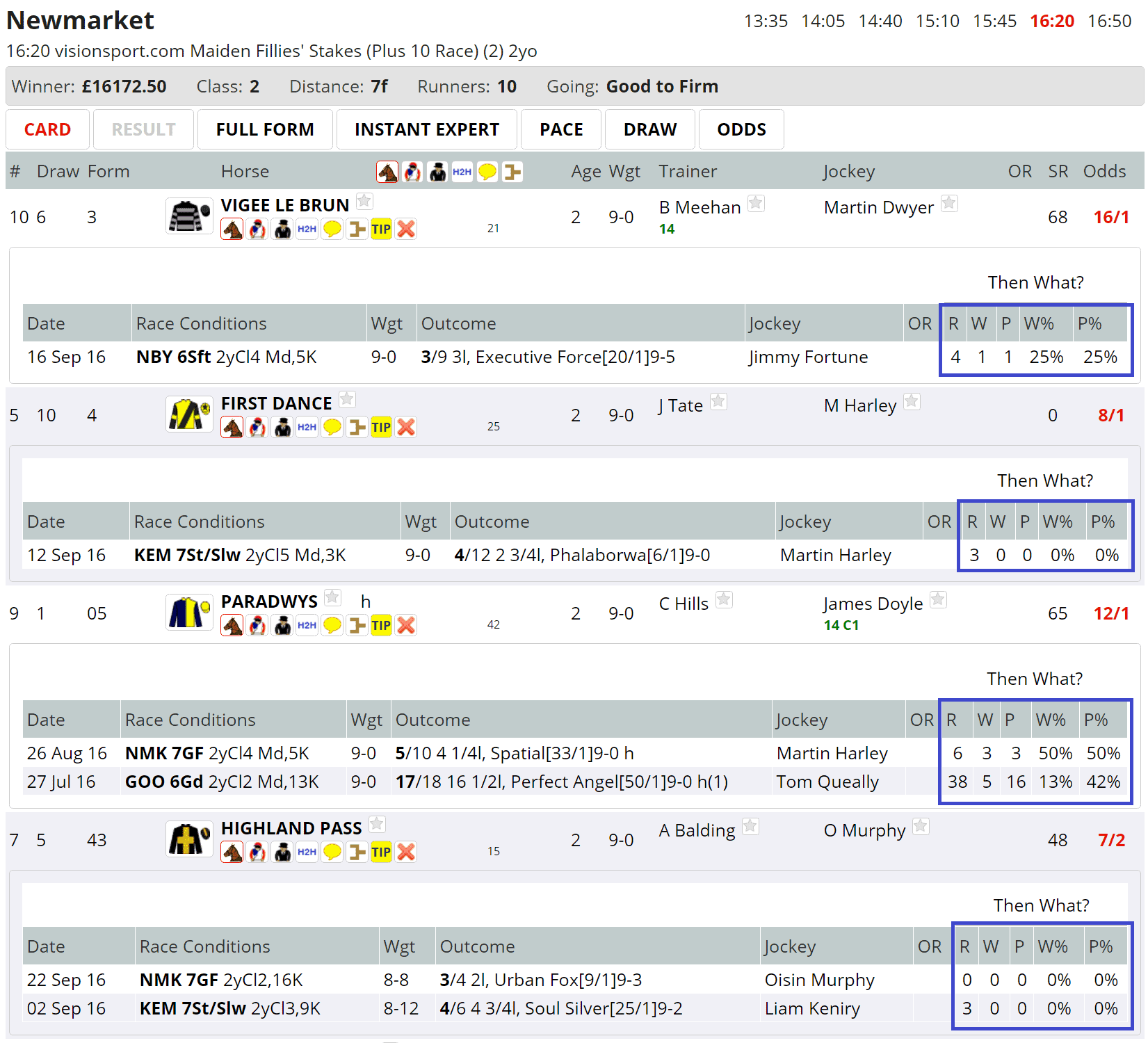 Which of the runs so far have worked out best? 'Then What?' has some suggestions

In the above, there are a couple of very interesting points to note. First, the favourite, Highland Pass, has run relatively slowly (48) thus far, and none of the three horses to come out of her races since have made the frame. It's a very small sample but doesn't light my fire when invited to accept 7/2 about her chance.

Compare that with the 68 and 65 rated fillies - the top two speed figures in the field (though plenty are making their debuts today, more on that shortly) - and she has some stepping up to do.

Vigee Le Brun is top rated, and her run has seen one winner from four to exit the race to date. Note, however, that her prior start was on soft ground, versus good to firm today.

The 65 filly is Paradwys, whose two runs have worked out well. Moreover, the most recent was over seven furlongs on good to firm, on the July course here at Newmarket. Clicking on the form line opens up the result, where we can see that all of the runners to finish in front of Paradwys that day to have run again since, have won. Now that's more interesting; and she's a 12/1 chance! 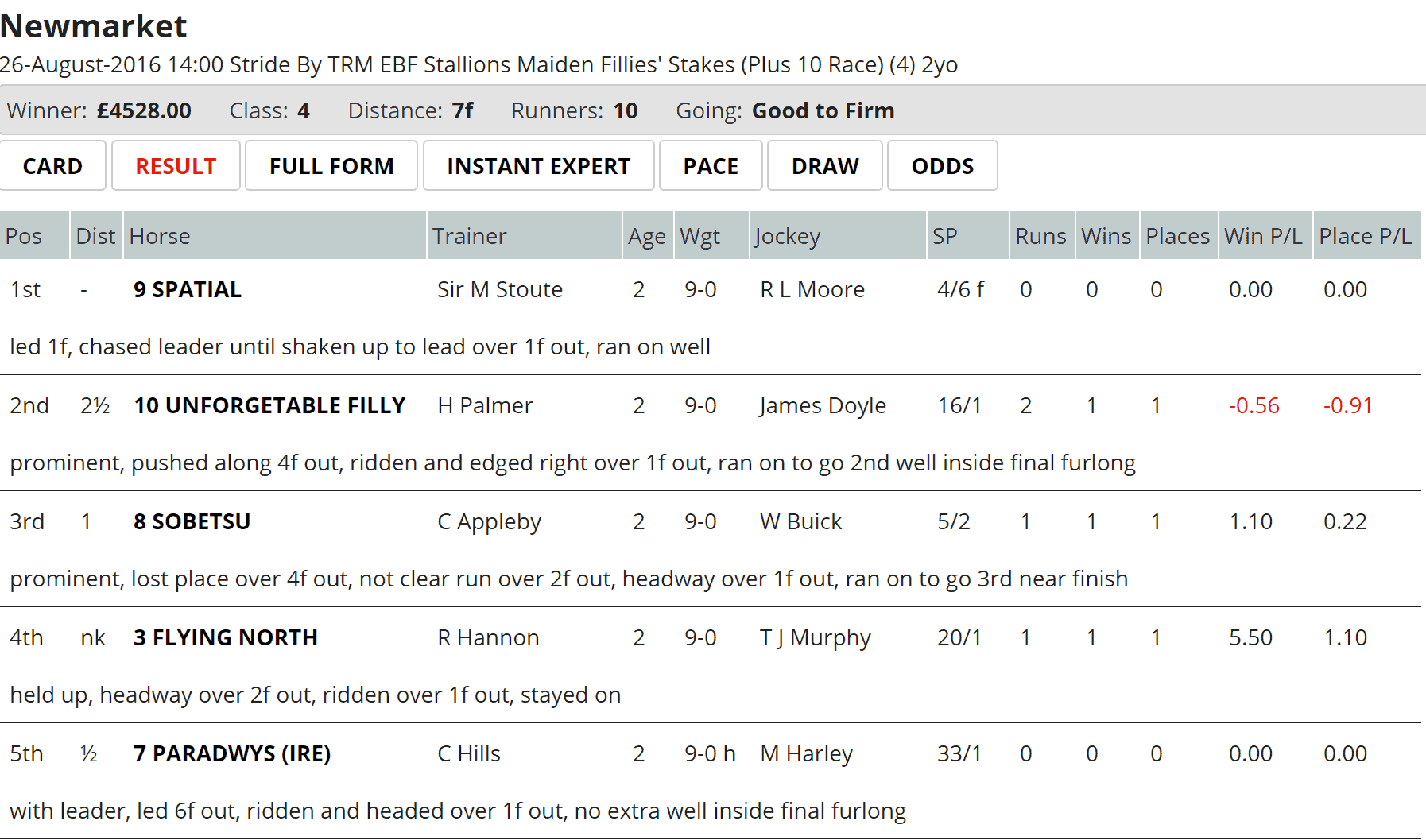 Will punters be in Paradwys this afternoon?

A horse called Fleabiscuit runs in the Group 1 Fillies' Mile this afternoon. She's run once, and she won. No horses have emerged from that race - less than two weeks ago - so how do we know if Fleabiscuit has a chance today?

Her speed figure gives her plenty to find but, with just one run to her name so far, she could step forward significantly. Take a look at her trainer's form:

Hugo  Palmer is in perma-good form. He's been scoring at a near 40% rate in the past fortnight, and better than one in four over the entire month. He has the champion jockey-elect riding for him, and note Palmer's 'snippets' in the blue box above.

They show his performance over the last two years under certain relevant conditions. For example, we can see that he's got a nigh on 30% win rate with last time out winners. Moreover, he has a 27% strike rate with horses making their second racecourse start.

These are rock solid numbers, as we might expect from geegeez's implied man of the year. Fleabiscuit is probably not experienced - or talented - enough to win a race of this stature so early in her career. But she's not definitely not, and at 20/1 her trainer's record offers cause for optimism.

Earlier in this post, I mentioned a filly called Vigee Le Brun, whose one run came on soft ground, as opposed to today's good to firm. How could we know if she'll act on today's surface? The short answer is that we cannot know that; but what we can do is look to her sire for clues.

Dark Angel's Sire Snippets in the context of this race

We can see that Dark Angel has a close to 12% win rate overall in the last two years, which is incredible on 2264 runners. We can also see that two year olds and sprinters perform above the overall benchmark, at 12.22% and 12.63% respectively.

But what we can't see is how Dark Angel progeny have fared on good to firm ground. The reason for this is that the going can - and often does - change from when we publish this data to race time. Fear not, however, for we have that covered.

On the main race card, the going can be changed from a dropdown, and the revised going will reflect in both Instant Expert and Full Form Filter. In this case, we don't need to change the going, so we'll head straight over the FFF. 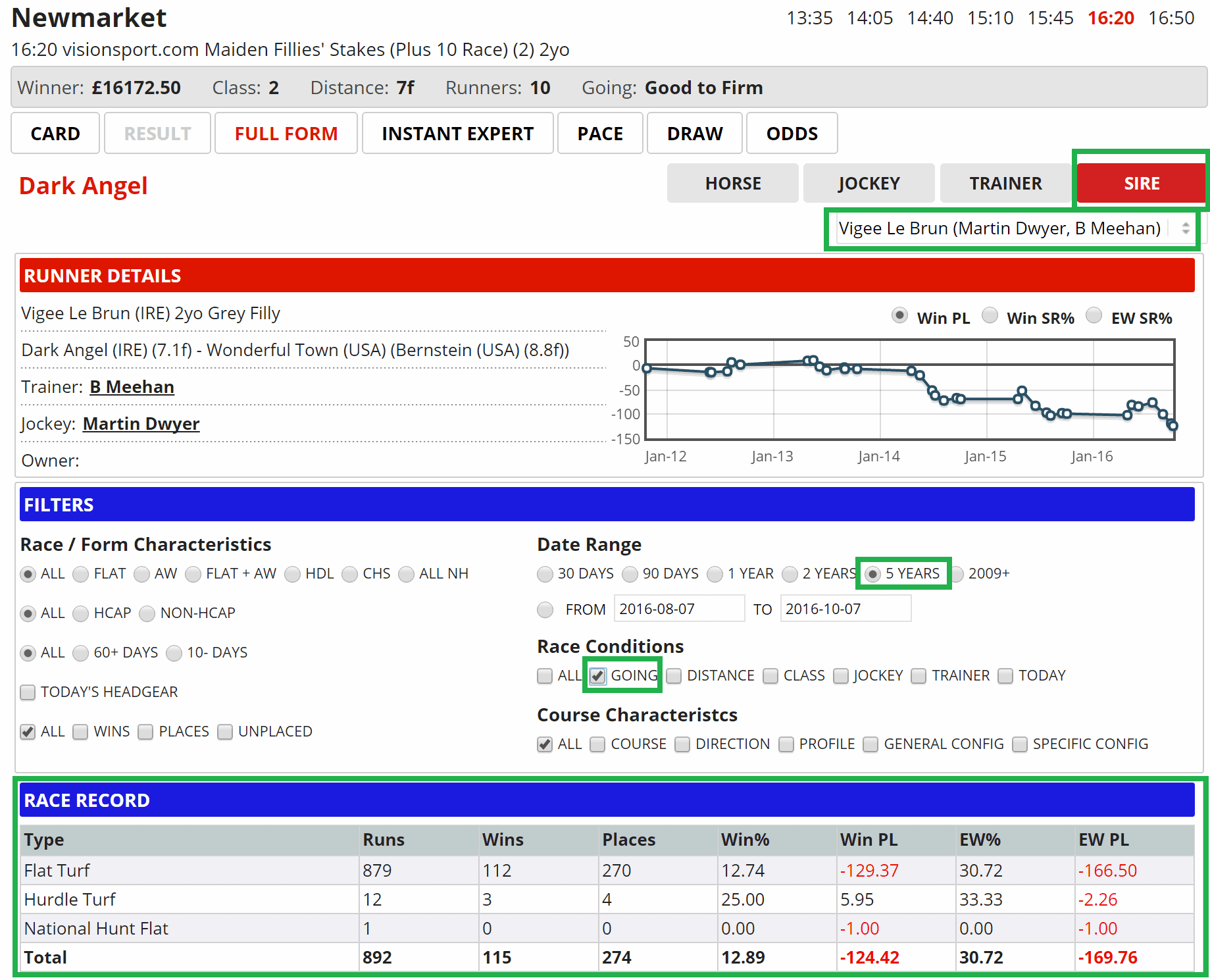 As you can see, I've selected the Sire option top right, chosen Vigee Le Brun from the horse dropdown, then 5 year form, and going.

The Race Record box shows me Dark Angel's five-year record on today's (good to firm) going. It's 12.74%, which is again some way above his two year batting average overall, offering hope to backers of this filly.

I could also take this a step further and add distance to the filter, to see how Dark Angel's have fared over seven furlongs in the last five years.

Interestingly, this drops the win percentage back a good bit, and upon checking the two year form I noticed that it is even lower, so that would be a concern.

Full Form Filter is a very flexible tool, and its sire option is one of the most under-used elements of the entire arsenal.

At the end of the day, in races where there is limited racecourse evidence on which to base a judgment, the market can be an insightful predictor. With a filly like Vigee Le Brun, I'd be very interested in whether she had taken support in the early skirmishes. Checking an odds comparison function, such as the 'Odds' tab on Geegeez, will shed some light. 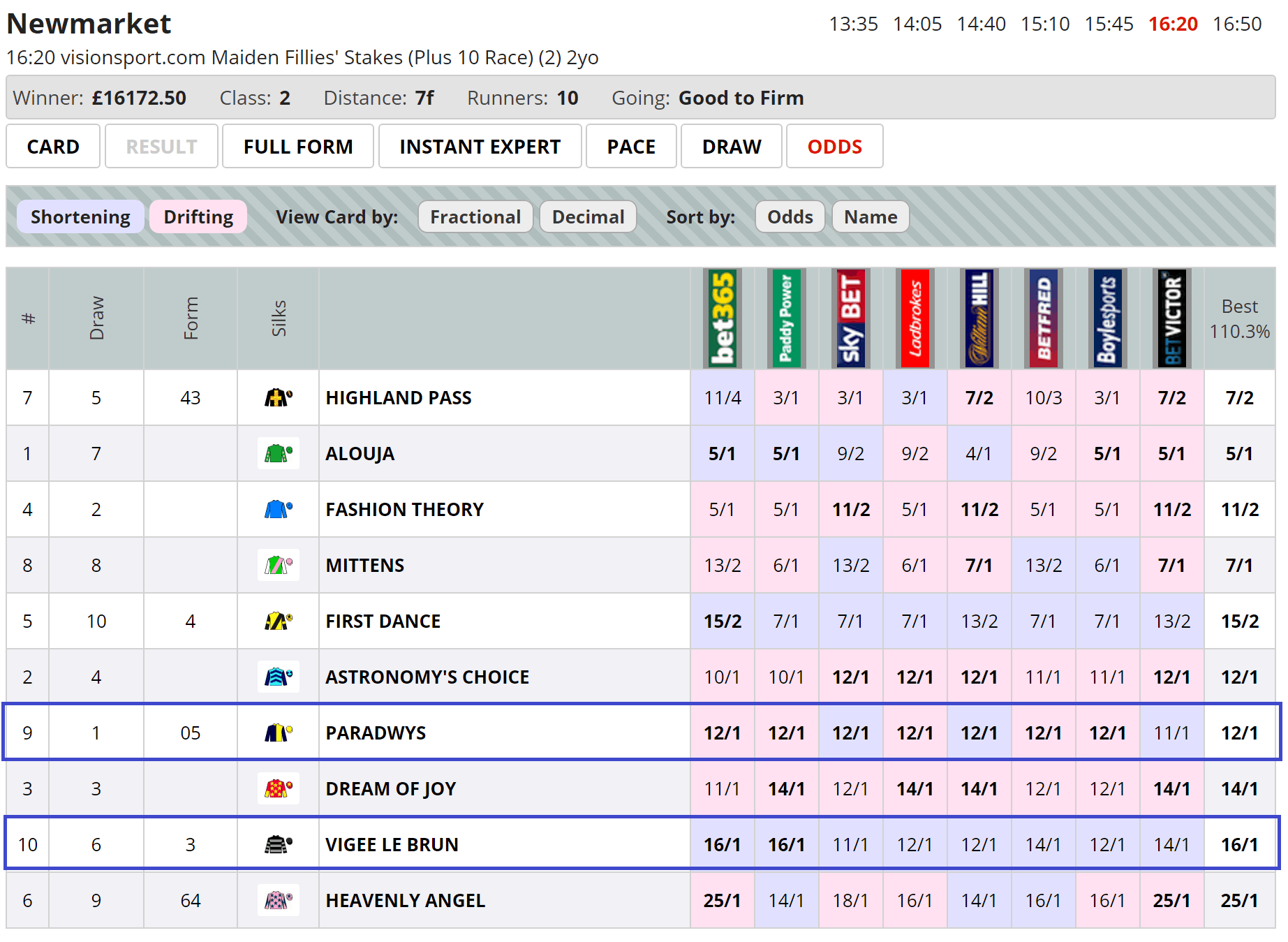 Both Paradwys and Vigee Le Brun have taken support

During the time I've been writing this post, we can see that both Paradwys and especially Vigee Le Brun have taken support. They're not the only ones to be fancied, but this certainly helps - with confidence if nothing else - in making a wagering decision, allied to what we've learned for ourselves in points one to five of course!

Many people, including myself, use Gold mainly when the level of form is thoroughly exposed. But I hope the six suggestions above offer some food for thought in terms of how we can get a few inside lines on those where it is all in front of them. Gold is full of hints, tips and pointers, for all types of race. We just have to go a little 'off piste' in some situations. 🙂