In this article I am once again looking into the subject of pace or running styles, which regular readers will know is an area of research in which I have a great interest, writes Dave Renham. As I have mentioned before, knowing how a race is likely to pan out in terms of a potential pace angle can be extremely useful for us as punters. It might help us highlight a value bet or, just as importantly, help us swerve a losing bet that we might have backed had we not realised there was a negative in terms of pace. I have used the pace angle more and more in my personal betting be it pre-race or ‘in running’ and although I am not a millionaire yet, it is the one betting angle where I consistently get an edge.

My pace articles to date on Geegeez have focused on specific distances with course biases being a key part of my research. For this article however, I will focus on jockeys. The reason I have decided to look at jockeys is that I believe that a jockey can make a difference in any race, especially when it comes to pace or running styles. How many times have you cursed a jockey for leaving it too late to make his final surge? How many times have watched a jockey set a clever pace up in front and manage to hang on for a pillar-to-post victory? Hopefully this article will identify some jockey ‘nuggets’ which will go on to help us with betting decisions we make on a daily basis.

For this article I have looked at five years of data (1/1/14 to 31/12/18) including both turf and all-weather racing, in the UK only. I have looked at all races (handicaps and non-handicaps) with six or more runners up to and including 10f (a mile and a quarter).

As a starting point let us see which jockeys took the early lead most often, in percentage terms. I have included jockeys who had at least 300 rides over this five-year period: 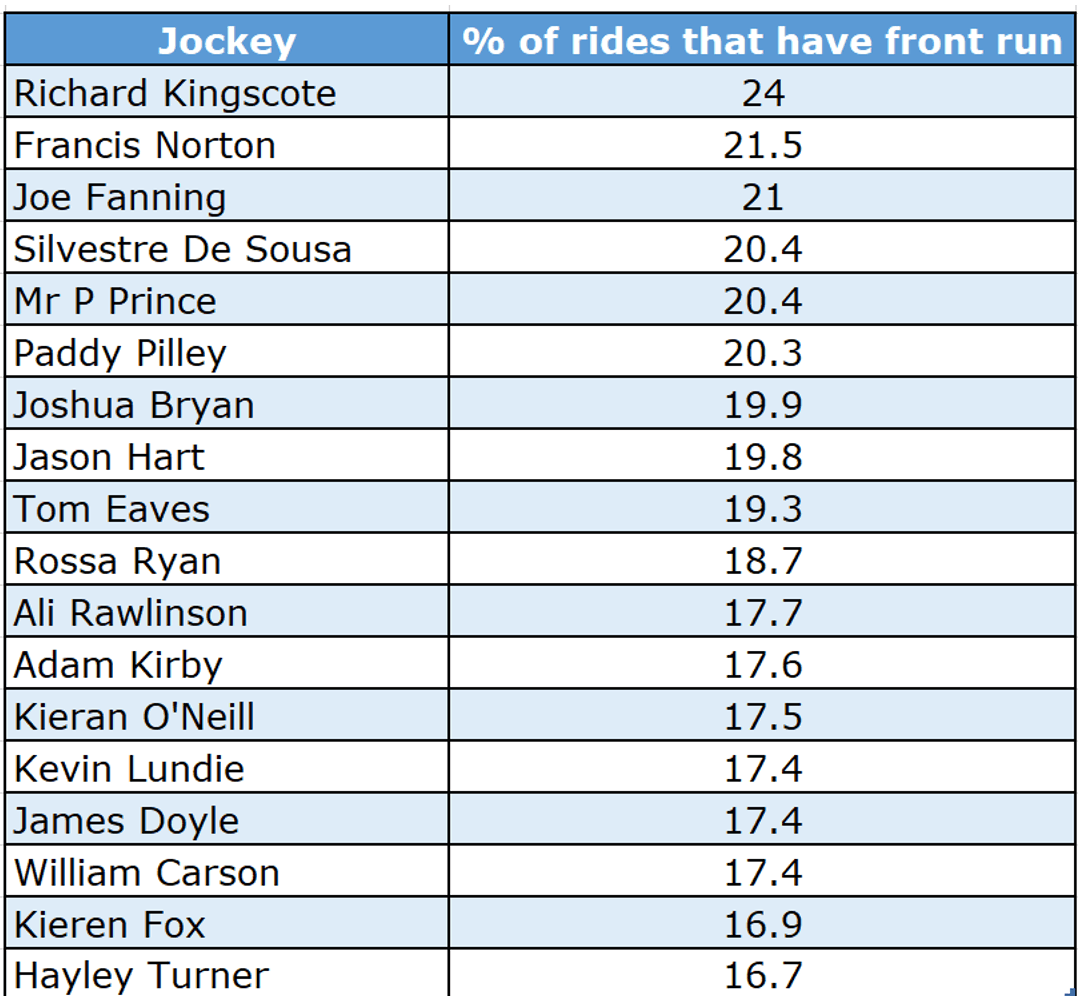 For comparison purposes the average for all jockeys in terms of taking or sharing the early lead is 13.7%. Hence Richard Kingscote takes the lead early nearly twice as often as the average.

Let us look at how successful Kingscote has been when he has taken the lead early in races at up to a mile and a quarter. I have broken the data down by race distance:

These figures are quite promising as Kingscote’s success on front runners is also above the average: his overall front running win rate was 19.9% in the study period, compared with an average win rate for all front running winners of 18%. So not only does Kingscote like ‘taking it on’ from the front, he is evidently pretty good at it too. I should point out that his record is particularly good at 8f to 10f, so take note when he is riding a potential front runner around that distance.

Joe Fanning lies third on the list in terms of percentage of front running rides. This should come as no surprise perhaps as over 40% of his total rides have been for trainer Mark Johnston. Johnston is a trainer who is no stranger to allowing his horses to front run. Indeed, when Fanning rides for Johnston he has taken an early lead over 33% of the time (494 rides from 1487). Let us now look at how successful in terms of win percentage Fanning has been when taking the lead early:

His overall win rate on front runners is actually better than Kingscote’s at 20.8% (when riding for Mark Johnston this increases to 23.5%); and he has recorded good figures across the board apart from the mile distance, which is probably an anomaly.

Now let us look at the jockeys that took the early lead the least (in percentage terms). As before I have included jockeys that have had at least 300 rides over this five-year period: 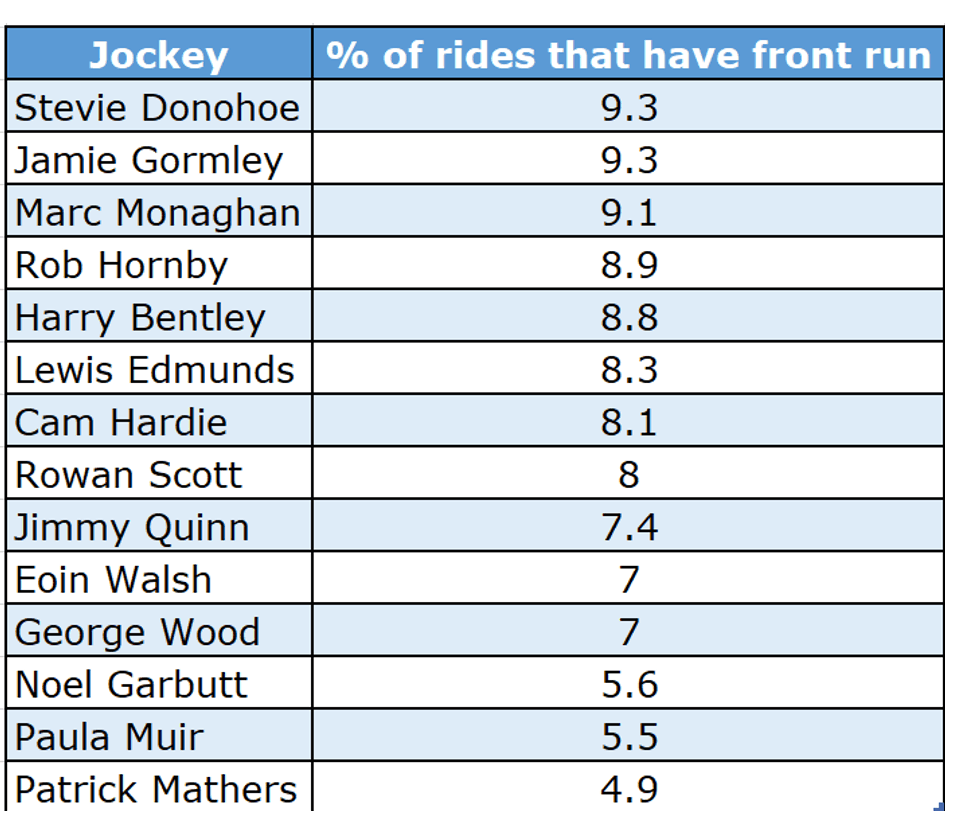 These jockeys appear reluctant to take their mounts to the front early, or perhaps ride a lot of horses who are simply not quick enough to get to the front. If I was planning to back a potential front runner, or indeed be planning to trade it, I would have serious second thoughts if one of the jockeys in the table above was on board.

Jockeys who get their runners to front run more often than most are definitely worth noting, but the jockey win percentages when on front runners are just as important if not more so. For example, if a jockey had taken the lead in 20% of races but won only 5% of them then this is far from ideal from a betting perspective; though from a ‘trading in running angle’, it is not so much of a concern. A jockey that has led in 12% of races but won 25% of the time when taking the early lead is potentially one to note from a betting perspective.

Therefore, let us now look at the top performing jockeys in terms of win rate when on a front runner (70 front running rides minimum): 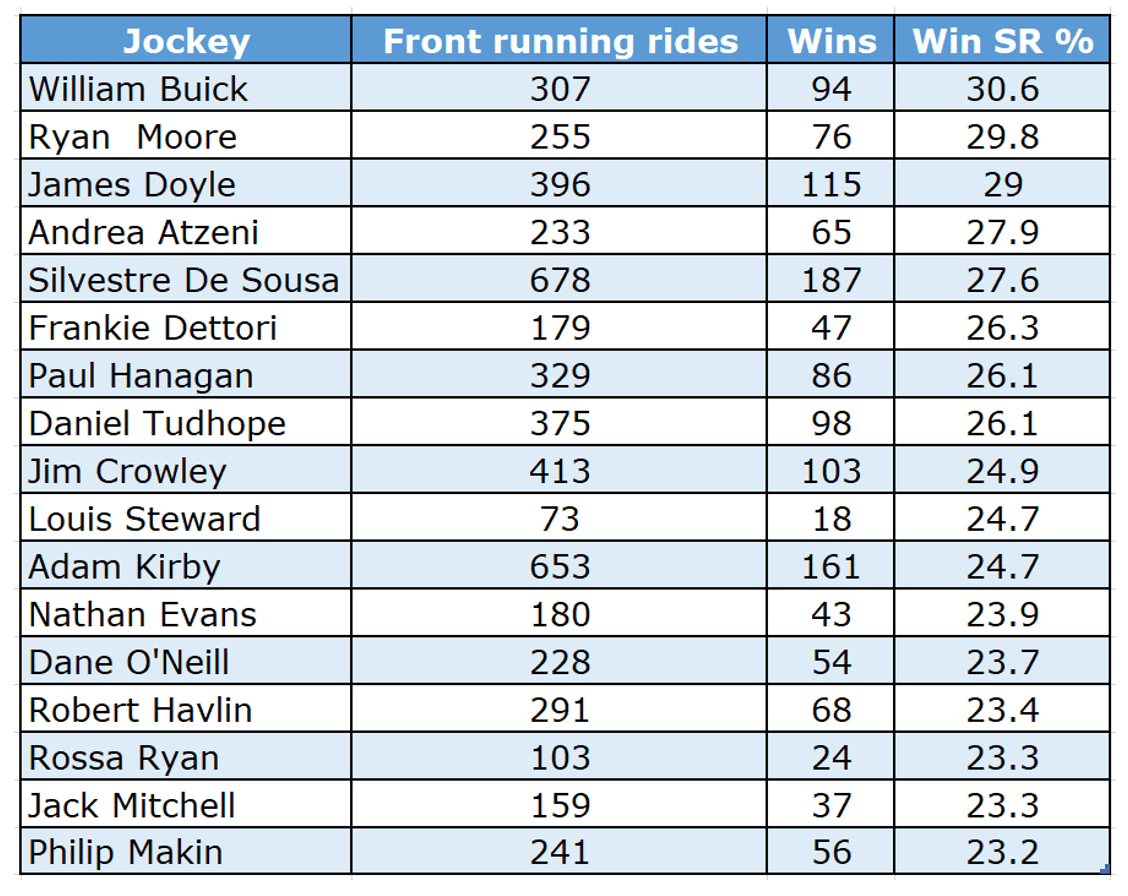 For comparison purposes the average win rate for all jockeys riding front runners in the review period was 18%.

William Buick tops the list with a highly impressive strike rate of over 30% of front running rides. He has been consistent across all distances, but especially in sprints, as the following table illustrates:

Silvestre de Sousa is a jockey I have long thought rides well from the front and his figures seem to back that up. His performance in small fields is particularly noteworthy: in six runner races when SdS has led early, he has gone onto win 35 times from 82 rides (SR 42.7%); in seven runner races his front running figures read 38 wins from 97 (SR 39.2%). To illustrate how good these stats are, we can compare de Sousa’s stats to the front running average win rate for all jockeys - this stands at 23.8% in 6 runner races and 21.9% in 7 runner races.

At the other end of the scale we have the jockeys with the lowest win % when on a front runner. Once again only jockeys with at least 70 front running rides qualify for the list: 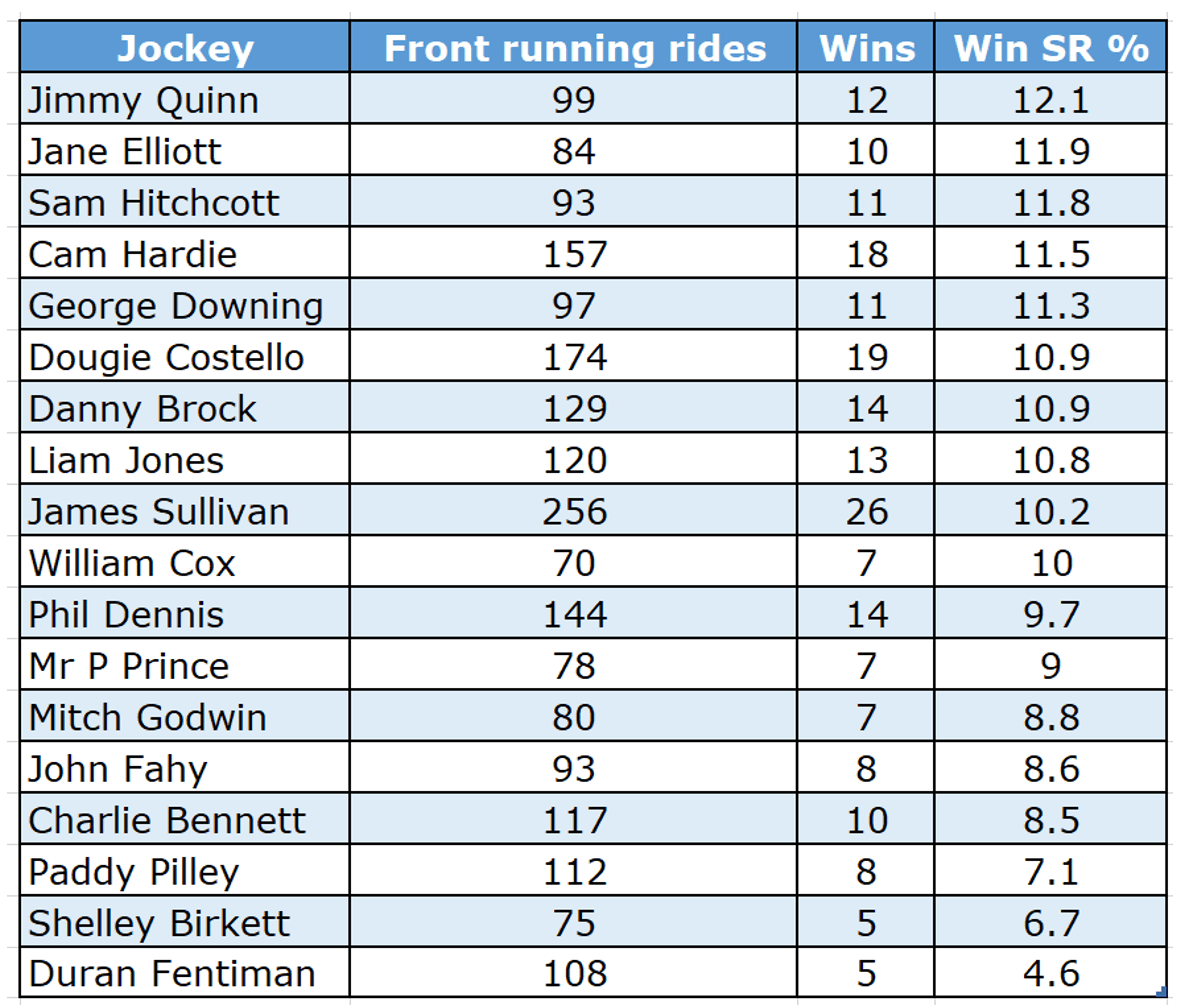 In order to give us a more complete picture I have produced jockey pace averages – in exactly the same way that I have created course pace averages in the past. I simply add up the Geegeez pace points for a particular jockey and divide it by the number of rides. The higher the average the more prominent the jockey tends to race. Here are the jockey pace averages (click the image to open in a new tab/window) : 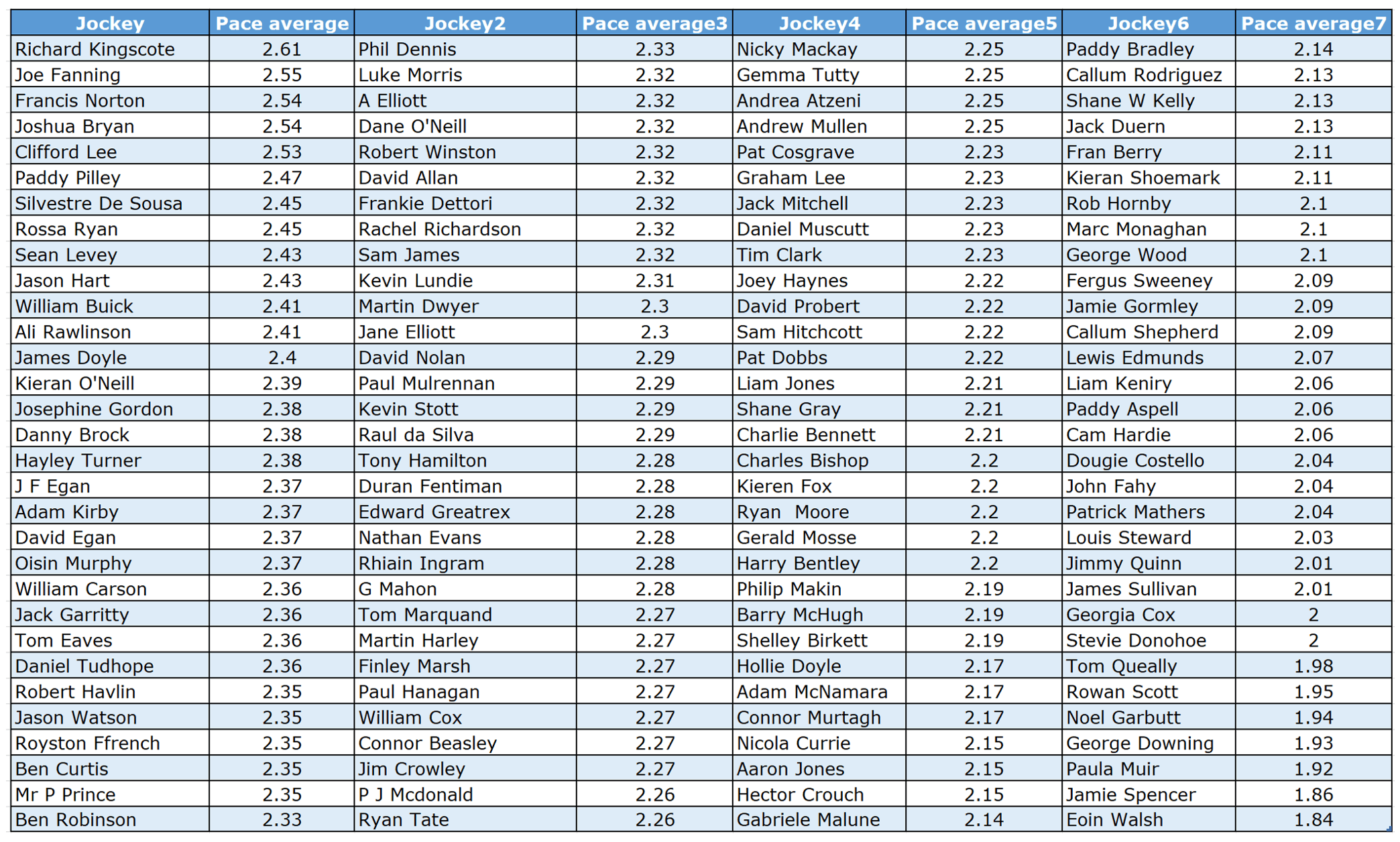 For comparison purposes, the average pace figure for jockeys stands at 2.25.

Note the correlation between the highest averages here and the percentage of front running rides data shared earlier. Kingscote, Fanning and Norton are in the top three of both groups.

Many readers will also not be surprised to see Jamie Spencer at the bottom – he is a jockey renowned for holding his mounts up and his 1.86 average illustrates this perfectly.

How one uses the information in this article to aid their personal betting is of course down to the individual, but for me, someone who is often looking to predict the front runner in a race, this jockey pace data is very useful. Previous articles have noted that huge profits would be made at certain distances if you could consistently predict the horse that is going to take the early lead and front run. Hence, I have added these jockey data to other factors such as the recent pace profile of each horse, a longer-term horse pace profile as well, the draw and the trainer. It is all about building up the best pace profile of a race that you can.