I’ve been meaning to check this out for ages, writes Jon Shenton. With a bit of downtime over the Christmas and New Year period (if you can have downtime with three kids) I finally got around to pulling my thoughts together to test a few theories with some lovely data.

I’ve always been curious about whether there are some trainers where we can get a better view of a horse’s likely performance based on its form in recent runs.

In fact, I have touched on it in some of my earlier pieces on this site. Using data such as the LTO Winner element of the Trainer Snippets report here on geegeez.co.uk we know that some yards are more adept at backing up a win with another victory. In this article, then, I will broaden the search a little to placed form, rather than evaluating last time out winners only.

Let’s get straight into having a look at a few numbers.

The data below shows all National Hunt Handicap runs at 20/1 or less since 1st Jan 2012 (up to 11th Jan 2019) split by whether the horse placed last time out (LTO). I’ve selected handicaps only largely to avoid the inconsistencies associated with horses on their first few runs. There may be an argument to expand this, but one has to start somewhere.

The key here is that A/E and ROI are virtually the same across both datasets. From a punting perspective you’d lose just short of 15% of your cash backing all horses that placed LTO, and a similar level of damage would be inflicted if you only backed horses that did not trouble the judge during their last venture.

The main difference is strike rate, a horse “in form” based on last run prevails 16.66% of the time as opposed to 11.44% if it was off the board that last day.

Broadly speaking, a winner that placed last time out returns a starting price of about 4/1 on average.  One that didn’t place the last day has an SP of 13/2 or thereabouts.  Considering both aspects perform consistently in A/E and ROI terms the market appears to be getting it right.

Let us now drill down somewhat, by yard, in search of trainers worth tracking in specific circumstances.

To do that I’ve pulled together a fairly large master data table showing performance with horses that placed last time, and data showing where the horse hasn’t hit the frame in their last race, and merged it together by trainer to try paint a picture. Still with me? Good!

To make sense of it all I’ve categorised things into three areas of interest and will discuss each in turn.  The categories are as follows:

In this article, I'll review the first two categories, starting with...

The first theme or thread represents general outperformers, which is to say handicap excellence all round.

Just to explain the tables and data in more detail first.  The “block” to the left shows the trainer performance for horses that placed last time out in terms of runs, wins, actual vs, expected and return on investment.  The “block” on the right shows the performance of all runners that failed to make the frame in their last appearance.

The column on the far right (A/E var PL – NP) shows the difference in A/E performance between horses placed and unplaced last time out.

This should be an elite list, and for that reason it’s small in size. These yards have an A/E of 1.00 or greater irrespective of horses placing or not last time, with a positive ROI across the board to boot. To qualify they needed to have saddled a minimum of 50 runners for each aspect at an SP of 20/1 or less.

If we take the Kenneth Slack yard, horses which placed last time won 23 of their next starts from 86 runs. That was right on expectation against the market (A/E 1.01) whilst recording a small profit of about 7%.

A Slack runner based on these numbers is always worth a second glance.  However, it seems as though the horses’ last race performances may be irrelevant to how well they’re likely to run this time. The win strike rates are very similar, too (c.25-26%), but because the market seems to be factoring in the last run form there is more value in backing the runners who did not place on their last outing.

All of the above five trainers are Outperformers, consistently beating the market irrespective of whether their horses’ previous run indicates they’re in form – as evidenced by a placing – or not. At the top of the tree is Tom Lacey, though the market is now catching up with his progressive stable. As things stand backing all Lacey’s runners blind is a still a rewarding enterprise… just! The bird, however, may have flown.

Interestingly, and perhaps surprisingly, Nicky Richards is outperforming expectation across nearly 800 runners. That merits further investigation another time but, for now, following this yard closely is the recommendation.

Just by way of a quick refresh, a Roller is a trainer who performs strongly where their horses hit the frame in their most recent start, in comparison to the ones that were unplaced.

The table below shows trainers with 50 or more runners in each category (placed or not last time out). Data is sorted in order of the variance in A/E performance between the placed and not placed LTO (the far right column).

Some of these variances are mighty in scale. 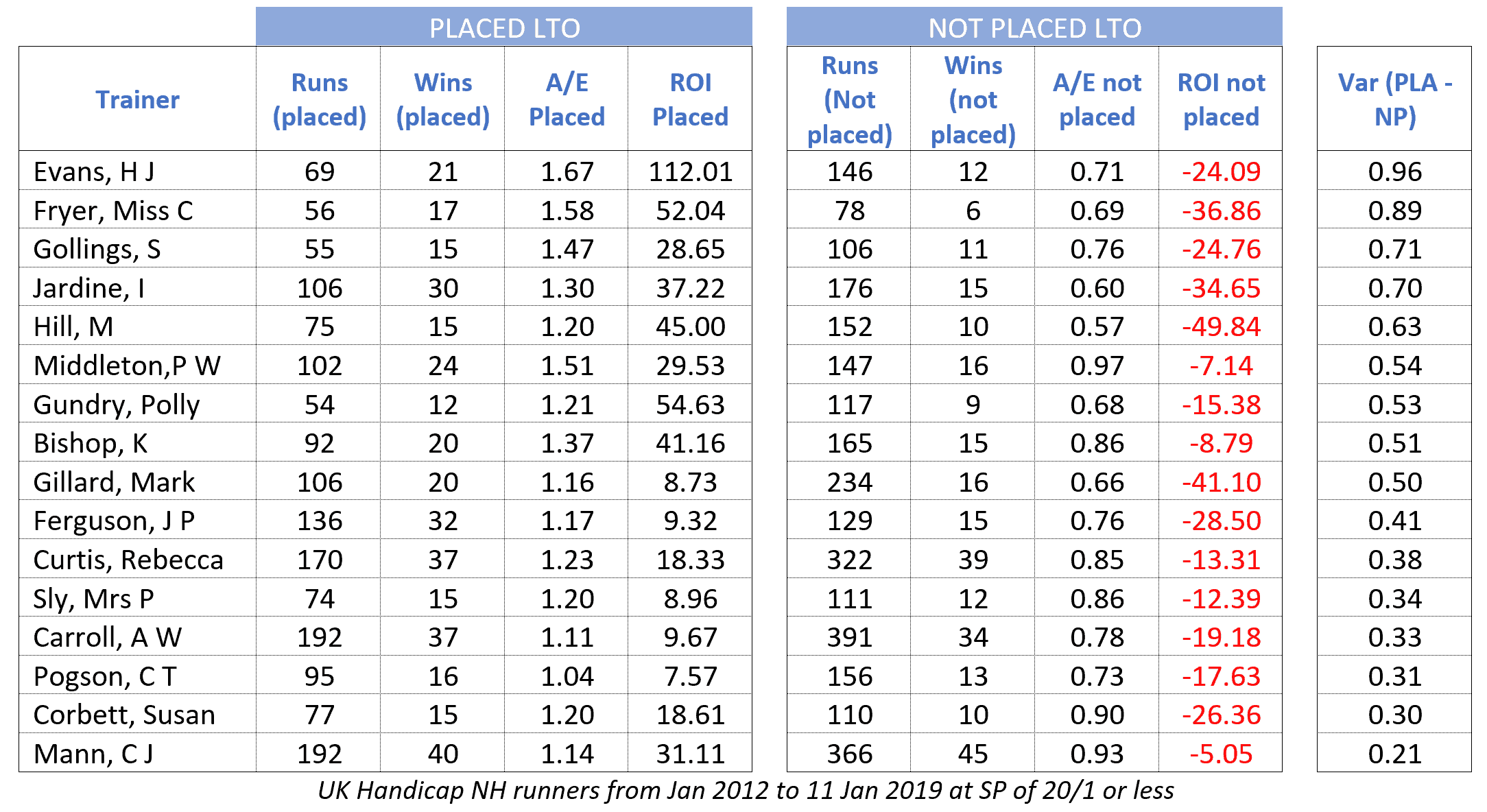 For those that are more visually stimulated, the graph below shows the same data as the table in terms of A/E performance by trainer. The blue blocks represent horses placed last time, the orange line representing those that did not. It shows the range of difference in performance by trainer, the size of variance getting smaller as we work left to right across the graph. 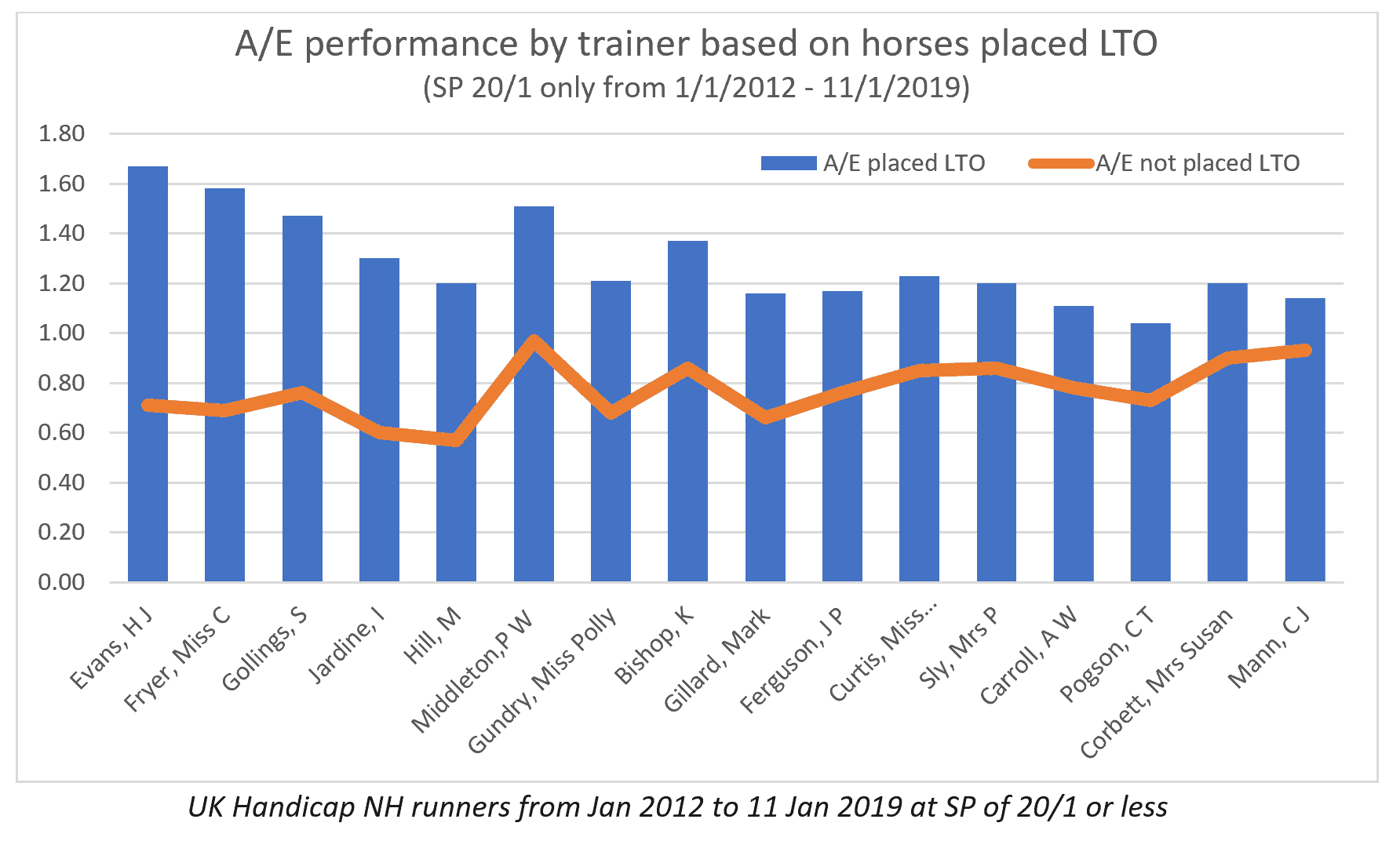 Right at the top we have James Evans (H J Evans http://www.hjamesevans.co.uk), a relatively modest (in terms of size) operation based 20 or so miles away from Cheltenham.

Compare this to those unplaced in their previous outing:

That’s a stark difference potentially illustrating that this yard takes its time to get horses ready but, once firing, they look worthy of support.

Drilling a little deeper, the James Evans yard in its entirety has only ever had one winner at greater than 14/1 (UK NH racing) so we can refine slightly.

I’m happy to leave it there, this angle has been profitable every year apart from one so that will go into my systems to follow library from now on, a simple angle:

Another trainer with a stark difference in performance based on last time out placing is Caroline Fryer (17/56 placed LTO 28% SR vs 6/78, 8% SR not placed LTO http://www.carolinefryerracing.co.uk). Hers is another team with a select number of horses running under rules. On closer inspection there is a slightly different story to tell here, however.

Of those 17 wins from last time placers, ten relate to a single horse, Riddlestown. Now a 12-year-old his last run was on Boxing Day. It may be that age is catching up with him but he’s still going into my geegeez tracker. When he’s had a competitive run (placed) in the recent past (30 days or sooner) he is 10/31 so I’ll be keeping an eye out for an uptick in performance. Riddlestown has an entry at Leicester on 22nd January, so I will be watching closely for signs of improvement with a view to potentially following him next time.

Every trainer on that list above merits further analysis, especially those who fly under the radar of the general masses (which I think is the case for most of them).

A yard I’ve followed with some success in the past is that of Iain Jardine (http://iainjardineracing.com), though admittedly more on the flat where Jardine has a strong record in staying races. That is particularly true where his horses are fit (had a recent run) and have been backed (10/1 or less). So it’s not a huge surprise to see him on this list with his NH runners.

Taking his ‘placed in previous run’ data for National Hunt (30/106) and refining I’d expect a similar pattern to his flat runners to be apparent: a recent run and relatively well supported in the market.

I’m not going to show the data table (you’ll have to trust me!) but there isn’t a winner in his dataset sent off at greater than 10/1, albeit only from 13 runs.  A similar pattern to the flat runners so I’m going to ignore those for now, though I am mindful of the small sample size.

The table below shows the 10/1 or shorter NH placed LTO runners by days since last run. 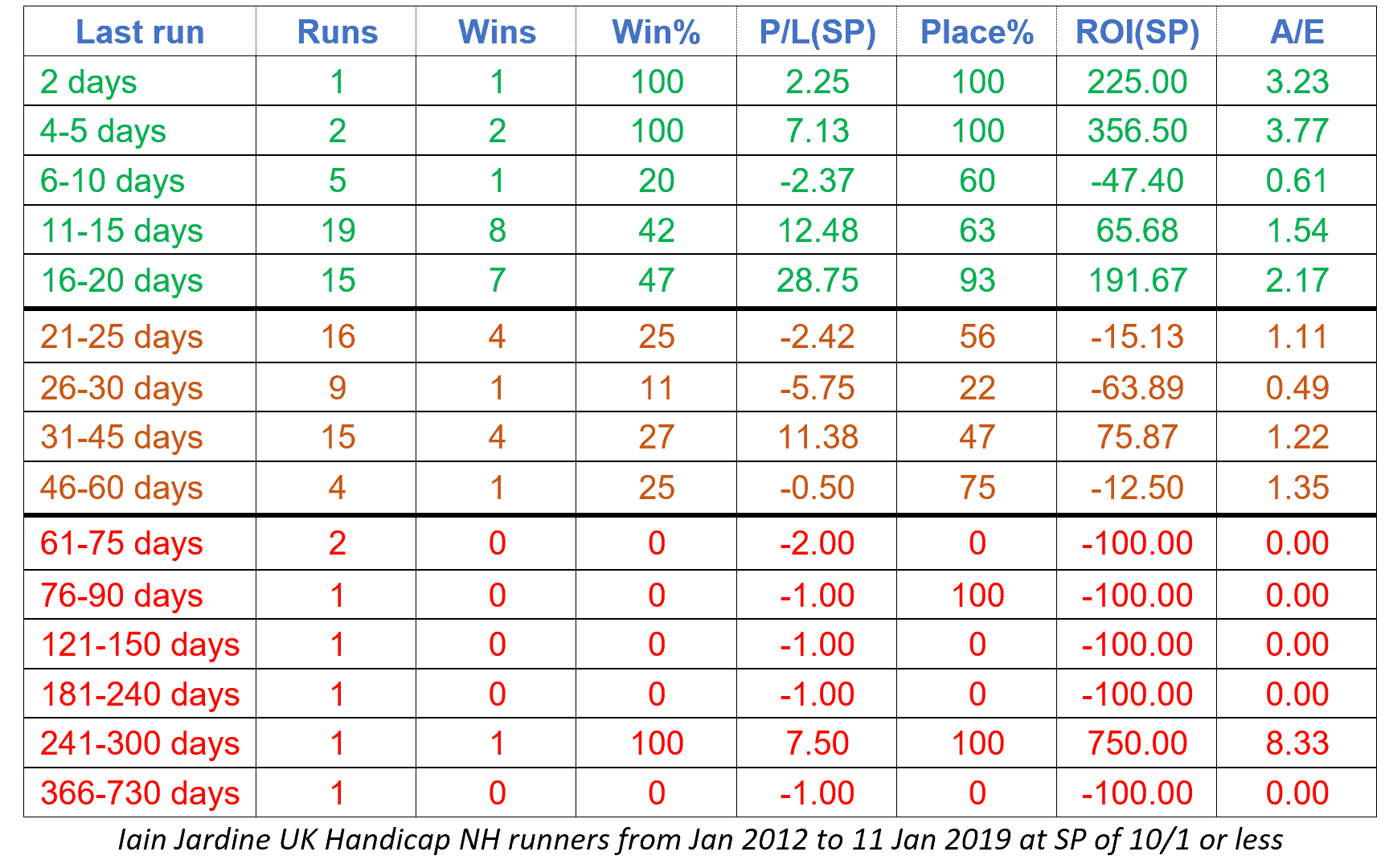 I’ve used coloured font illustrate some of the subjectivities when dealing with data.

The Green section is easy, it clearly shows that if a Jardine horse sent off at 10/1 or shorter was placed in a very recent run (20 days or less) it is worth following.

The other sections are less clear, the red font illustrates those horses that have been off track for more than 60 days: one winner from only 7 runners sent off at 10/1 or shorter, so inconsequential. Personally, considering the overall profile of the data I’m happy to leave a short-priced Jardine placed last time out runner alone if it’s not been since within a two-month period.

As you may have speculated already the amber section is most open to interpretation, with ten wins from 44 runners and a very small SP profit to a level stake. I think in this case I’d probably leave alone, primarily to limit the number of bets and to keep a more focussed portfolio. However, with exchanges and BOG it may be that backing these ‘three weeks to two months off’ runners will turn a healthy position.

Iain Jardine NH Handicap runners with an SP of 10/1 or less that have run in the last 20 days, placed LTO

This article and the data referenced within is broad brush stuff. For example, in the high-level data there is no consideration of factors such as when the horse’s last run was, which grade, distance, class, etc. Form must be more relevant when those things are positively aligned with today’s task.

Next time I’ll look at the “Leftfielders”.  There is a raft of interesting stuff to discuss with these yards.  Word count and a determination on my part to try and be a bit more succinct means I can’t do it justice today! Until next time, happy punting.

The Importance of Pace in Three Mile Handicap Chases