The ideal holiday for a National Hunt enthusiast in the late 1930s had to be a fortnight on the English Riviera, writes Ian Sutherland. It was long before the birth of summer jump racing, and August marked the start of the new season. South Devon had no fewer than five racecourses within 20 miles of each other, with Newton Abbot, Exeter and Buckfastleigh all early starters. Totnes, at the southern end of what is now the South Devon heritage railway, raced the following month, whilst Torquay held its annual fixture at Easter.

Buckfastleigh was the perfect place to watch racing. The track was a little over a mile around. The stands were at the highest point on the circuit, giving a panoramic view over the whole course. Most races were over a distance of either 2m 154 yards or 3m 418 yards, meaning they started just before the stands. This was followed by a downhill plunge to one of the sharpest bends anywhere – more a corner than a bend – which could catch out even the most experienced jockey.

Chris Pitt, in his account of lost racecourses, A Long Time Gone, had the problem described to him by regular Buckfastleigh jockey, Bernard Wells. "It had one of the sharpest bends on any track. After passing the winning post, you'd go down a sharp hill which felt like riding down a coalmine and then there was an acute right angled bend at the bottom. You had to go wide and swing into the bend. If you tried to follow the rails around you'd finish up outside the course on the A38, as happened to me once on French Knot. The first time I rode her was at Buckfastleigh when she jumped a wire fence and landed on the main Exeter to Plymouth road."

That was bad enough back in his day, but imagine it now, when vehicles are thrashing down the dual carriageway at 70 mph! Actually, if you can slow down a bit towards Plymouth once you pass the turn off for Buckfastleigh, you can see the remains of the stand up on the hillside. And if you want a closer look, pop into Dean Court Farm Shop to ask. There's a track that runs from what was the entrance to the course alongside the finishing straight to the stand. 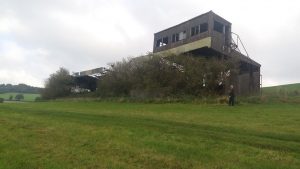 The remaining stand at Buckfastleigh racecourse

This stand proved to be a bit of a white elephant, as it was built in 1950, only ten years before the racecourse closed, after 77 years of operation. In its very early days Buckfastleigh held just that one meeting in August, but in 1886, after just three years, a Whitsun meeting was added. This proved popular, and as the advertising poster of the time (kindly shown to me by Richard Cooper, whose family owns the racecourse site) shows, by 1901 special excursion trains were running to the local station from Exeter, Newton Abbot, Torquay, Plymouth and Kingsbridge.

It's no great surprise that a permanent stand was soon put up for spectators, though in fact, it proved to be anything but permanent. The wooden structure was dismantled in 1927 and sold to Torquay United FC, where it was ready for supporters’ days before their first ever fixture in Division Three South of the Football League. There it remained in regular operation until just five years ago. Why the racecourse sold it is a mystery. There's no indication that they needed the £150 Torquay paid; indeed, the regular good attendances argue that there was a continuing need for it. Instead, for twenty-odd years, temporary wooden stands were brought in for each meeting and then taken away and stored until the next one. 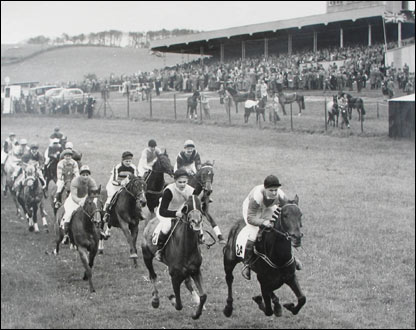 Racing at Buckfastleigh in 1955

There was no shortage of runners either. This photo, taken in 1955, shows a field of 13 passing the stands, and racecards of the time indicate there were regularly 12-18 horses competing. The stables on the course itself have been demolished, but a similar block still stands at Dean Court Farm at the bottom of the course. Between them they could house close on 100 horses, though they held little attraction for local trainer/jockey of the 1920s, Bert Gordon. He always walked his runners the four miles over the hills from South Brent.

The final day's racing, on 27 August 1960, drew in more than 4,000 spectators. Bernard Wells and French Knot successfully negotiated the sharp bend and, although they could only finish third in the handicap hurdle, the jockey did ride a winner on the day. The Whitsun meeting a few months earlier had seen a first training success for 21-year-old David Gandolfo, when Sunwood took the South Devon Selling Handicap Hurdle. How many of the 1500 winners "Gandy" had during his fifty year training career would have come at Buckfastleigh had it survived? And who would think that one of the ways the course would maintain a link into the future would be by the naming of a home on the housing development that now occupies the site of the trainer's old yard after his first winner?

By this time, Lord Churston, the landowner who had leased Dean Court Farm for three hundred years, had decided to sell off that part of his estate. Only after the land had been auctioned off, for what was felt to be an inflated figure of £150,000, did it become clear that the sale marked the end of racing at Buckfastleigh. Richard Cooper explained, "The investment company that bought the land also purchased the buildings, hurdles and other equipment. They clearly wanted to continue racing there. What they hadn't understood was that this did not include the licence to run fixtures under the rules of racing, and as the authorities were seeking to reduce the number of meetings, there was no chance of the licence being transferred separately”.

At the time, meetings were already in the calendar for 1961. These were moved to Exeter and Newton Abbot. Soon, the grandstand seats and turnstiles had also gone to Exeter, whilst the number board made its way to Newton Abbot.

Yet Buckfastleigh refuses to give up entirely. The Coopers, having bought Dean Court Farm in 1963, acquired the racecourse land some years later. The remains of the stand would likely fall down without the support of the trees, and it's taken a clever switch from running right to left handed for the two point to point meetings which take place each Spring. But the spirit of Buckfastleigh remains, and long may that continue.