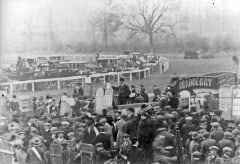 I wonder whether the Romans ever staged chariot racing during their occupation of Britain? If they did, one likely place would have been Moreton-in-Marsh, a significant mid point staging post on the Fosse Way linking Exeter and Lincoln. There was a Roman fort a mile or so outside the town, so it would have been possible. We'll never know of course, and we have to fast forward over fourteen hundred years before we come across any definite evidence of horse racing in this part of the Cotswolds.

What we do know is that by the 1840s an annual meeting was established on a circuit just south of the town, which continued for 70 odd years. As the tapes went up last Thursday at the start of the Aintree Festival, exactly 100 years previously the last meeting at Moreton was taking place. Though there's nothing of the course to see nowadays, it's easy to work out where it ran from the description in Stanley Harris's 1987 book Racing Memories of the North Cotswolds. The course “was on the left hand side (of Fosse Way, now the A429) between Dunstall Farm and Frogmore. But it is interesting to note that for the steeplechases which were over three miles, the runners had to cross the Fosse Way twice, on both sides of the bridge known as Stow Brook Bridge.” The photo above, courtesy of Moreton-in-Marsh local history group, looks south round the final bend.

It's a good thing that there weren't too many three mile chases. As I found out a couple of days ago when walking the route of the course, as soon as the horses crossed the road, they they left the racecourse and literally went out into the country, and out of sight for spectators, even once temporary stands were erected in the early 1900s. At the last meeting, exactly 100 years (and a week) ago, there was just one such race, the other five taking place over a distance of two miles, on a proper racecourse that lay entirely east of the road, and where people were able to see the whole race. The Evenlode still takes some jumping

You might think that on land that has been farmed for a century there would be no trace of a racecourse, and in tangible things such as buildings and jumps that's absolutely so. But Moreton-in-Marsh used natural features extensively, and there are many field boundaries you can follow that marked out the edge of the track. In some places, gaps in the hedges have not been filled in, which suggests that they too were on the racetrack.

The owners of Frogmore Farm told me that they often find people coming along with metal detectors, hoping that the plough has turned up some Victorian or Edwardian coins, especially in the field next to the brook, which is still known locally as Racecourse Meadow. The farm played another, vital function at the meeting: it provided the only ladies' toilet facilities.

Racing at Moreton-in-Marsh seems to have been a genuinely local activity. There are no indications in the scarce records that survive of famous jockeys or high profile trainers turning up, despite easy access from the railway, and at least three sizeable coaching inns offering stabling. Even the most notable horse to run there, Hedgehog, who went on to win one of the first Welsh Grand Nationals in 1898, was trained only a few miles away.

The motor car really spelled the end of racing at Moreton. True, the traffic is stopped to this day at both Brighton and Ludlow while the horses race across the roads there, but the long straight run of Fosse Way proved a different matter from B class roads. Perhaps things would have turned out differently if the tourist signs in Japanese that now adorn the railway station had been put up 100 years ago. After all, racing's a popular sport in Japan.