The whole point of betting on horses - betting on anything - is being able to accurately predict what will happen in the future. The more 'yesterday' information we have, the better able we are to forecast 'tomorrow'.

In Britain, horse racing punters were traditionally in the dark: for years, there was nothing more informative (ahem) than the little alphanumeric sextet of recent finishing positions to the left of a horse's name. 'Professionals' bought the Sporting Life and, more recently, Racing Post. This gave them a huge leg up on other newspaper readers, but was still seriously deficient in terms of projecting what might actually happen in a race.

The advent of the internet has, slowly it must be said, changed things; finally, punters are able to access a raft of insightful data which genuinely can give them the edge over the bookmakers. This edge is greatest in the early markets, where many of the horse race odds lines are algorithmically constructed: Deep Blue versus Kasparov this is not. The software creating the early markets is not exactly sophisticated, which means we don't need to be chess grandmasters to find the ricks.

Looking at past form cycles and profiles - that is, when a horse comes into form and under what conditions - is a blind spot in the algos, which focus too heavily on recent form. The starting price markets are much more efficient of course, but nobody bets SP, do they? Do they?!!

One of the last major vestiges of unpublished form, in Britain and Ireland at least, is pace. Pace can mean different things: it can be precise, by virtue of sectional times; or it can be more general, defining a horse's run style. In most of the established racing betting nations - Hong Kong, Japan, US - sectional times are ubiquitous. Commentators are able to quantify the speed of the horses in-running by a split time stopwatch in the corner of the screen.

Here, we have no such aides - the usual "who's going to pay for it?" arguments - but what we do have, and more so than in many of the aforementioned racing jurisdictions, are detailed in-running comments. These allow a bettor to work through past performances and develop a picture in the mind's eye of each horse's run style. It's laborious, for sure, and I know for a fact that most jockeys riding in Britain gather their understanding of how the races they're riding in will unfurl in this manner. Until now...

Geegeez Gold has had pace information, in the form of a data table, for quite some time. And, yesterday, we moved things up a notch by converting the numbers into a picture: a pace map. Pictures are much easier for us humans to understand than words and numbers. Consequently, we can get the gist of something - like, for example, how a race will be run - in just a second or two when the data is presented in pictorial format.

So, welcome to Geegeez Gold's new Pace Graphic view. It's not Deep Blue, and nor was it imagined by the genius of Kasparov (it was me, actually), but it does instantly visualise how a race might be run based on the last four UK/Ire runs of the horses in it. And that means its users have a significant edge on other punters, either in time or awareness terms or, in most cases, both.

It lives in the existing PACE tab, and looks like this: 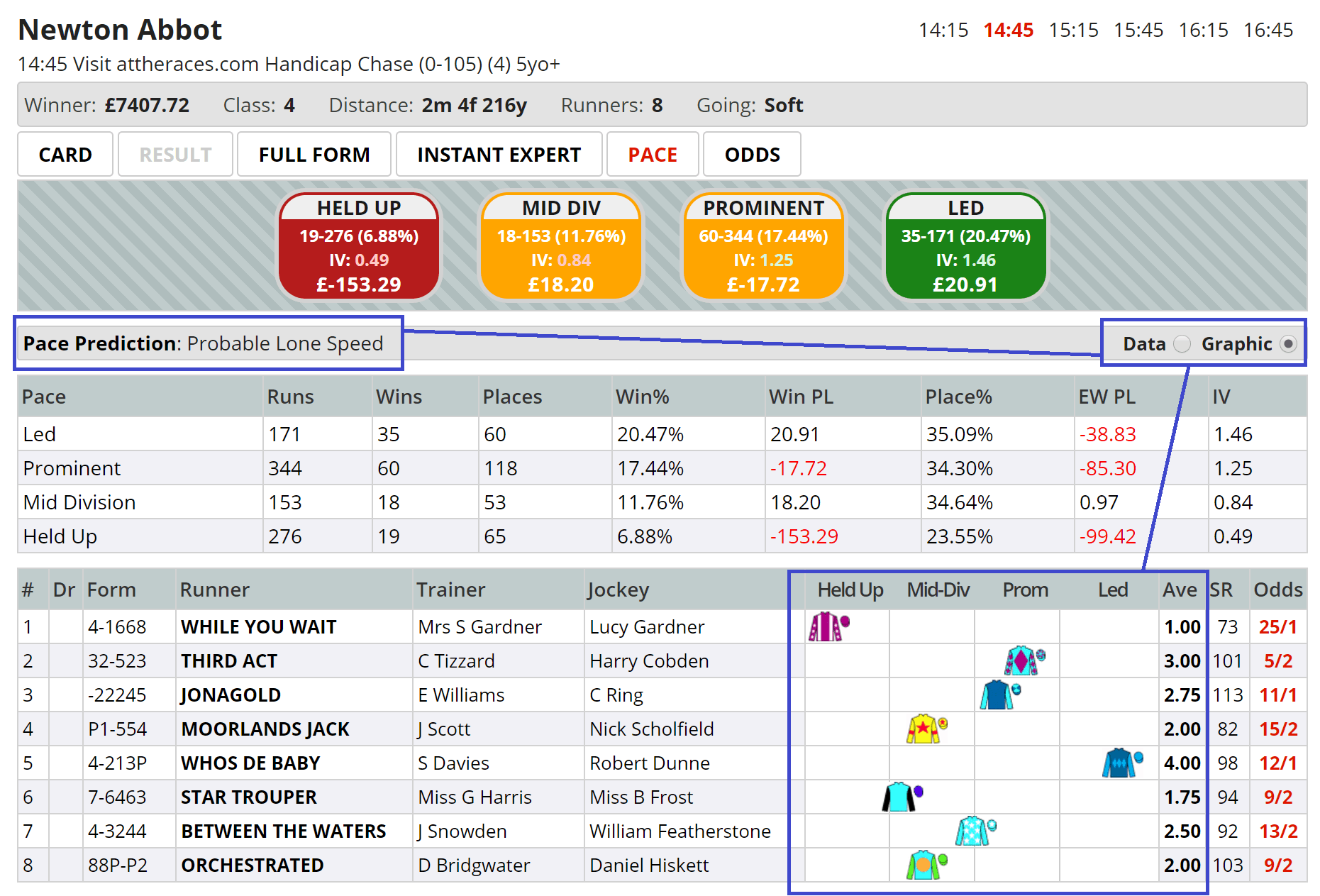 In this race, Whos De Baby looked like he'd get a clear lead. That's exactly what happened, allowing him to finish 2nd at 12/1

In this example from yesterday, Whos De Baby was predicted to be 'Probable Lone Speed', meaning he was expected to be able to set his own pace and try to make all. He very nearly did, finishing a good second at odds of 12/1.

Below is a video where I show you the what and how of the new Pace Graphic. If you're familiar with pace and how to use it in horseracing there may be little new therein. But if you're still trying to get to grips with the importance of pace, and which scenarios to look out for, you really should watch it.

There is more information in the User Guide, which can be downloaded from your My Geegeez page here; and there is an 'introduction to pace' video here.

Geegeez Gold continues to be committed to provided the best information for punters in the most consumable, readily understandable format, so you know more than your competition (other punters, not bookmakers) in less time.

If you're not yet a Gold subscriber, you can join us here. That page includes a link where readers who have never tried Gold before can get their first 30 days for just a pound. Thereafter, Gold is £30 per month. If you're serious about getting ahead with your horse racing betting, I don't know how else you can have this sort of a chance for less than a pound a day. Granted, I am a tiny bit biased... 😉

Good luck, and thanks for reading/watching.
Matt

An End To Blinkered Thinking?