When Poet’s Society delivered win number 4,194 for Mark Johnston in the Clipper Logistics Handicap to cement his position as winning most trainer in UK racing history, I read a number of tweets about the impossibility and frustration in predicting how his sizeable battalion of horses perform, writes Jon Shenton.

This rang true: having searched high and low in the past for potential Johnston angles I’ve found it hard to see the wood for the trees. Perhaps the sheer volume of runners essentially evens everything out?   Surely though there must be something in that vast amount of data worth discovering? Armed with a renewed vigour I put the kettle on, fired up a database (the excellent horseracebase) and got to work.

The first question to ask, and answer, is, “where do you start?”. To me there is a certain logic in evaluating the yard by age groups, so in flat racing terms it makes sense to run the rule over Johnston’s ample contingent of 2-year-old runners in the first instance.

The volume of horses travelling through this yard from a young age is phenomenal. By my calculations there are on average around a hundred new 2YO debutants from the stable per year.  Backing them systematically is a complete no go as that would result in a loss of 17% at SP, however if we look at distance as a differentiator, we start to get a different feel:

Immediately we can see that the 5-6.5f debutants more or less break even to SP with a reasonable return to Betfair SP.  In my experience this is usually a good starting point for further investigation and with BOG on the table there would be many worse ways to wager than backing these all blindly.  However, I very much doubt you’re reading this to more or less break even, so let’s see if there is a better indicator in the data to improve punting performance.

A key component to consider with trainers often is the gender of the horse, in fact Geegeez’s own Tony Keenan appraised Irish Trainers and their relative performance with fillies, here.

Assessing Johnston’s debutants by gender is very interesting, as the table below indicates:

In anyone’s book that’s quite a variance between colts and fillies (despite the 325% ROI I think with a sample size of two, we can ignore the geldings).  A debut MJ filly wins a quarter of the total runs and returns nearly 50% on SP, and that’s very much backing blind territory if you are that way inclined. Certainly such types are worthy of marking up when you’re betting in a race containing a Johnston debut juvenile filly.

Digging deeper, backing those fillies from May to August improves the picture, the runners early in the season generally underperforming, as do many fillies at that time of year.

Mark Johnston 2yo first time out fillies running May-August between 5f-6.5f in distance

The same underperformance applies to horses making their first strides in the autumn, which may be being geared up for 3YO handicaps the following season and potentially running to get a mark (more on those unexposed types later).

So, by backing Johnston first time out fillies over 5-6.5f from May to August a return on investment of 81% would have been achieved; just for clarity this covers both Maiden and Novice races.

Looking beyond the first-time out angle, considering novice races only (Johnston’s record in nursery handicaps is par at best so ignored for the purpose of this article) there is more of potential interest.

Since the expanded novice programme was introduced in 2016 to encourage more sightings of maiden race winners, it is worth a check to see if Johnston is making use of these races by evaluating the performance of his previous winning horses.  The table below shows those runners in novices that have got their noses in front in their fledgling two-year-old careers.

Considering the Classic generation, it was actually quite hard to find a robust angle but there is potentially something in evaluating unexposed horses in handicaps with very little in the way of solid form.  Taking all of Johnston’s 3yo runners in 3yo only handicaps we have the following:

That overarching dataset is miles away from a profitable or even remotely interesting angle; however, if we look for potential lurkers, horses that the market may overlook due to previous underwhelming performance there might just be a sliver of light to work with.

The top line is interesting. Horses that have no previous career wins running in a 3YO handicap for Johnston are marginally profitable if you back them all, and they have a respectable 17% strike rate too.  There are several ways to potentially sharpen from this starting point.  However, to stay with the unexposed theme, evaluating the horses’ total number of career runs might be considered a logical way to delve in a bit deeper; fewer runs should mean less predictable?

Mark Johnston 3YO handicap runners from January 2013 with no career wins, by number of career runs

Maybe fewer runs = more predictable!  No career wins, fewer than 6 career runs, 30% profit thank you very much.   Even if ploughing in on them all isn’t for you it’s a smart move to put an unexposed Johnston 3YO on your shortlist or at the very least be wary of them if you have another fancy in the race. This chart shows win strike rate, and ROI (SP/BSP) by number of previous starts for Mark Johnston maiden three-year-olds. 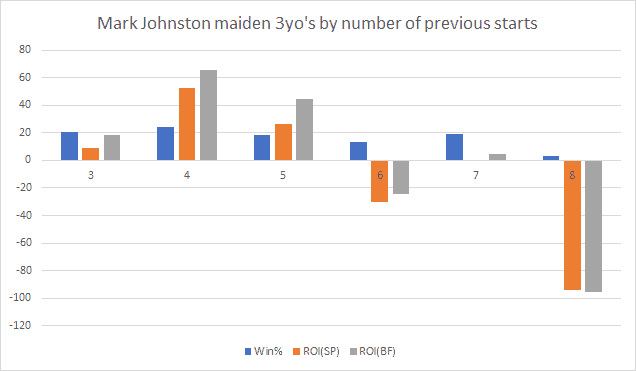 Those with more than eight career runs have a 4/50 win record and represent an incredibly poor way of investing.

In part two of this article, I look at older horses and a course where the 'Always Trying' bandwagon are particularly potent. You can read that here >

The Importance of Pace in 5f Handicaps: Part 5