With the Goodwood May festival upon us it seems as good a time as any to apply a little focus to the Sussex track, writes Jon Shenton. The hope is we'll discover a few snippets of info along the way to boost our chances of a profit at the course over the rest of the summer and beyond.

Racing has been an integral part of Goodwood history since 1802. The track is synonymous with the Glorious Goodwood festival with its three Group 1 races taking a prominent position in the racing calendar. There’s much more to racing at the course than that shiny centrepiece, however, and there are plenty of other meetings and notable races to enjoy throughout the flat season.

As usual, let’s start with the training performances at the track.

The table below shows the trainers who have high-quality records at Goodwood. The data within relate to runners with a maximum SP of 20/1, and are sorted by descending A/E and include all races from 2012 onwards. To qualify the yard must have had a minimum of 50 runners during the period.

For those of you who have been following these articles over the recent past, you may remember the Mark Johnston editions. I don’t want to trample over old ground but suffice to say Johnston handicappers who have had a recent run (last 25 days) are a serious proposition. Whilst this angle wasn’t as lucrative in 2018 as previous years the performance has been consistently impressive over time. Those are horses to keep on your side. A link to that article is here.

The other notable name to take from the trainer table is William Haggas. It’s the Impact Value of 2.52 which immediately draws the eye, especially on what is a healthy relative volume of runners. As you might expect with stats such as these there is a general all-round excellence contained within.  The only significant and justifiable enhancement I could establish is associated to the age restrictions of races.

The data show, amongst other things, that his record with 2yo's and in 4yo+ races is perfectly respectable. It isn’t, however, quite as sharp as the races containing horses aged 3. It’s low volume stuff though, with the place performance consistent across all  groupings indicating that I might be looking for something that is not there. As a result, I’m not convinced that there is an angle beyond keeping Haggas horses firmly in your cross-hairs at Goodwood.

Moving on, those yards which currently have less than desirable records at the track we get the following picture:

I was very surprised that Saeed bin Suroor is top (or bottom) of the pile with an A/E of just 0.52. Messrs Fahey, Varian, Hannon and Balding are all on the list too with Fahey’s runners returning a strike rate of a meagre 6.6%. Perhaps these yards are too proficient to stay on this cold list indefinitely and the cream will rise to the top in due course. Here and now, though, the numbers demand we proceed with caution.

To complete the trainer view, the table below contains the best trainers (in terms of A/E) for Goodwood during the month of May, perhaps offering a couple of clues for the next few days. Not that I’d advise anyone to back runners from these yards blindly but there are some impressive numbers in here, Roger Charlton most notably.  That said, there is a danger of the data reverting towards the mean based on such small volumes.

In terms of the pilots, the data below show all active riders with an A/E of greater than 1.00. William Buick probably has the stand-out record. Again, all round excellence means dedicated deeper focus angles are difficult to find.

The deadly duo of Norton and Fanning have a very close association to the Goodwood-friendly Johnston yard. Therefore, it would be reasonably logical to assume that their records could be attributable to the trainer connection. The intel below shows that whilst that is undoubtedly true, when they are jocked up on rides for other trainer, performance remains largely in line.

Whilst this may be of limited interest in isolation, I think it may lead towards a question of pace. In general, Fanning and Norton are considered to be enterprising riders at the front of a race. Perhaps they prosper at the track irrespective of who is employing them because of their propensity to effectively judge pace from the front? More on that shortly.

As the course map below illustrates, Goodwood has a complex array of starting points, routes and undulations.  The least confusing element is perhaps the confirmation on the map that there is a straight track for races up to 6 furlongs in distance.

Before searching for clues on how best to tackle the straight course, it must be noted that analysing the factors of pace and draw (like I’m going to here) in a broad way is a challenge. There are several variables that need due consideration, field size and ground conditions being the primary drivers of variance in determining how the race unfolds from a pace and draw perspective.

Fields here can range from 2 to 20-something, and underfoot conditions obviously can vary meaning that many multiple permutations can exist. All the same, there is merit in attempting to decode the data.

First let's look at the draw.

Using the draw analyser tool in Geegeez Gold the table below shows the performance of horses, by draw segment and based on the number of runners in the race, using Impact Value. I’ve only analysed races with six or more runners and I've used the actual drawn position (i.e. accounting for the effect of non-runners) rather than the race card drawn number.

The data covers all race ground from Firm through to Soft.  As noted in the above paragraph going conditions can have a significant impact on draw stats. However, in the case of Goodwood it’s fair to assert that the numbers on display are reasonably representative of the whole spectrum of ground challenges faced by the animals.

Here is a graphical representation of the very same data.

I include this as I think it illustrates a clear picture: horses that are drawn in lower or middle stalls are far more likely to prevail than horses drawn in high stall numbers on average. This applies to all nearly all field sizes (apart from arguably in 8-10 runner fields where the delta appears marginal) and to both 5- and 6-furlong distances.

The red line (representing those animals with a high draw) deteriorates the larger the field in general terms, especially if the race comprises of 11 or more participants.

The highest drawn are stationed on the stand side rail, nearest the cameras, the numbers thus progressively moving lower towards the centre and beyond to the far side. Racing usually develops between the middle and that stand side rail as a few horses generally tack across in that direction.

A rail is often an asset to have nearby but for this track it appears to be far from the case. Let’s complement this with a sprinkling of pace data using the Pace Analyser tool in Geegeez Gold.

The table below is based on the same conditions as the draw data above: 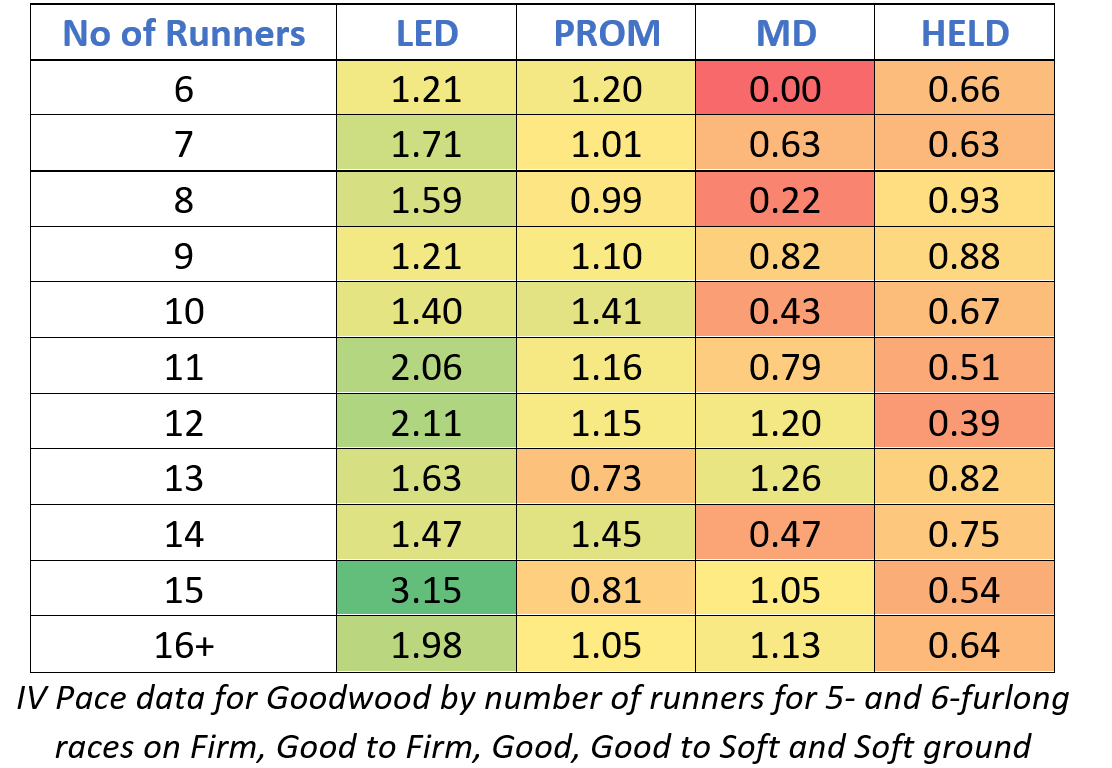 It is perhaps unsurprising that being on the speed early is an advantage over the sprint distances.

Putting both pace and draw together you’d expect a low/middle draw with a prominent or front running run style to be optimal. We can validate this by checking the draw/pace heat map (in Geegeez' Draw Analyser).

This picture covers  5- and 6-furlong races, on Firm through to Soft where there is a field size of 9 through to 12.

Interestingly, it appears as though a high draw is acceptable if the horse can zip out of the gates and secure an early lead. It could be claimed, using this data, that pace is of more importance than draw. High drawn horses who get to the front are 1.43 times more likely to win than the average in spite of the ostensibly challenging stall position.

That makes sense: racing room can be at a premium at Goodwood and it’s very feasible that horses get boxed in, especially in a big field. Those high drawn animals can have nowhere to go if horses congregate and the race develops on or around that rail or side of the track. The jockeys starting their journey from the low and middle numbered stalls should have more options to avoid trouble in running; unless of course the field sizes are so large that the low numbered stalls are situated on the far side rail as in, for example, the Stewards' Cup.

A heat map taking account of field sizes of 14 or more confirms the thinking:

In large fields even prominent racers struggle to get the run of the race from a high stall position, probably due to the relative lack of options in running. Horses drawn low retain a degree of flexibility in how they approach the race and can win from off the pace. Now all that remains is to find the right horse that this might apply to on race day!

Round course and longer distances

The 7-furlong trip has just shy of a quarter of a mile from the stalls to a tight right-hand bend into the straight. Most races develop on the far rail, the opposite to the straight track races. 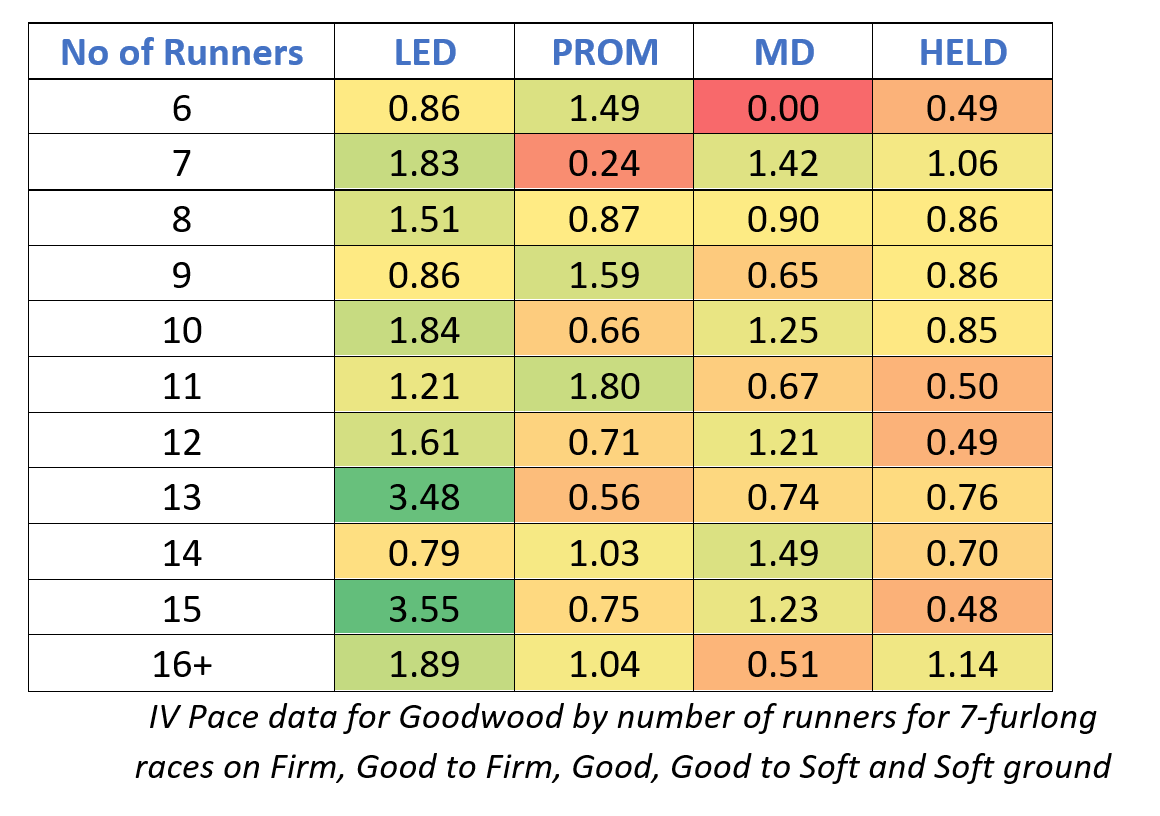 Again, early speed holds sway. Attaining good track position at the bend is clearly of primary importance. Evaluating the draw for the trip over seven using the graphical format (below) shows the significance of stall position. 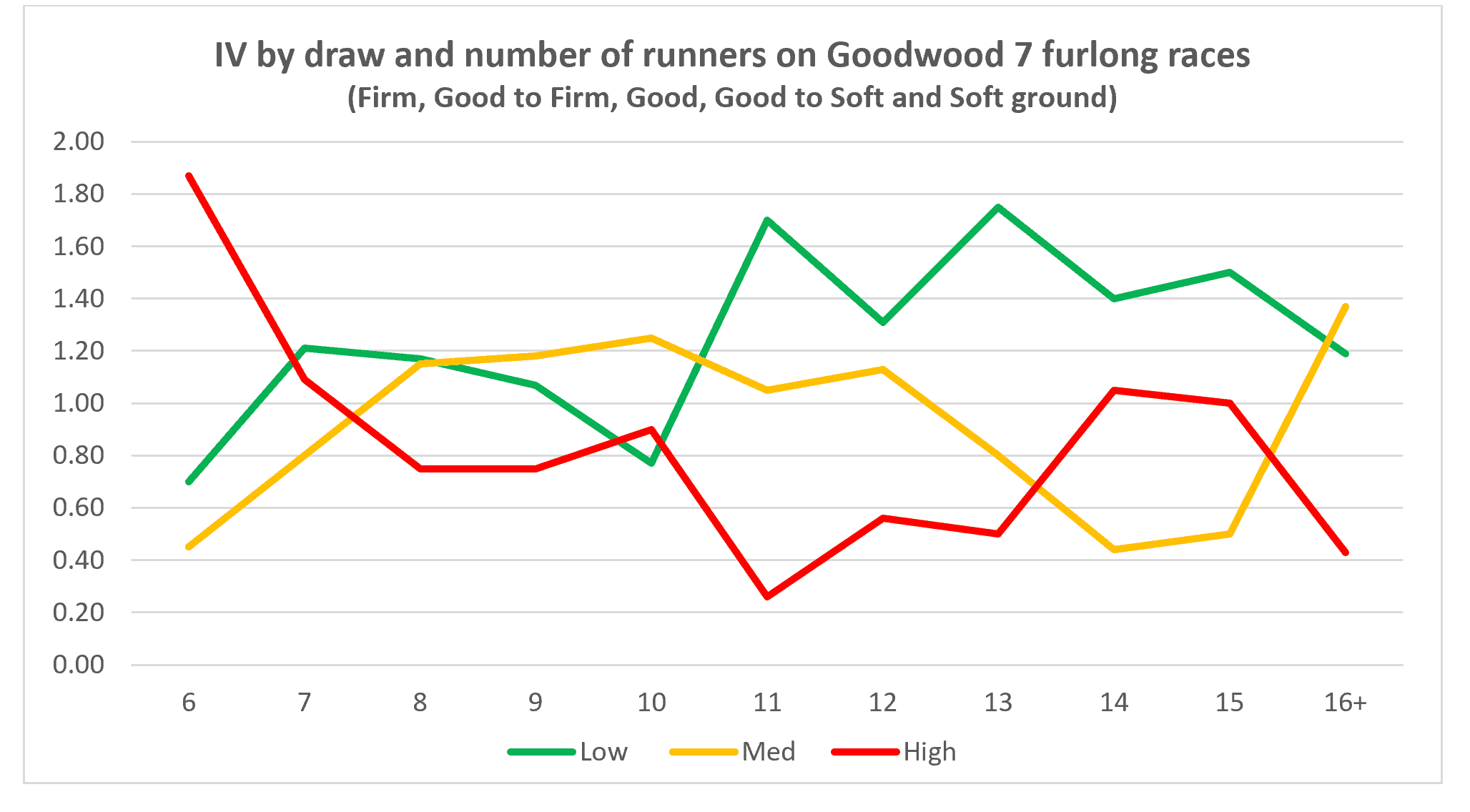 Whilst it’s reasonable to say that low draws generally have an advantage it only appears to become a concerted one in double digit field sizes. In these larger fields low drawn speed merchants around the bend are very much of primary interest!

In smaller fields pace is still an advantage but, naturally enough, draw appears to be less relevant. Like the straight course, high draws are perfectly fine if you think your horse can get to the front early and control the fractions. In basic terms, if you can pick the leader early in the race consistently over seven furlongs at Goodwood you will have a strong hand to play over time. The same principles apply over the mile too.

Distances greater than a mile

The races between nine furlongs and two miles are represented from a pace angle in the data presented below. There is perhaps a marginal preference for front running speed in general apart from the shorter relative distances (9 & 10f) where early speed is a significant advantage.

It’s repeating the same message: the major takeaway from the data is the reinforced view that it is  difficult for hold up horses to win in larger fields.  That makes perfect sense given the tight and undulating nature of a track where hard luck stories seem commonplace. Let’s hope that you’re not on  one that falls out of the stalls!

That’s it for another edition, I hope you find things of interest in the above and I’ll certainly be watching Goodwood races with a keener eye than usual over the next few days and months. Good luck!