I was toying with a couple of subjects on which to base the content of this article, writes Jon Shenton, when I read a highly enjoyable edition of David Probert’s thoughts on this very site, which you can find here.

My eye was drawn to the section on Windsor.  It’s a course that historically I’ve had a patchy record when betting, so, inspired by Mr Probert’s words, I elected to dive into the deep Windsor / Thames waters to try and find some data driven treasure.

The course is a staple of the flat season: with its regular Monday slot in the calendar it forms an important part of the campaign due to the high volume of meetings and central location for many trainers. For the army of 9-to-5'ers like myself it also offers a chance to kick back and watch some racing due to the usual evening nature of the meet.

The fate of the favourites

Whilst researching, the first factor that made me sit up and take notice was the performance of the jollies. Using geegeez Query Tool (odds SP rank = 1, races from 2012 season onwards) the below table shows the tracks with the best performance by favourites ranked by A/E.

The numbers are certainly of interest regarding the Berkshire course. Surprisingly, backing the horse (or horses if joint favourites) at the top of the market in every single race during the last seven years would have returned a 4% profit, with close to a 37% strike rate.

It’s one thing understanding that favourites generally do well but why is that the case? Sadly, I have no answer, only several hypotheses. The evening nature of the meeting gives punters longer to study? The clientele who frequent the meeting are casual punters who back proportionately more outsiders, therefore boosting the value at the shorter end of the market? The “vibes” behind the fancied runners are stronger at the track? Or maybe the nature of the track plays to form more than others. It’s difficult to pinpoint specifics; the volume of data does make it hard to ignore however.

Before delving into further detail (and as a bit of public service) here is the view of UK tracks which have the worst performing jollies over the same time period.

Earlier I raised a potential hypothesis in relation to the time of the meeting being a factor, more study time effectively meaning the market becomes more efficient. It doesn’t feel like it could be a credible factor? Well, data talk! If we take our info and analyse it by meeting time, there is perhaps a surprising outcome (using horseracebase for this aspect).

Favourites prevail 4.5% more often at evening meetings than at afternoon fixtures! An 8.3% ROI has been attained during the later meetings, opposed to small loss during the earlier timeslots.

In truth, I’m not sure what to do with this intel, and it could obviously be mere happenstance, but thought it to be a worthwhile detour and if you have any theories please do share them in the comments. I did check other courses with a significant number of night meetings and the difference was certainly less noticeable than for this track. Perhaps this is evidence of potentially reading too much into data with no sound reason behind it.

Parking the time of day theme, for now at least, and getting back to evaluating the market leaders in Windsor races, I next assessed the age of the protagonists. This starts to paint a picture of where additional focus may be a rewarding exercise.

The younger end of the age spectrum appears to be the area to concentrate on; it’s certainly where there is a greater demonstrable value. Again, we’re into conjecture about why that may be the case but, equally, the data are clear and compelling.

Starting with the 2YO group first, a logical extension would be to analyse the data based on the experience of the horse through checking the number of previous runs.

According to the info a first time out horse which is sent off favourite is worth taking on, generally speaking. The numbers are undoubtedly inferior to the animals that have at least a modicum of racecourse experience. Removing the debut runners, we’re left with 120 wins from 223 runs, A/E of 1.22 and a return of 24.4% on funds invested.

The table above shows the consistent out-turn of this angle. It’s not my usual hunting ground but I have to say I’m extremely interested in seeing how this one pans out over the glorious British Summer.

Suggestion: back all 2YO favourites at Windsor if they have had previous racecourse experience

Before moving on, there is one potential fly in the ointment. Knowing which horse will be at the head of the market at post time is not an exact science. Realistically, having to take the rough with the smooth (unless you have the luxury to back at the last possible moment) will be the nature of an angle such as this. In other words, there will inevitably be a few winners missed. However, particularly with BOG, there will be plenty of returns at prices better than SP, or at least you’d hope so. Swings and roundabouts.

Moving on to the 3YO Classic generation, there is a clear distinction between handicap and non-handicap races.

That’s a stellar win rate for the non-handicaps at around 44%. However, market expectations are higher leading to an A/E performance of just 1.02 and there is only a single point of SP profit from the 206 runners. As a result, it’s a tough gig attempting to find value there, albeit winners will be plentiful. The market appears to be exceptionally efficient.

However, the handicaps offer a degree of hope, an A/E of 1.09 and 14% return are reasonable if sustainable.

It seems highly plausible that an unexposed 3YO favourite against potential older rivals in a 3YO+ race may perform better than a favourite running against the same unexposed rivals in a 3YO only race. Therefore, a check on the performance by age restriction of the race would make sense.

Sure enough, the numbers support this theory. Again, a potentially reasonable angle with a high strike rate and, in the context of betting on horses, relatively low risk. I’m less sure about the 3YO only races but it’s a matter of personal taste.

Suggestion: back 3YO favourites at Windsor in 3YO+ Handicap races

Departing from the favourite theme there are several stables that seem to be synonymous with strong Windsor form.

The data above show the top eight yards using runners with a maximum SP of 20/1. The A/E is ahead of the market for all of them at greater than 1.  Having said that, and frankly speaking, the only two that really appeal in terms of further analysis are Ed Walker and Roger Varian. The IV’s (Impact Value, a measure of how much more often than the group - trainers at Windsor, in this case - perform as a whole, where a figure greater than 1 is better than standard) for both are very strong. The rest of the cast are probably worth another check at some stage but time (and word count) precludes such deliberations today.

Firstly, there is something rather remarkable regarding Ed Walker’s runners:

That’s a striking difference in performance based on SP. Not a single winner at 13/2 or greater from 43 darts thrown.

To check if this is happenstance or a general trait of the stable it’s best to compare the performance by SP for all runners (not just Windsor) for the yard. Evaluating all runs from Walker;

These numbers indicate that the Ed Walker stable tends to know what chance its runners have, and should be noted for the “don’t back without support” list.

Thus, in general a supported runner representing Ed Walker at Windsor is a serious proposition (this article and data does not include the most recent winner from the yard on Monday 29th April, He’s Amazing at 5/1).

Suggestion: back Ed Walker horses running at Windsor with an SP of 6/1 or less

Secondly, Roger Varian is clearly an elite trainer whose horses often appear to be in the winner's enclosure on a hazy summer evening. His performance is solid all-round, arguably aside from his 2YO’s who seem a little under-powered at 2/14.  Taking those out of the equation we again have a similar story to Walker in terms of supported animals delivering much better performance than the relatively neglected entrants.

Suggestion: back Roger Varian horses aged 3 or greater running at Windsor with an SP of 6/1 or less

There is a cautionary note however in the case of Varian: 2018 returned one victor from nine attempts, a much lower number of winners and runners than previous years. It may be that Roger V has targeted other races/courses in recent times so monitoring of the situation will be required.

Reading though Mr Probert’s blog it certainly helps pinpoint the value of having the right pilot on board. I have very few jockey angles, my primary belief being that factors such as horse and trainer ability (or patterns) have much more weight in assessing the likely outcome of a race. However, perhaps there is untapped potential to consider here.

The table below shows a Famous Five using the same criteria (races from 2012 at 20/1 SP or less), again sorted by A/E.

The top two, Harry Bentley and Andrea Atzeni, stand head and shoulders apart, the IV’s are impressive but so are all the other numbers. Atzeni is allied to the Varian operation which accounts for 16 of his 44 wins (51 runs, IV 3.22).

Finding variables to sharpen the focus is difficult though given that so many of the inputs to a horse's performance are non-jockey related. You could argue that a pilot’s performance could vary depending on ground, race distance, pace, and/or number of runners, but Atzeni is strong across all factors. There is no real angle beyond taking an Atzeni-ridden runner very seriously.

With regards to Harry Bentley, it’s more straightforward to find opportunities. The below graph offers interesting insight, namely that races over shorter distances are less productive, at least in terms of A/E and IV. 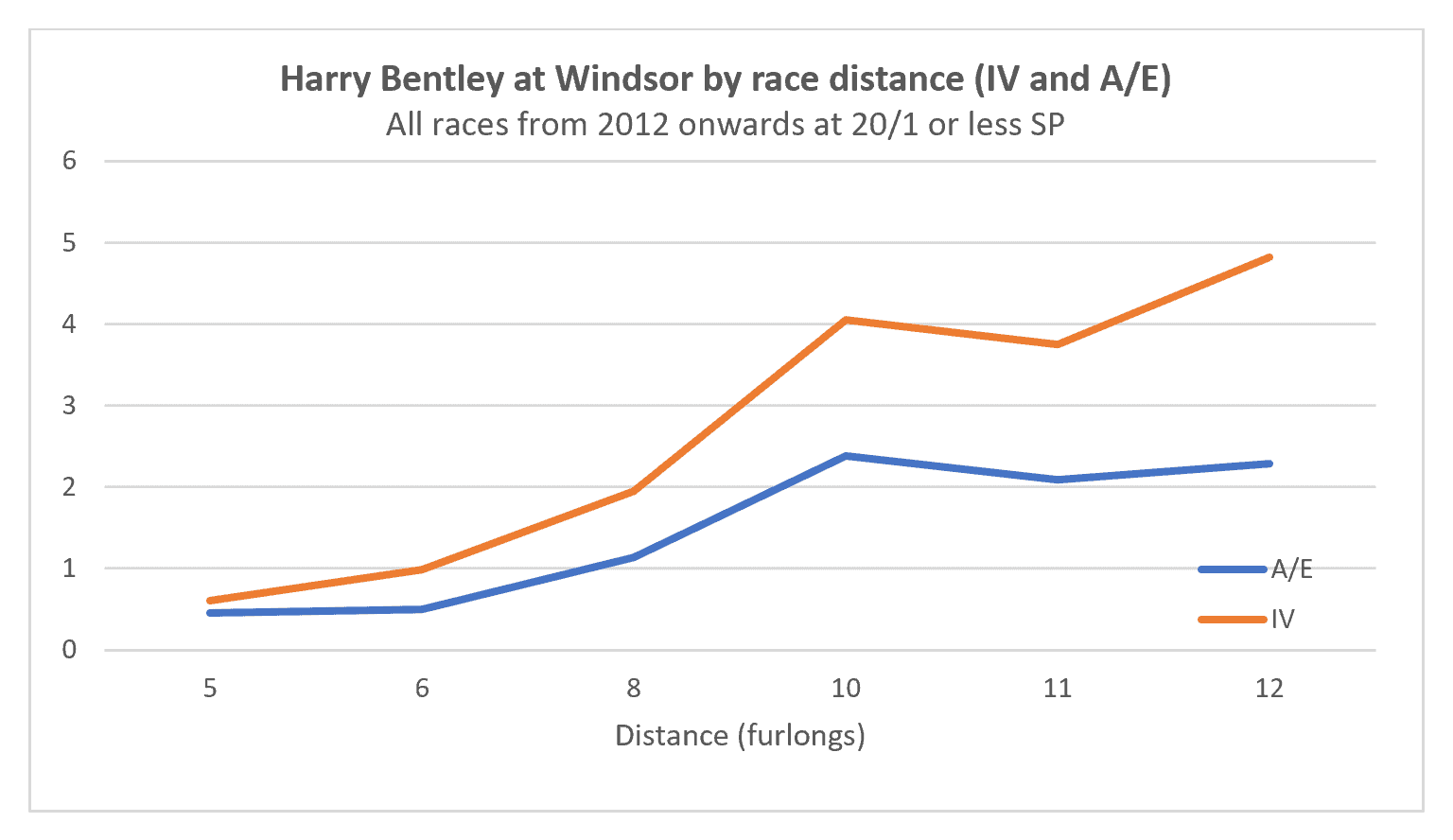 That will do as a nice micro to test.

Suggestion: back horses where Harry Bentley is the jockey at Windsor at distances of 8 furlongs or greater (SP 20/1 or less)

That about wraps it up for this edition. I plan to dive into some other UK courses over the coming weeks and months which I hope will be of interest (and potentially utility). I did plan to evaluate pace/draw, course experience and other factors but lost the battle with time on this occasion.