Welcome to the first in a new series of daily (Monday to Saturday) articles aimed at helping you to sharpen your betting focus. We've somewhat unimaginatively called the series Racing Insights, and I very much hope that's what they will provide.

Replacing Stat of the Day was always going to be emotional for some of that long-running feature's army of fans, but the time was right to step away from tipping and pivot the focus from 'the answer' to 'the working out'.

That means that some days, perhaps more often than not, there won't be an obvious pick within the Racing Insights piece. But what there will always be is reasoned argument whilst working through a race. Those reasonings start at the helicopter level of a whole day's racing: choosing our battles carefully is one of the most important aspects of betting, and one which is generally overlooked.

It took Stat of the Day a good four to six months to establish its style, so please don't expect Racing Insights to be cast in stone by the end of this week. Also, we're keen to make it something that can help with any challenges you might have - we can provide answers from time to time within the content here - so please do feel free to ask your burning questions in the comments!

Enough with the preamble, let's get this new show on the road...

Tuesday 29th September offers free subscribers six Gold races from the 47 races across UK and Ireland. These are as follows:

From that sextet, I'm going to focus on Ayr. The two races listed there are to be run over six and seven furlongs respectively, and Dave Renham's fantastic blog on Ayr Draw and Pace biases is an extremely helpful starting point.

To check the latest going, as well as any other relevant updates such as the position of the stalls, I'll go to the BHA's Fixture Updates page (well worth bookmarking). Here I discover the following:

The stalls on the straight track, which includes the six furlong distance, will be placed in the centre of the width of the course; for the seven furlong races, they will be positioned on the outer.

I've also noted that with showers forecast the going might well be good to soft.

Dave's article tells me that the draw bias is all but negated over six when the stalls are positioned centrally:

In the context of this specific race, the 1.30, the PRB (percentage of rivals beaten) chart looks like this: 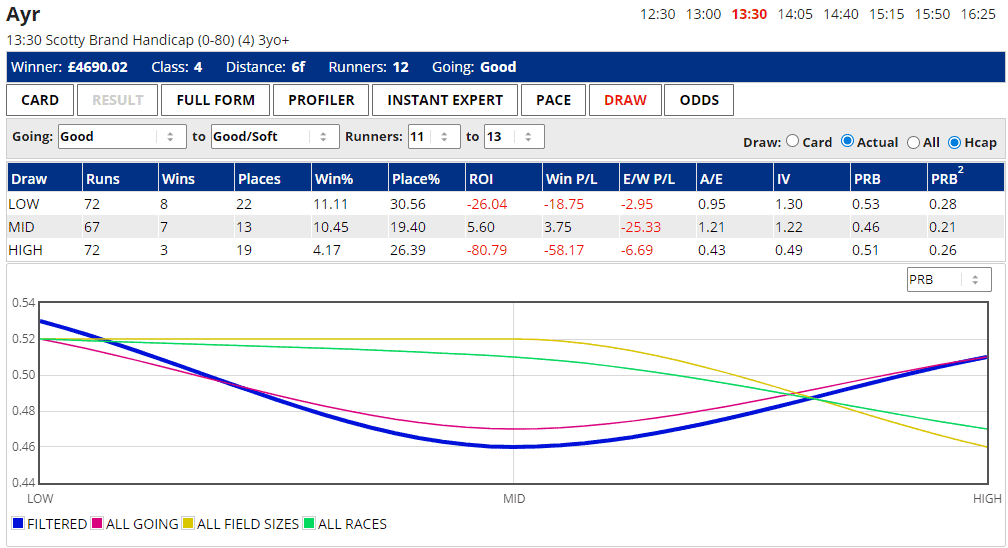 While middle looks unfavoured, one has to be careful as a quick squint at the left hand axis reveals a very tight range of between 0.46 (46% of rivals beaten) and 0.53 (53% of rivals beaten). I wouldn't normally consider anything in the 0.46-0.54 range to be material. In other words, this backs up Dave's assertion that draw is largely irrelevant over six at Ayr when the stalls are in the middle.

I don't really feel like I have enough of a route into this race and so I'm moving on to the other Ayr Race of the Day, the 2.05, a handicap over seven furlongs.

Here we can see that there is a sharp bend to negotiate soon after the start and, even allowing for the positioning of the stalls on the outside to enable the field to meet it at more of a tangent, there is still scope for wide-drawn runners to have to cover a lot more ground especially if getting fanned out turning into the home straight:

We can see from Dave's piece that high draws win around half as often as those otherwise berthed:

So it's a knock for wide drawn runners, though not a knockout blow at this stage. However, pace is also a factor with those closer to the speed faring best and those furthest from it doing worst. Below is the draw/pace chart looking at place data on the heat map.

Note that Florenza, and particularly the hattrick-seeking Equidae, are drawn widest of all. They both have some early speed so might try to go forward and tack across. The likelihood, with that bend appearing soon after the start, is that they'll be trapped out wide and I'd be against them on that basis. Of course, if they can get handy and not be four, five or six wide, they'll have their chance. 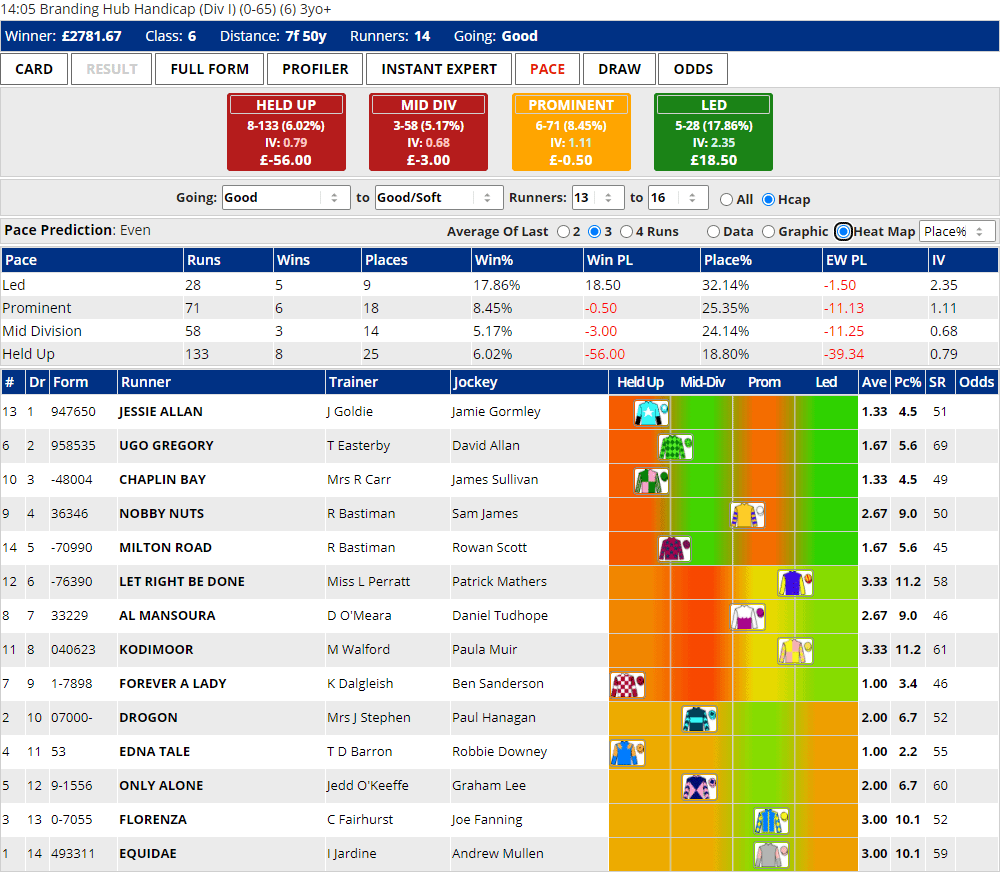 Those most obviously favoured by the draw and pace set up look to be Nobby Nuts, Let Right Be Done, Al Mansoura, and Kodimoor. [Nobby Nuts appears to be in a flash of amber, but one needs to use common sense when considering the data as a whole and the principles of geometry: there is not a huge amount of data with which to work and it stands to reason that a horse near the inner of the field who likes to race handily ought to be favoured - I hope that's clear...ish]

Let's have a look at Instant Expert now: 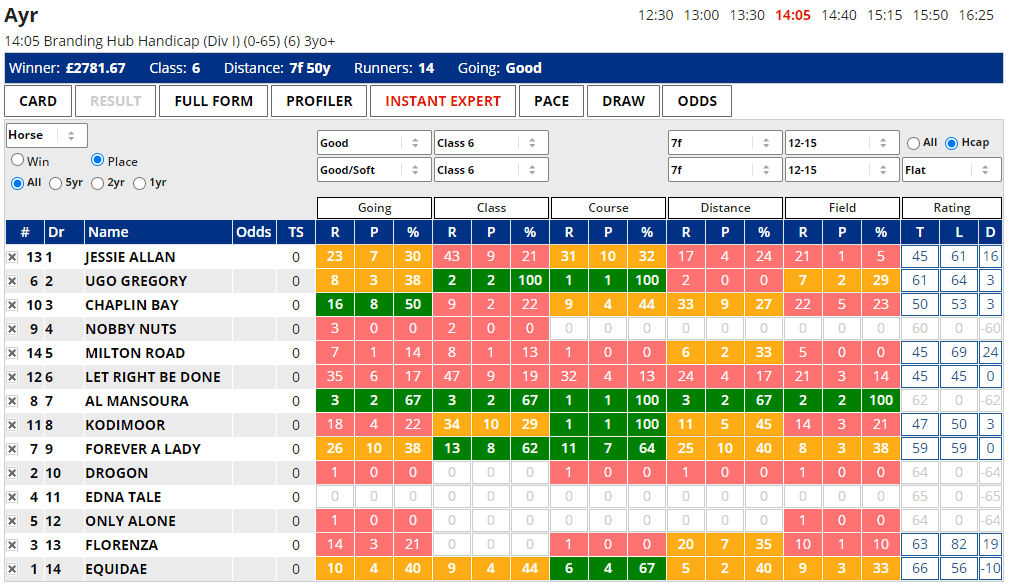 Again, I'm looking at place data (to get a slightly deeper feel for things) and I've set to all horse form, though I often look only at the last two years. And I've ordered by draw because of the bias against those locked in the car park.

I can see that one of the horses I was interested in, Let Right Be Done, has run at Ayr a whopping 32 times in his career, making the frame just four times. That does include a course and distance score on good to soft but he's not really on my shopping list.

Of the exposed runners, Forever A Lady seems to always perform well here. She's on her last winning mark (59, see the right hand column in Instant Expert) and has made the frame in five of seven course and distance spins. Note also that, in spite of generally having been held up recently, she's (sensibly!) normally ridden more prominently over this track and trip. Stall nine doesn't massively help but she'll probably a big price to offset the risk.

Al Mansoura has a lot less data in the visual than most of her rivals, but what little there is is green: she was a neck second to Equidae on her only course run, which was also over this range and, with a kinder draw than her conqueror then, she has a strong chance to reverse that form. She's been beaten a neck a couple of times now, however, and remains a maiden after five runs. That does also mean she can probably improve from her current rating.

Interestingly, trainer David O'Meara and jockey Danny Tudhope both have fine long-term (C5) records at Ayr, the latter also in excellent recent form as shown by the green 14/30 indicators:

O'Meara persists with the cheek pieces even though Al Mansoura ran poorly in them on their first application last time out.

Nobby Nuts is another three-year-old with little data to go on; but he has that good draw and can go forward. Also, he's dropping back in trip having failed to see out a mile last time and he's dropping in class (see the down arrow to the right of his name). He's quite interesting

A third three-year-old is Edna Tale and her trainer's record with handicap debutants would have made her of interest on another day; but the combination of David Barron's poor recent form and her moderate wide draw mean she's got plenty on her plate for all that she's only had two goes thus far and is almost sure to be better than we've seen.

Of the more exposed runners, Kodimoor is one-from-one at the track, in a Class 6 seven-furlong handicap, the same setup as today. He seems to handle all ground and only conceded the lead in the last furlong when racing over Beverley's stiff mile last time. Paula Muir rode him there and keeps the mount. As can be seen below from the RS (Run Style) column on the Full Form tab, this lad has led in his most recent two starts and may again attempt the front-running tactic.

It's a very tricky 14-runner low grade contest, but the widest stall for the most in-form horse might make the market for anything else we fancy. In that context, Kodimoor is interesting and I suspect he'll make a bid for the lead, his draw in 8 mitigated by a number of typically steadier starters inside. But he may get run down in the final furlong by one of the less exposed three-year-olds. It would be no surprise to see Forever A Lady significantly outrun her odds.