One of the elements that separates the betting improvers from the stay-the-samers is reviewing matters after the fact. Because Racing Insights is more of a stream of punting consciousness than a tipping column, it allows us to - Janus-like - look back as well as forward. That's a verbose way of saying we'll include any observations from the previous day which might be useful in future. We might call that Racing Hindsights...!

Looking at yesterday's inaugural offering - link here - the draw/pace combination did for form horses Equidae, as predicted, though the market also foresaw that, his odds drifting from 7/2 to an SP of 15/2. He finished 11th of 14 having got shunted wide and never securing an effective racing position.

At the sharp end, I overlooked the winner - and favourite - Ugo Gregory on the basis that I didn't want to be with a hold up horse. As it happened, there was a lot of pace, more than expected, and that set things up for the well-drawn waited-with victor.

A couple of takeaways: firstly, in this race, Nobby Nuts was ridden more patiently than has recently been the case, and encountered a little trouble in running. He stayed on for a never nearer sixth, and might have been fourth with a clear passage. He wasn't unlucky as such, as he'd have never troubled the first two, but he goes in my tracker with the following comment:

Nothing to go overboard on, but could be a fair price and offer a bit of value in a big field soon.

The second point, and a good one for me personally, was that although the prominent low draws didn't land the spoils in the featured seven-furlong handicap, they did in the other two races. Both Highfield Princess (11/4) and Redarna (13/2) were very well backed (including by me 🙂 ) and won comfortably. The takeaway is that Ayr's seven furlong range is one where low/prominent is a setup from which to find a bet; and kudos to Dave Renham for flagging that. His work is something we may return to regularly.

To Wednesday's racing. Feature of the Day is the Trainer Statistics report, which is free to all registered subscribers. Register here if you need to.

Wednesday's free Races of the Day are

Let's take a look at the Trainer Stats report, Course 5 Year view. I have some filters set, which are 15 runs minimum, A/E 1.25 and IV 1.5. If you want to know more about those metrics, you should check out this important post. Just understanding these numbers - and putting them to work for you - will give you a head start on almost all punters. Obviously, feel free to set these filters up in a way that suits your personal tastes.

I've clicked the A/E column heading to sort by that column, largest first, and that gives me a list of trainers and their horses to look at more closely. 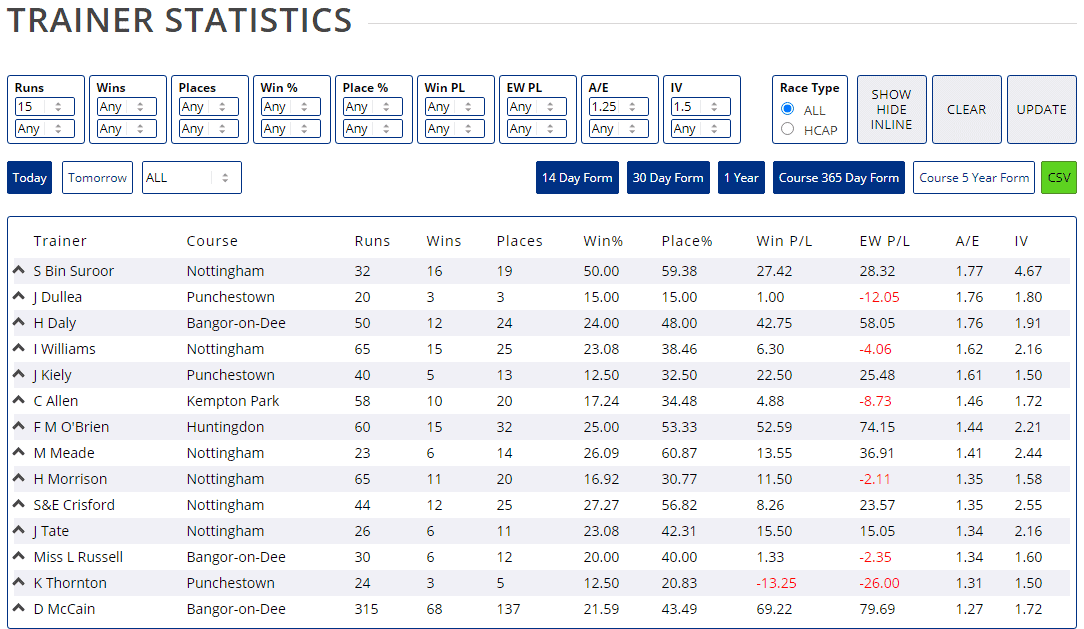 I'm immediately struck by the top row which tells me that Saeed bin Suroor has a 50% strike rate at Nottingham in the last five years. When I click on the little black down arrow to the left hand side of his name, it shows me his actual runners. (This past history table can be sorted by any column, so you can see, for example, whether they were all shorties, or for a particular jockey, or if the winners were a long time ago, etc). 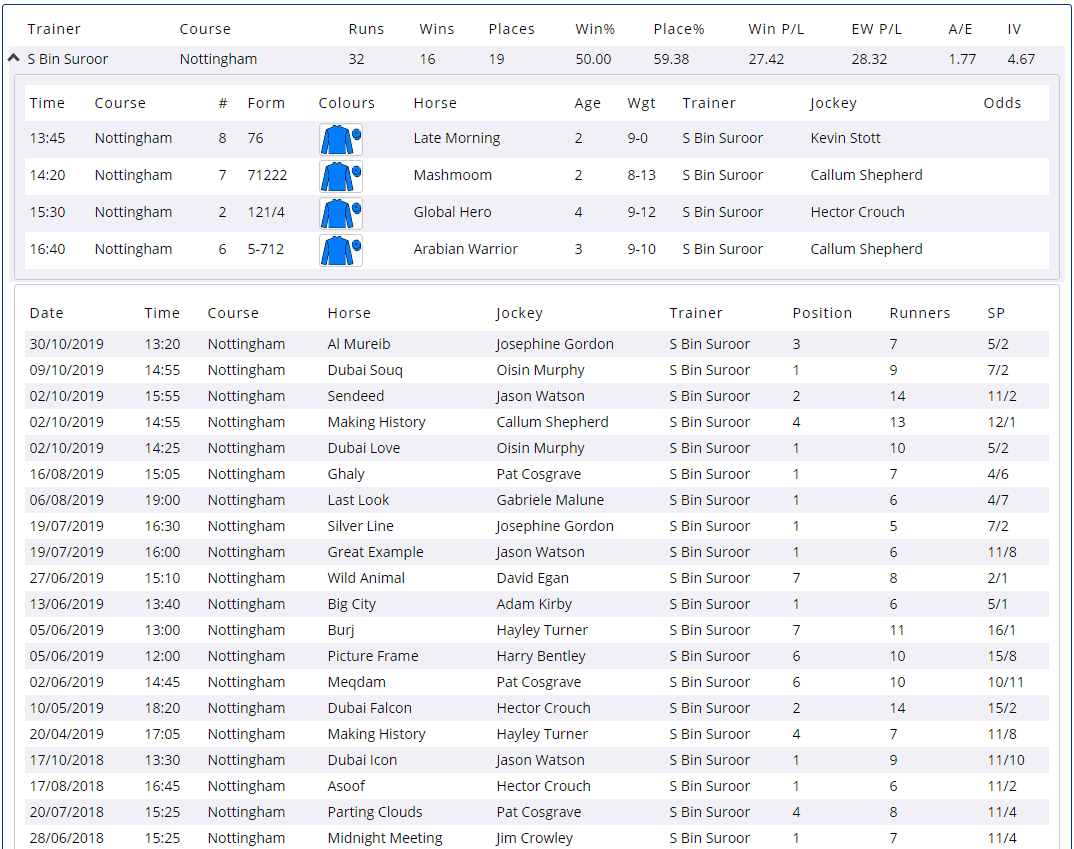 There's lots of recency in the winner column, and for a range of jockeys. Most were at the 5/1 or shorter price point - no odds on site at the time of writing - so we might want to focus at the sharp end.

Picking between the quartet is bound to lead to egg on face, but I will highlight one of them for the sake of this piece. Global Hero had a long time off and was entitled to need his comeback run. We can see from the inline trainer data below that bin Suroor's record with horses having their second start in a handicap (note also the HC2 indicator adjacent to the horse's name) is very strong - 28% - as is his record when he steps one up markedly in trip, nigh on 30% of those having won in the last two years.

It's a competitive race, and a good race, too; but he is interesting as a starting point. 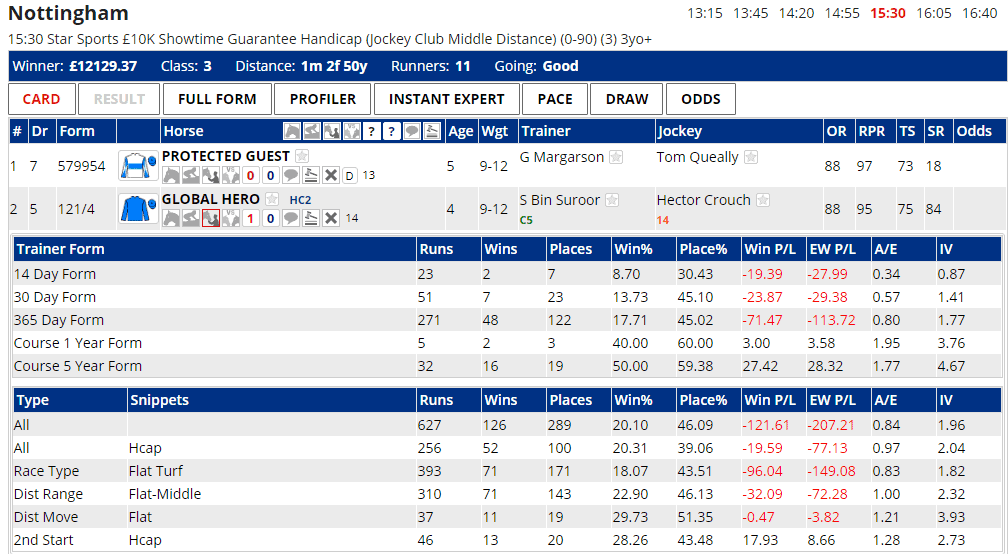 That's all for today. Remember, these articles will always have a beginning (the retrospective on the previous day) and a middle (some thoughts and observations around potentially playable angles for the following day's racing), but they may be lacking an end - a pick.

Sometimes they will, sometimes they won't. As you'll doubtless already be tired of reading, that's not the purpose of Racing Insights.

Do please leave a comment with any thoughts or questions you have, and we'll try to address them in subsequent days.

Listed honours for Keats at Cork