geegeez.co.uk runs a handful of select racing syndicates. Our syndicate members are part-owners of the horses with all that that entails: paddock and Owners' Enclosure access at the racecourse, stable visits, regular updates and, of course, an equal share of prize money and sales revenues.

Syndicates are usually ten to twelve shares, and a share entitles the shareholder to owners' privileges at the races when your horse runs. And we organise visits to see the horses, the stables and to meet the trainer and his team.

We do NOT organise betting coups or provide any type of 'in the know' special information. But of course you will receive regular updates on your horse's well being, race plans, fitness and so on.

Most of all, geegeez syndicates are put together to allow like-minded people to enjoy the thrills and spills, highs and lows of racehorse ownership at a fraction of the price of sole ownership.

All administration is dealt with, and the only 'admin cost' is 7.5% of the sale price of the horse at the end of the syndicate term.

Details: Half brother to stakes performers London Protocol, Amor De Ma Vida and High As A Kite (4 Listed wins, including the Norwegian Derby).

This strong four-year-old gelding is a very exciting recruit to the hurdling sphere. Having run second in a junior bumper (National Hunt Flat race) over 1m6f on his debut, he has since been campaigned exclusively over shorter distances on the flat.

Although he managed to win a Southwell novice event over a mile, Olly and I feel certain that he ought to have more to come both for a step back up in trip and less forceful riding tactics.

The form of the junior bumper could not be stronger: the winner and third  both won Listed races within two starts of the Huntingdon race; and both ran in the Champion Bumper, a notoriously difficult contest for four-year-olds, with Ocean Wind managing an impressive sixth of 23 starters. They were rated 130 and 118 respectively ahead of that Champion Bumper.

Since then, Ocean Wind has gone on to be rated near 100 on the flat (over staying trips), and the fourth placed horse, Shinobi, bolted up in a novice hurdle by seven lengths. And the sixth horse, Hooper, recently won his only subsequent start.

Take a look at the RWP columns (subsequent Runs, Wins, Places) to see how well this form is working out!

We're obviously very excited about stepping this lad back up in trip to what we feel will be his metier, and we were delighted to secure him for 22,000 guineas (£23,100).

As of mid-September, Mak is having a short break to freshen up prior to going into pre-training at Charlie Poste and Francesca Nimmo's excellent 'Swiss finishing school'. He'll be back at Olly's in late October with a view to making his hurdling debut in December.

He is syndicated into eleven equal shares, each at a cost of £4,000, which covers purchase and all racing costs until 31st August 2021. A payment plan is available on request. Contact Matt directly at for more information and/or to reserve a place.

We have a very exciting team of novice hurdlers for the 2020/21 campaign, and I'm confident Olly will get the best out of this well-bred four-year-old with excellent form credentials.

Breeding: by Soldier Of Fortune out of Moscow Nights (Peintre Celebre)

Details: Half sister to the very smart Heartbreak City (Ebor winner, second in the Melbourne Cup) and high-class flat stayer, Melburnian. This beautiful moving filly is a very exciting prospect. She will be trained with the intention of running as a juvenile on the flat in late 2018, before a full three-year-old campaign in 2019. But it is when she goes hurdling that she ought to really come to hand.

Racing career: Our star so far, 'Cookie' ran five times in National Hunt Flat races. After finishing good seconds in her first two, she then won three in a row, including most recently the Listed Mares' Bumper at Kempton. She is a VERY exciting hurdling prospect for 2020/21 and will have the Mares' Novices Hurdle at the Cheltenham Festival as her ultimate target. 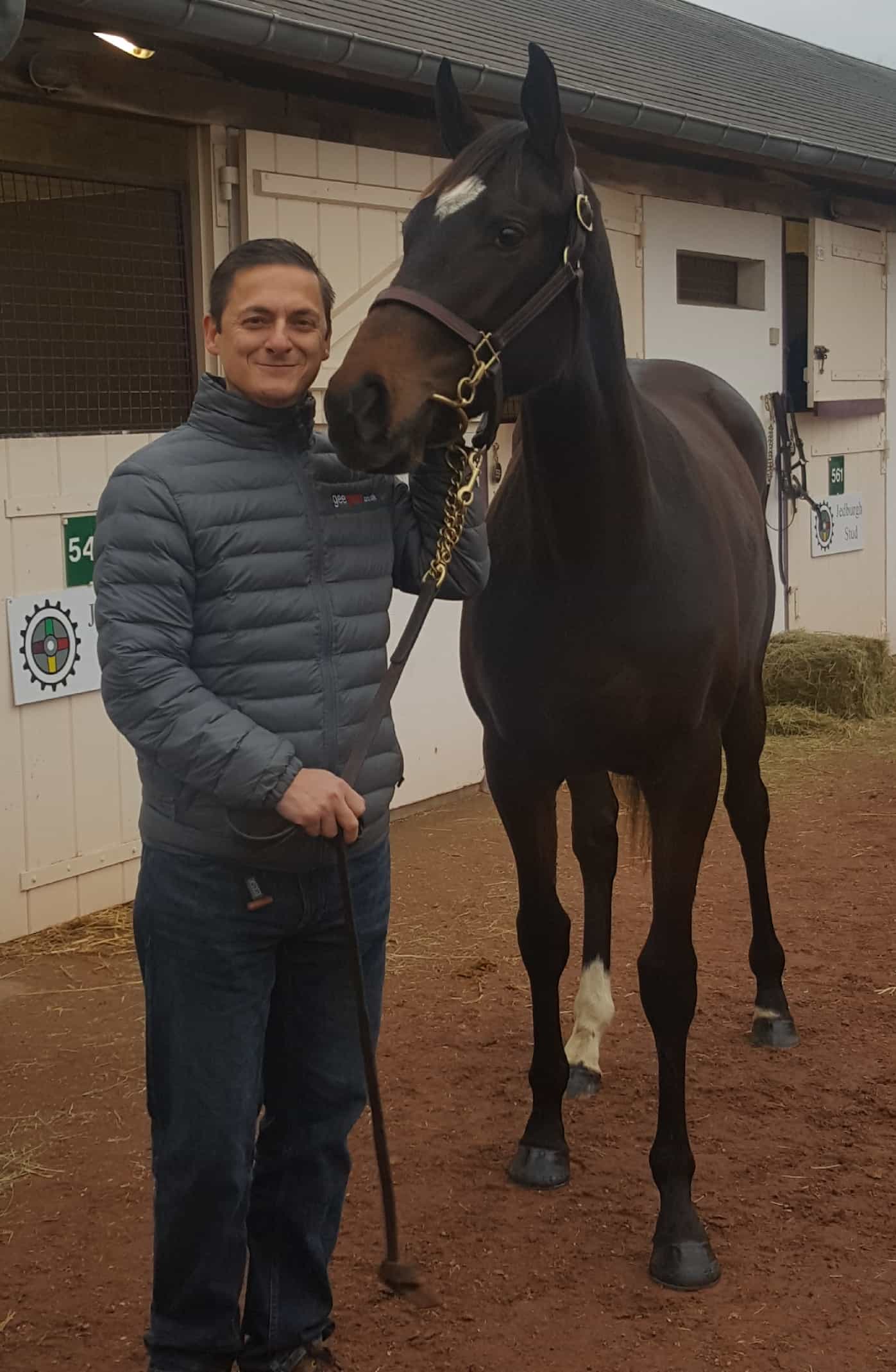 The plan is to bring her straight into light training for four to six weeks before allowing her time in the paddocks to grow, both physically and mentally.

Thereafter, she'll be brought back in around August and trained with a view to running in a mares' junior bumper and, if showing enough ability, will be targeted at the Listed Junior Bumper at Cheltenham on New Years' Day.

Having taken a while to come to hand, and then succumbing to a virus, Windswept Girl made a belated racecourse debut in a two mile bumper around Taunton's sharp circuit in February 2020. We were hoping for signs of promise as we feel her best form will be around three miles over hurdles or fences. Se we were delighted when she absolutely bolted up by 13 lengths, going away. It was quite possibly a moderate race but there was no denying the promise she showed and we're excited to see how she progresses from there.

Breeding: by Speightstown out of Albamara (Galileo)

Details: Mixed messages in his pedigree, his previous owner paid more than half a million for him as a yearling and sent him to John Gosden. We picked him up for a rather more modest 20,000 guineas.

Racing career: Initially raced over middle distances we've finally discovered the key to him up in trip. Since stepping him up to beyond a mile and a half he's finished 121, the second placed finish being almost ten lengths clear of the third! He remains unexposed over a trip and may make into a promising hurdler.

Breeding: by Charm Spirit out of Ravensburg (Raven's Pass)

Details: Bought relatively cheaply (£12,000) from the Ascot August 2019 sale, he came with in-and-out form. We felt he was worth the gamble for his high winning strike rate.

Racing career: Since switching to Mick he's continued his 'binary' win-or-nowhere form profile but has managed to two victories to bring his career tally to five (23% lifetime win strike rate). He goes to the sale on 10th July 2020. 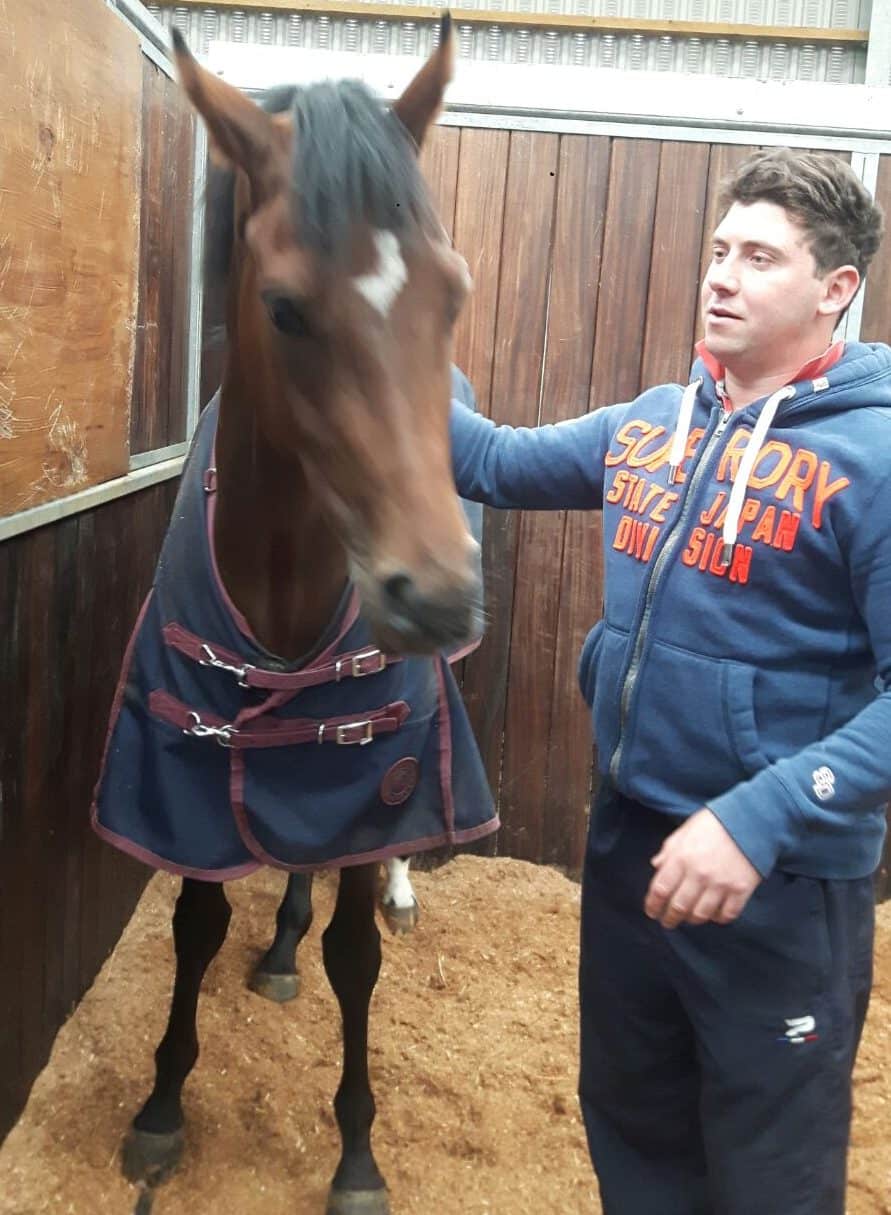 Breeding: by Aqlaam out of Blue Zealot (Galileo)

Details: Winner of two races on the flat for Sir Mark Prescott, 'Obie' was acquired privately to go juvenile hurdling. An impressive 20 lengths winner on his hurdling debut, he was then a touch outpaced when fourth next time out. Has been awarded an initial mark of 125, which was unchanged when he finished a close 3rd on his third hurdling start.

Finished a close second in a Class 3 handicap hurdle last time and gave us a huge thrill when racing as our first Cheltenham Festival runner.

Breeding: by Jeremy out of Ballygologue (Montjeu)

Details: A dual winner for us and super consistent, he was claimed for £14,000 after his second win in March 2020. Swaffham was a great fun horse and gave us plenty of exciting days out!

Swaffham Bulbeck (3rd in line) schooling on the grass