3.30 Naas : Hong Kong @ 10/3 BOG 10th at 3/1 (A little slow into stride, mid-division early, 8th approaching halfway, pushed along straight, tight for room on inner over 2f out, soon one paced) I'm certainly finding the Irish racing much harder to read.

Tuesday's pick runs in the...

Before I post the daily selection, just a quick reminder of how I operate the service. Generally, I'll identify and share the selection between 8.00am and 8.15am and I then add a more detailed write-up later within an hour or so of going "live".

Those happy to take the early price on trust can do so, whilst some might prefer to wait for my reasoning. As I fit the early service in around my family life, I can't give an exact timing on the posts, so I suggest you follow us on Twitter and/or Facebook for instant notifications of a published pick.

Timeform say this looks an above-average bumper with our pick setting the standard having finished behind a pair of subsequent winners when third at Fairyhouse last month, one of which was Ferny Hollow, who went on to win the Champion Bumper at Cheltenham.

Now, as usual, full honest disclosure from me, I don't bet much in Irish races (although that's changing by the day) and I don't get involved in Bumpers too often either, so you can imagine how often I play in Irish Bumpers! That said, I do adopt a quality over quantity position regarding the INH Flat races and one of my starting points are horses trained by Gordon Elliott and ridden by Mr JJ Codd (who is in good form right now, as it happens).

...suggesting...a 1pt win bet on Frontal Assault @ 11/4 BOG as was offered by BetVictor & Hills at 8.00am Tuesday, but as always please check your BOG status. To see what your preferred bookie is quoting...

REMINDER: THERE IS NO STAT OF THE DAY ON SUNDAYS

P.S. all P/L returns quoted in the stats above are to Betfair SP, as I NEVER bet to ISP and neither should you. I always use BOG bookies for SotD, wherever possible, but I use BFSP for the stats as it is the nearest approximation I can give, so I actually expect to beat the returns I use to support my picks. If that's unclear, please ask! 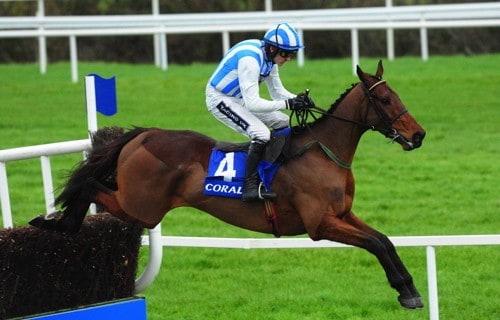 Killultagh Vic was the first high-profile Irish horse to miss Cheltenham with injury but you can be sure he won’t be the last, writes Tony Keenan. We are in that horrible space between the conclusion of most of the trials and the start of the Festival where owners, trainers and, yes, punters live in terror of hearing that their horse will miss the meeting with a late setback.

It makes sense that injuries should occur at this time. No more than a human athlete getting ready for a career-defining event, the revs are being cranked up to the max in preparation and it is inevitable that a gasket or two will blow in the process. Some trainers has succeeded more than others in avoiding – or preventing – the last-minute injury; Willie Mullins stands out in terms of getting his Cheltenham horses to end point and punters can rightly have faith in backing one of his runners ante-post at a short price in the relatively safe assumption that they will get to post. But other handlers have not been so fortunate (though perhaps fortunate is the wrong word as it is surely a skill to keep horses sound).

Predicting which trainers’ runners will make or miss Cheltenham by looking at data is difficult if not impossible and it makes more sense to look at a more global sense of how successful they are in keeping their horses sound from season to season. In the table below, I’ve focussed on the top 15 Irish trainers in terms of winners sent out in the six seasons from 2009/10 to 2014/15, leaving out those who are no longer training, i.e. Dessie Hughes and Charlie Swan.

I found every horse they had in that period that acquired an Irish official rating of 130 or more and went through their racing career in totality regardless of whether it began before 2009 or continued beyond 2015. I was looking for how many ‘full seasons’ they had in their careers and I took a very loose definition of what a full season was: a season in which a horse ran twice or more in the Irish National Hunt campaign which takes the Punchestown Festival as its start and end point.

To my mind, this is quite a lenient definition of a full season – many owners would want their horses to run far more regularly – but I was giving trainers the benefit of the doubt and I didn’t penalise for a horse only running once in their first season as trainers often want to start them off slowly. With the number of full seasons and missed seasons I worked out a figure called ‘attrition rate’ which expresses as a percentage how often a trainer’s horses miss a season in relation to their career as a whole.

Take Tony Martin as an example. In the period covered, he has 131 full seasons from his 130-plus rated horses and six missed seasons; I add the two together to get a total season figure which is 137 and then divide the missed season number into it to leave an attrition rate of 4.4%. As a back-up figure, I also added in how many runs a trainer’s horses averaged per season over that period.

This methodology is far from perfect. Firstly, it looks only at horses rated 130 or more, but the data was so overwhelming that were I to look at them all I’d struggle to have it finished for Cheltenham 2017! It also supposes that every National Hunt horse threads the same campaign trail, starting its season in the autumn and running through to the late spring/early summer. This is not the case with summer jumpers and many horses will have a winter break to avoid the worst of ground.

Using my method, horses could miss two calendar years but only one racing season. Monksland, say, missed 730 days between December 2012 and December 2014 but raced three times in the 2012/13 season and the same in 2014/15 campaign so is only penalised for being absent in 2013/14.

Furthermore, trainers are not penalised for horses having a short career of a season or two but they are hit for getting a horse back off an absence of a season or two for just one run, despite the fact that this could be a major achievement if that horse has had serious problems. Despite all this, I think there is enough in the data to make it interesting to look at, if not necessarily of vast predictive value.

We’ll start with Willie Mullins as we generally do. He has a highish attrition rate and the lowest average season runs so comes out quite badly on these numbers though I doubt Rich Ricci, Graham Wylie et al will be moving their horses in light of them! In fairness, he has improved recently with most of his absentees coming in the early part of the period covered though it must be said that he has quite a few horses that are in danger of missing this campaign, the likes of Abyssial, Jarry D’Honneur, Champagne Fever and Analifet all on the easy list at the moment.

Charles Byrnes has a very high attrition rate, 5.6% higher than the next highest, so perhaps landing gambles takes its toll! His achievement in bringing the nine-year-old Solwhit back to win at Cheltenham and Aintree in 2013 was a notable one but it seems significant that so many of his best horses have missed chunks of time, the likes of Mounthenry, Pittoni, Trifolium, Weapons Amnesty and Our Vinnie all having stop-start careers.

Colm Murphy is another that comes out poorly on the numbers, having not only a high attrition rate but also a low average runs per season, though the reason behind this could be one discussed in a previous article of mine on fall/unseat rate where he came out as one of the highest in the country. Falls and unseats will clearly cause plenty of injuries.

One trainer who does quite well is Gordon Elliott, his horses generally sound and running often, and it needs to be pointed out that he gets quite a few stable switchers. That can be viewed positively or negatively; either someone else has done all the hard work or you have to rectify another trainer’s mistakes.

Noel Meade is having a torrid season in terms of injuries, with Road To Riches having a curtailed campaign and Apache Stronghold out for the year. His attrition rate, third overall, would suggest this is not uncommon. One thing to admire with Meade is that no one else comes close in terms of openness around his horses’ health and he must be praised for that.

In terms of positives, Jessica Harrington stands out as having a low attrition rate and a high average number of runs. I would put this down to two things: she tends to mix flat and jumps campaigns, the former clearly less attritional than the latter; and she will often give her horses mid-winter breaks to avoid the worst of ground, something she frequently references in stable tours.

Edward O’Grady has the name of being hard on his horses but the numbers suggest otherwise, coming in the equal of Harrington in attrition rate. Henry De Bromhead has relatively a low attrition rate too, albeit with not many average season runs, and tends to do well in keeping older horses sweet. Sizing Europe is the daddy of them all but the likes of Sizing Australia and Darwins Fox are further feathers in de Bromhead’s cap.

Finally, mention must go to Michael Hourigan. His attrition rate percentage is only average but he is brilliant in terms of getting runs into his horses, his average of 7.3 a full run per season better than anyone else. I won’t say his horses are always in form but at least they’re out there competing and it is notable that eight of his 16 horses rated 130 plus raced at least 30 times. There are some real heroes in there like Dancing Tornado and Church Island and of course A New Story who ran an amazing 110 times, often over staying trips, and was still racing at fifteen.