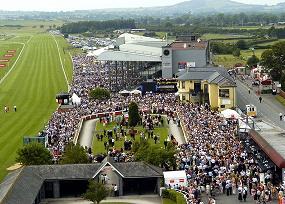 I managed to the get the flat season – or at least the punting part of it – up and running at the Curragh on Bank Holiday Monday with a pair of decent winners in Ondeafears and Wrekin Rock; that the pair came in 50-80 handicaps should come as no surprise to anyone who knows my punting methods.

I realise there is something perverse in making your biggest plays in the worst races on the card – that was certainly the case here with the winners returning the worst and second-worst form ratings of the meeting – but I’m a contrarian by nature and handicaps are very much my bread-and-butter.

Group races just don’t do it for me and while some will argue that the perils of punting in such events were brought into sharp relief later on the card with the St Nicholas Abbey debacle in the Mooresbridge Stakes, I don’t agree. That race saw what was palpably the best horse getting turned over but such results are the exception, the problem with playing in pattern races from a personal punting perspective being quite the opposite, i.e. that the best horse wins all too often.

For me, this isn’t a good thing because such horses are all  too obvious and invariably sent off at short prices; what I really want in a race is complexity – whether it be provided by pace, handicap marks, track or draw biases or any number of other variables – as this provides the possibility of a big score. Handicaps, by their very nature, are complex in that their stated aim to give each horse an equal chance and the fastest horse does not always win.

One of the best things about handicaps is the predictability of pace. Exposed handicappers have a running style and by-and-large they stick to it; to change it could compromise their chances. This means one can a have very good idea how a race will be run beforehand which is helpful as one can see how the likely pace scenario will favour one type of runner over another; there may be a front-runner that is going to be left alone in the lead or there may be loads of pace on which will suit closers.

Not only is such pace analysis a useful tool pre-race, it comes in handy afterwards when reviewing a meeting as one can come up with a sensible idea of which horses were advantaged or disadvantaged by the run of things; knowing how the race was expected to be run makes this sort of work far easier.

Analysing pace in other races is much more problematic. In maidens, a punter has little or no evidence to go on with running styles and oftentimes pace becomes an irrelevance as there is such a differential between the ability levels of runners. Group races are even worse, especially in Ireland, and Ballydoyle have to shoulder much of the blame for this. Such is their strength of numbers they can choreograph Irish group races which is not something that can be achieved in England and further afield where the competition is much stiffer.

The best example of this was last year’s Irish 2,000 Guineas where the Aidan O’Brien-trained Roderic O’Connor defeated the best horse in the race Dubawi Gold by dint of tactics, something Dubawi Gold’s jockey Richard Hughes was well aware of in his Racing Post column on the morning of the race; the winner finished the season pace-making in the Irish Champion Stakes while Dubawi Gold was in the frame of Group 1s with Excelebration and Frankel.

Pacemakers are another complicating factor in Irish Group races as one never knows what Ballydoyle are going to do with a race; sometimes they want a breakneck gallop, other times they want to slow it down for a suspect stayer and there are even occasions when they hardly know what they want. Getting stallion prospects is the raison d’être of the yard and it seems that any horse can be sacrificed at the altar of bloodstock, or at least a sire you can charge at least €50,000 a nomination for.

With the Ballydoyle horses, their run styles change markedly from race to race; what a horse did when a short-priced favourite for a Group 3 bears no resemblance to what it is likely to do in a Group 1 next time at 50/1 when the yard has a fancied horse they perceive needs a certain pace. I suspect this sort of chopping and changing  is not good for individual horses are they are not allowed to get into habits on the track and stunts their development and I am sure it is bad for punters who simply don’t have a clue how each horse well be ridden.

Another factor that keys in with pace is track configuration; some tracks favour certain run styles and horse types. The problem with Irish group races from a punting point-of-view is that the vast majority of them are run at the Curragh or Leopardstown, a pair of tracks that are in the main very fair. This is important when one is trying to further the breed and simply find out which is the quickest horse but it reduces the complexity of races and thus makes them less interesting betting mediums.

Personally, I would find pattern races much more interesting if they were run on the Naas sprint track on soft ground (high numbers all the way), at Tipperary (a front-runner’s paradise) or even around the up-and-down Western gaffs like Galway and Ballinrobe (chaos rules).

With the top group horses, punters often need to ask themselves how much more they can know than the market; here are a coterie of talented horses who make up about 10% or less of the equine population yet take up about 90% of the column inches on horse racing (rough figures I know, but you get my meaning).

You may hold a low opinion of the standard of the racing media (I know I certainly do) but the more information they have the more they are likely to spot value and point it out to the public and the few good analysts there are among the media soon spot pricing errors in the top races. With handicappers, it’s a different story.

The proclivities of exposed handicappers may be clear to someone going through their form in detail but they are not covered in media in any great detail and this is where a shrewd punter can get an edge on the market. It seems no coincidence that a number of the punters and analysts I respect – Hugh Taylor, Tom Segal and Dave Nevison in his prime – do a lot of their backing/tipping in fields of older handicappers. Personally, I would have every confidence in playing my knowledge of Irish handicappers against most punters and certainly against the odds compilers.

I suppose an awful lot of this boils down to an old chestnut of punting: specialisation. A punter simply cannot know everything and one has to find races that suit your style. I don’t want to rule out group races entirely as I’m sure some punters swear by them and one should never be dogmatic about rules in racing as one never knows when a good betting opportunity will arrive. It may well be in a Group 1 but somehow I doubt as handicaps have provided most of the best bets of my life.