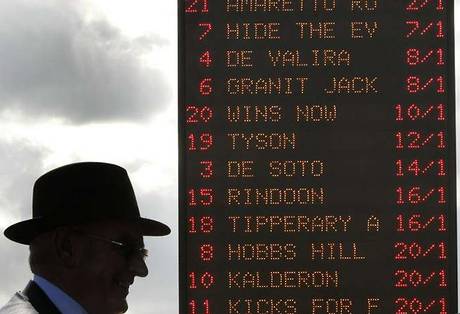 The Price is Right?

And we don't mean that terribly tacky game show we imported from the States in the 1980's. In this week's Punting Confessional, Tony Keenan explains how to get the right price for your wagers and the importance of doing so, using a couple of examples from...

I had a pair of bets at this mixed meeting last Thursday, Alla Speranza at 10/1 and Authorization at 16/1, both at morning prices, with the former finishing up at 8/1 and the latter at 5/1, with respective Betfair Starting Prices of 12.o and 7.7 (I include the BSPs as they tend to give a fairer reflection of the market than the larcenous percentages bet to by the Irish on-course layers). Certainly, they performed in contrast to market expectations, Alla Speranza going down by less than a length despite being stagnant at best while the gamble on Authorization went astray as he finished fifth. It was yet another example of how drifters and steamers often perform in contrast to what the betting said beforehand and that the market gets it wrong frequently.

Getting the best price about a horse should of course be every punter’s aim and certainly one can develop a gut feeling for the sort of horses that are consistently under- and overrated by the market. Achieving this aim alone could help a few punters reach profitability while it would certainly limit the losses of all. It is worth remembering however that no one can get price-taking right the whole time; it is impossible to call the market correctly the whole time (unless you are putting down such substantial bets that you are influencing the entire thing) so resign yourself to a number of incorrect calls.

A good general rule to apply is that if you are satisfied the price is value, then take it unless you have good reason to believe you will get a bigger one by waiting (more of this anon). Remember that if you think a horse is overpriced and have a track record of calling these things correctly the chances are others will hold the same opinion. One needs something of substance to base this judgement call on; your own tissue prices are the obvious place to start or at least some sort of target price that has been ascertained before you see the available odds.

One thing that won’t help you after you have taken a price is to continually check the odds of your selection and whether it is shortening or drifting; the psychological theory of investment (as I read in a book called ‘Nudge’) suggests that when we continually checks whether the value of our investment is rising or falling, it affects our attitude to risk, making us more risk-averse, clearly not what one wants as a gambler. I do acknowledge that this is something of a double-edged sword as a punter has to check prices as part of their routine but it is worth being aware of the psychological problems this can cause.

With calling the market, one needs to be aware of the various influences on it and by so doing one can improve their market reading. Tipping services are the most obvious place to start and the main ones have a huge influence. Pricewise in the Racing Post is the daddy of them all in terms of power but one thing I find hard to listen to is punters continually bemoaning Tom Segal putting up one of their fancies and contracting the price. With Pricewise, punters know the sort of race Segal will be tipping on – usually the big handicaps or group races of the day – and if you are concerned about him giving your selection then you need to get on the night before; with this sort of race, the markets are available from the day before the race if not even earlier so there is no excuse for not having at least half the stake on before the day of the race.

In reality, Segal’s doings have no real impact on my daily punting as he rarely does Irish racing and Gary O’Brien of attheraces has a much bigger influence on the market, not least because most of the Irish morning prices are fragile. One needs to be aware of the time his tips go up – usually between 10.30am and 11am though not always – and keep an eye on the ATR website. In fairness to O’Brien, the prices of the horses he tips don’t tend to contract instantly so one has a chance to get; from what I can gather this is not the case with the tips of Hugh Taylor whose selections have their prices cut to ribbons within seconds.

With O’Brien, as with any tipster for that matter, it can be useful to pre-empt his selections. Oftentimes he will go for the same type of horse, if not the same horse itself as he has done with something like Sure Reef in 2012; he has put that one up at least four times this year so if you fancied it, it was one to get on early. Pricewise Extra, usually released at midday on the day of the race is another tipping service that has power, notably so when Segal is in situ.

An awareness of stables that like to back their horses, and perhaps more importantly when they like to do so, is another skill of the good market reader. I am not so much talking about traditional gambling yards like those of Charles Byrnes or Tony Martin; horses from that sort of stable are underpriced as a rule and are ones to be against in most cases though they train mainly over jumps so are of little interest to me. Of course, all stables back their horses to some degree or another, some a lot more expertly than others, and if you intend backing one of their runners it’s important to know their modus operandi.

For example, the Reggie Roberts yard seem to have a clear method behind their gambles; they want to get on as early as possible with the morning prices, often long before all the layers have priced up, though I can’t really see this as a good strategy as the limits at this time of the day tend to be restrictive. They landed one such gamble this past weekend with Timeless Call at Dundalk. The Kevin Prendergast stable tend to back their better 2yos early in the morning too and often it is a case that no price is short enough about an unraced sort – see Nurpur earlier in the year at Leopardstown. In such cases, they often become insensitive to price and silly season kicks in so as a rule it’s probably best to oppose them though it should be pointed out that the usefulness of this approach is not what it was with the yard not having so many winners these days.