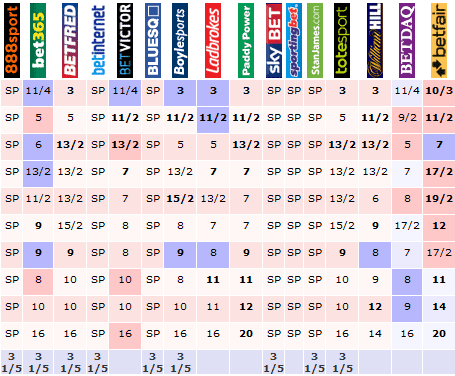 When and where to bet?

Last week, Tony Keenan talked of the importance of getting the right price for your selection. He continues that theme by exploring the timing of your bets and where you should be putting them on, as this week's Punting Confessional comes from..

I had a few quid on Bitsanbobs win and place in the mile maiden at this rescheduled fixture and the 4yo is just the sort of horse I like backing for a number of reasons.

Being trained by Andy Oliver is key as not only is he an up-and-coming handler that the market seems to underrate a little but also his horses are rarely too strong in the betting, the antithesis of those runners from well-known gambling stables I said I generally wanted to be against last week. Bitsanbobs ran a fair race in third but the interesting thing about him was his price; drifting from a morning bookmaker show of around 12/1 to a Betfair SP of 25.47 and 4.9 in the place.

Such a market move would not be atypical for an Oliver horse and there are a number of stables like him in Ireland – notably Ger Lyons and David Marnane – that tend not to ‘go for’ their horses all that strongly; when a stable’s runners tend not to attract money it makes it easier to get on as they may drift on the exchanges and there will likely be less need to chase a price around in the morning. Of course, these are all general points, as there will be times when these trainers try to get a few quid but it the exception rather than the rule.

Speaking of rules, another simple one is to practice patience when you want to back an outsider. In the main, waiting for Betfair near the off is the way to play things with any horse priced in double figures as the nature of the exchange model means that the discrepancies at the bigger prices will be much greater than at the front end. This applies particularly to runners from small yards as they simply don’t have the punters or the money attached to them to compress a price unless there is a serious touch afoot. Holding on until the last minute with a rag and pulling the trigger on a bet in the final sixty seconds before the off is often the best way to play it though again I stress this is only a general rule.

At the risk of stating the bloody obvious, there are two totally different markets for every race: the morning prices provided by the bookies and the exchange market near the off (and in Irish racing, I’m really only talking about the 10 minutes before they jump as this is when the proper money comes in). I wouldn’t even mention the on-course market in Ireland such are the larcenous percentages the layers there bet to; you wouldn’t pay €1.10 for a litre of milk if you could get it for a euro elsewhere?

I think there are probably two optimum times to make a bet in the day. The first is early in the morning between 10am and 11am when a range of bookmakers have priced but have yet to cut their odds. At this point, you are playing your opinion against the odds compilers which is a good position to be in as they’re often wrong, the strength of the big firms’ risk management these days being much more about identifying winning punters and restricting/closing their accounts rather than any traditional bookmaking nous. The obvious problem with playing at this time is getting on and any remotely skilled punter can expect difficulties in this area, particularly in Irish racing where many of the layers seem bet-shy.

The other good time to play is in the final 10 minutes before the off on the exchanges where there can be wild fluctuations in price that make horses that previously looked unappealing become interesting as they drift; one does have to be wary of the ‘slot machine’ mentality here as I’ve written about before. In this case, it’s more that you have the percentages in your favour than backing against another person’s opinion; on Betfair and the like the market will be priced to a tight 104-5% depending on your commission which is often better than the combined prices of all the bookmakers in the morning. Again however, there are problems with this as the price about your fancy may well have contracted and you may have to take a shorter price now though you can probably get on what you like given the sums that are swilling around. The ideal scenario for any punter is to have access to both markets but increasingly winners are being driven towards the exchanges; if I have a preference for one over the other it would be Betfair though that has been born of necessity.

The timing of one striking a bet is thus very important and one thing I tend not to do is back a steamer during the day after the price has shortened. Not only will the value likely have gone (though this is not always the case) but more importantly it is likely the horse will drift again near the off; I find it rare that one will be hammered both in the morning and at the time of the race as in most cases other horses will be backed at this point and the earlier steamer may take a walk. By backing such horses during the day, you’re taking what is often the basement price and no matter how good you are at the form it is hard to turn a profit betting like this.

One relatively recent development, particularly on the Irish scene, has been the arrival of evening or night-before prices with a small number of firms pricing up the better handicaps or group races for the following day. When this began, one would see a number of horses being backed and dramatically so in the evening but this pattern seems on the wane now as realistically no reasonable-stakes punter can get on; if you think the morning limits are bad in Ireland, you should try the to get a decent bet on the night before. I think most punters don’t even bother to try to get on at these prices now and just hope that some small player doesn’t ruin the odds before morning.

Playing to any sort of civilised stake in the night-before markets is one of the easiest ways to spoil an account; you need to ask yourself, what sort of punter wants to make a bet at this early stage if not a clued-in one with his homework done? For a punter playing the long game, getting longevity out of accounts is important, all the more now as the firms will use any excuse to close one.

A final point on night-before prices: playing at this time can be a case of fools rushing in. In the main, it is best to have a spread of prices in front of you than just the offers of two or three bookmakers. This is not to say that the two or three bookmakers won’t make a mistake as they certainly will but they will have a large percentage factored in to allow for errors; as I write the night before the Kilbeggan meeting on September 7th, one firm as an 8-runner race priced up to 123% and a 17-runner affair priced to 159% and it’s not easy to win with those figures. Clearly, you’ll call a few wrong with such an approach but long-term it should pay off.

The Punting Confessional: The Price is Right?