When I first got into racing seriously way back when, I remember being absolutely death on horses with temperament, writes Tony Keenan. High head carriage, tail flashing, hanging, you name it, I wanted to be against it and lord help anything wearing blinkers as I subscribed to the old belief that they were the badge of a rogue. My attitude has softened somewhat since (though not totally) as I have realised that like most things in racing, the use of headgear is far more complicated than that though the universal truth that horses in headgear win less and are generally worse bets than those without still applies.

The table below covers all Irish flat racing from 2010 to 2018, turf and all-weather, a total of nearly 10,000 races and is broken down by different types of headgear. Unless otherwise stated, all figures in this article refer to that nine-year period.

Different headgear is used for different reasons: blinkers, cheekpieces and visors typically used to sharpen horses up, hoods often intended to have the opposite effect and settle a buzzy type. They are used on all sorts of horses too, among them lazy horses, out-of-form horses, temperamental horses and keen horses and can on occasion have a transformative effect.

For the purposes of this article, I decided to look at how the main Irish flat trainers (and by ‘main’ I mean the 30 trainers who have had most runners on the level this decade) tend to use headgear. I won’t bore you with the full 30 trainers but below are the top five and bottom five along with other relevant people in order of how frequently they use headgear. 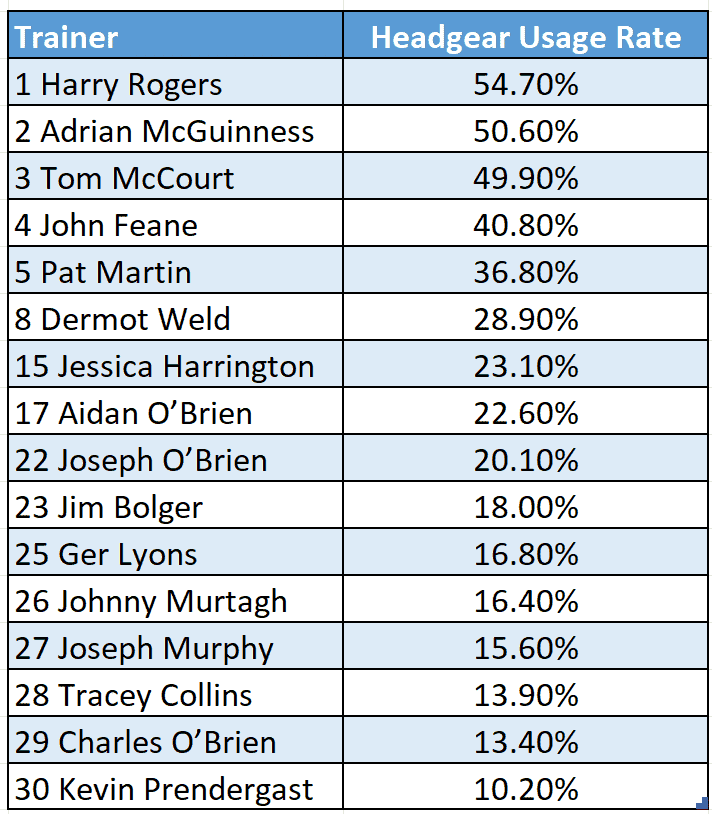 The top five would all be regarded as mainly training handicappers and with such horses small margins matter; a little tinkering around the edges with headgear, trying something new here and there, could make the difference between getting a win out of a horse in a season or not. Dermot Weld stands out as the main user of headgear of the bigger yards with most of the other major trainers in the bottom half of the table, Kevin Prendergast someone who seems to avoid using equipment like this if possible.

Trainers often have strong preferences one way or the other about which headgear they use and during the rest of the article I’ll go through the main four headgear types (blinkers, cheekpieces, visors and hoods) and look at who does and doesn’t use them. Just because a trainer uses headgear a lot, it does not mean that they are successful with it; I wonder if, like doctors who tend to prescribe the same treatment when they see a certain set of symptoms, trainers too have their default or ‘go-to’ headgear.

Dermot Weld is a prolific user of blinkers considering the make-up of his stable, if not a particularly discerning one: his overall win strike rate and actual over expected are 16.9% and 0.85 respectively in the period covered but they drop to 11.6% and 0.68 with the blinkers. He basically never uses cheekpieces with just two winners and four places from 36 runners though Falcon Eight did improve on that record at Sandown last weekend.

On the other hand, Andy Slattery is someone who seems to manage both volume and efficiency, returning a high actual/expected despite running lots of horses in blinkers, though a lot of that is down to his stalwart Ucanchoose who has won seven times wearing that accessory. When his horses take to blinkers they really take to them though and Cityman is one that has improved for their application lately.

It is interesting to see both Johnny Murtagh and Michael Mulvany both have good actual/expected figures considering how sparingly they use blinkers while it also worth pointing out the negatives, the following yards having sub-0.6 actual/expected numbers in blinkers: John Murphy (0.6), Kevin Prendergast (0.58), Pat Martin (0.58), Pat Flynn (0.5),  Andy Oliver (0.34) and Tracey Collins (0.27).

Kevin Prendergast clearly won’t even let cheekpieces into his yard, having not run a single horse in them since 2010, while it is interesting to note that both Slattery and Weld, who use blinkers regularly, rarely go for this piece of kit.

Michael Halford is just outside the top five in terms of cheekpiece usage rate at 19.5% (versus using blinkers only 4.0% of the time) and several of his better horses in years past - like Quinmaster, Russian Soul, Hujaylea and Invincible Ash - ran in them.

Adrian McGuinness uses blinkers an awful lot but his record with cheekpieces is much better; with blinkers he has a win strikerate of 6.4% and an actual over expected of 0.65 whereas with cheekpieces he is 11.6% and 1.11. Saltonstall – previously a high-class handicapper with Halford – seems to have come back into form for the cheekpieces on his last two starts.

The visor is much less extensively used than either blinkers or cheekpieces and I didn’t include the bottom five here in usage rate as some trainers don’t bother with them at all; the likes of Jim Bolger, Ger Lyons, John Murphy and Andy Slattery have never used them in the period covered.

Like the visor, hoods are still not all that widely-used but Edward Lynam is a name that interests me here as the hood is the piece of headgear that his horses run best in; his actual/expected rates with blinkers, cheekpieces and visors are 0.63, 0.74 and 0.45 respectively which jumps to 1.03 with the hood. That would fit with his reputation as a trainer of sprinters.

Garvan Donnelly is the name that doesn’t make the top 30 Irish trainers in the period covered but he does well with his hooded runners (10 winners from 85 runners with an A/E of 1.2) while last mention must go to the blinker king Andy Slattery whose horses have not responded well to the hood (1/41 with an A/E of 0.21).