As regular readers will know, the habits of trainers are of unending fascination to this website and its writers. In this post, we'll consider a generally overlooked angle: the performance of trainers with their first and, particularly, second time starters.

Some handlers have their newbies primed for a big run first up, while others prefer to take their time. So who are the pick of the peer group in each category, and how can we best utilize this knowledge?

A word on the 'method'

Before we attempt to answer that question, a word on the approach. As with all types of horse racing form study from a statistical perspective, our world is imperfect, mainly because there are insufficient data upon which to pontificate. The below is thus afflicted by this issue but should still provide food for thought.

Note that you don't need to be interested in this section to get value from what follows, but for those who are interested in such things, these details flesh the skeleton.

I want to look at trainer performance relative to their overall figures for both win strike rate (expressed as Impact Value, a comparison of the relative frequency a trainer does something (in this instance) versus how often it happens overall), and punting utility (expressed as Actual vs Expected, a measure of the value of those occurences).

The sample is made up of British flat races (turf and all weather) from the beginning of 2014 to the end of 2015. First up, let's get some control figures: overall numbers against which to compare all trainer-based subsets thereafter.

There were 12,586 winners of 12,566 races during the two-year period, which the speedy amongst you will have figured is due to the presence of twenty dead heats in that time. The races were contested by 112,780 runners, giving us an overall win strike rate for all races of 11.16%.

But this is not enough. Indeed, it is not really much at all. We are almost all punters, so it makes sense to look at value, too: actual vs expected will give us what we need. (For an explanation of actual vs expected - or A/E for short - and Impact Value (IV), scroll down to 'A Measure of Utility' in this post).

The overall A/E for the sample is 0.86, where 1.00 equates to a 'neutral value' position. (Note, 0.86 does not imply a loss of 14%. Rather, it is a value index which tries to accommodate the 'future repeatability' of that which it is measuring in its output).

Let's now look at individual trainer performance during the sample period where, to be considered, a trainer must have saddled at least 100 runners.

256 of them met that criteria, with 149 winning at less than 11.16% and therefore having an IV of lower than 1.00. More materially from a betting perspective, there were 38 trainers whose overall A/E was 1.00 or greater. Remember, the higher the number, the more value is perceived in the data.

In an ideal world, we want a high strike rate and a sustainably profitable bottom line. That is to say, we want a high A/E and a high IV. Predictably, this is the easiest combination for the market to detect, meaning that sooner rather than later the available odds in such cases depress even if the strike rate remains constant. Thus, the value is squeezed out of the angle.

Happily, there are always new trainers - and current trainers adopting new techniques - which means that there is always the prospect of remaining half a stride ahead of the bookmakers.

The below table shows those trainers whose A/E and IV were both 1.10 or higher overall, meaning both a healthy relative strike rate and 10% or greater value projection.

Notice that it is possible to have shown a loss in the sample period and yet still be projected as value going forwards.

These data are interesting of themselves, and mark out the likes of Neil Mulholland, Garry Moss, Lucy Wadham, Ian Jardine, Brendan Powell, Peter Charalambous and John Gallagher as worthy of note under the right circumstances. What we'll see shortly however, is that those circumstances do not equate to first and second time starters. [Such knowledge offers an even greater opportunity to profit from their runners when favoured setups do apply].

Looking only at those trainers with twenty or more first time starters in the period, top of the pile in terms of win strike was Saeed bin Suroor with a spectacular 24.66%. But those winners equated to an A/E of just 0.98, meaning his newbies actually won a smidge below market expectation. In other words, everybody knows the Godolphin trainer's first-timers are well drilled and generally 'expected'. The value has been sucked from this group as a whole as wagering propositions.

Compare that with Martyn Meade, a (still) under-rated Newmarket trainer with some smart animals in his care. His five winners from 41 first time starters had an IV of 1.56 (i.e. won 56% more often than the general population of first time starters) and an A/E of 1.44.

Sample sizes are generally pretty small, so caution is advised, but there are some playable stats right here.

Much is in the public domain with regards to trainer performance with debutants, whereas there is far less market subsumption in the realms of second time starter records, as far as I can tell. This notion appears to be supported by the appearance at the top of the 2nd time out charts of some seriously big hitters in the training ranks.

This time, the overall win strike rate for second time starters is 13.4% (IV 1.00). But look at the strike rates of Luca Cumani (31.94%), Charlie Appleby (29.02%), and Sir Michael Stoute (26.17%). Hugo Palmer is another emerging force here, among some lesser names whose recruits step forward markedly for the experience - and often the education - of a prior run.

There is a lot to get guardedly excited about here, as it is apparent that some handlers' ability to coax maturity from first to second run has been largely overlooked by the market. You don't really need me to draw inferences by now, with the below table speaking for itself. For those taking time to mull it, there should be rewards forthcoming.

That said, a couple of handlers well worth a mention are David Evans, whose one-in-six win rate (and perfectly symmetrical one-in-three place rate) with second timers has been worth a chunky dividend; and Karl Burke, whose once-raced brigade make their mark almost a quarter of the time.

Bringing It Back Together

What I really wanted to do here was to compare trainers' first run stats with their second time figures to see if there is anything interesting to be gleaned. My interest was piqued in this by the surprisingly strong second time performance of 'Filthy' Luca Cumani and Sir Michael Stoute.

I've watched the "do not use the whip at any cost" rides many of Sir Michael's horses have received on debut and, as can be seen above, there has been vindication of the visual perception in the data. That was the seed from which these ramblings germinated.

At the foot of this post is a big table, which has some additional columns that require explaining. The table shows the 2nd time out performance for the 93 trainers to have had at least twenty 1st and 2nd time starters in the sample period.

The table is sorted by trainer, with the following columns bearing explanation:

A/E Diff - The A/E differential against the trainer's overall A/E figure. That is, do a trainer's runners offer more (or less) value first time up than overall? And, if so, by how much?

A/E Diff 1TO - The A/E differential against the trainer's first time out A/E figure. That is, do a trainer's runners offer more (or less) value second time up than first? And, if so, by how much?

Again, readers can draw their own conclusions from the table. However, an example may help to get the ball rolling...

Charlie Appleby wins 1.39 times as often with second time starters than his overall strike rate. Moreover, his once-raced entries score almost two-and-a-half times (2.47, to be precise) as often as his debutants.

Charlie's 2nd timers have been marginally profitable to follow as a group (SP P/L of +3.19), and their value - as gauged by A/E - is higher than overall (0.17), and notably higher than first time starters (0.32), from the same stable.

We can say fairly confidently that Charlie Appleby's horses come on considerably for their first run, as a rule. However, there may be little of punting utility in this example (unless you are a layer of Appleby's newbies).

Names to note: Based on the sample period, trainers whose horses have notably stepped forward from first to second run - and can reasonably be expected to continue doing so - include Michael Bell, Karl Burke, Keith Dalgleish, David Evans, Rae Guest, and Hugo Palmer.

The full table is appended below.

Geegeez Gold records the two year trainer performance for a range of subsets, including 1st start, 2nd start, distance move, last time winner, 1st handicap start and 2nd handicap start. This data is provided inline in the racecard as well as in its own report. 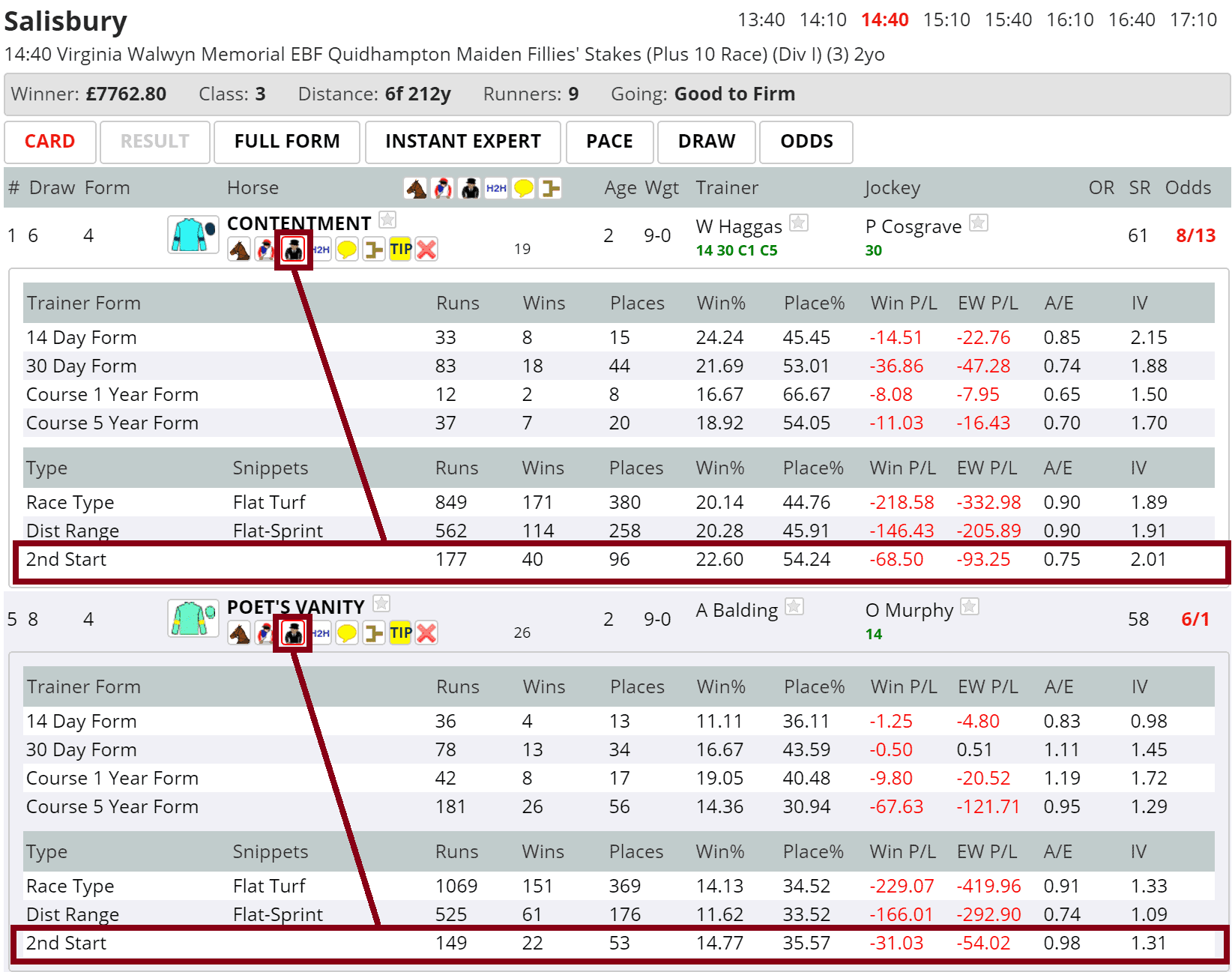 Interested readers can take a 30 day trial of Gold for just £1, here

p.s. what stands out from the data for you? Leave a comment below and share your thoughts.