It's the eve of the two concurrent midsummer 'G' Festivals, Glorious Goodwood (as was. did you notice how inglorious the weather was once the name changed to the Qatar Goodwood Festival? Surely not coincidence!) on the rolling Sussex Downs, and the opening day of Galway's marathon week-long session in the west or Ireland. To emerge victorious from festival meetings at such quintessentially quirky configurations as these requires more than a 'mere' understanding of the form. Preparation for those serious about the week will start with an awareness of the layouts of the circuits and the implications on race shape.

Draw is rarely as simple - and occasionally not as complicated - as the pundits will tell you in their one line summaries. Let's review the courses.

These are Goodwood's helter-skelter pistes:

If you're confused, you'll not be alone. There is a tight right-hand loop, and a straight of a little shy of half a mile from which point the run in is pretty much all downhill - having been largely uphill to the turn.

Goodwood is a front-runner's track for a couple of reasons. Firstly, when horses get to the turn into the straight, they tend to fan wide, giving up ground, just at the moment the pacemaking railer is stealing a length or two. Secondly, horses held up for a later run often get caught in a pocket, with the far rail of the home straight cambering away from the grandstands.

Indeed, only one horse with an actual draw (i.e. number of stalls from the rail, after accounting for non-runners) higher than 13 in a mile handicap has managed to win at Goodwood since 2009. 107 tried. [Laa Rayb, the 2009 Totesport Mile winner, had an advertised draw of 15, but in fact broke 13 from the rail due to two non-runners inside him; it was Inside Story, from stall 16 of 16, who overcame the near impossible two months prior to Laa Rayb's more famous, but marginally less challenging, exploits].

The place to be, to a lesser or greater degree, is low and front rank, from seven furlongs to a mile. And yet... over nine furlongs, the bias shifts to high drawn horses who are waited with.

Wait. What?! How can the whole draw/pace bias be shifted on its head?

A theory, and only that, is that at this rarely raced intermediate distance - neither a mile nor a mile and a quarter - that starts with a stiff uphill climb, milers race too freely and run out of juice while ten furlong horses get outpaced before staying on late. As convoluted as it sounds, it may just be credible!

In handicaps over ten furlongs, in fields of 14+ runners (the race type and field size used for all of the above commentary), there seems little to no bias. Here they travel uphill for slightly longer, then take the outer loop - with its sharp top bend - before freewheeling down five furlongs or so of home straight. There is more time for jockeys to manouevre their horses to where they want them, and it seems a fairer track.

Most of the rain forecast has now been deposited and the going remains good, good to firm in places, so the draw data above ought to largely hold up...

Meanwhile, across the Irish Sea in Galway, there is a race for every racehorse. The programme covers the whole gamut from two year old maidens to exposed handicap chasers. Of course, we'll focus our attention on the flat handicaps. The layout is a little more straightforward here: a little, though not a lot...

Shaped like a diamond, features of the mile and a quarter Galway oval are sharp turns, undulations, and a stiff uphill quarter-mile run to the finish line. There is a shortish run from the seven furlong start to the first of two bends, both of which require wider drawn runners to either take back and wait or risk conceding ground on the turns.

Here is a snapshot of how draw and pace impacts the ability of horses to make the frame in Galway 14+ runner seven furlong handicaps. 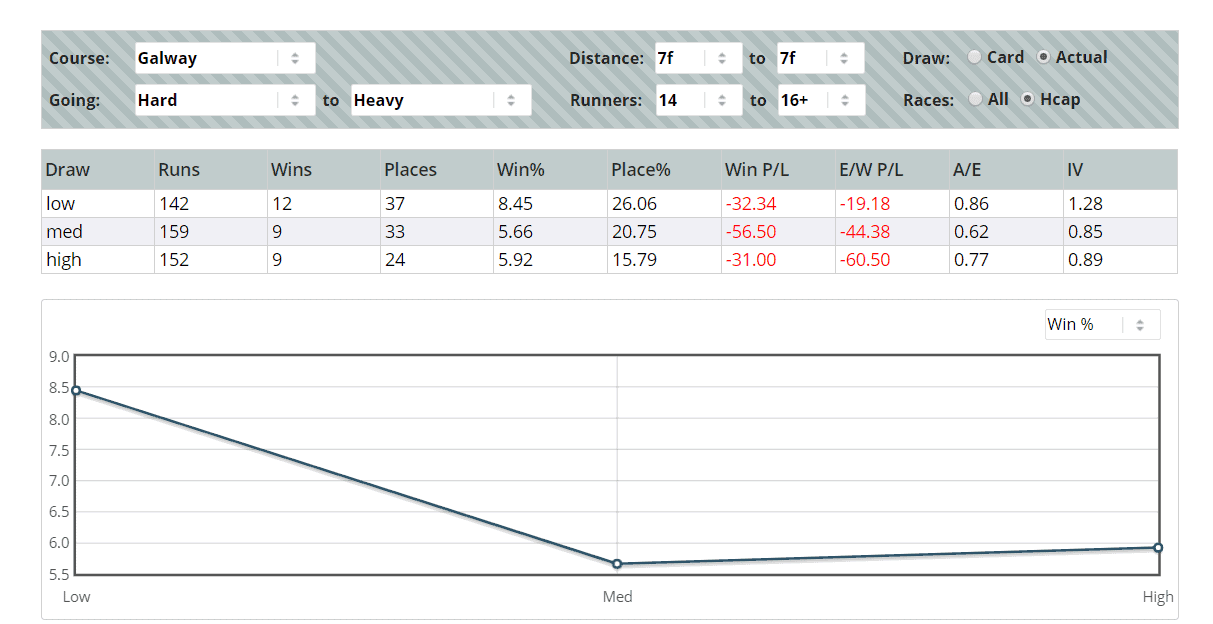 And take a look at the draw and run style in combination for some real takeaways: 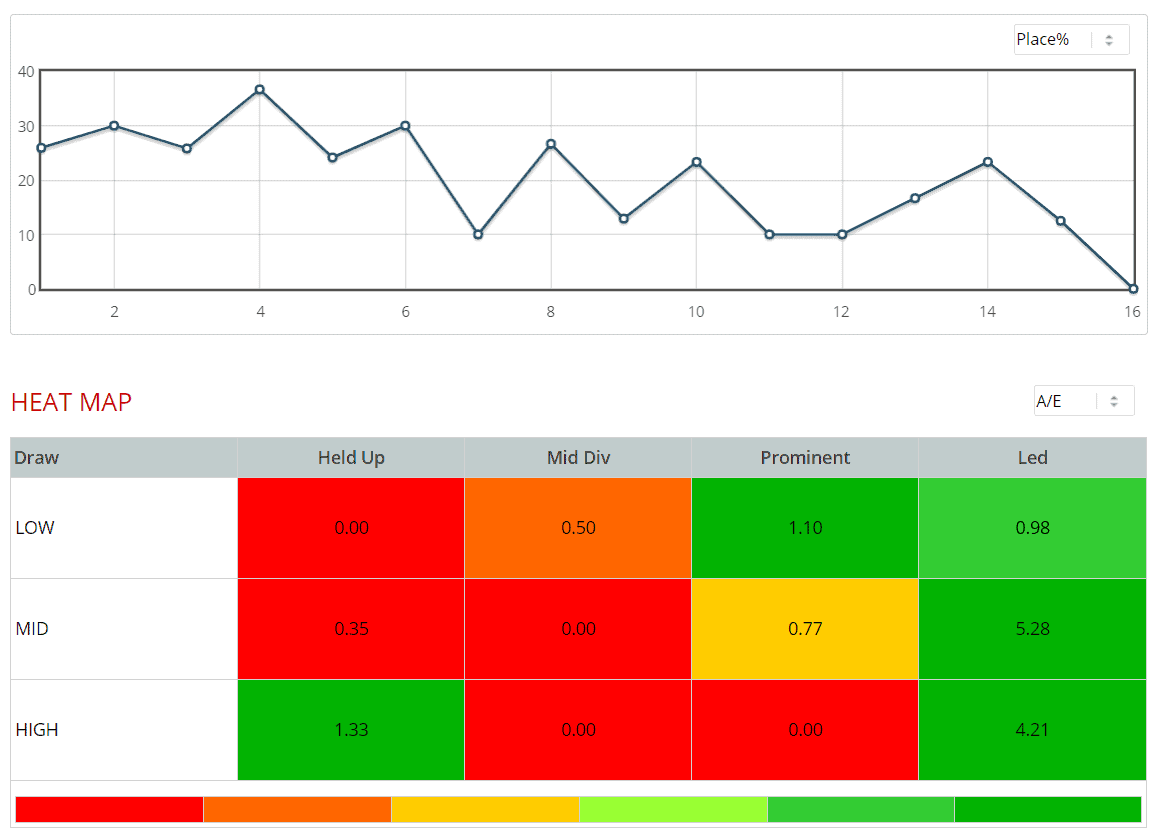 Correlation between draw and place chance; more pronounced, however, is the link between run style and post position

The first chart shows a fair linear correlation between stall position and ability to make the frame; but it is the heat map which interests more.

This is showing Actual vs Expected (see A/E in the dropdown top right). As you'll see on the right hand side, horses that can get to the front outperform market expectation regardless of stall position. We then have a gradation of colour from dark green (led) through amber (low mid div and middle prominent) to red (pretty much everything else). Except...

Look at the bottom left square - horses draw high and held up. On a reasonable sample of 66 runners (seven wins, 13 places) these waited-with types have fared a lot better than the betting public expected. This is most likely due to a perception that their draw cannot be overcome, which inflates the available odds. And, when there is too much pace on the front end, those ridden more patiently (and having to travel less wide due to the strung out nature of fields in such a context) can skulk through to pick up the pieces, granted the necessary fortune in running.

Also noteworthy is the lamentable performance of low drawn hold up horses. Such runners are 0 from 30, three places, in 14+ runner handicaps here since 2009. Those who race mid-pack are 1 from 85, 12 places (14% place rate), and can also generally be discounted.

Meanwhile, over a mile and half a furlong, the main note regards pace and hold up horses. The slow starters tend to be too late finishers, collectively recording a lamentable six wins from 216 runs in handicap fields of 14+. As you can see, it doesn't matter where they're berthed either. Alongside the 2.77% win strike rate is a 13% place record, so the message is clear: look elsewhere. 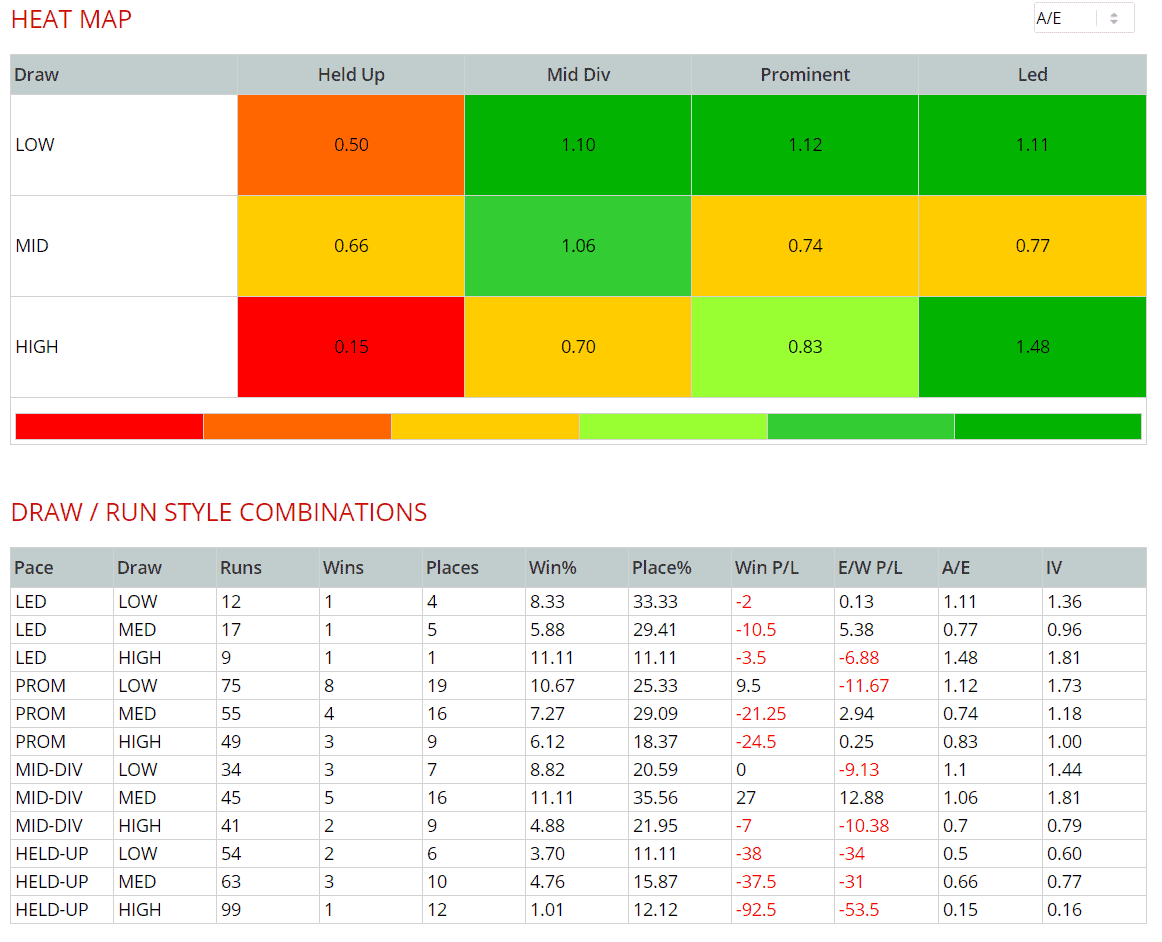 Horses which were held up were generally delivered too late, and are worth avoiding. Luck from mid-pack is needed over 1m 1/2f

Keep these specific pointers in mind and you'll have a leg up on the vast majority of punters at next week's 'G' Festivals. And if you want this kind of intel for all flat courses, distances, goings, field sizes and race types, there is only one place to get it: Geegeez Gold's Draw Analyser Tool. If you're not a Gold subscriber, you can find out more about Draw Analyser, and the rest of our form book and tool kit, here.