One of my favourite meetings of the year is Glorious Goodwood. Its setting is arguably the finest in Britain, the Sussex Downs providing a quintessentially British canvass upon which to paint the high class action, at what is one of the most casual and 'everyman' of the Summer Festivals.

When the sun shines at Glorious Goodwood, all is right with the world. But still, a couple of extra quid in the pocket upon departure aids the journey home, especially when one's carriage is the seemingly interminable rattler back to Smokey.

The purpose of this post, then, is pennies in pocket. Specifically, its ambit is to review the draw and run style data within the Geegeez Gold database in search of profit pointers.

Much is written about draw biases across the webosphere, though caution is advised due to the partial or parochial approach many authors take to what is a multi-faceted and deeply nuanced subject. Despite its many vagaries, Gold's remit is to present the information in a readily consumable format. We do that through the use of draw, pace, and draw/pace tables and visualations, using familiar colour codes to underpin the raw data.

Before I illustrate the above using Goodwood as an example, a word on how our data is collated.

For draw, we offer two views: 'Card' and 'Actual'. 'Card' relates to the advertised stall number on your racecard, and 'Actual' is real draw position after non-runners have been accounted for. On wet days, when multiple withdrawals have been made, the difference can be significant.

Select going and runner ranges, and choose 'Card' or 'Actual'

The impact of the weather on where jockeys choose to race can also be significant, sometimes completely reversing the established draw perceptions, for example at Brighton. As such, Gold's draw information can be viewed across a 'going' range of your choosing.

Personally, I often expand the going range to be one description north and south of the official going, in order to get a slightly bigger sample size of races.

Finally, the field size can also be tweaked to your preference. Again, if the sample size is small, I'll expand this range in search of more data, albeit with a possible minor diminution in accuracy.

Once the controls have been set - or you can just leave them as the defaults, which pertain to the race as it is defined on the card - you are presented with summary and constituent views of the data, each with its own graph. Here's an example of the summary view, with the graph displaying 'place %'.

Both graphs can be viewed by Win %, Place %, Win Profit/Loss, Each Way P/L, Actual vs Expected and Impact Value. More info on A/E and IV, and how we use it, can be found here.

To ascertain how pace affects a race, we assign a numeric value to each horse for each run. Let's be clear: by 'pace' we are talking about 'run style', and specifically where in the field a horse was in the early exchanges.

In the absence of more 'unambiguous' data, we use the in-running comment from our supplier. The geegeez database goes back to the start of 2009, seven and a half years' worth of data, and covers just over 911,000 individual runs. Of those, we have scored more than 863,000 - 94.7% - of them. The remaining 5.3% did not have clear positional data in the comment.

A dataset of this magnitude offers no concerns about the unscored 5%, with the 95% assumed to be representative of the remainder.

Horses are scored between one and four, as follows:

Despite the fairly crude breakdown, Gold's pace charts are actually incredibly effective at highlighting the shape of the race. For those who like to trade in-running, or 'dob', it is invaluable assistance. For the rest of us, who like to try to find a value winner, we need to consider pace data in conjunction with how run styles have historically fared on a given course and distance.

So we recently introduced 'pace blobs' to our output, to frame the race in a broader track and trip past performance context. Here's how they look...

In this example, it is pretty clear that those racing closer to, or on, the speed have fared best. Although there is a 'natural selection' element at most courses - that is, a lot of bad horses are at the back because they're not fast enough, or not 'expected' enough, to be anywhere else - it is also the case that less can go wrong in terms of traffic problems for a front-rank racer.

This is especially true at Goodwood, where a combination of big fields and a quirky cambered track lead to countless hard luck stories. It's a course where you want to be in front, or circling your field: anything else requires more luck than judgement, and jockeys who win by coming through the pack have given rides that were lucky, not well-judged.

Draw information can offer a real insight into favoured positions within the starting gate, and pace data can shine a light on which run styles are best suited by a particular course/distance combination.

The natural evolution of this is to combine draw and pace/run style data into a single view of the world. The problem with this is that often the sample sizes are small, with the number of race runners, winners and placers being divided by twelve (three draw positions - high, middle, low - and our four pace positions) in Geegeezworld.

So, while this information can be interesting, care has to be taken when the samples are limited. That is why, as well as our 'heat map' view, we also publish a sortable table of draw/pace combinations. Here's an example: 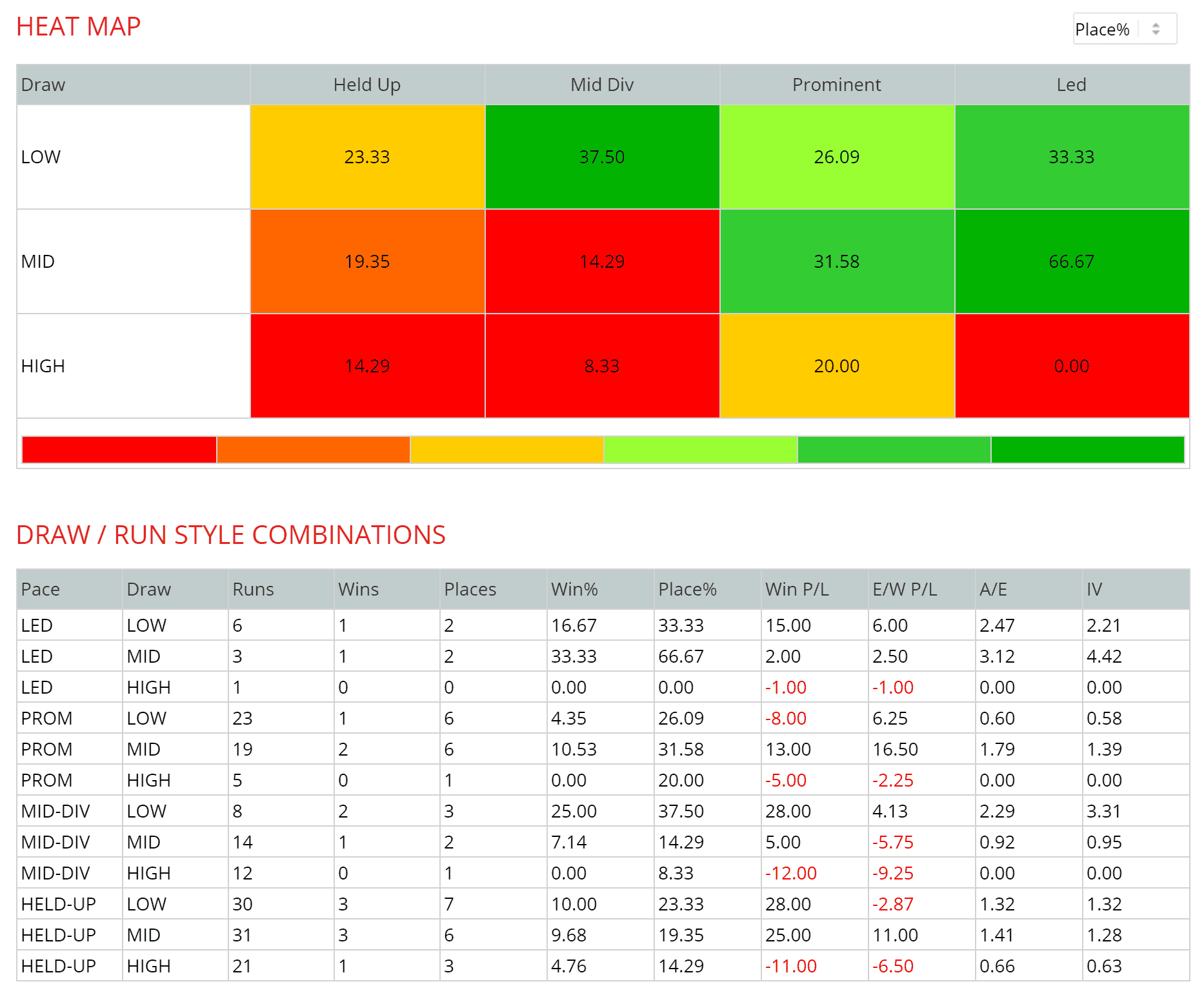 Overlaying run style to draw position can be highly instructive

This example, sorted by place percentages and taken from the five furlong track at Goodwood in races of 14+ runners on good to soft or quicker, shows a general gravitation from low to middle/led (good) to high/mid-div to held up (not so good).

Phew. Still with me? Good. Although this has been a fairly extensive introduction to the actual meat of the post, I think it important to understand from where the numbers come. This helps to decide whether one is happy with their validity as well as with what they are trying to convey. I have personally found these tools to be of enormous utility, having only included draw data by popular demand (i.e. I didn't think it had merit!). That is to say, I am a convert. 🙂

Draw and Pace at Glorious Goodwood

Finally, we arrive at the heart of the subject matter: draw and pace angles at Glorious Goodwood. There was something of a spoiler in the last section when I touched on the quirks of the course, so let's see how the data bears that out.

Front rank is the place to be, with early leaders and those racing prominently in the first furlong or two performing profitably and above expectation.

It's a similar story over six furlongs, though the extra eighth of a mile eats into the 'backability' of those racing prominently but not on the lead.

More of the same at seven furlongs from a pace perspective but, as we move onto the round course - and a fairly pronounced home turn - it is worth overlaying the impact of the draw this time. See the second image below.

Both of the below views - constituent draw and draw/pace heat map - are sorted by place percentage, with the data based on races run on good or quicker, with 11+ runners since 2009. The advantage to low is as emphatic as is the disadvantage to high. Those racing on the lead from a low draw have hit the frame 50% of the time. 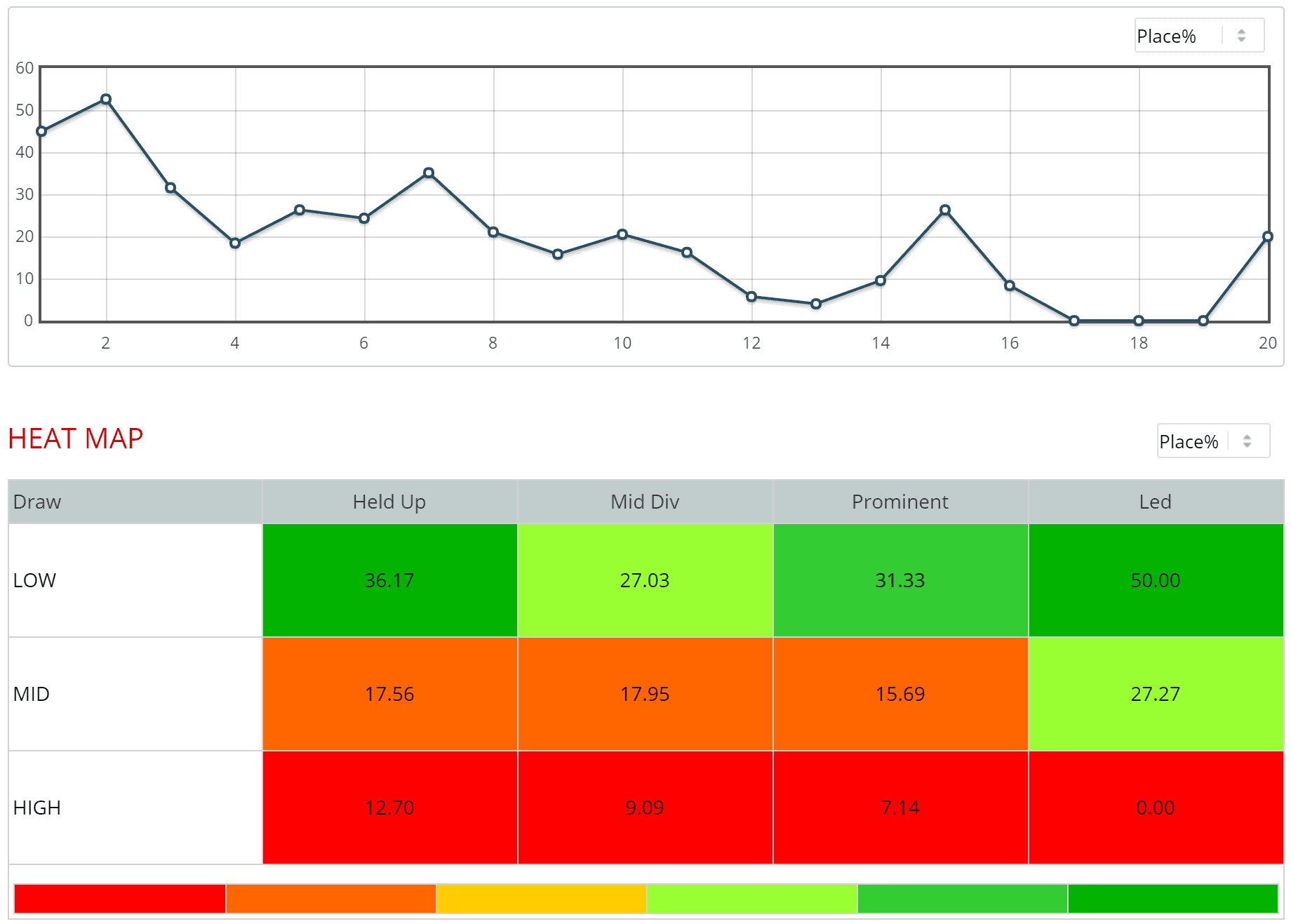 If you want an archetypical example of why a midfield sit is a suicidal manoeuvre at Goodwood, the one mile pace blob view is that. With just four of 139 mid-division racers in the sample able to extricate themselves sufficiently to win, at a lamentable Impact Value of 0.28, these really are a group to avoid like the proverbial bubonic!

(Remember, a point which applies universally to this post, that we only know the 'actual' run style of a horse during and after the race. Sometimes a horse will race in an unexpected position and there's now't much we can do about that. But when a horse has displayed a propensity for a particular run style unfavoured at today's track/trip, avoidance tactics should be deployed, or a healthy chunk on the avaiilable odds demanded).

With just one race run over the nine furlong trip at Glorious Goodwood these days, we'll move on to the more oft-raced ten furlong range...

A familiar story in terms of front-runners performing above random - 53% better in this case - but a profit of just £2.81 means this blob could very soon have a more honey-coloured glow to it.

(Green blobs are achieved by an IV greater than 1.00 AND a positive level stakes profit; Amber is awarded when one of those two criteria are met; and Red is for a double fail on those bases).

It is worth pointing out that midfield racers over this longer trip - with more time get themselves sorted out - have a much higher Impact Value score than at the mile distance. Despite a range of all three traffic light colours in the 1m2f blobs, there is little of punting nourishment in run style here.

The general principle that those racing closer to the pace is maintained at longer distances, though not to any noteworthy degree from a wagering standpoint.

Conclusions, and How To Use This Info

The data show that Goodwood, in common with most tracks, favours front-runners and prominent racers. There are nuances worth considering, and the bias is stronger at some distances - such as seven furlongs - than others.

Clearly, draw and pace are two pieces of a much broader form vista which demands careful study. Gold users have time-saving shortcut tools like the Instant Expert to assist, but regardless of the racecard you use, a holistic approach to consideration of draw/pace framework, as well as horse and trainer form is optimal. But, of course, you knew that already.

With regards to pace, none of the above will be relevant if your fancy is compromised by the run style of others in the race. Specifically, take care backing front-runners when three or more horses like to lead, and generally be apprehensive of later runners unless you can factor their probable track position disadvantage into the odds available. In other words, demand a price!

Good luck with your Glorious Goodwood punting, and I hope the above nudges you to towards a decent winner or three.

p.s. If you're not already a Gold subscriber, you can take a seven day trial - covering all of both Glorious Goodwood and the Galway Festival - for just £1. Click here to start your trial.