Over the past week or two I’ve noticed as I’ve left work for the commute home that it’s getting lighter, writes Jon Shenton. The seemingly everlasting spell of only being at home in eternal darkness is coming to an end: spring is on the way!

It also means that the flat turf season is looming into view and I used the equine flu downtime to do a bit of much needed spring cleaning on my flat systems portfolio. More of that to come over the course of the next few months. Until then, let’s have a brief delve into a few thoughts and potential patterns regarding the spring-time National Hunt game.

Before I start in earnest, it does need noting that the relatively dry winter, coupled with equine flu, means that seasonal based angles may not be as relevant as trainer plans may have been shifted through necessity. Sadly, we’ll only know in a few months, but I still think there is strong merit in finding training operations which typically go through the gears over the next few weeks.

In the spirit of not changing the habit of a lifetime, I’ll kick things off with a massive data table, containing the trinity of A/E, Win(SR)% and ROI. 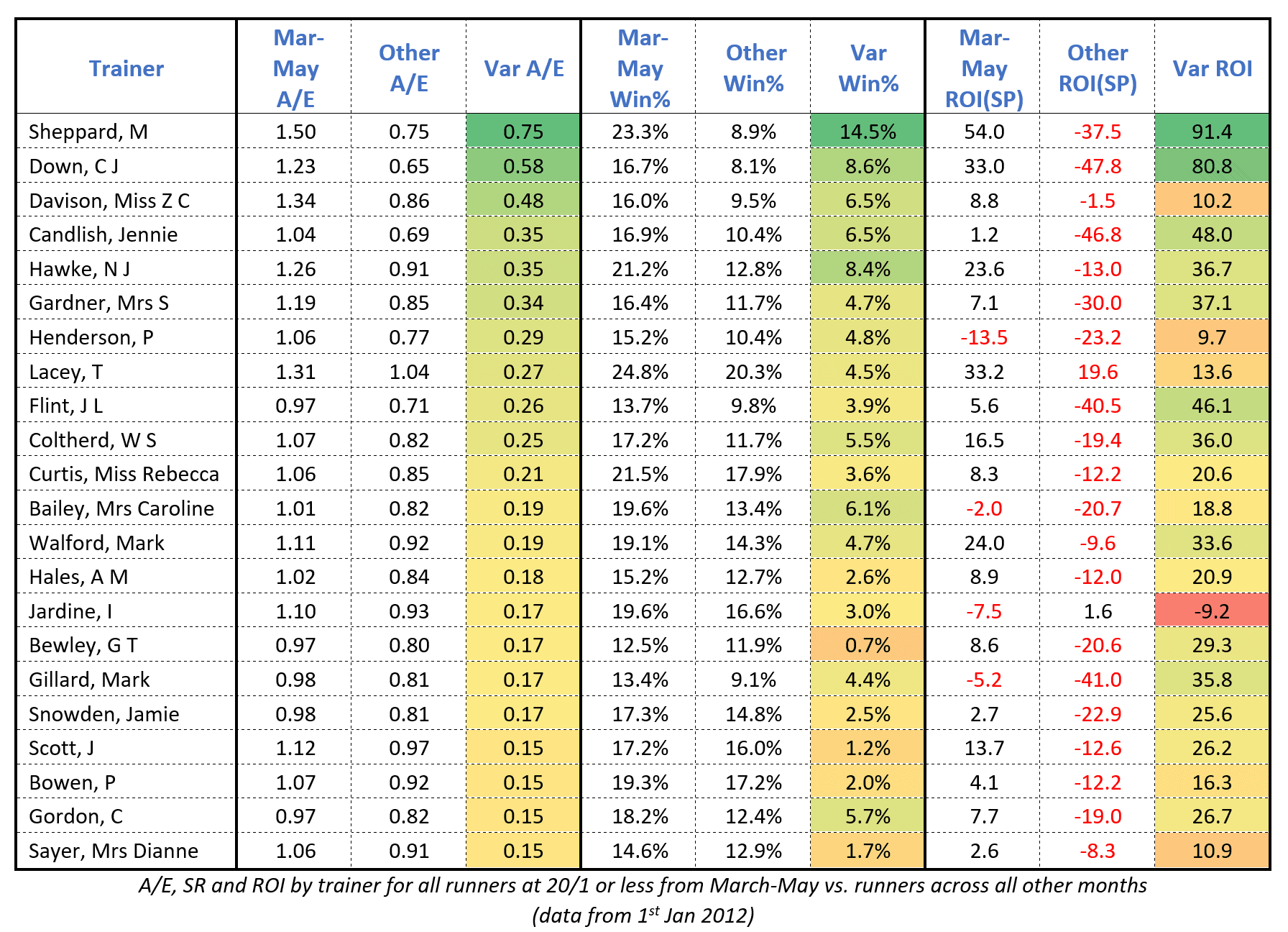 What are we looking at here then? Essentially, this is a table contrasting March-May trainer performance with all other times of the year in terms of A/E, SR and ROI. My usual 20/1 cut off applies (that is, I am ignoring all runners >20/1), and the trainers illustrated all have seemingly strong spring records, certainly in comparison to their performance across other times of the year.

The data are sorted by variance in A/E performance between the March-May period and the other months. I think by showing this contrast it helps highlight those yards truly peaking at this time of year.

For example, Matt Sheppard sticks out like the proverbial sore thumb, with an A/E variance of 0.75, a SR variance of 14.5% and a ROI variance of 91%. At a high level, absolutely everything about these data point towards a promising angle, including the fact that it is another under the radar yard which always comes as a nice bonus.

Here is Sheppard's record from 2012 onwards, by year.

Not many negatives there!

However, there are always a few simple checks to apply, especially on a seasonal angle. A good starting point to achieve that is to check the performance by individual month, hopefully validating that our spring record is superior to other periods.

By splitting out by month we’ve found something potentially of interest. Firstly, the A/E in February is touching 1.8. This was not part of our original data set. The A/E in May is also less impressive (although still very reasonable) in relative terms at 0.97. The conclusion from this is that the radar needs a slight adjustment, potentially shifting to the left of the calendar a tad. Taking account of the February data makes sense, perhaps at the expense of jettisoning May. I’m not willing to expunge that month yet, as there may still be merit in drilling down into the data further.

First port of call for the zoom is to analyse Sheppard’s record by race type.

Striking difference?  I think so.  Look at that chase record in comparison to the other NH race codes. There’s a very strong 37% strike rate, A/E of 2.15 and a return on investment of very nearly 129%. At SP, too, with Betfair SP returns better by another 20 points!

Incidentally the May record for chasers is five wins from 26, A/E of 1.25 and ROI of 38%. Moderate in comparison to Feb, Mar and April, maybe, but still bankable.

The table below shows the February, March, April numbers only, leaving it as your call on whether to include the month of May.

Suggestion: Back Matt Sheppard Chase runners in Feb, Mar, April (and optionally May) at 20/1 or less

It is going to be very hard to follow that angle with something quite as compelling. Still, nothing ventured, nothing gained, eh? Let’s establish a better understanding of the data relating to Chris Down's Cullompton (Devon) yard.

Whilst checking a few contextual pieces of info I noticed something worthy of attention. The graph below shows the volume of runners from the yard by month. That clearly looks like a trainer that gears up for the months of April and May in particular, potentially keeping their powder dry over the January and February period where they have relatively few runners.

There clearly could be a multitude of reasons for this. One logical possible may be that in general horses trained by Mr Down prefer quicker ground than the typical NH animal, hence a focus on spring-time runners.

The table below shows all yard runs since 2012 (at 20/1 or less SP, irrespective of month). Interestingly, 56% of all runners were on ground officially described as good or quicker. This compares to 42% across the whole National Hunt population.

We can look at this in two ways. Firstly, this yard purely gears up for the spring. Secondly, and alternatively, this yard could simply be waiting patiently for good ground and the fact it is spring is merely incidental.

It is probably of limited relevance what the key reason is as the data are clear. However, it’s always of interest and importance to have an underlying logic when selecting or deselecting variables in your search for profitable punting angles. In this case there is a clear demarcation between Good/Good to Firm results and those on the more traditional ground conditions of National Hunt racing; but not enough for an angle.

So, back to the original spring data. The table below clearly illustrates a yard that focuses on competing over the smaller National Hunt obstacles in the main: this is in keeping, perhaps, with horses who prefer faster ground.

NH Flat and chase runners are low in volume and no firm conclusions could ever be drawn on such a small sample size. However, what we do know with certainty is that hurdle performance is strong. We don’t know for sure that NH Flat or chase form would follow suit if we had more data so for that reason I’m happy to exclude them.

There is another factor worth consideration, and it can be of interest with the smaller, arguably more regionally focused trainers such as the Down operation. The table below indicates the results of the yard by general area within the UK.

Evidently, this is a trainer who prefers to keep things close to his Devon base. Performance on the tracks determined as being in the South West is markedly more impressive than the rest of the country. Approximately two thirds of runners are saddled in this region, too, which of course makes sense from a transportation perspective.

For the record those courses are Cheltenham, Exeter, Newton Abbot, Taunton and Wincanton. Although data points are limited, the record in “central west England” (which is to say, Hereford and Ludlow) and Wales (Bangor, Chepstow, Ffos Las) appears to hold up too which makes sense given their proximity to the Devon base of the yard. Whichever way we think about it, runners from Chris Down's stable travelling away from its South West base perform poorly in comparison.

Suggestion: Back Chris Down Runners over hurdles at 20/1 or less where they are running in the South West, Wales or Central West England.

For completeness and perhaps your own manual adjustments here is a table of performance by specific track.

Finally for today, we head to the dual-purpose yard of Mark Walford. Based in York there are approximately 30 horses in training currently across both flat and national hunt racing. At face value, performance on the level is a tick or two behind the performance over obstacles with roughly double the volume of winners in the National Hunt sphere from a broadly similar number of runs. 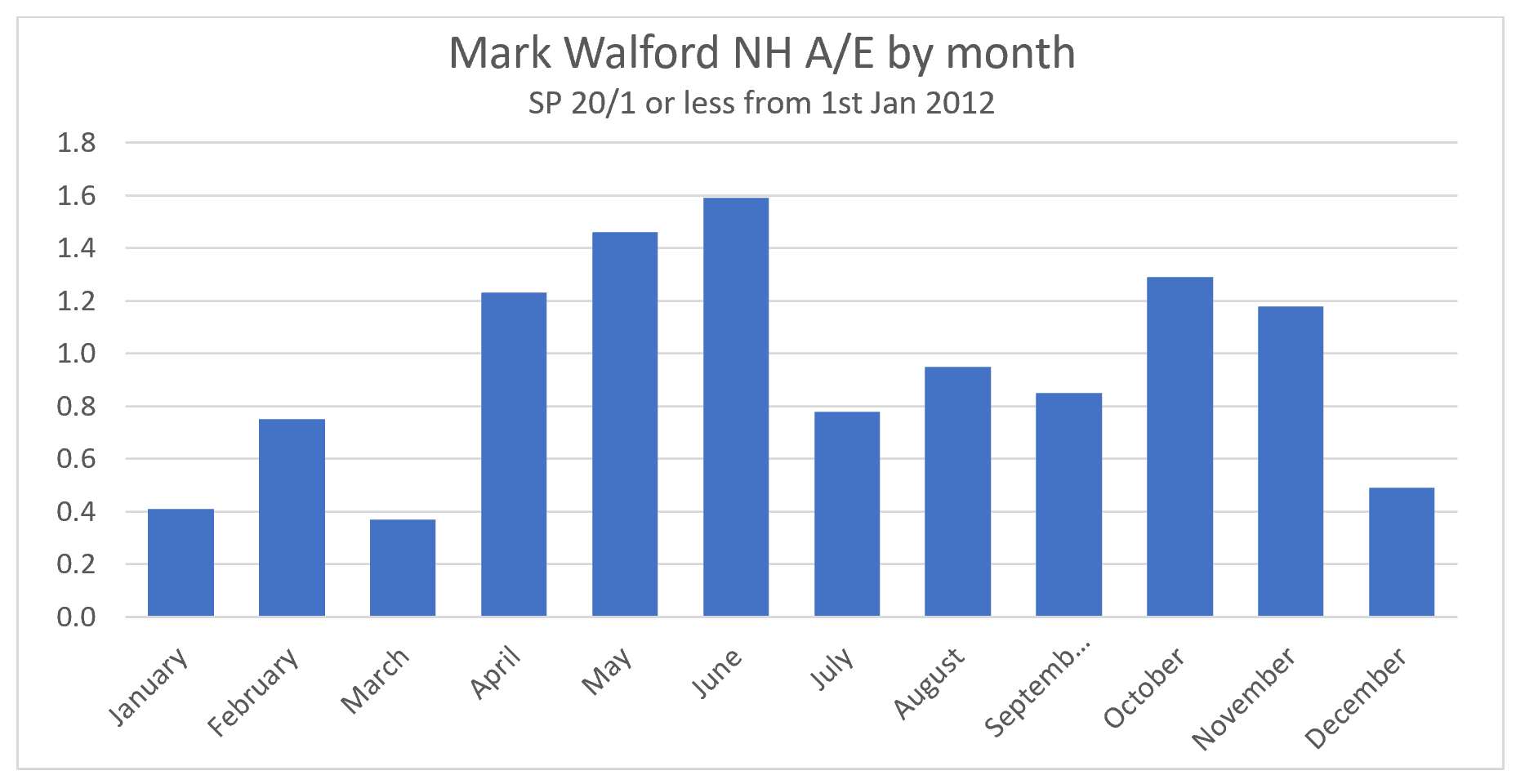 Adopting the monthly split approach illustrates peak performance in April through to June (arguably with an interesting period in the early throes of the NH season in Oct/Nov). This means another radar refinement: effectively ditching March and adding June to the equation.

The official going spread is again of interest:

That’s consistent enough and, angle wise, it doesn’t really change things. I’ve included the table as, like the Down yard, there’s a notably high proportion of runners on good ground, doubtless caused in part by the months in question. I did check if the yard's record on good or quicker held up all year round to see if that was an angle worth progressing but, in truth, it didn’t. In terms of volume of runners, winners, and A/E, the core months of April, May and June are where it’s at!

The data also show us (table below) that the Walford yard is one where horses appear to be better for a recent run.  So, in terms of angle I’m going to tighten it by selecting only runners who have had an outing in the last two months / 60 days.

Suggestion: Back Mark Walford runners at 20/1 or less in April, May and June where the horse has run in the last 60 days

That's all for this edition. There are a few potentially interesting angles to be found when evaluating some of the other trainers on the main list for spring form published at the top of the article. At the very least I think all of these yards can have a small upgrade associated with any of their runners during this part of the season.