A few weeks ago, my last article focused on National Hunt trainers who fly out of the gates in the autumn, writes Jon Shenton.   When compiling data and researching angles for that edition there were a few other areas of interest which I’d like to touch on today.

A key aspect that was considered for the aforementioned piece was evaluating where trainers had a runner returning to the track after an absence of more than 180 days, or about 6 months.  The thinking is that some trainers will have horses wound up and ready to go after a summer absence, while others’ animals generally come on for a run, taking a long-term view of the season ahead.

The below graph shows the total volume of runners returning to the track after a layoff of that magnitude.  Clearly, now is a good time to dive into which trainers are ready to go or otherwise.  As can be seen, we are in peak season for long absence returners.

Graph illustrating number of horses returning to the track after a break of 181+ days, since 2010, by month

My general approach is to always try and provide a few pointers to find a reasonable return over the medium to long term.  However, there is definite value in identifying horses through which to strike a line: data for those inclined to lay in other words.

The first stop is what I’d uncharitably term a ‘bargepole list’. The table below comprises of trainer records in terms of horses making a reappearance after more than 180 days off the track.  50 runs is the minimum level for inclusion and I have sorted in reverse A/E, accounting for all runs from the start of 2010 onwards.

It goes without saying that if you’re backing a runner from these stables under these conditions that you need a very compelling reason to argue against the data. Obviously, it doesn’t mean that they can’t win – and horse can win any race – and, as ever, sample sizes are sub-optimal. Treating all of these stable runners with caution under these circumstances is advised.

The yards contained on the bargepole list are generally of the small/mid-range in terms of size.  Of greater interest may be to evaluate some of the household names of the game with the same conditions applied.  The table below contains larger outfits (100+ runs and not included in the first list above).  All have A/E rates of 0.8 or lower for horses where they are absent from competitive racing beyond the 180 days limit.

*J M Jefferson yard now overseen by daughter, Ruth. It remains to be seen whether she adopts the same patient approach

A lot of these are undoubtedly considered elite level exponents of the training game.  They all will have short priced horses making their seasonal reappearance right about now.   Across the board the win strike rate is a moderate 8%.

On a personal level, awareness of this data has resulted in a modification of my betting habits over the last few weeks.  Sure, sometimes using intel such as this will leave you kicking yourself as you leave a winner out but it’s all about getting a few more right than wrong in the long-term.

Enough with the negativity. Let’s find a few rays of winter sunshine. Using the same 180 days off the track criteria with the addition of only considering runners at an SP of 20/1 or less (to prevent one or two big winners skewing the data) I’ve curated the following, more optimistic, data set.  This time I’ve sorted by ROI: bottom line profit is the ultimate goal after all. To qualify for the winter sunshine list at least 50 runs are required, a minimum of a 10% ROI at SP and a minimum of a 10%-win rate.

A much more interesting set of results for backers, all pretty positive and all worth further investigation.  As usual it’d be remiss not to have a quick dive into the most profitable on the list, in this case the Cotswolds-based trainer, David Bridgwater.

David Bridgwater runners after a break of 180+ days, SP 20/1 or shorter by year

Judged on this criterion, “Bridgie” has clearly peaked between 2013-2015 in terms of volume. However, he still appears to get his horses primed after a layoff these days, just in lower numbers.   Perhaps the increased activity during the peak years were as a result of his stable star The Giant Bolster finishing 2nd, 4th and 3rd in consecutive Gold Cup’s at Prestbury Park, thus raising the profile of the operation.  Delving slightly deeper into the data the performance is strong in the rank and file classes of NH racing (4 and 5), with 19 winners from 70 runs, ROI of 106% at SP. That’s probably an angle to keep in the back of your mind I suspect, rather than to follow blindly.

Picking another yard in a semi-random way (as I have an affinity for them) let’s check the Ben Pauling outfit. Willoughby Court signalled a change in fortunes with regard to my woeful Cheltenham Festival record back in 2017 and I’ve been following them ever since that momentous occasion.  The expanding yard is coming off the back of its most successful season and is clearly going in the right direction.

The beauty (or one of them) of evaluating data such as this is that it can act as a gateway into a deeper understanding of a trainer, generating a different angle or view to what was initially expected.  Let me illustrate:

Pauling’s 25 wins from 100 with a 37% ROI looks overwhelmingly positive (and it is), however, here is the breakdown by month

Look at October in relation to November and December.  They are pretty powerful numbers (small sample small-print applies).  In fact, they’re so powerful I have the strong inclination to check all of Pauling’s runners, irrespective of whether they’ve had over 180 days rest or not.  The graph below shows the split of profit and loss by month for all of the stable’s runners at 20/1 or shorter. 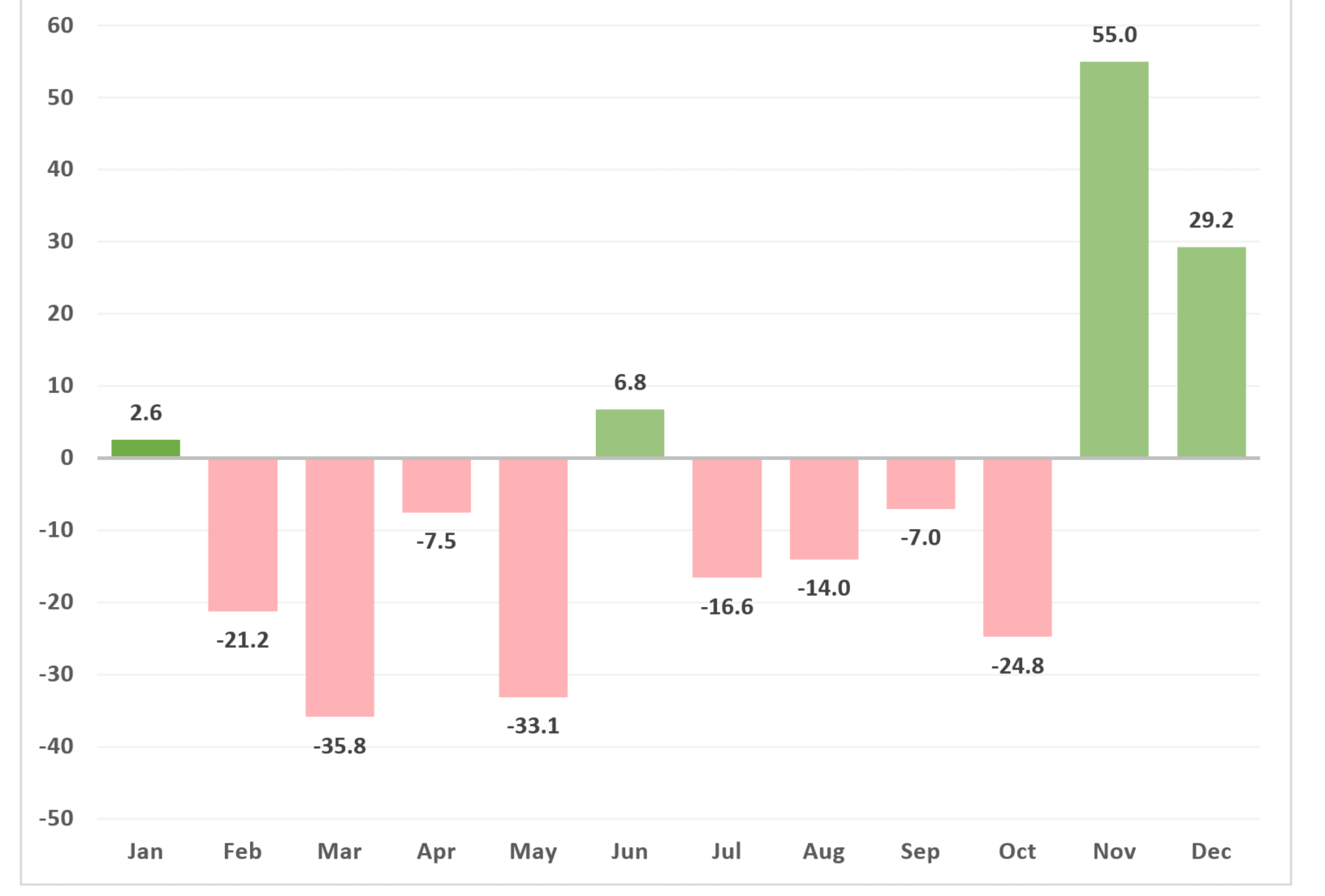 The first thing to say is that the trend from the 180+ data is very much a representation of the whole yard’s performance.  Backing every Pauling entry during November and December appears to be a very promising area in which to potentially invest the kid’s university funds.  The whole stable appears to go into overdrive as we get towards the dying embers of the calendar year.

As a final and potentially arbitrary step, the Pauling record in Nov/Dec with fillies and mares is very poor with just one win from 28 runs.   Checking the overall year-round performance with the fairer sex there have been a skinny 5 wins from 68 runs, losing over 70% of funds invested.  As a result, I’ll happily exclude fillies and mares from the angle: training these has unique and different challenges, so exclusion can, I feel, be justified. That leaves the overall angle performance as per the table below.

Ben Pauling November/December male runners by year with, SP of 20/1 or shorter

In summary, backing Pauling male runners in November and December at 20/1 or shorter returns 51% to SP with a healthy strike rate of over 27%.  Maybe the market is catching up and pickings have certainly been slimmer over the past year or two.   Having said that, the yard is definitely still one to keep close to your thoughts as soon as we move into November.

Another trainer from the Winter Sunshine list, this time entirely based on volume, is Evan Williams.  The Vale of Glamorgan handler has delivered 50+ National Hunt winners every year since 2010 and is on track to do so again in 2018.

There is little doubt that this is an operation that gear themselves to getting horses out fresh and ready in October and November.   Using the P&L graph again, below is the distribution. 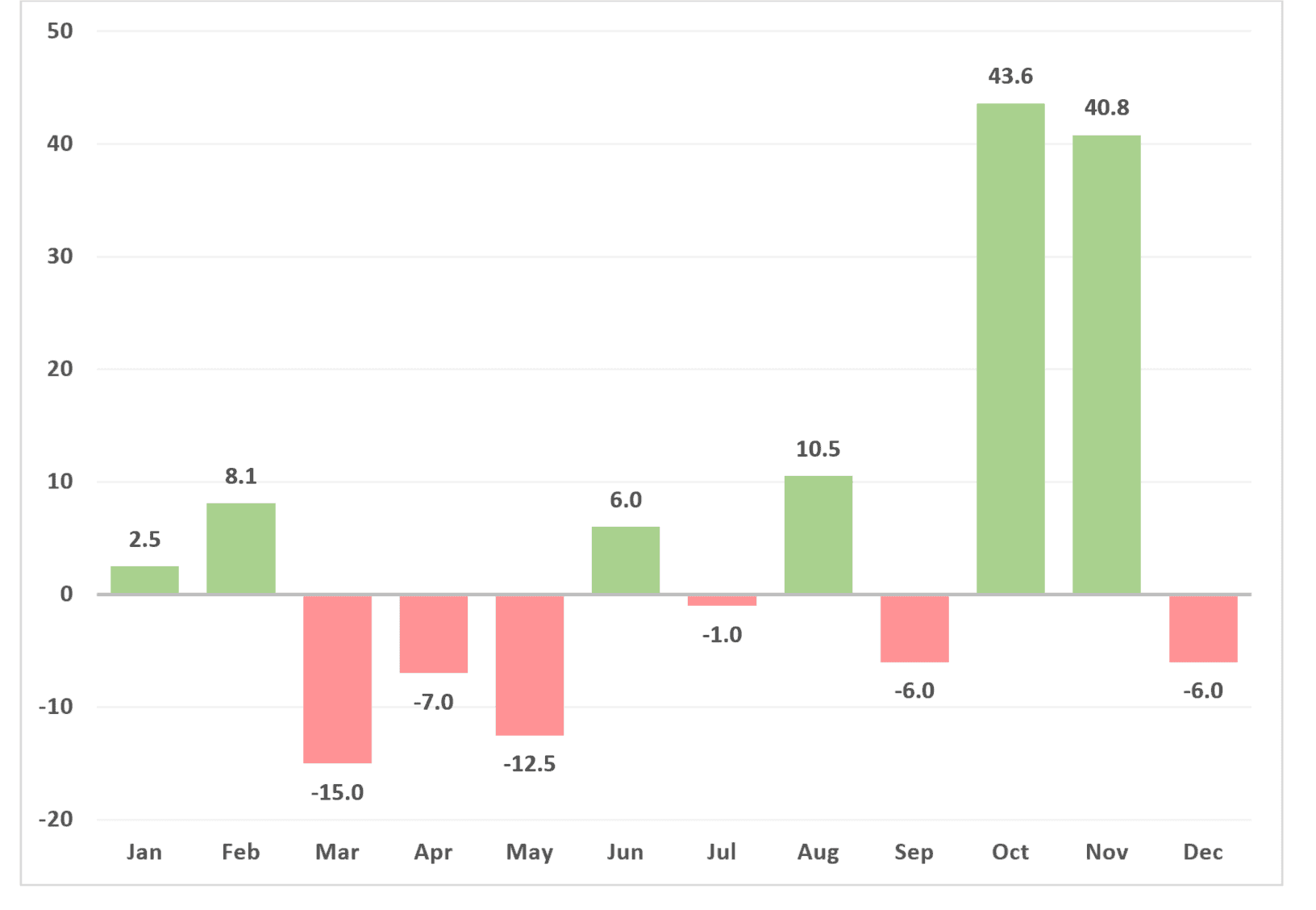 A nice profit has been gleaned in the focus months; unlike Pauling, however, there are other potential periods of interest. Also, whilst the Pauling yard is historically flying with all runners in months 10 and 11 there is a clear distinction in Williams’ stable between fresh and already active animals.

As a result, we only want to consider the fresh horses from the yard, even though performance for the other horses is far from terrible.

If we want to sharpen up further, the trainer hasn’t had a victorious horse at odds of greater than 16/1 from 11 runs in this dataset.  There might be a big one out there though, as always, it’s personal choice in terms of appetite for risk and reward.

In summary, backing all Williams charges with over 180 days off the track in Oct/Nov at 16/1 or less would yield 53% at SP, delivering £95 profit from a £1 level stake.

I’m fully aware that October is in the rear-view mirror in 2018.  However, this year the stable was exceptionally quiet during the month in terms of qualifiers, finishing with a record of 0/5.  My guess would be that the exceptionally dry summer and autumn may be pushing this (and other) yard’s general routines back a few weeks, patiently waiting for winter ground.  If that is the case, then Team Williams may burst into life as the squad start hitting the course over the next few weeks.

Obviously, it doesn’t always work like that, it’s just part of the evolving punting puzzle that we all know and love.