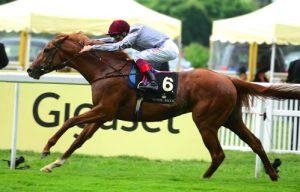 Galileo Gold wins at Royal Ascot. Sectional times tell us how good a performance this was.

One of the more surprising stories to emerge from Irish racing in the past few weeks was a revelation from Johnny Ward of the Racing Post that SIS plan to back the establishment of sectional timing at all Irish tracks from the start of 2017, writes Tony Keenan. This news was unexpected on a number of levels, not least because Irish racing is essentially backward in nature, and whether it comes to fruition or not, be it in 2017 or beyond, remains to be seen.

But I for one would be strongly in favour of not only their use but the idea that they could be widely disseminated to the betting public and it is hoped this initiative is not a pipedream. The reasons why sectional times matter have been covered many times before, and often by bigger and better brains than mine, but even so it is worth restating their benefits here, if only to put my views on record. Much of the focus of these articles is on punting as that is the perspective I feel best qualified to represent but for this one I have tried to keep the focus away from mere gambling and look at the industry as a whole.

The central cog to the sectionals argument, the one that most the other benefits stem from, is that these times allow for much better race reading. Pace is a vital component of any race, as even the most limited club runner who has gone off too fast or finished with running to give in a 10k race can tell you, and the naked eye simply cannot capture as much about pace as a number can. From my own perspective, my understanding of a how a race has unfolded is enhanced greatly by using sectional times to such a point that I now find that my reviews of races without these times are missing something.

There are a number of punters currently either taking their own sectional times or using Timeform’s archive of the same and they have an edge; from experience I can say that sectional upgrade horses are often underbet in the market now. The public availability of these times, and the eventual understanding of what they mean, could erode this edge to a degree but punters who want it to continue as such are being selfish; a strong sport is better for everyone.

Moreover, this sort of data-rich sporting landscape is exactly what the modern fan wants, indeed expects. Analytics may have been born in America with the likes of Baseball Prospectus and Football Outsiders, but such methods are over here now in soccer (yes I do call it soccer) through people like Michael Cox of Zonal Marking; and bringing something similar to racing would surely attract more followers to this most complex of sports.

The fact that a number of racing yards, not least Ballydoyle, already use their own sectional timing in training their horses speaks plenty about how useful they can be and it can certainly help those go-ahead stables in ascertaining what they have from an early stage. This applies on the track, too, where horses like Golden Horn have stood out from an early stage on the clock. So, while it is only one method of talent evaluation and may get horses wrong, it seems as reliable as any purely visual approach: indeed, it would be best if both methods were combined.

If we can understand a horse’s sectionals within overall times we are able to place them in a historical context and get a sense of where they might fit in terms of ability, for instance by looking at all the sectionals at a given track over a period of time. This would not only help punters but also owners, trainers and breeders. The owner might spot an undervalued horse he wishes to buy; the trainer might become better at rating his horses from an early stage and thus place them more appropriately; and the breeder can know what sires or dams might be over- or underrated.

One of more interesting developments in American sports analytics has been the idea of WAR or Wins Above Replacement, a number that rates how superior a player is to a limited (or replacement level) alternative and is basically one of the best ways of evaluating how good a player is. I have a dream that we will one day have a WAR statistic for jockeys that will allow us to properly discuss their respective skillsets and abilities, because so often analysis of riders now boils down to the ‘how many winners have you ridden’ argument.

Sectionals could play a part in this sort of analysis and, over the course of Royal Ascot, they were able to inform on a number of poor rides that the oft-unimpeachable Ryan Moore gave over the few days: importantly, with the substantial logic to back this up. Of course, there is more to evaluating a jockey; these figures would not be able to put a value on how good a jockey is at riding work or dealing with connections or providing feedback on a horse. But to say that such numbers are useless would be as wrong-headed as to say they are everything.

Not only would such times help us to properly rate jockeys but they might even improve race-riding as jockeys become aware of mistakes they are making. Every jockey gives bad rides as race riding is simply too dynamic for anything else, but we have far too much preciousness around criticising them at present. Arming ourselves with the facts and not personalising these critiques would go a long way to building a proper analysis – and development – framework for jockeys.

If sectional times allow us to rate rides better, then surely they can also be used for integrity purposes, providing the authorities with facts and data - rather than the current opinion and conjecture - to support their battle for a cleaner sport. The Turf Club have suffered some high-profile defeats in integrity case appeals this year and it is ironic that one of the central arguments that saw Barry Geraghty and Tony Martin exonerated in the Noble Emperor case came from sectional timing as Donn McClean explained how the horse was making up little to no ground on the winner late on.

It is bizarre that the defendants rather than the prosecution was using this approach and it makes sense that stewards on the track would have access to such data at the time rather than merely after the event, perhaps comparing them to historical events. Rightly or wrongly (and it’s wrongly if you ask for my view), Irish racing has a reputation for skulduggery, a sort of nod-and-wink conspiracy that we’re ok with horses being none too busy. Sectional times could certainly play their part in improving this perception and making our racing more appealing.

There is a sense from some racing people that it’s cool not to be interested in sectional times, or times of any kind for that matter, and it is almost as if the ‘sectionals boys’ are being set up against the traditionalists, much like the scouts and the data nerds in ‘Moneyball.’ Even the term ‘sectional boy’ is dismissive and I find it disappointing that many in the industry, not content with adopting an ‘each to their own’ philosophy, seek to actively block developments in this area.

I am for more and more data and sectional timing is part of this; if you want to know about wind operations and weights of horses then already having gotten the sectional times can only help you get this information. Data begets data. With all this information, people can then decide what they do and don’t want to use; maybe ten-year trends are your thing: if so, good luck to you, I won’t stand in your way.

The establishment of sectional times in Irish racing would demand higher standards around going reports and measurements of race distances both of which are badly needed and could eventually lead to the sort of next level data that makes modern sports analytics so interesting. But only if we in racing allow it…

iesnare Update: Victim Fights Back, urges others to do likewise