Every year during late June, Royal Ascot showcases the very best of British - and, increasingly, global - racing. As well as the heritage, the social aspects and the racing, opportunities abound for colts to advertise their worth as potential stallions when their track careers are over.

Curiously, perhaps, the leading Royal Ascot sire of recent generations never graced the meeting, though he did win the King George and Queen Elizabeth Diamond Stakes at the course a few weeks later, in 2001. I refer, of course, to Galileo, who was between Derby victories at Epsom and the Curragh when the Berkshire jamboree was playing out.

Here's how the sire table stacks up since 2009 (ten renewals of Royal Ascot, and therefore 300 races in total): 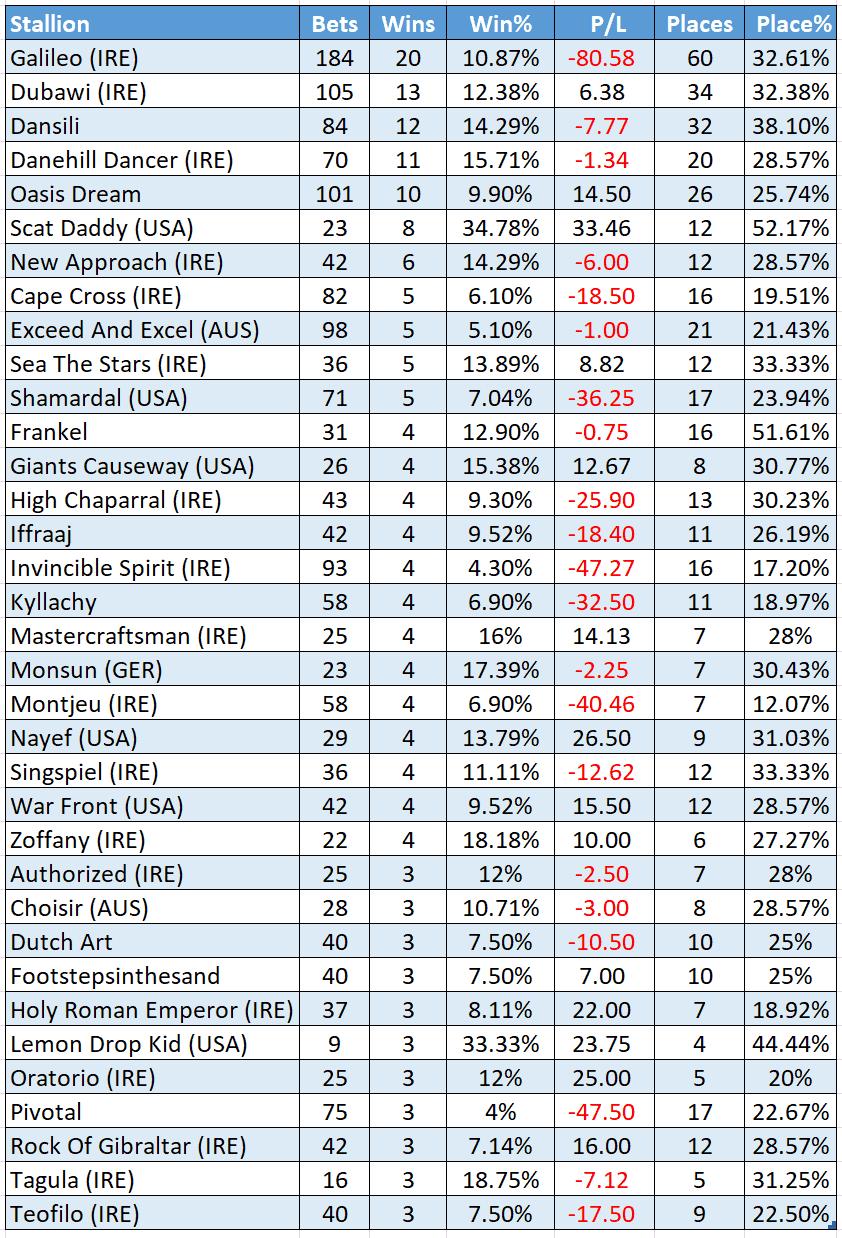 In the interests of completeness, it should be noted that prior to the start of the study period, Galileo was already on the scoreboard with a Queen's Vase winner - his inaugural Royal Ascot stallion strike - courtesy of Mahler in 2007, and a brace of Jim Bolger-trained fillies, Cuis Ghaire (Albany) and Lush Lashes (Coronation) in 2008.

Just a further Queen's Vase victor followed in the next two years before, in 2011, the racing world was set alight by a couple of colts who had met the year before on their respective racecourse debuts. The winner of that somewhat above average (cough) maiden was a chap called Frankel, and he was no more than a half length too good for a lad named Nathaniel.

Both Frankel (St James's Palace) and Nathaniel (King Edward VII) enhanced their burgeoning reputations with wins at the Royal meeting, the unbeaten-in-fourteen-lifetime former enduring the closest finish of his career (debut aside) when less than efficiently ridden to get the better of Zoffany.

The smart filly Maybe also prevailed in 2011, beating the boys in the Chesham, a juvenile race over seven furlongs.

A year later and Frankel was flying the flag for Galileo once more, this time in the straight mile Queen Anne, one of the most exhilarating performances I've ever had the privilege to witness in the flesh. Just a wow moment, even now.

A blank in 2013 was followed by a single in 2014, Telescope bagging the Hardwicke for Sir Michael Stoute.

And then the floodgates opened. Royal Ascot 2015 witnessed a hat-trick for the pre-eminent stallion, courtesy of Curvy (Ribblesdale), Aloft (Queen's Vase) and, most notably one of this year's freshman sires, Gleneagles (St James's Palace).

Two years ago, it was another treble thanks to Idaho (Hardwicke), Winter (Coronation), and Highland Reel (Prince of Wales's); before a double last season in the Ribblesdale (Magic Wand) and, for a fifth time no less, the Queen's Vase (Kew Gardens).

There are a couple of noteworthy sub-texts to the overall Galileo figaro's (sorry, couldn't resist).

Not many two-year-old Galileos are mature enough to race so early in the season but, from the eleven to do so in the last decade, two won (both in the seven furlong Chesham). [NB As mentioned above, Cuis Ghaire also won the six furlong Albany Stakes in 2008]

The bad news for those of us who like to wager is that, no matter how you cut it, there's no profit to be had from this super sire... with one possible exception: Galileo has sired five winners of the Queen's Vase, four at the old two-mile trip and the most recent of the two at the reduced 1m6f range last year. Backing all Galileo progeny in the Queen's Vase would have netted a profit of 30.83 points on 22 bets. Alas, that is all down to a single winner, 33/1 Sword Fighter, and is thus a most unreliable angle for all that a far shorter-priced Galileo may again prevail next week.

Here, the D's are Dubawi, Dansili and Danehill Dancer. Which is actually four D's now I think about it.

In any other era, Dubawi would have lorded it over his progenitor peer group in the way that 'the big G' does. Even in that one's considerable shadow, the Darley flag-bearer wields vast power. His 13 Royal Ascot winners in the past decade is second in the table, yielding a small profit for blind backers (who are these people?).

The battle lines between Coolmore and Darley have been drawn and repeatedly retraced over the past two decades. Evidence exists all over racing's landscape, none more so than in the microcosm of those skirmishes, Royal Ascot.

Dubawi's numerical deficit in terms of winners is mitigated somewhat by a higher winning strike rate. However, just a single Group 1 winner - Al Kazeem in the 2013 Prince Of Wales's Stakes - attests to the gulf in class between these captains of their industry. 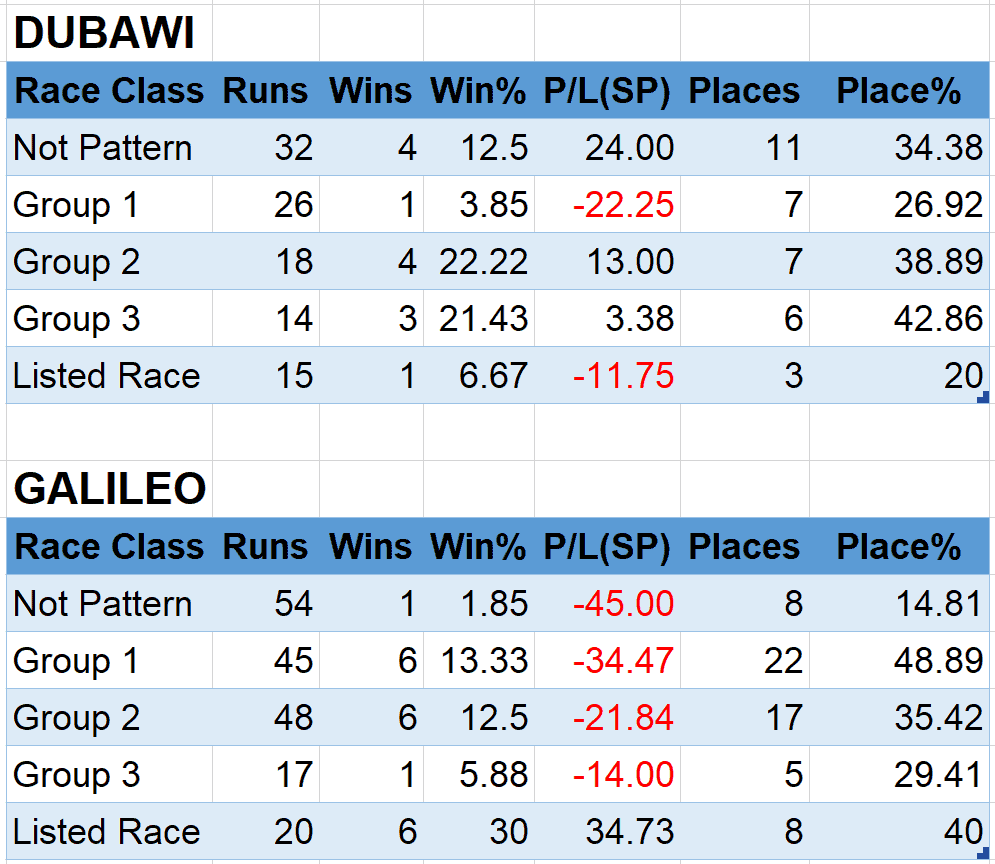 Backing Dubawi progeny outside of the top grade is a no brainer 'in', and it would have yielded 12 winners from 79 bets for an SP profit of 28.63 points (circa 50 points at exchange prices). That said, last year's 1 from 16 (-10.5 points) would have dented confidence.

As an aside, we can see from the above that dodging Galileo's outside of Pattern class (1 win from 54 starters) looks a very smart strategy, his Royal runners seemingly either very good or, well, not very good.

Dansili is perhaps a slightly less fashionable stallion, though clearly one capable of producing smart racehorses: the likes of The Fugue and especially Harbinger were capable of brilliance on their day. From a betting perspective, Dansili has more entries in the handicaps than the aforementioned super sires and that hurts his overall statistics.

Focusing only on Pattern runners, Dansili has eleven winners from 58 runners (+10.23). Again, though, he's 0 from 13 in the last three years, which tempers enthusiasm.

And the D's are concluded by Danehill Dancer, whose strike rate of nearly 16% is impressive. He has very few runners now, having died in 2017 aged 24. Three interesting snippets are that his eleven winners in the past decade include three dual scorers (Qemah, Duntle and Forgotten Voice); seven of the wins were by fillies (Qemah and Duntle two each, plus Osaila, Lillie Langtry and Memory); and eight of the wins were at a mile.

Although the top sires have longevity, all around them fashions change almost from season to season. So it is worth homing in on a shorter time window, in this case the last five years, to see if any patterns are emerging.

King of the hill remains Galileo (14 wins), but Dubawi is joined in second place by Scat Daddy (seven wins apiece).

Again we're in double territory as both Lady Aurelia and Caravaggio notched twice for this very high strike rate stallion who sadly died in 2015, aged just 11.

Shamardal, whose team is headed by Blue Point, and Sea The Stars, captained by Stradivarius, are next best on five wins, with Frankel, Mastercraftsman, Zoffany and Invincible Spirit on four.

Those nine stallions were responsible for 54 of the 150 winners at the last five Royal Ascot festivals, from just 414 of the 2409 runners. That's 36% of the winners from 17% of the runners. 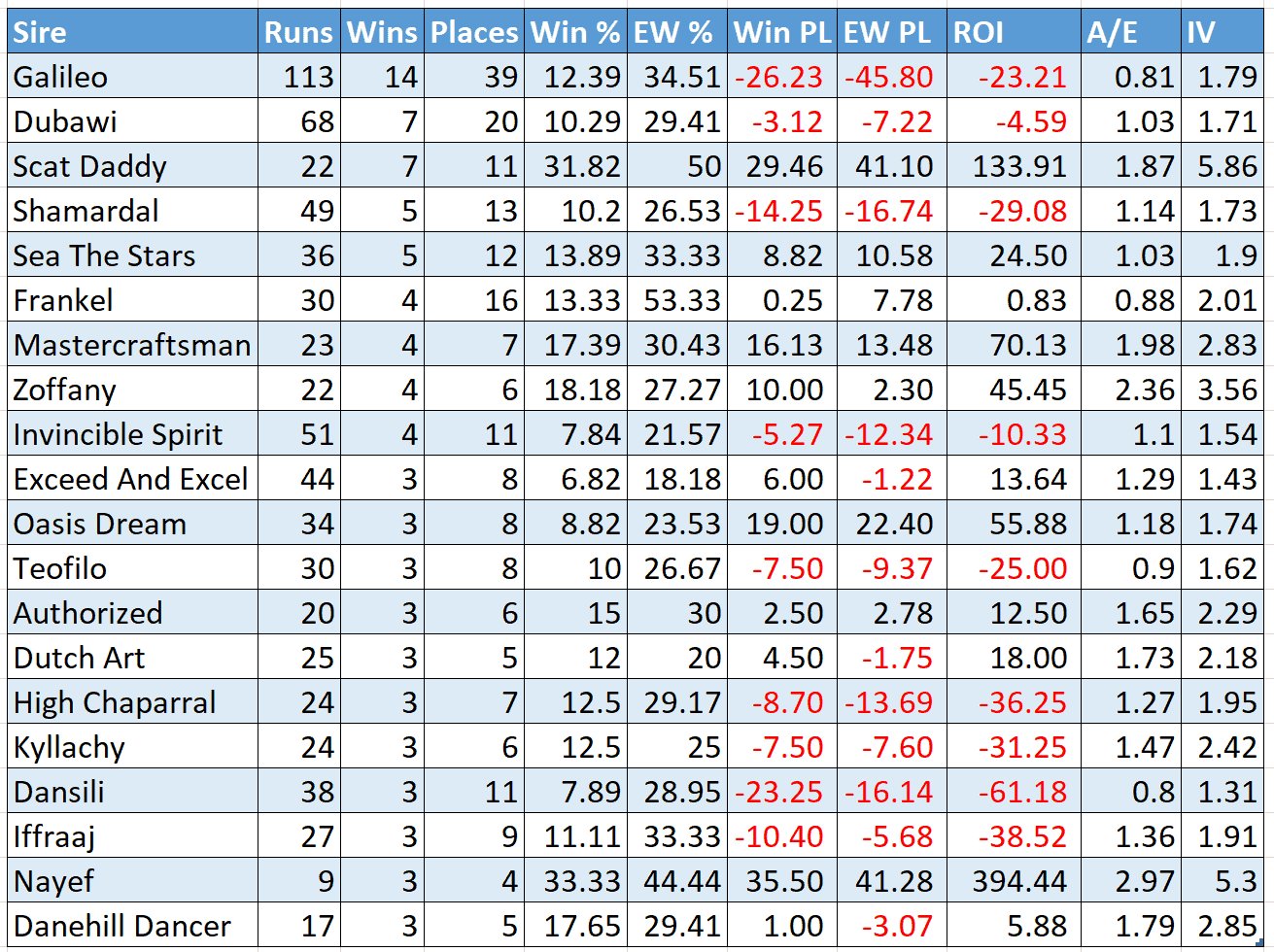 So, in spite of it making little sense to data philosophers like Taleb, we plough on in search of micro angles which may - just may - have some crumb of legitimacy (or luck, the outcome being the same) about them.

To that end, consider the case of Cape Cross, one of the finest stallions of his generation. Three winners in 2011 seemingly heralded the start of a glittering career at the Royal meeting. Another winner in each of the next two seasons kept the dream alive but, since 2014, it's been an unbroken run of defeats, 37 and counting for the Darley A-lister. In fairness, plenty were at huge prices and a couple did run second, but a place rate of 19% is some way below the level of most of those in the table above.

The quartet of Bahamian Bounty (14), Royal Applause (13), Pastoral Pursuits and Dream Ahead (10 each) have failed to record even a placed runner in the last five years.

Any of that might change next week but, on balance, it's better to be aware of such numbers than not. It might save us a quid or two.

Galileo is expected to retain his stranglehold on proceedings next week, though there will likely be little nourishment from a wagering viewpoint. Dubawi, especially outside of G1 class, is worth a look in spite of his clunker last year; and so too may be Mastercraftsman and Zoffany.

To add these to your Query Tool Angles, select:
DATE - Month: June (change 'to' date to 30th June 2029)
RACE - Course: Ascot
RUNNER - Sire: Dubawi, Mastercraftsman, Zoffany (plus any others you like the look of)

As the five day entries come in you'll see potential runners in the Angles tab (when you've selected the appropriate angle); and then from the 48 hour declaration stage, you'll see qualifying runners listed both on your QT Angles report and behind the blue QT Angles numbers on the racecard. See the User Guide for more info.